A work of art is above all
an adventure of the mind.
~Eugene Ionesco
My 17 year old niece Rachel came to stay with me, two weeks ago today. She was attending a 2 week art camp for high school students at U.C.L.A. Her focus was photography. She had some very long days there, including field trips and the daily roundtrip drive to the campus in Westwood.
One of her field trips was to The Getty Center. I had always wanted to take her to The Getty, so I went ahead and met up with her there. She spent most of the time with her class and taking photos for an assignment but we still managed to walk around for a bit together in the main garden designed by Robert Erwin. It was a gorgeous day! (I also made it to the cafeteria for my favorite taco salad!) 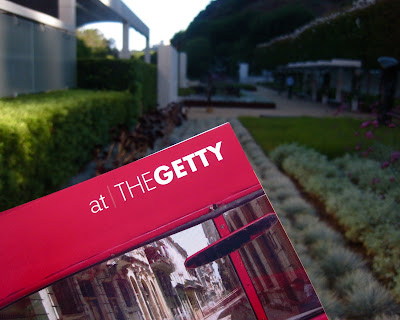 We strolled around some of my favorite little shopping and restaurant areas like Larchmont Village and walked through my neighborhood to get coffees and dessert. We also watched movies. I brought out two movies I love that she'd never seen, Cinema Paradiso and Three Kings and she had me watch Up, (which was great!)
A fun little excursion was our photo expedition on Melrose Ave. Rachel took the photo below (you can see her reflection!) and it became part of her series for the final gallery show the last day of her camp. The title of her series became Too Much Rock for One Tanning Salon. She cracks me up.
Photo by Rachel Herring 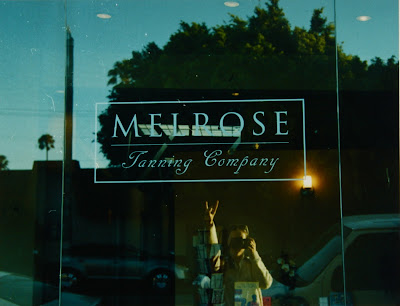 Another night we drove up and down Hollywood Blvd. so she could take pictures. I don't think I have ever seen so many tourists on the Walk of Fame in my life. I took the photo below out the window, while parked in a loading zone, as Rachel was running around trying to photograph "Michael Jackson" in front of the Chinese Theater. Darth Vadar and Charlie Chaplin were there as well!
The Hollywood Roosevelt Hotel, by the way, is where the first Academy Awards was held in 1929 and is said to be haunted by deceased movie stars Marilyn Monroe (who lived there for two years) and Montgomery Clift who stayed during the filming of From Here to Eternity. 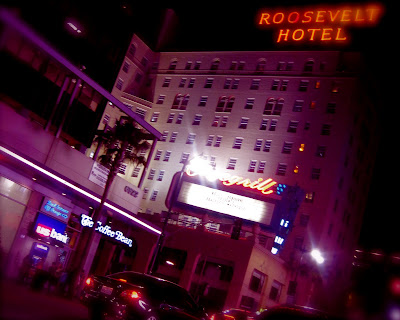 She ran out of film and I handed her my "point and shoot!" 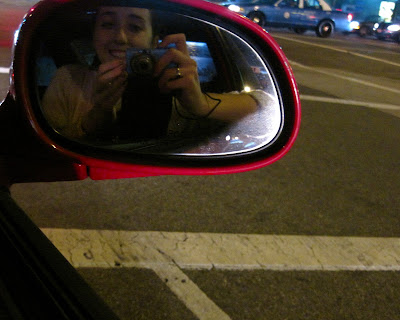 Every production of an artist should be the expression
of an adventure of his soul.
~W. Somerset Maugham 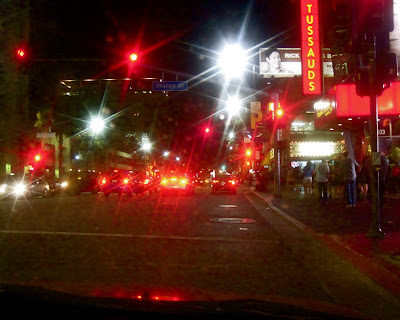 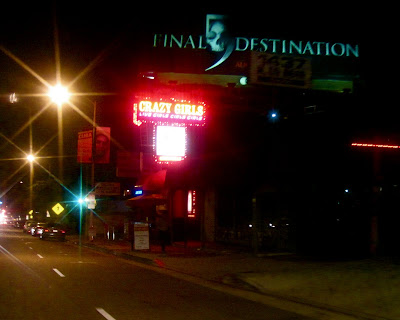 We also had fun cooking dinner together. This was one of our Italian nights ...
Our pasta dinner, complete with Italian music ... 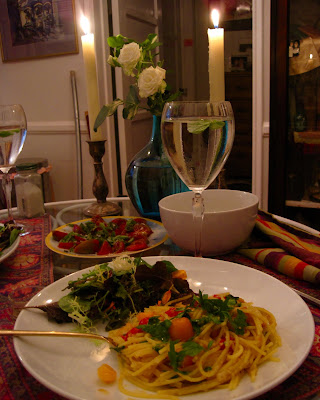 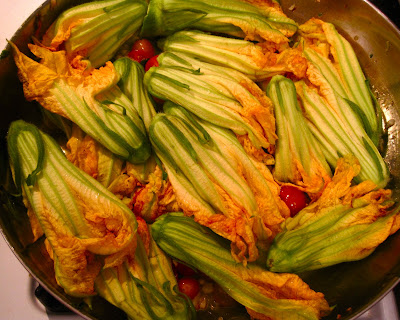 Our bok choy with garlic and fresh ginger stir fry night!
(so good with a bit of sesame oil, onions and soy sauce!) 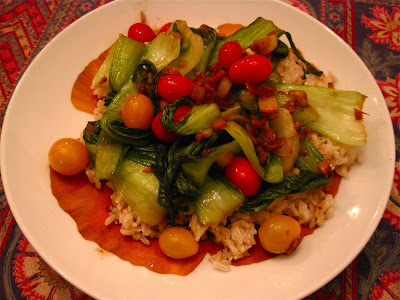 And then last Friday, after two weeks of photographing and printing, the kids all had a show of their work. It was in a large space on the U.C.L.A. campus and included the painting, drawing, sculpture and photography camps.
Of course, there was one person's work who really stood out and I am not just saying that because she's my niece! Her teachers even said what a great eye she has and how great her work is. Anyway, you can take a look for yourselves. These were taken with a film camera and her prints were then photographed with a digital camera. I wish you could see her beautiful prints in person!
Feel free to double click on the photos to get a better view!
"Too Much Rock for One Tanning Salon"
Photos by Rachel Herring 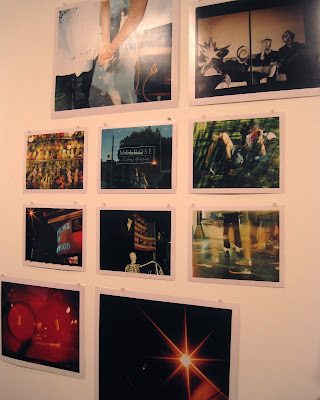 (Yes, the guy in the photo below is actually reading Catcher in the Rye at the Getty. Too perfect.)
From the Getty ...
Photo by Rachel Herring 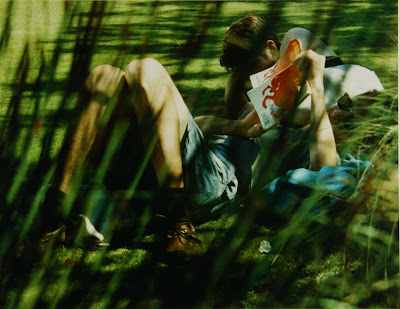 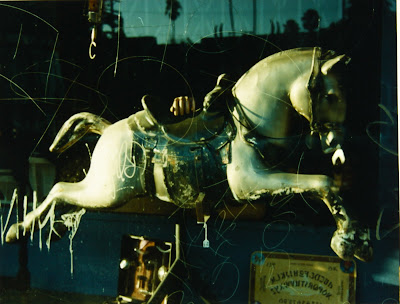 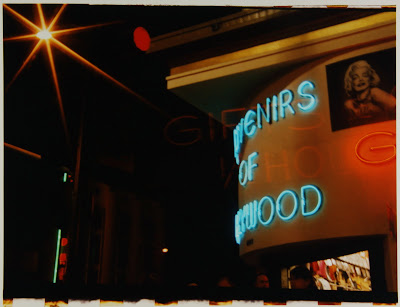 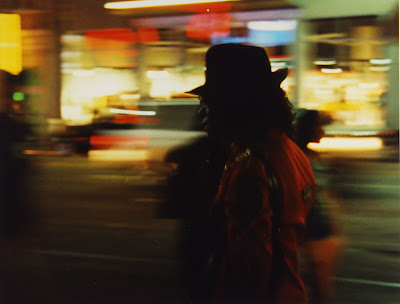 And my favorite ...
(can you see "Michael Jackson's" glittery socks?!)
Photo by Rachel Herring 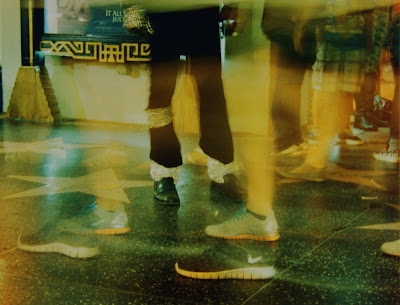 I am so proud of her! It was so much fun. We are already making plans and trying to figure out when she can come back!
And yes, she has a blog. ;)
Art flourishes where there is a sense of adventure.
~Alfred North Whitehead
Hope you all had a bit of adventure in the last two weeks!
Blessings and light!
Posted by Cobalt Violet at Sunday, July 31, 2011

Yay Lucinda!! These were the best two weeks ever! And now you can tell all your friends what is trendy nowadays with hipsters, justin bieber/selena gomez news, dubstep, and everything else! Thank you so much ✿♥♥♥♥♥♥♥♥✭✭✭✭✭✭✭✭✭✭✭✭✭✭

Awwww--what a great aunt you must be. I'll bet she loves being with you--and she IS talented. Sounds like you'll both remember these adventures. Love her work--I'll have to check out her blog, too.

Lucinda, you are a good aunt! The other night I tried to find Cinema Paradiso on Itunes and they didn't have it. I have wanted to see it for so long. What wonderful memories you two will have.

Yay. She is so talented. Mmm that pasta sure looks delicious.

What beautiful summer days you are having, dear Lucinda! So full, so vibrant, so warm. And oh, tha pasta.. I haven't had pasta since I left Italy, because I'm afraid I will be so disappointed and sad and it will hit me like a slap in the face, how far away I am from Italy and the food that is being made there. Sigh.

you have a lovely blog…I like your writings and words...Please check out my blog.I am having a Giveaway in my blog..Please check it out and partcipate in that..
http://yummytummy-aarthi.blogspot.com/2011/07/homemade-bounty-chocolate-and-giveaway.html

Hi Lucinda,
its been quite a while since i've been to your cosy blog...
And, everything is always so delicious in here!
Hope you're having a great time!
hugs
col

Rachel~ You are so welcome! I had a great time too and yes, I am now all caught up on pop culture and can now fully enjoy the 21st century! ;)

Suzanne~ Thank you, I try! Definitely go check out her work! :)

Jane~ I think her work is too! I will tell her said so. Room with a view is in my Netflix queue! I don't think I have seen it since it came out!

Loree~ thanks, I will tell her. The pasta did taste pretty good but I had a great helper in the kitchen!

Turid~ Yes, I am definitely trying to make the most of this summer. I am determined!!! :) It's true, pasta is always the best in Italy. I am sighing with you!

Aarthi~ Thanks! And thanks for visiting!

these images are making me miss LA terribly... great post!