Back to the Highlands~ Glenfinnan, Clan Cameron and off to Onich!

"I shall share the fate of my Prince,
and so shall every man
over whom nature or fortune
has given me any power." 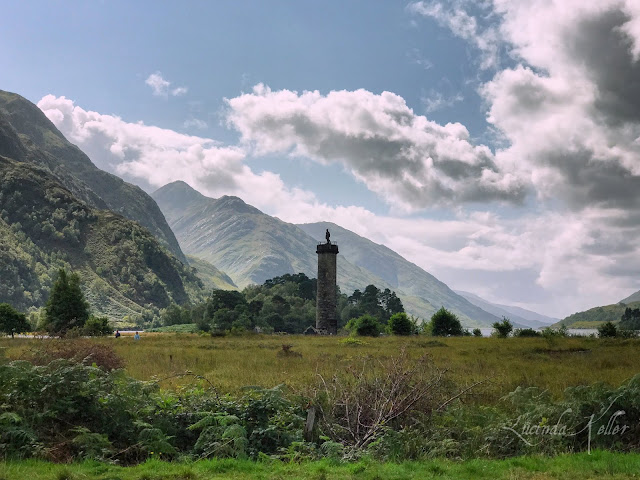 I can't believe it's been nearly a year and a half since we were there and so much has happened! The thing is, I loved Scotland so much that I'm bound and determined to finish posting about it! 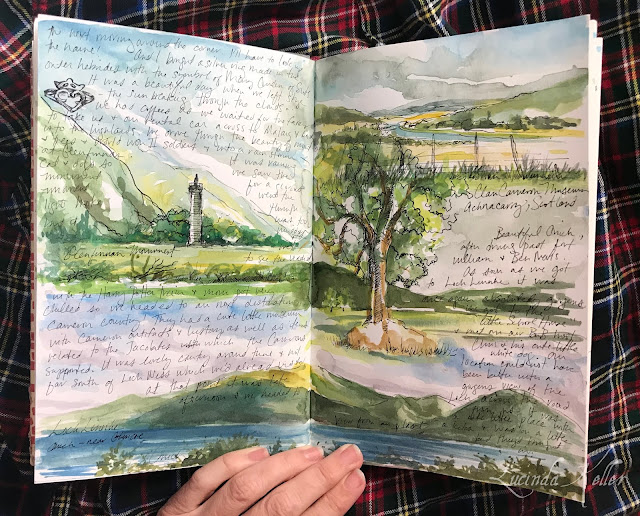 This monument was  built where Bonnie Prince Charlie raised his father's Standard and waited for the Highland clans. At Glenfinnan he would rally the Highlanders to the Jacobite cause with the mission of putting a Stewart King back on the Scottish thrown!  The monument is a tribute to those who died fighting for what would turn out to be a lost cause. 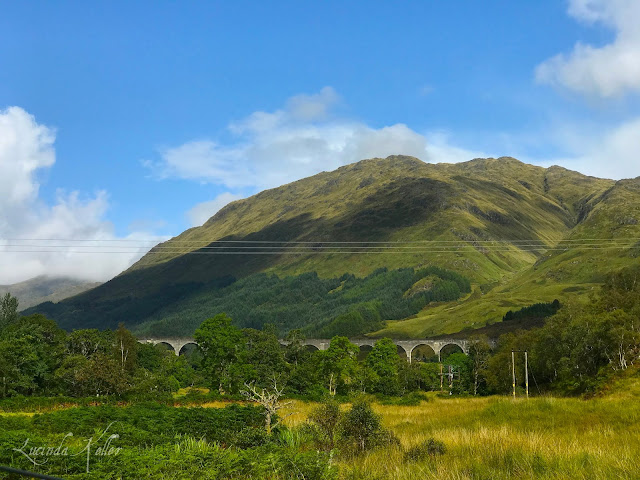 Across the road is a trail that leads you to a famous bridge that will take you to Hogwarts! You can actually take a ride on the Jacobite Steam Train over the viaduct from Fort William to Mallaig. Would have loved to have taken my nephew, Benjamin, on that adventure!

It was gorgeous when we arrived! Alas, though not surprisingly, enormous clouds rolled in and within a few minutes it was raining buckets. (It was Scotland after all!) Unfortunately, that meant that we never got to see the quintessential view of the Harry Potter bridge! I was very happy though to have caught a glimpse of the lone kilted highlander on the top of the monument. 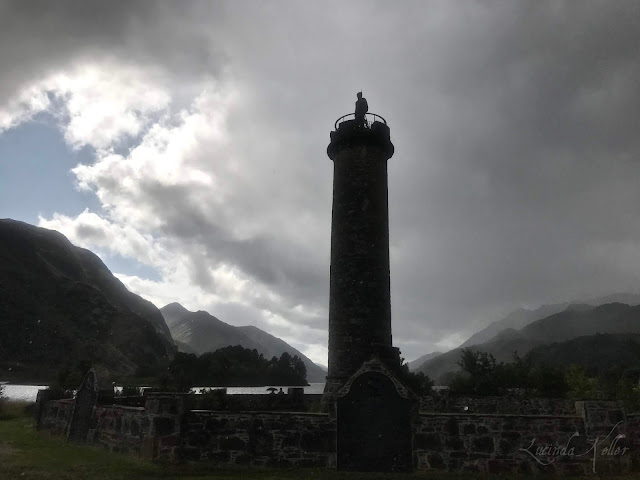 We decided not to hang around waiting for the sun and instead moved on to Cameron country.

The farthest back we've been able to trace our matrilineal ancestry is to my 4th great grandmother Catherine Cameron. Catherine was born in Scotland in 1798 and at some point immigrated to Canada.

Catherine's daughter Nancy Ann Grant was born in Glengarry, Canada but would give birth her daughter Anna in the United States, in Faribault, Minnesota. 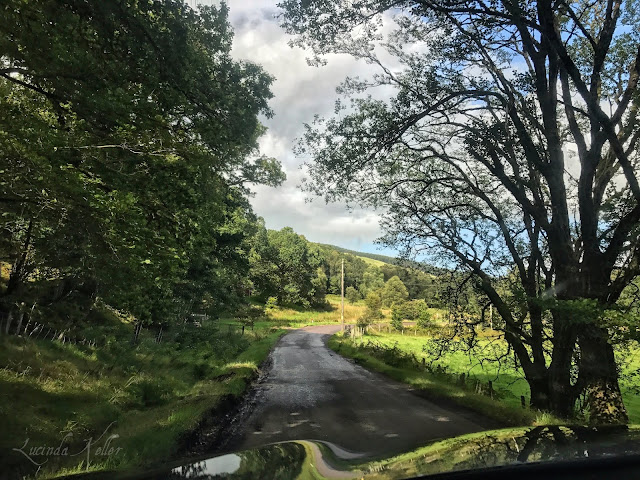 We have not found Catherine Cameron's specific birthplace but I felt going to Cameron lands and the Clan Cameron museum would be the closest I would get to hopefully having a sense of her birthplace. At least, for now! 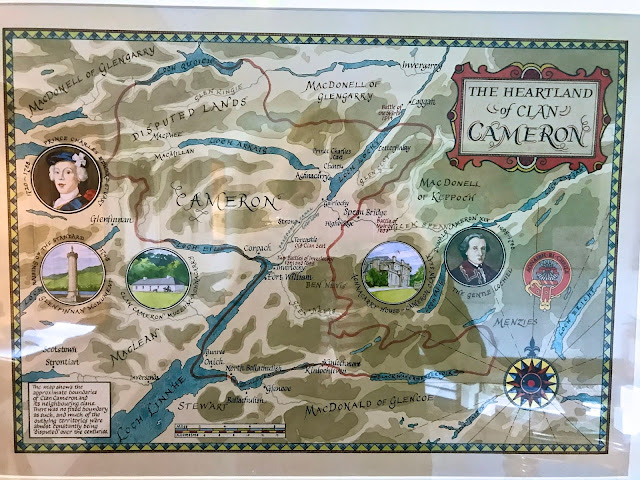 The "Heartland of Clan Cameron" is South of Loch Ness and Northwest of Glencoe.

And it's beautiful country! 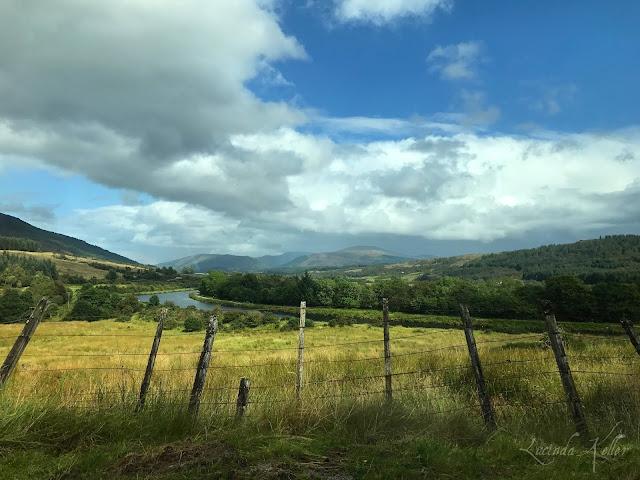 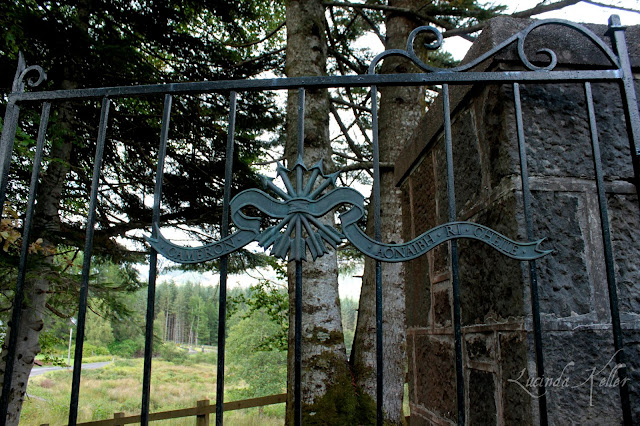 The Gate of Clan Cameron leading to the museum and Castle 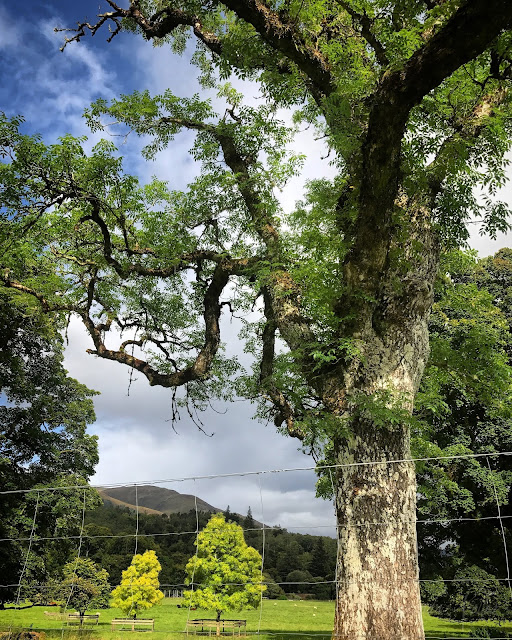 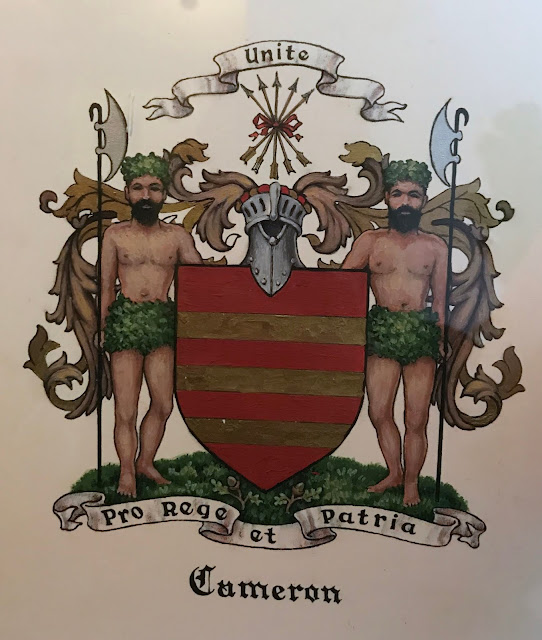 John Cameron of Lochiel XVIII Chief lived in exile in France after the 1715 rising. Of his four sons, Donald, John, Alexander and Archibald, only John did not an active part in the '45 Jacobite Rising.

The Camerons are proud of their history as Jacobites and their support for Bonnie Prince Charlie. 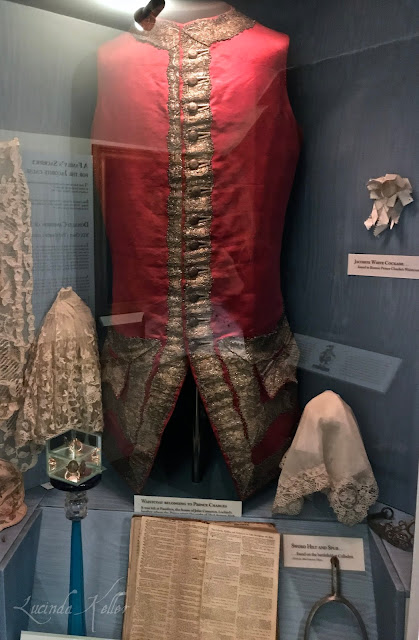 It was left at Fassifern the house of John Cameron, Lochiel's brother where the Prince spent the night of the 23rd August, 1745, a little over a year before the battle of Culloden. Fabulous, right? I would totally wear it. 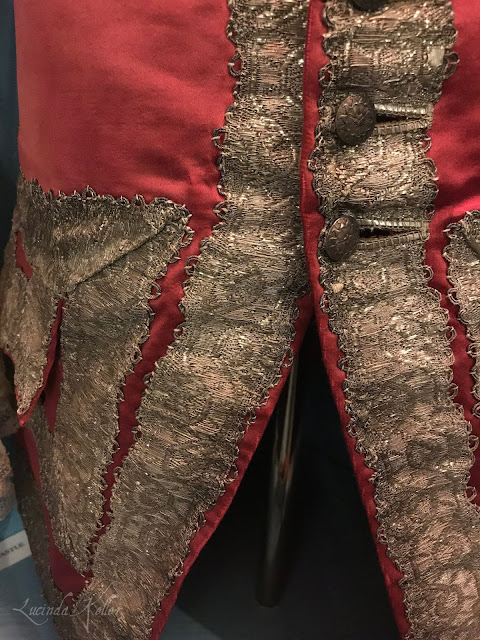 Donald Cameron of Lochiel
XIX Chief- "The Gentle Lochiel" took over responsibility for the clan in 1716 ...

"As soon as the Prince [Charles] landed [in 1745] he summoned Lochiel to him, knowing that if he could win his support then the other clans would follow. Lochiel was determined that the Prince should return to fence but instead, on meeting him, he was persuaded by the Prince to commit itself and his people - thereby securing the wavering support of most of the other chiefs." 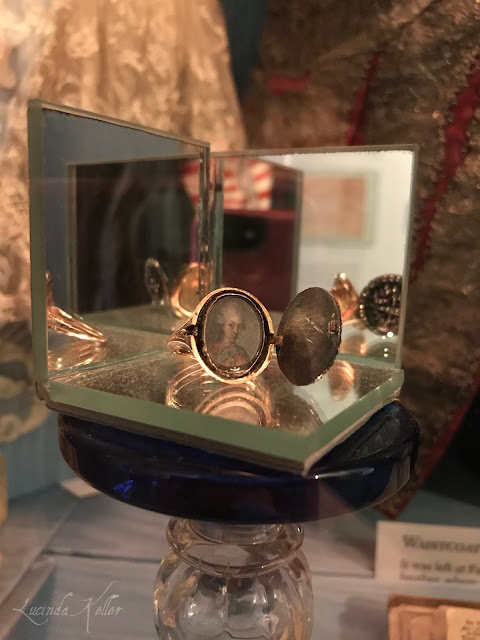 Jacobite Ring (above) with a secret spring which, when opened, reveals a portrait of Prince Charles Edward Stewart.

"Lochiel fought at the head of his Clan throughout the '45 and was wounded in both ankles at Culloden. He was carried from the battlefield and made his way back to Lochaber."

"There he saw all the Cameron lands laid waste and his house of Anchnacarry burned to the ground. He escaped to France with Prince Charles and died there in 1748." 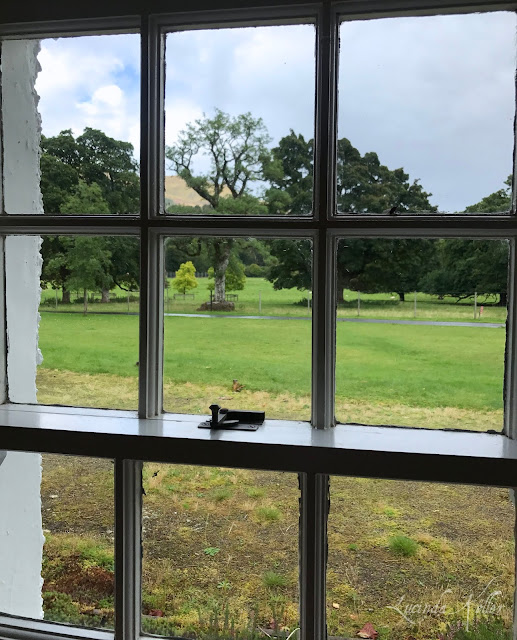 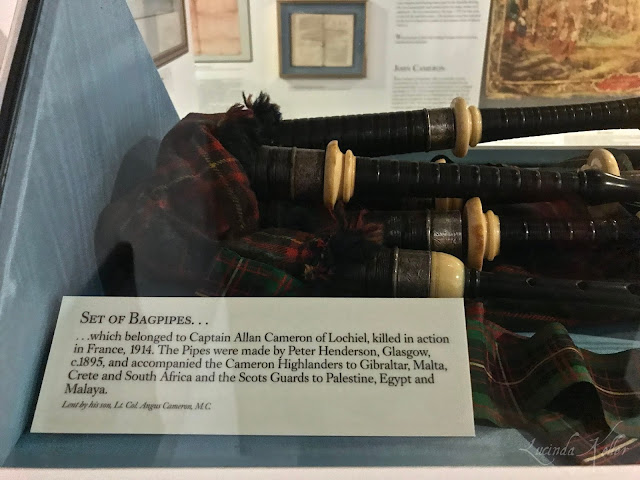 I love the Cameron tartans, especially the Cameron of Erracht pattern which has more navy blue and green than the others, with red and very fine yellow stripes. I think it's on the old WWI bagpipes above. I bought a couple of yards of the tartan ribbon which I'd love to put on a hat and a beautiful long wool tartan sash for my mother.


For two nights we'd be staying in Onich on Loch Linnhe, near beautiful Glencoe. On our way we saw this monument to the officers and commandos who died in WWII. 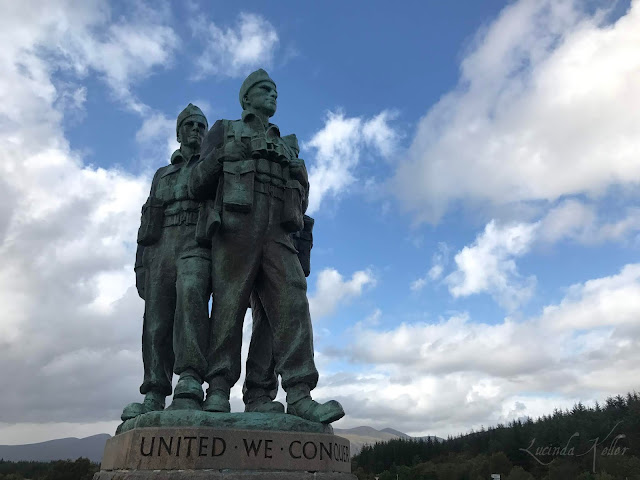 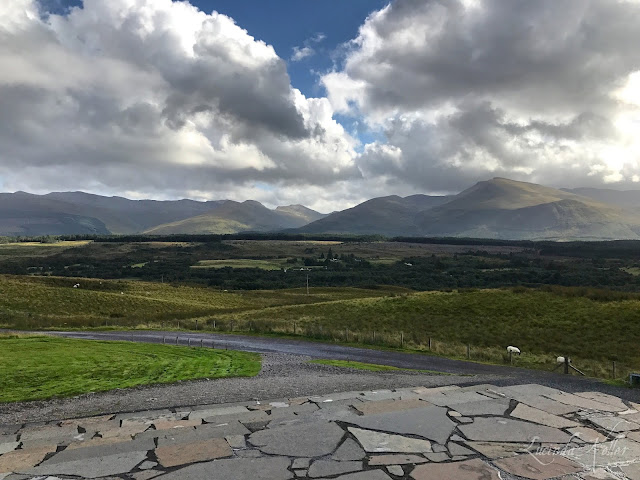 In the early evening we made it our little AirBnb at the "Little Schoolhouse" in Onich, right across the road from Loch Linnhe. It was breathtaking! 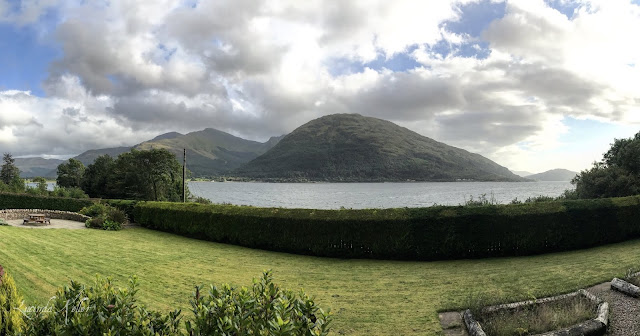 It was a cute and clean little one bedroom with a spectacular view! They set up a little bed for me in the living room. I would love to be able to go back for a week just to hike around and to do some plein air painting! It would be heavenly. 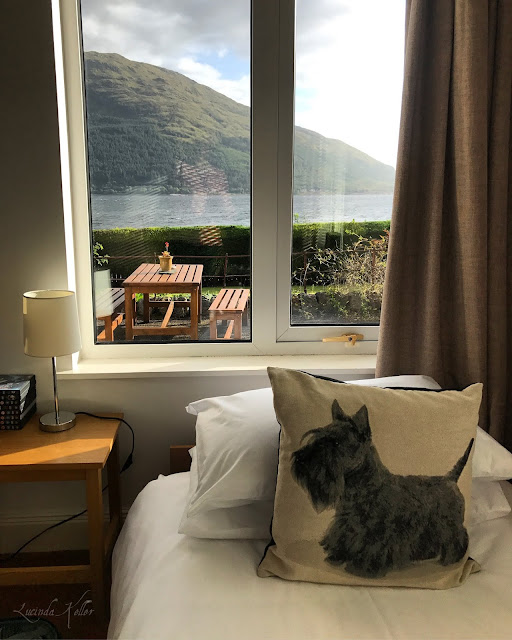 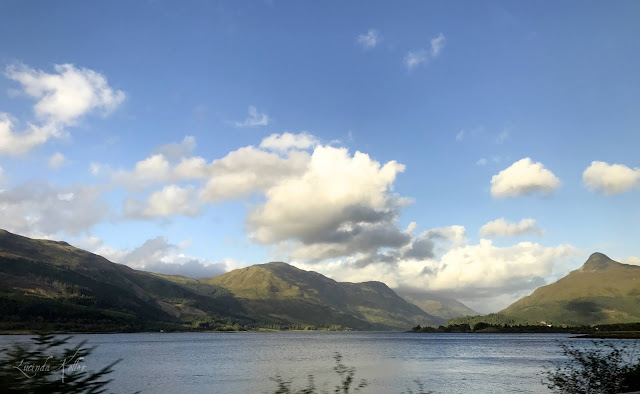 After meeting the lovely couple who live in the adjacent house and run the little AirBnb, we got settled and drove a couple of little towns over, to Ballachulish, for some dinner. 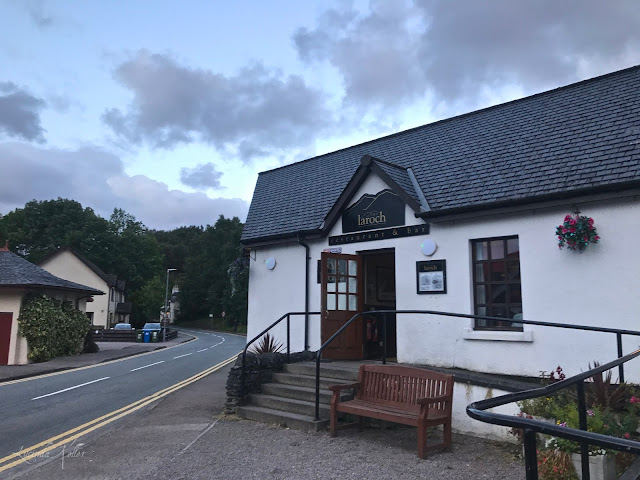 This pub is also where I left my new red hat from the millinery shop in Edinburgh! Unfortunately, I didn't figure that out until we got to Glasgow. As I mentioned in a previous post, I called the pub and a sweet lady who works there said "The wooly red cap? Where are you staying?" I explained that I'd stayed at the little school house and she offered to drop it off with our BnB hosts who she seemed to know. They sent the hat to my parents' address in Ojai! In fact, I wore it yesterday!