March was a big mix!
Monday, I drove up to the area around U.C.Santa Barbara. I took pictures, for studies to work from, (for the P.S.G.C. pastel show in May.) These, below, were taken with my iPhone. It was a gorgeous day, as you can see! I hung around until sunset at the beach. Oh, how I love the sound of the ocean! Somehow, it's so much easier to be mindful and present with that sound of crashing waves on the sand. It's very grounding.
I will be sharing more of my photos from that day later, since I took a couple hundred photos on my little Canon PowerShot! Don't worry, I will do some "extreme editing!" Anyway, the pics should be fun to work from and I got quite a variety. 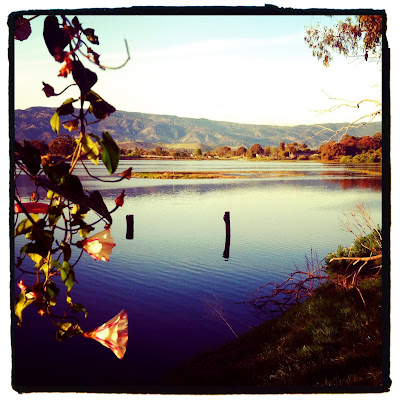 Happiness is a butterfly which, when pursued,
is always beyond our grasp,
but which if you will sit down quietly,
may alight upon you.
~ Nathaniel Hawthorne 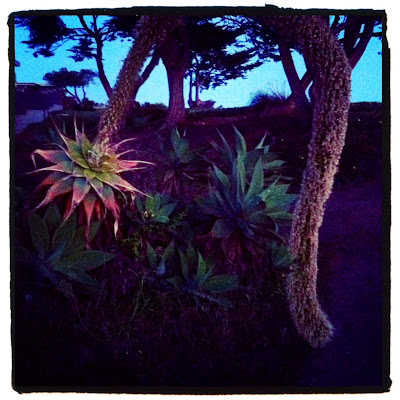 All seasons are beautiful for the person who carries happiness within.
~Horace Friess 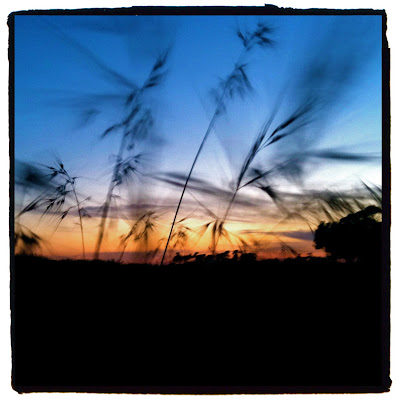 My friend Karen and I talked for weeks about going out for a cocktail, before it actually happened. We finally had a cocktail! Yes, singular. One cocktail (each) and it was delicious (Ketel One Vodka, with fresh squeezed lemon and raspberries!) but before the second one came, I realized one was enough. I don't know if was the drink or the crazy combination of hors d'oeurves we ordered, but all of the sudden my solar plexus felt like it was on fire. Good gravy! How old am I? Hopefully, our sweet server enjoyed the second one on her break. 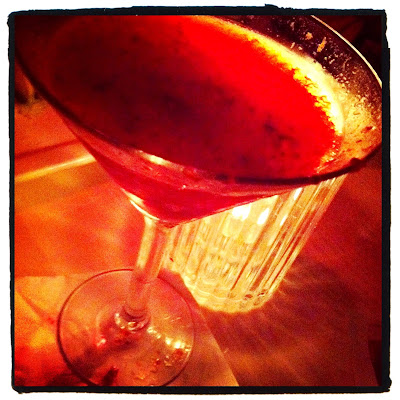 Early in the month, my niece Rachel came down to L.A. and spent the night. Her one request was to go to OH WOW gallery on La Cienega to see the Terry Richardson show, TERRYWOOD. Yes, the long legs in red belong to Rachel. 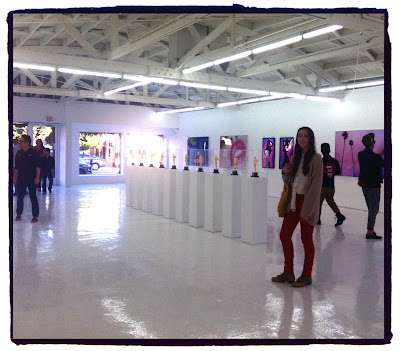 This, below, was a huge photo of paparazzi and as you walk by, flashes go off, sound and all. 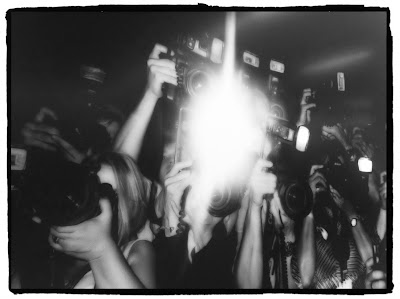 The In n' Out Burgers were my favorite. Very iconic for Southern California. As you can see, they weren't kidding around blowing up these pictures. They were huge. 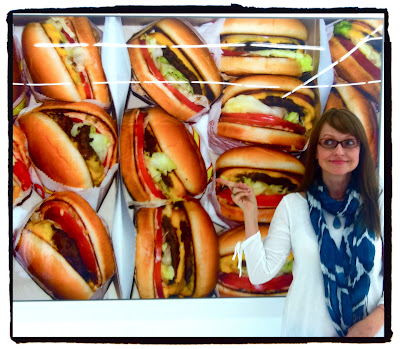 What we call the secret of happiness
is no more a secret
than our willingness to choose life.
~Leo Buscaglia
One thing I couldn't miss in March was my nephew's 1st grade play, American Heroes. 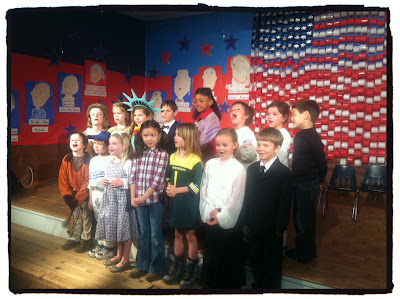 Each child represented an American, from history or modern times, who either changed things, made a difference in some way, or represented some positive message. There was everyone from Mia Hamm and Helen Keller, to Lewis and Clark and Sacagawea, (and even Steve Jobs!) They all sang a song about heroes and they either said a quote or told a story of the person they represented. 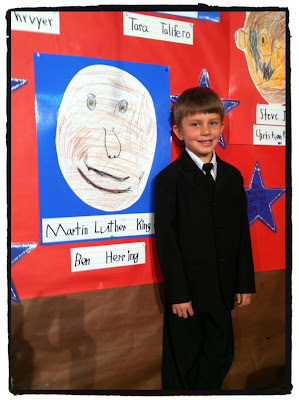 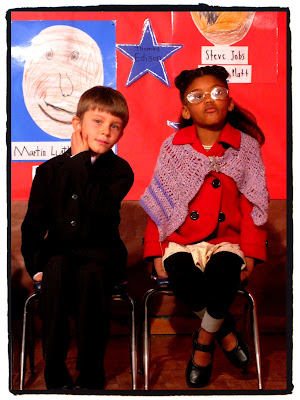 When Ben stood up, he said "I speak for Dr. Martin Luther King Jr. who dreamed of a world where all people were judged by the content of their character, not the color of their skin. He encouraged all people to seek changes in unjust laws by peaceful means." 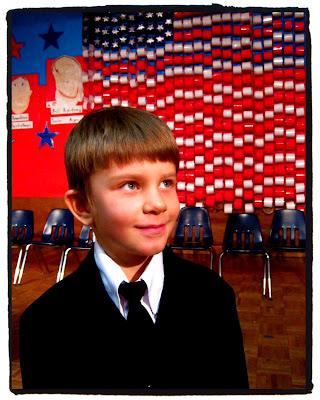 Oy, I know I am partial, but look at that face!
I also finally photographed my vision board that I put together after the New Year, thanks to some inspiration from lovely Turid at A House and a Garden. (If you haven't checked out her beautiful blog, you should!) 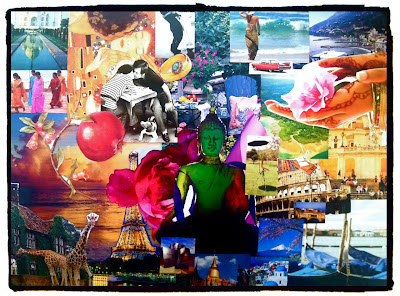 Then there was a bit of babysitting ... 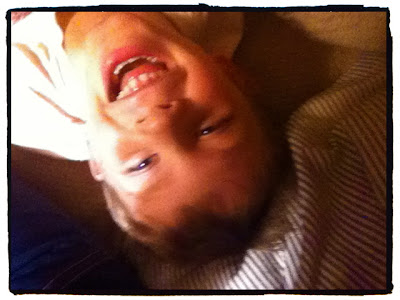 Seriously. Love that kid.
When you have once seen the glow of happiness on the face of a beloved person,
you know that a man can have no vocation
but to awaken that light on the faces surrounding him ...
~Albert Camus
As March is coming to a close, I am off to a "healing workshop" with Christel Nani. I will let you know how it goes! Hope you all had a great month and I have to say, I am really looking forward to April!
Lots of love, blessings and light your way!!!
Posted by Cobalt Violet at Thursday, March 29, 2012

Oh, Lucinda, you are something else. Are the In and Out burgers as good as they say and by the way, you look adorable next to them. All of 21 I'd say.

Hi Lucinda,
The photos taken with your iPhone look great!
Wonderful light and quality images. Santa Barbara is beautiful and you are so lucky to be able to visit places like that.
I would like to have visited the exhibition too. Love the gallery space at OH WOW.
I have to say your nephew is really cute. The school play looks like a special event and I can understand why you are proud of Ben.
Best wishes,
Jo.

They are pretty darn good for drive through!
Um and thanks... Yeah not a day over 21!! Lol!!

Thanks Jo and yes I'm very proud of the little man! Can't get over him! I do feel lucky I'm pretty close to so many places-- we both are! :)

What a very cool set of shots! Great work.

Thanks JM! Thanks for stopping in!

There's a chance you are qualified for a free Apple iPhone 7.

Get all your favorite alcoholic drinks on Duty Free Depot!

BlueHost is ultimately the best hosting company for any hosting plans you might require.