Roman Ruins, in Pastel ~ The Baths of Caracalla

I am not an adventurer by choice
but by fate.
~Vincent van Gogh

All done! I love ruins among greenery, and here is my first piece of this combination, at the Baths of Caracalla. If you read my Baths of Caracalla post, you know that I went to the Baths, pretty much just to photograph them, for studies to draw and paint. This is the first of, hopefully, many pieces ...

The Roman Baths of Caracalla
Pastel on mounted Wallace paper,
with watercolor underpainting 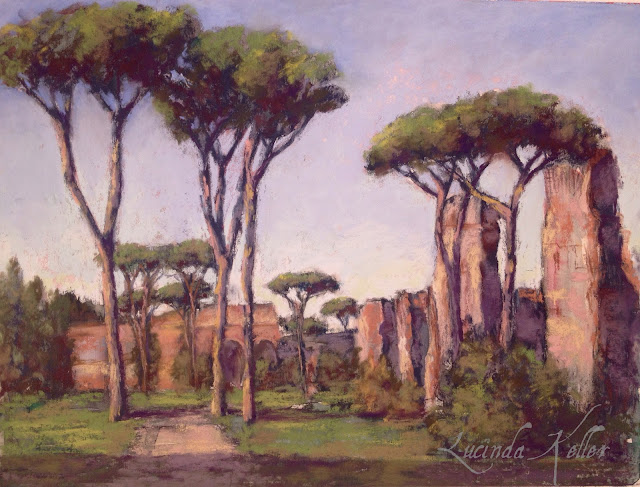 I started with a photo of the view I wanted ... This is the main photo I worked from. 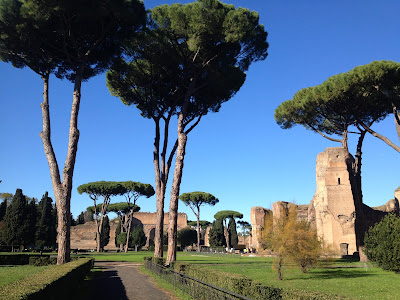 I chose to squeeze it all in to a smaller space, adding the big structure in the middle of the photo below, so I'd get those side by side, tall structures. It was cut off in the above photo, but fortunately I was snapping lots of photos, to get as much coverage as possible. Mixing the two photos, I felt I got a better composition. 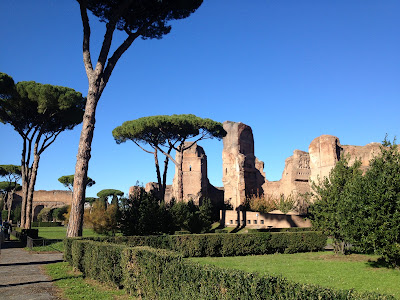 Then I sketched in, what I wanted, with dark blue and green hard pastels (by Nupastel.) 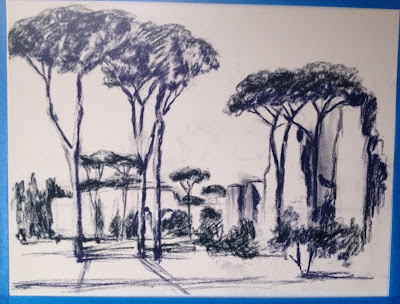 I wetted the drawing with a paintbrush dipped in SpectraFix. Now I had my main shapes in, with some of the major values. 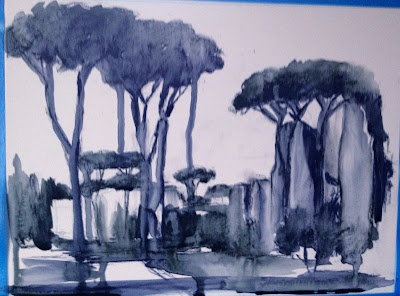 After that I went in with a watercolor underpainting. Part of the idea, for me, is imagining what colors I may want to use over the top, and what effect that will create. 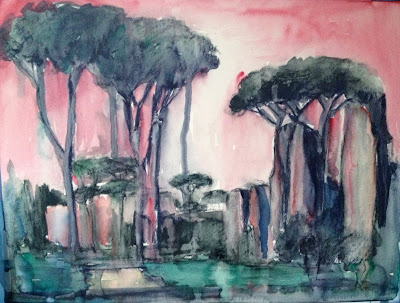 After that, I was ready for soft pastels. (I use a variety of brands, like Unison, Mount Vision, Girault, Terry Ludwigs etc.) I went in with the sky first, then little by little, going into the trees and ruins ... the grass... then adding more colors, with varying intensity.

The photos are so contrasty, it's a challenge to keep it from getting to flat and graphic ... which would be ok, if that is what I was going for! 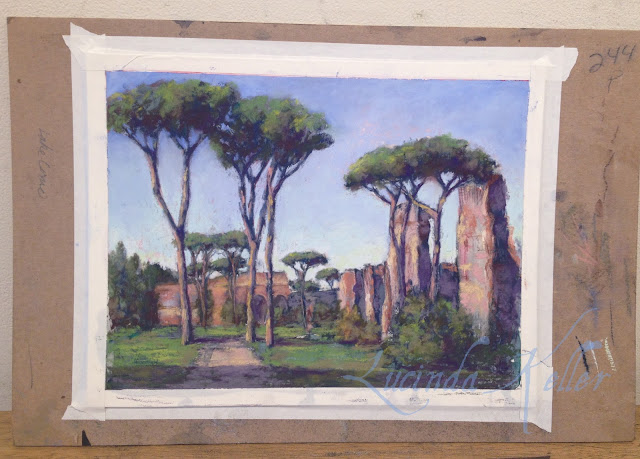 Anyway, it was pretty fun to work on, especially the brick and stone of the ruins. Right now, I'm working on a piece of the Palatine Hill. It's turning out pretty abstract because you can't really tell what anything is, except for one single tree and it's reflection, in puddle of rain water.

More Italy to come, as well as the baby birds that hatched, in a fern, next to my parents back door. So fuzzy and cute, I can't even handle it!

I am still far from being what I want to be,
but with Gold's help I shall succeed.
~ Vincent van Gogh

You captured the essence of the place beautifully!

such a beautiful piece Lucinda!
i also loved seeing the stages you took to create it. Did you let the spectra fix dry before you went in with watercolors?

I have only played with pastels a couple of times, it was fun.

lovely weekend to you ~

You've given the place it's ancient feel again in your piece...love the moods of warmth and age...bravo!

Tammie Lee - Yes, I let the spectrafix dry, but it dries really fast. The paper is made to take damp media ... I used mounted Wallace which has a sanded finish.

Kerry- thank you so much!

What a beautiful version of the "Terme di Cracalla". Colors and lights are absolutely fantastic. Great job, Lucinda. Ciao.

What a beautiful painting!! You captured the feel of past grandeur. Lovely, lovely.

I liked seeing a little bit of your process too. Thanks for sharing!

This is stunning pastel work and you have captured the Roman Baths beautifully.
It looks a very peaceful place to sit and draw, and that blue sky is so intense in colour.
Love the pastel textures in your drawing!

Lucinda, you are one talented woman! Gorgeous painting!