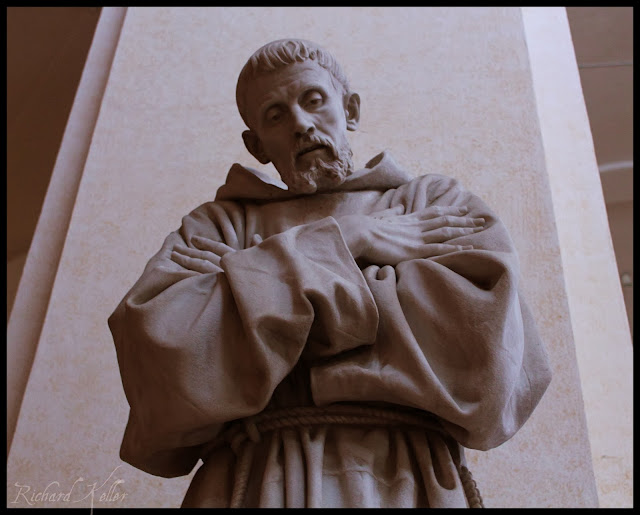 After my morning cooking lesson at La Fontabella, I headed up to Piazza San Rufino. Here's some Medieval Italian music for the journey...

Preparing all the food for our little feast that night, got my appetite going. So, I headed to the place someone mentioned, on my first night in Assisi. We had walked past it, on our way to the Rocca Maggiore that night, and it was pointed out in the piazza, across from the Duomo of San Rufino. "Best pizza in Assisi. All the locals eat there." Well, sign me up! 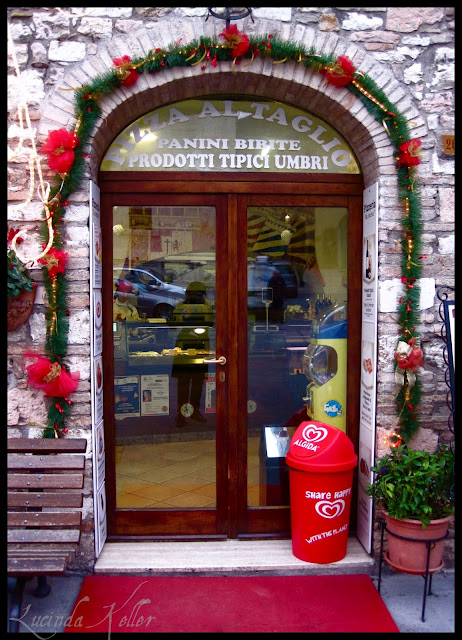 And they were right! It was molto delizioso! 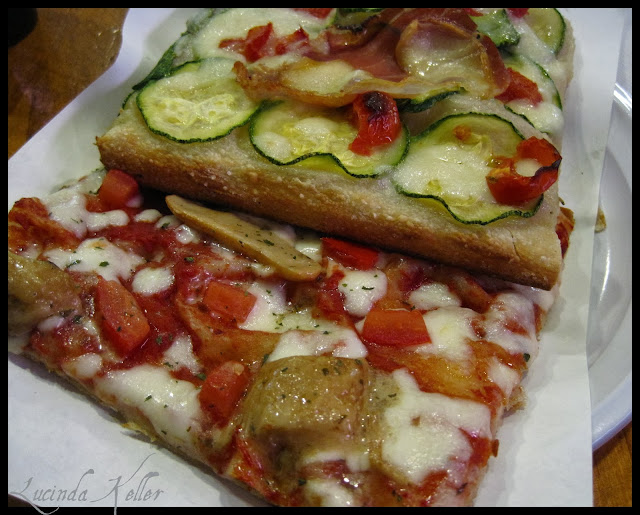 I sat and had my pizza and glass of vino rosso, and I will tell you that I would definitely go back. In fact, I did. Right before I got on the bus my last day, I got my "to go" slices and was on my way! (I felt a little bad for the people sitting next to me, but what can I say? I was thinkin' ahead!) 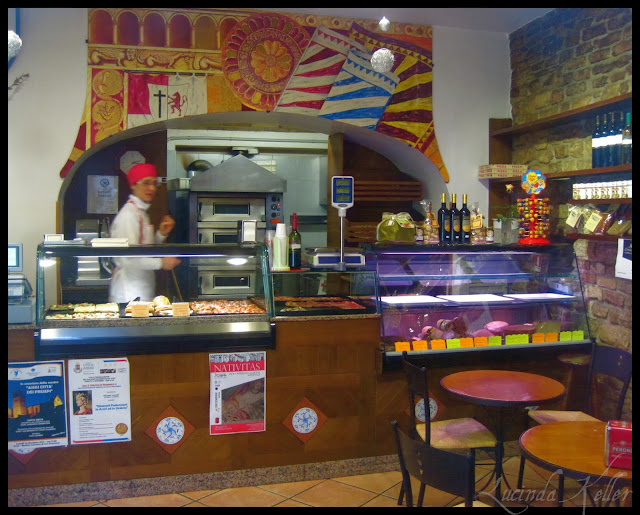 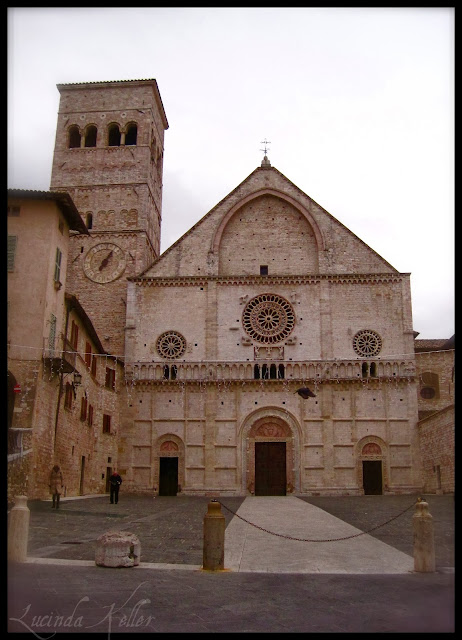 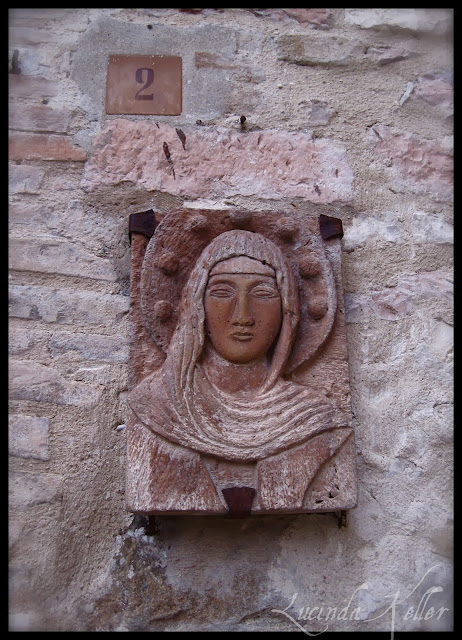 It is believed Saint Clare of Assisi, who was of nobility, lived here, to the left of the Duomo. 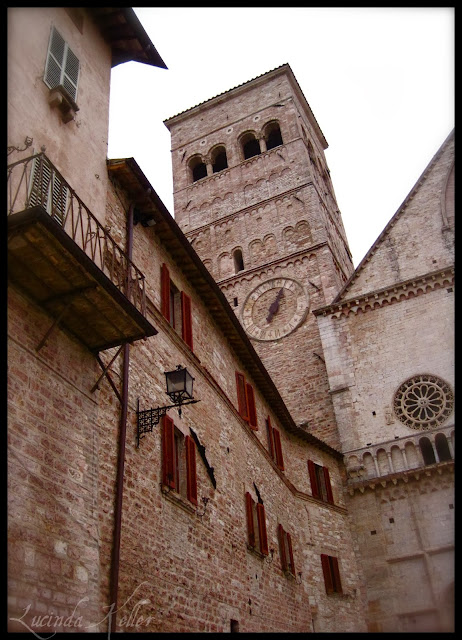 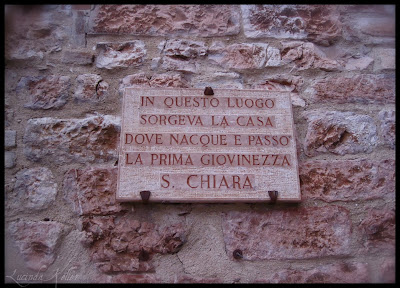 There is a little alcove, made into a sacred space ... 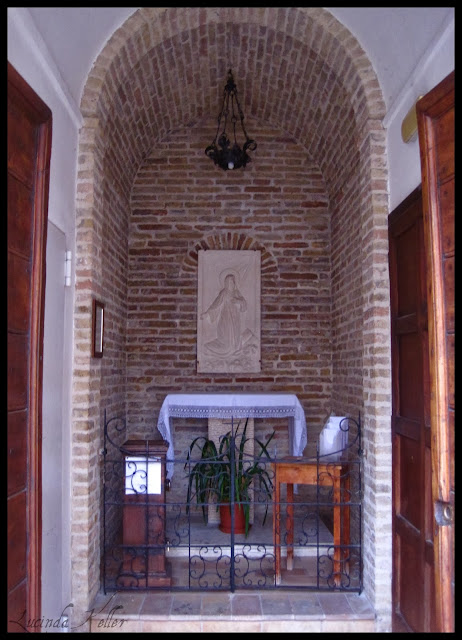 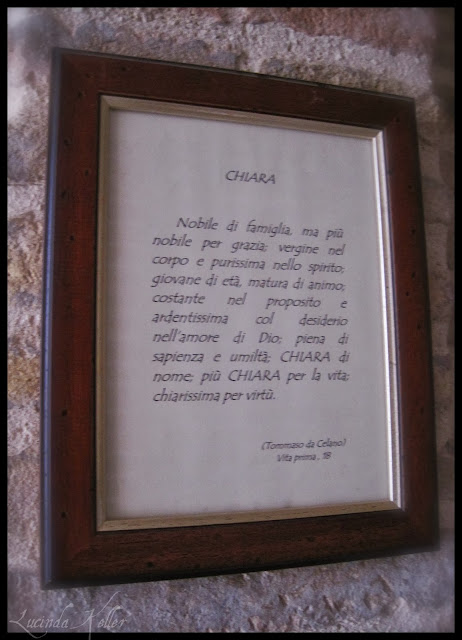 "Noble family, but more noble by grace; virgin pure in body and in spirit, young age, mature mind, constantly in connection with the desire and ardent love of God, full of wisdom and humility; named Chiara, more clear for life; clear to virtue."

You can write down things you'd like the sisters to pray for, and put them in this little wooden box. 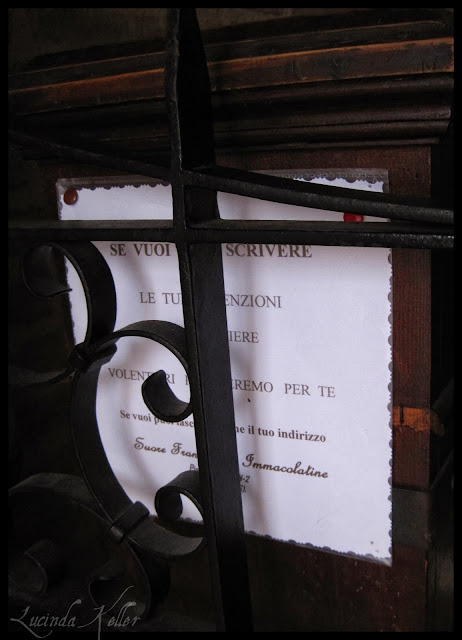 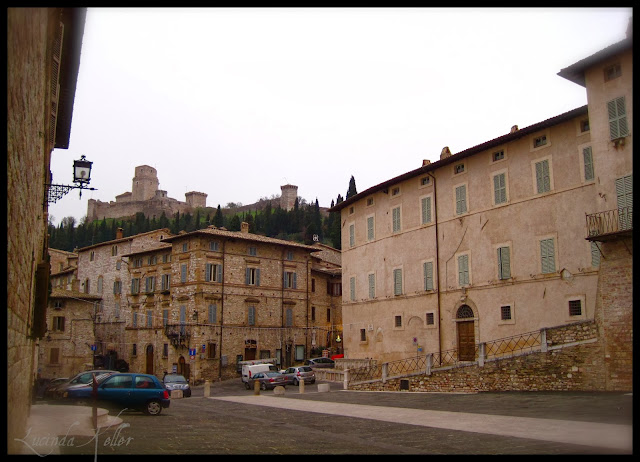 Some historians believe the duomo was built on the sight Assisi's Roman forum. There are areas where you can see through the floor of the Cathedral, to remnants of Rome as well as a Roman cistern. 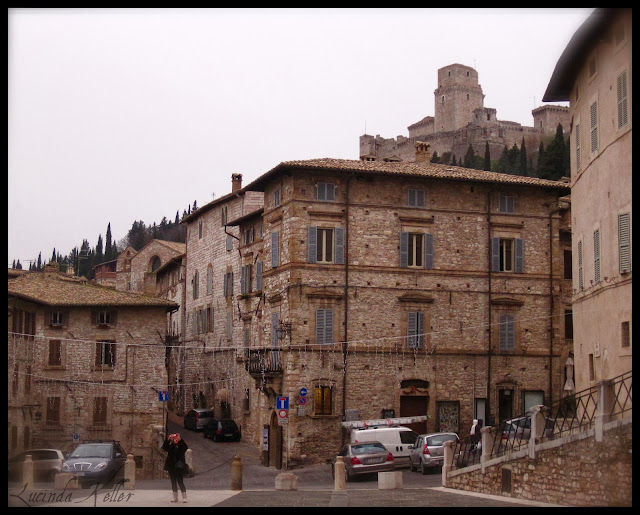 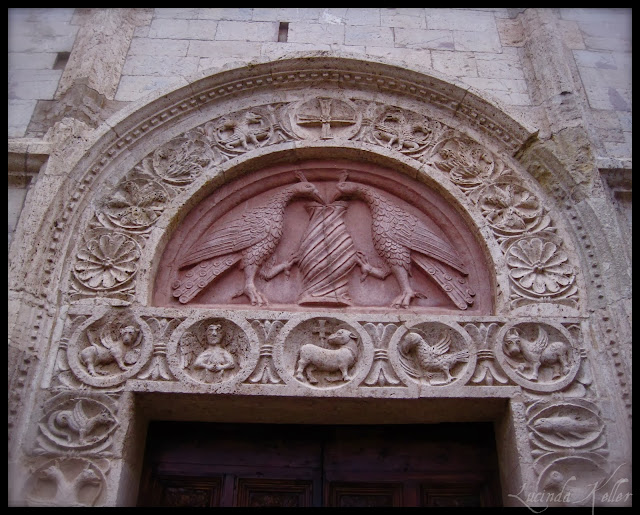 Lions, griffins and other creatures guard the doors, along with this lion (?) below, devouring some poor soul! No sure what he did to deserve that, but the medieval church didn't mess around with its not so subtile imagery! 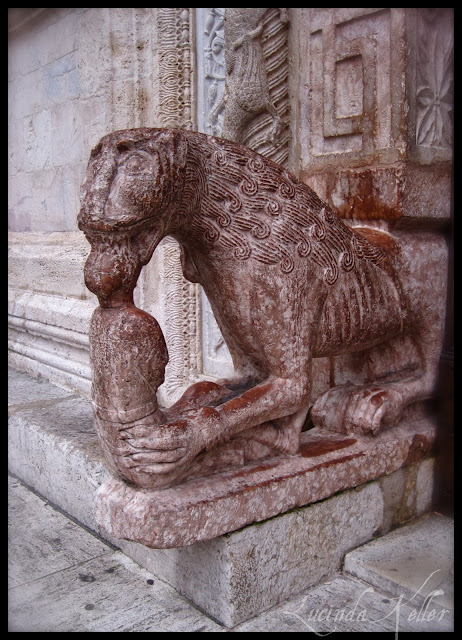 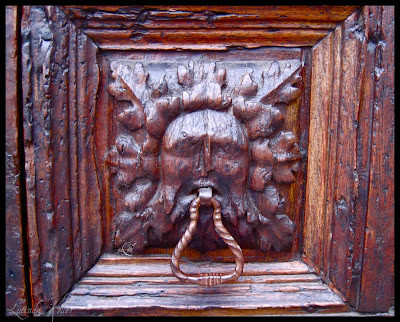 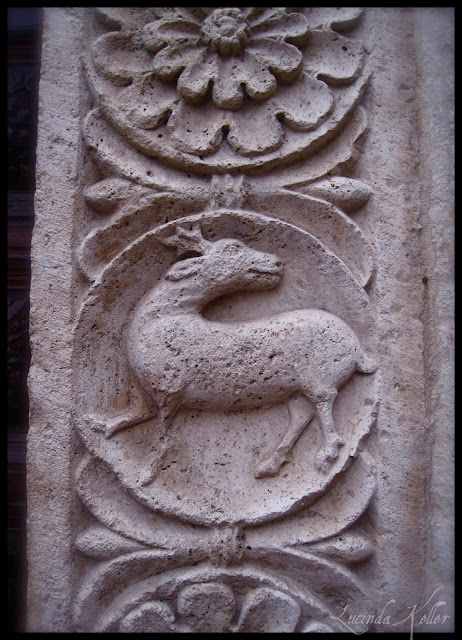 It is believed that the first church on this site, was built in the 5th century. It was dedicated to the 3rd century bishop, who was martyred here, and buried below the main altar. Saint Rufino was martyred for his faith, by the Romans, and drown in the river Chiascio, in the valley below. 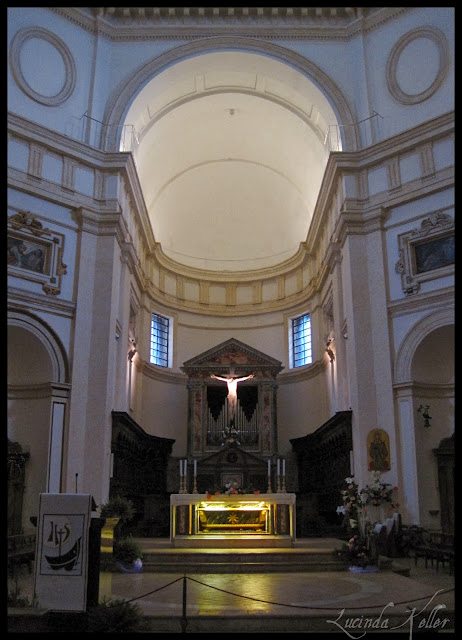 Some unrecorded miracle apparently happened here in 1028, and was witnessed by Assisi's bishop. So, he tore down the old church to build a newer Romanesque one.

But then, in 1134 another bishop witnessed an even bigger miracle (we don't know what this was either) and he tore down that church, to build yet another one. That is what we see today. Although, in 1571 they did a little interior remodel after some structural damage. 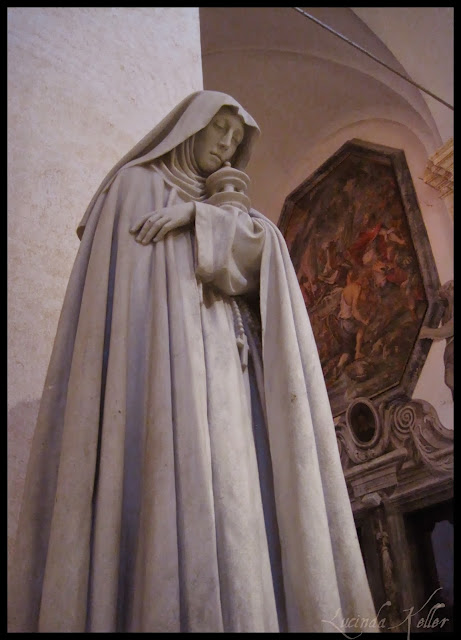 This cathedral is important to the story of Saint Claire, because it was here that she heard Francis preaching in 1209, and was touched by his message. When she was 18, at Palm Sunday Mass, she was so filled with emotion, she didn't leave her seat for the blessings of the palms.

She had secretly decided to leave her life of nobility and privilege, to follow Francis. The priest came to where she sat and placed a palm in her hands. For her it was a sign of confirmation, and soon she left her previous life behind, to start a new spiritual journey. 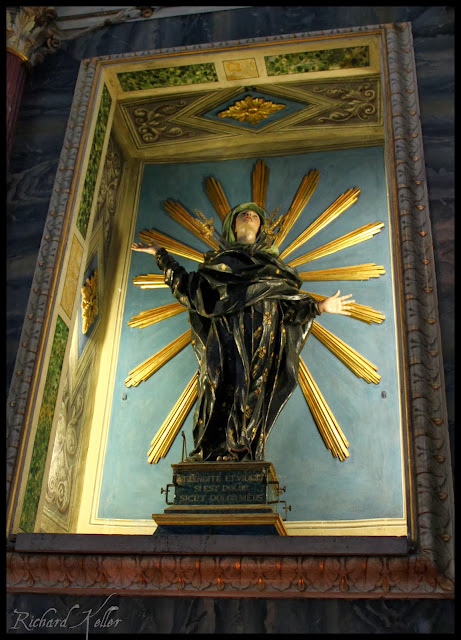 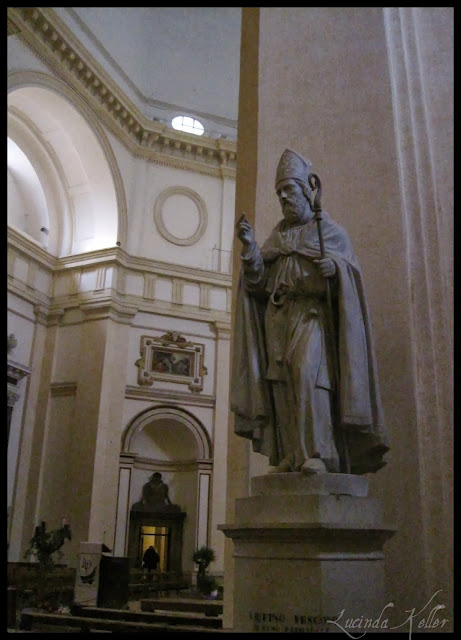 This baptismal font, below, is a big draw for pilgrims and visitors, because it is where Francis (1182), Claire (1193) and Emperor Frederick II were all baptized.

Francis was actually baptized Giovanni, by his mother, Mona Pica. His father was away when Giovanni was born and upon his return, his dad changed his name to Francesco. Francesco wasn't even a popular or known name at the time. Usually, one named their child after a saint, and Francesco just meant French Man.

Maybe this had to do with his father's trips to France or that his mother was likely French. It is all speculation. 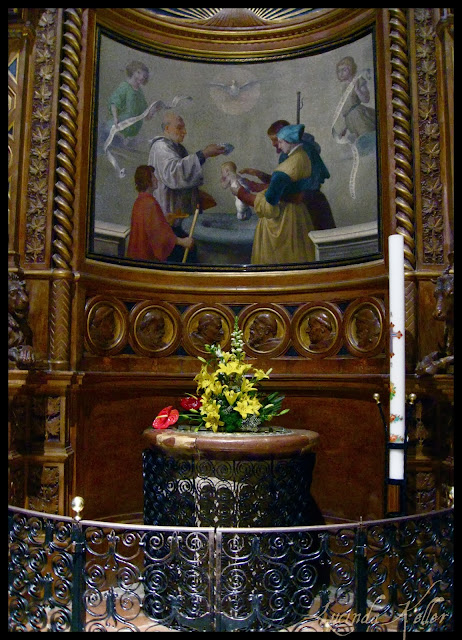 The photo, above, was taken on a previous trip to Assisi. For some reason, this time, my camera kept doing this, below. 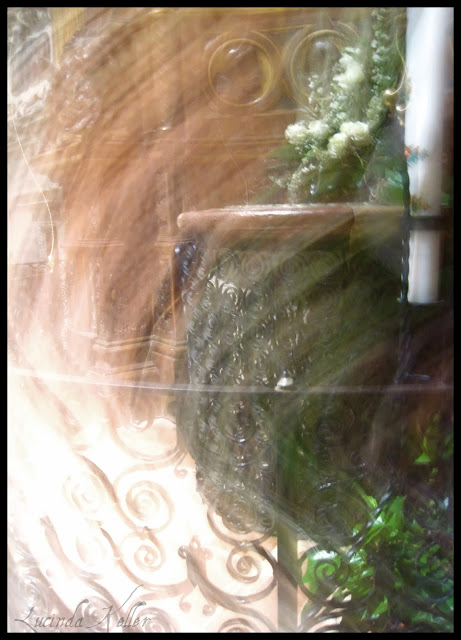 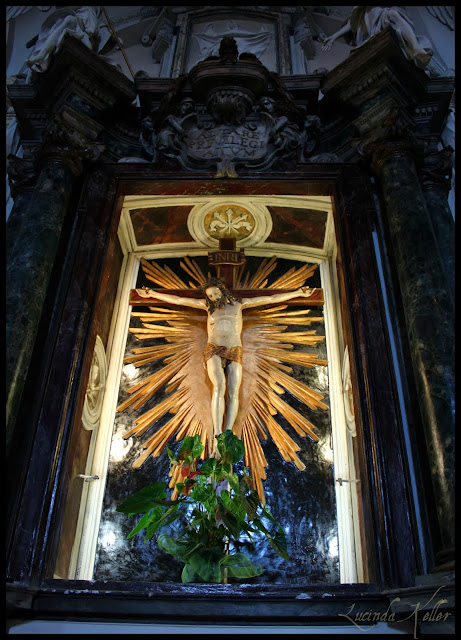 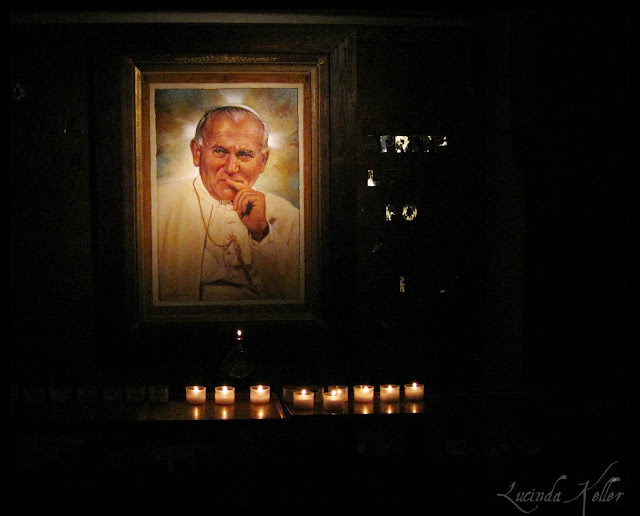 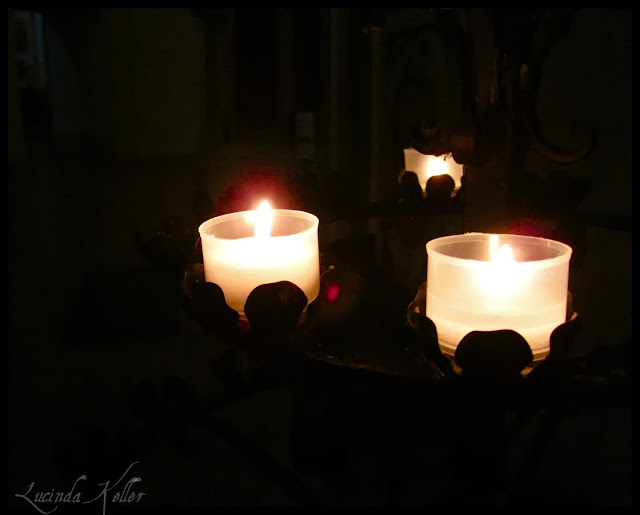 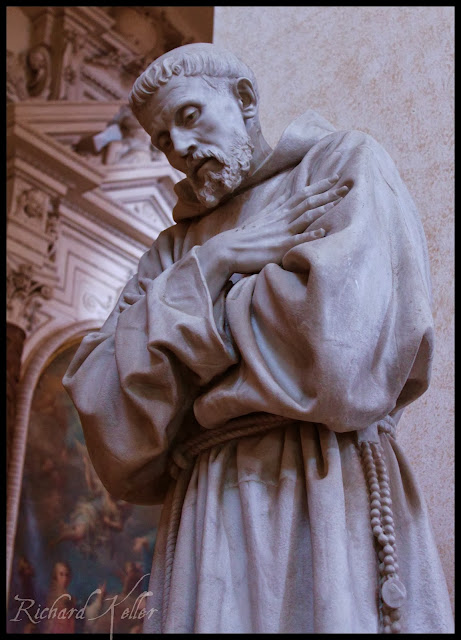 Please send to me the spirit of Your peace.
Then send, dear Lord,
The spirit of peace from me
to all the world.

May everyone I think of
and all who think of me
see only innocence and love-
for that is who we are.

Bless, dear God,
my bond with others.
Make holy my relationships
and peaceful our communications,
body to body
and soul to soul.
Amen

~from Illuminate Prayers
by Marianne Williamson

Blessings and light!
Posted by Cobalt Violet at Sunday, October 13, 2013

So...it is 9 in the morning....Iand I have a hankering for pizza with zucchini. what what??? Beautiful images. ALWAYS beautiful images!

Why oh why is Italy so beautiful? I absolutely adore it. Francis is my favourite saint. He is so humble and lived such a godly and blessed life.

Beautiful! I listened to the music too, that was a nice touch. I have been looking into getting a book about St. Francis. Interesting timing of your post for me.