The Getty Center and J.M.W. Turner 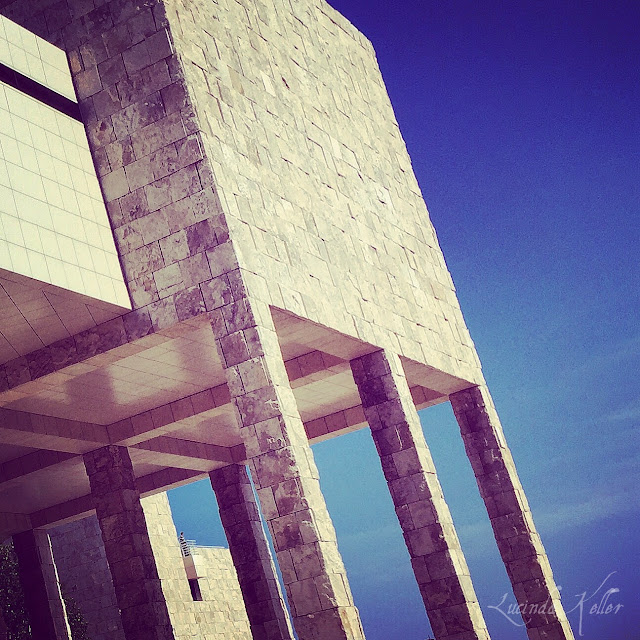 Being an art teacher, I thought it was important to go see the big J.M.W. Turner exhibition going on at the Getty Center. While my mom is a huge Turner fan, I'm sort of ... on the fence. However, I love his painting of the Roman Forum, which is part of the Getty collection. 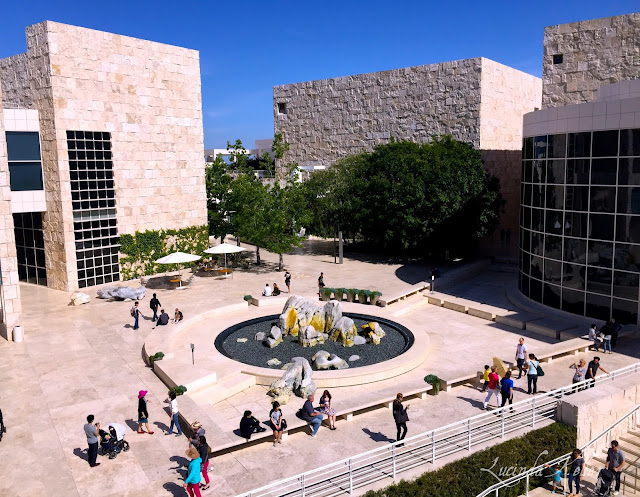 Strange to see the big fountain without water, because of the drought. They are also letting the lawns go. Kind of strange and sad. 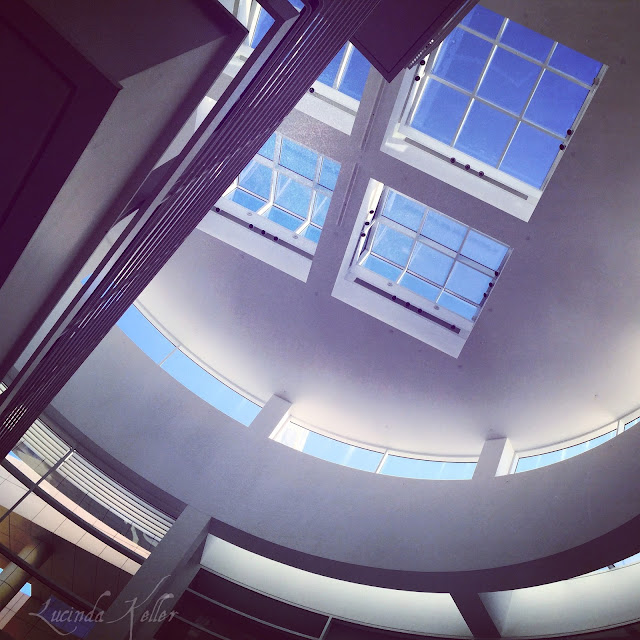 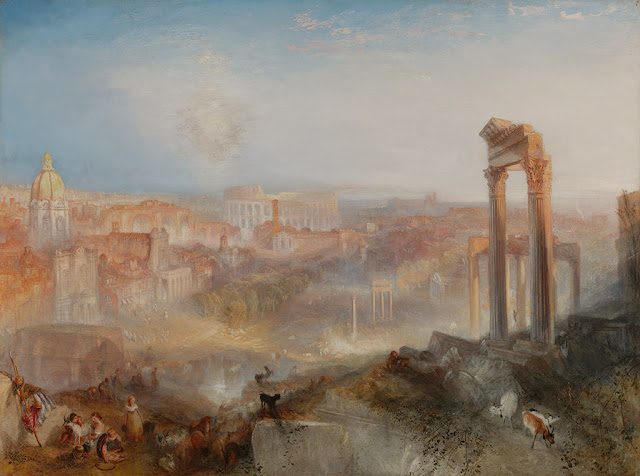 Yep, this is the one I absolutely love. Obviously, my whole Italy obsession might have something to do with it, but I do think it's just a beautiful painting.

This next piece is usually how I think of Turner, with a very limited palette. (In a way I'm wrong because his earlier work is very different, at least to my eye.) It's terrible to say but the brown and golden earth tones somehow remind me of the 1970s.

I know it's ridiculous and irrational, but there you have it. I think the later paintings bring up a sense memory of the colors people used to do that weird "antiquing" to their perfectly good wood furniture. Remember that? Anyway, like I said, I think my issue with his palette is in his later work.

What I do love is his dynamic movement in nature, the sense of mystery, and his portrayal of action ... and then also way he layers the paint with his brushstrokes and varying textures. That's a lot to appreciate.

Snow Storm-Steam-Boat off a Harbour's Mouth
exhibited 1842
It's now part of the Tate, London's huge Turner collection. The exhibition was done along with them. 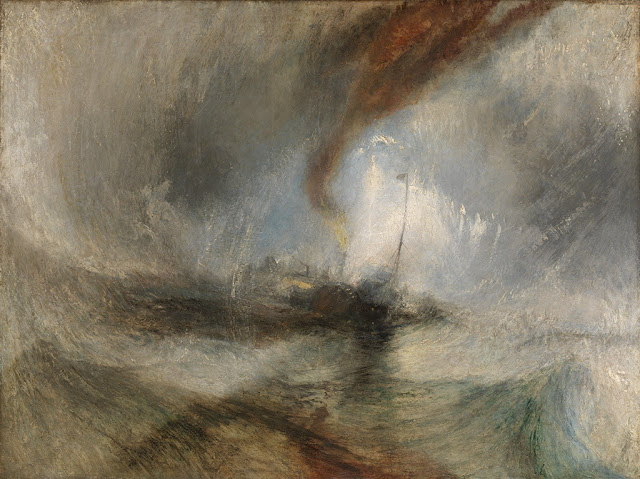 The moon is up, and yet it is not night.
The sun as yet disputes the day with her.
~Lord Byron, Childe Harold's Pilgrimage (1812-18)
as altered by Turner

There were over sixty "key oil paintings and watercolors," in the show. It was huge. What I didn't know, frankly, were Turner's watercolors. Turns out I am a fan. I wish I could have photographed some of my favorites for you but there was no photography aloud so ... I dragged these off the exhibition website. We'll see how long I get away with it, but I want to share these with you! 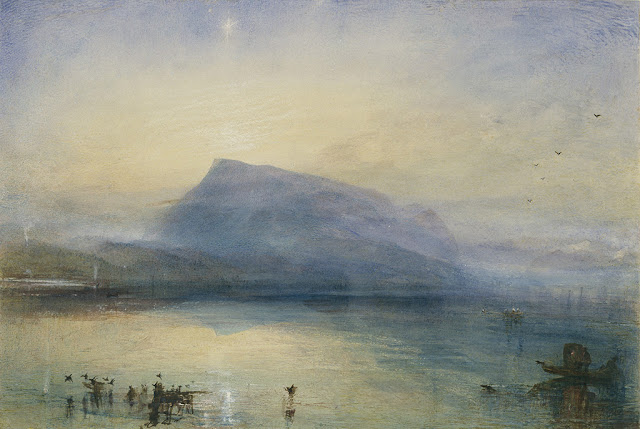 Beautiful right? If you love watercolors, and you are driving distance, you should head over there. It goes until May 24th, so you have a little time. What's great is that he did watercolors on location, so you have these great places like Venice and Switzerland for subject matter and they are totally fresh and alive.

But look what I found! This quick video shows some of his watercolors and talks about them. I wish they showed his pieces of Venice, but here you go!

I haven't seen the biopic "Turner" yet. I've heard mixed reviews but I am sure I will see it. I love a biopic, especially when they are about artists.

Here is the trailer, in case you are interested in renting it. After the trailer is an interview with the actor Timothy Spall, who plays Turner, along with scenes from the film.

This 16 minute video shows how they recreated the paintings and bought an old place and gutted it to recreate Turners home. Very cool. 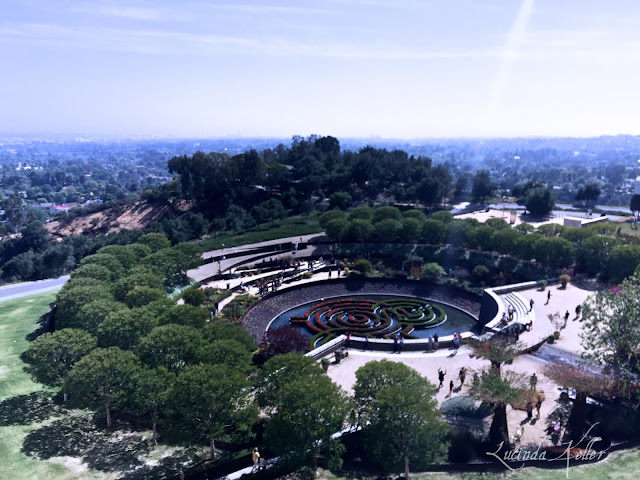 Above you can see the lawn turning ... but the garden was still blooming with color. 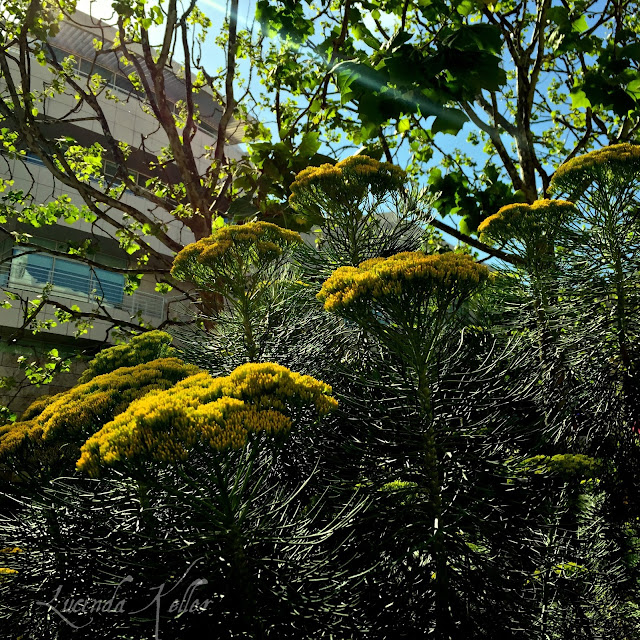 I took my friend Karen with me, which was great, because it was her first time there! I love taking newbies to the Getty and other great places in the city. There is so much to see and do here, that people don't always get around to.

It's difficult to motivate sometimes, because things are so spread out, and if you have never gone somewhere before it can feel like pain in the neck, with the logistics of everything.

The thing is, it's worth it! 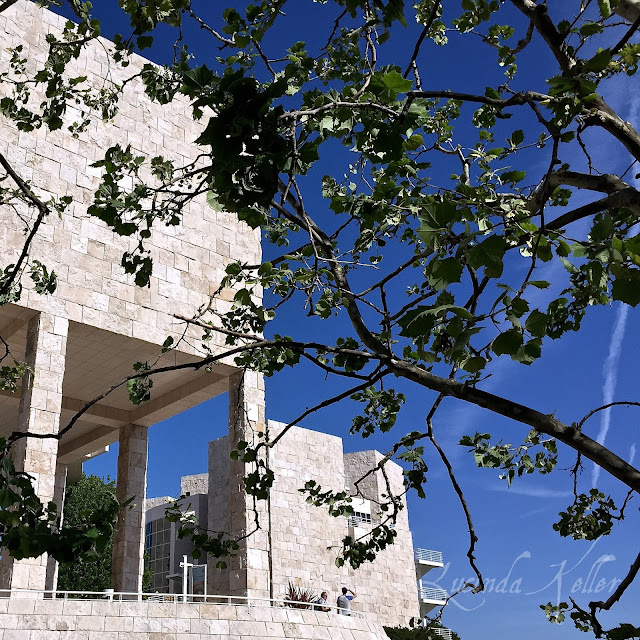 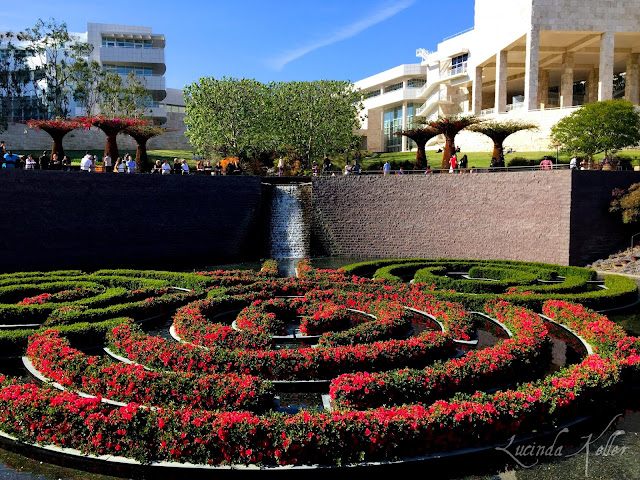 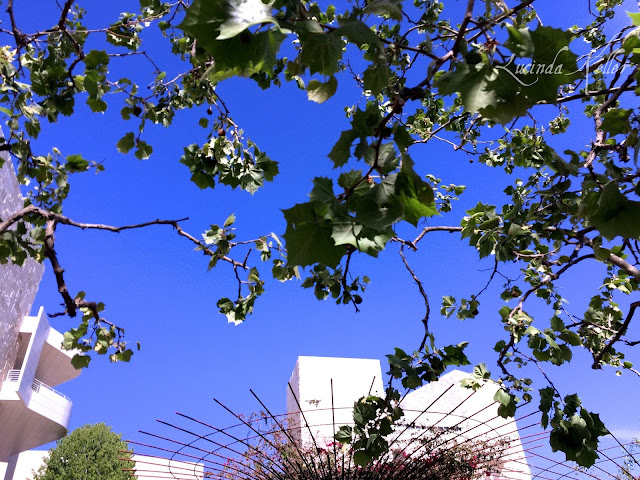 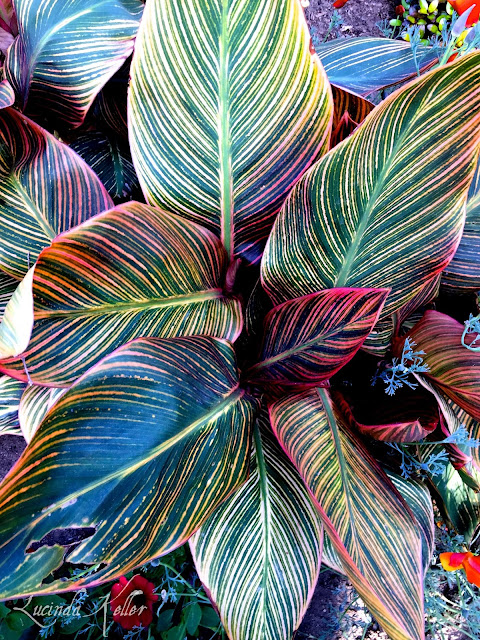 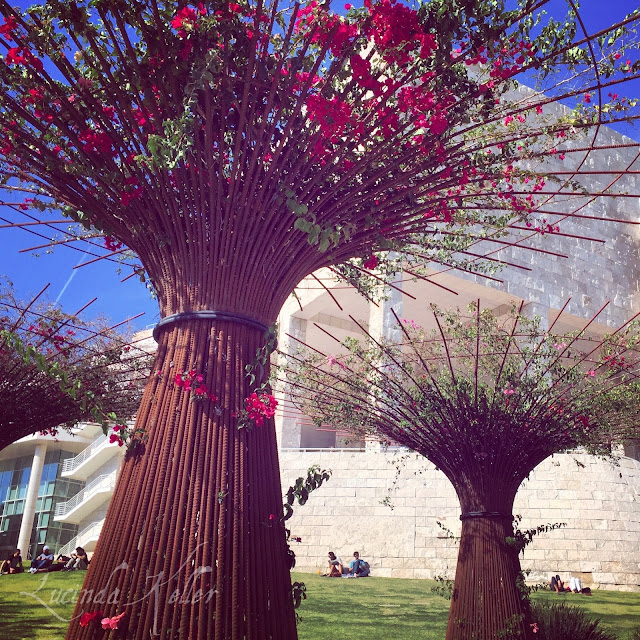 There's a sketch at every turn.
~J.M.W. Turner 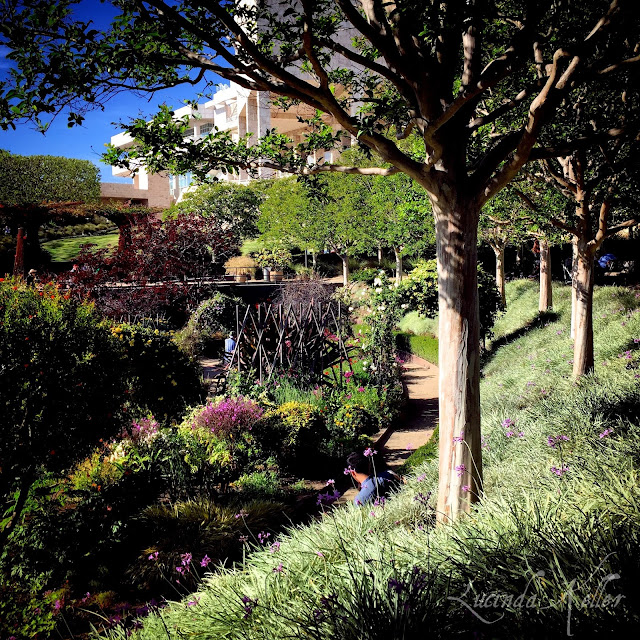 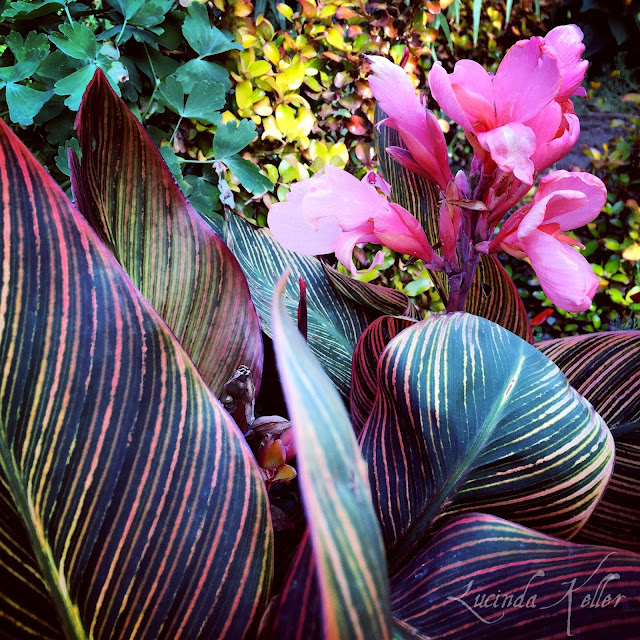 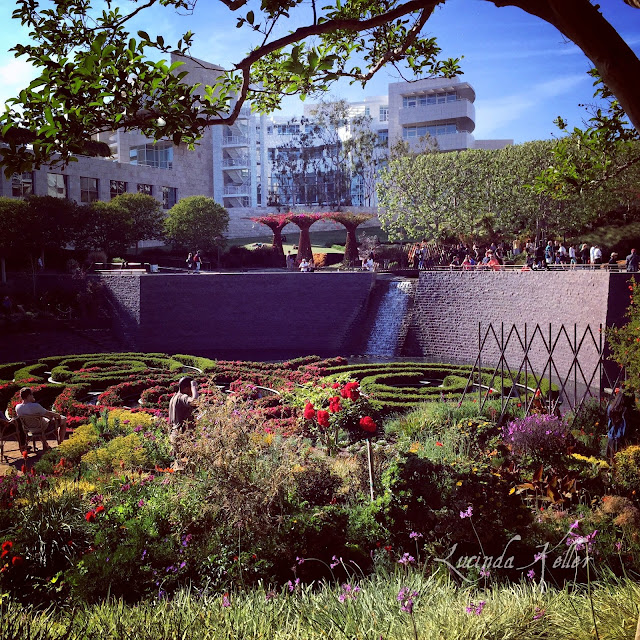 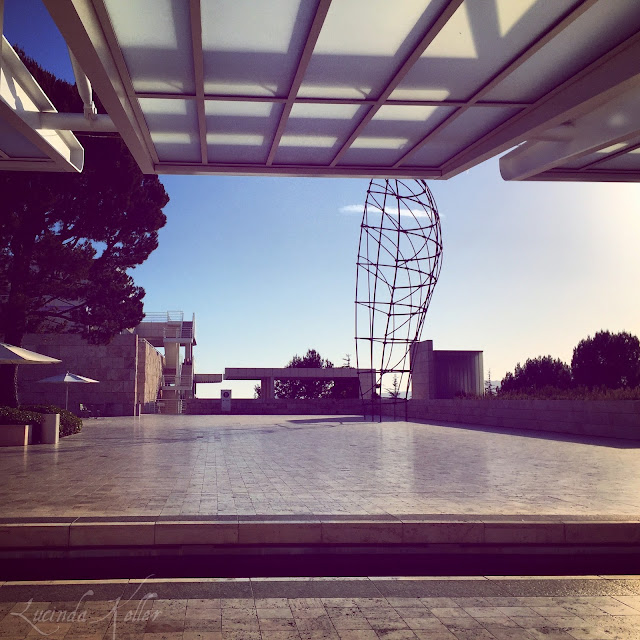 Here is a little documentary about Turner. You can see more of his watercolors at the beginning of the doc and then at 29:50 he goes to Italy, and shortly after are some watercolors of Venice. :)

My job is to paint what I see,
not what I know is there.
~J.M.W. Turner

Link to the Turner/Getty page here.

I think I am more impressed with the Getty Center than Turner. It is really beautiful there. The Gilcrease Museum in Tulsa has many Turner paintings.

I love the painting of the forum too. The colours are very uplifting. Enjoy your week.

Grand architecture and gardens...that alone is worth the trip! I need to return to view the videos at length...thanks for all the work you put into your posts, Lucinda! Sooooo educational!