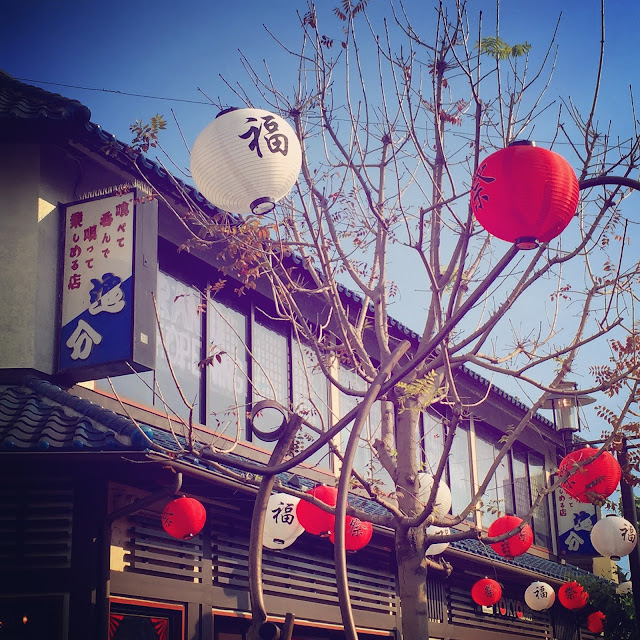 My friends Erin and McKenna, visiting the museum with me ... 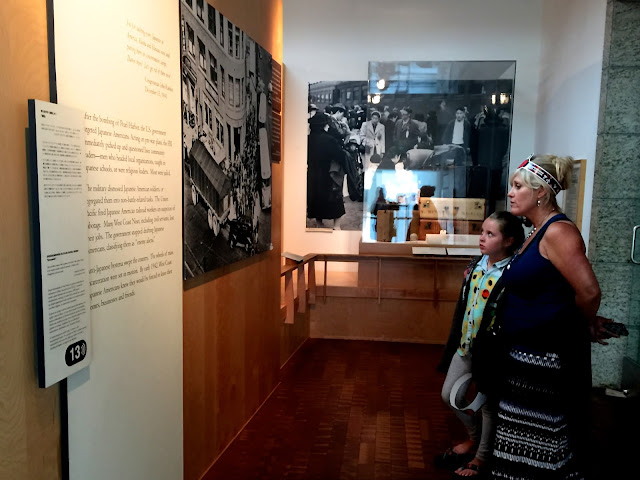 Coming of the Immigrants, Part of the permanent exhibition ... 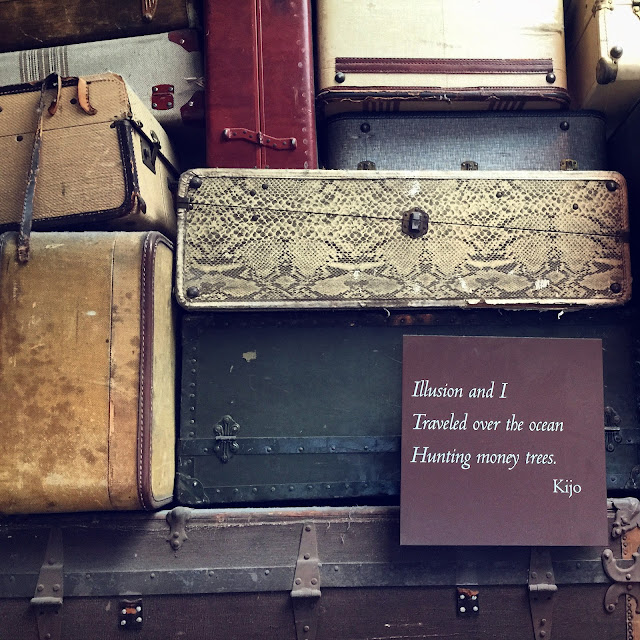 Illusion and I Traveled over the ocean
Hunting money trees.
~Kijo 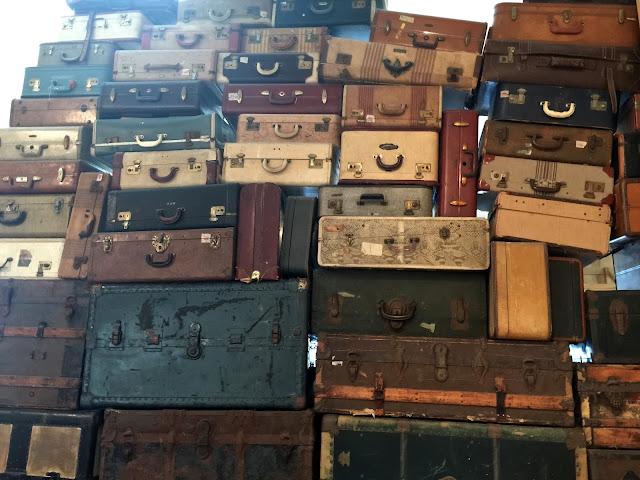 Wall of Suitcases and Trunks
by Hirokazu Kosaka

The importance of Hirokazu's work
Is that it recognizes that the most important things
Are sometimes the simplest.
The space between the heartbeats
And the suitcases that carries
More that people's belongings.

Suitcases, trunk, collection of the artist.
Re-created for "Common Ground," 1999 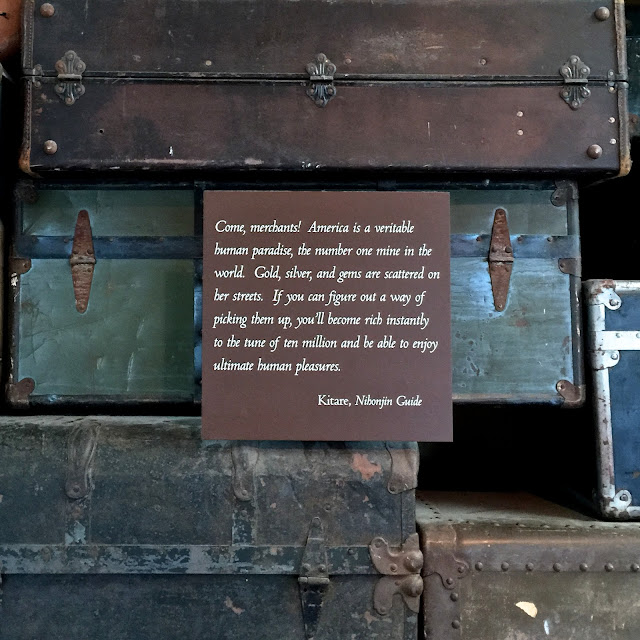 Come, merchants!
America is a veritable human paradise,
the number one mine in the world.
Gold, silver, and gems are scattered on her streets.
If you can figure out a way of picking them up,
You'll become rich instantly to the tune of ten million
and be able to enjoy ultimate human pleasures.
~Kitare, Nihonjin Guide 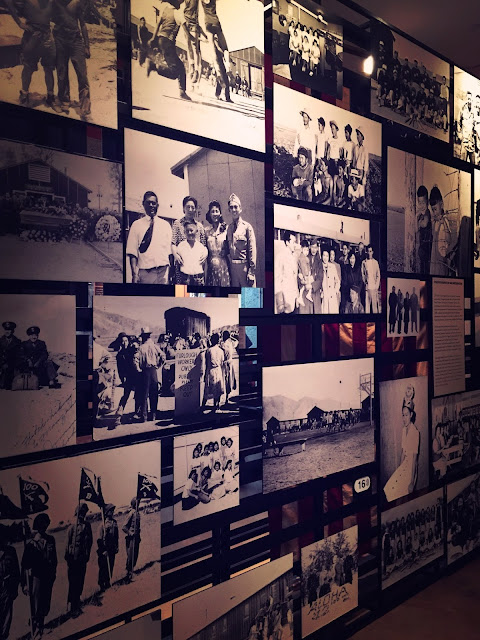 The exhibition of the Japanese interment camps ... 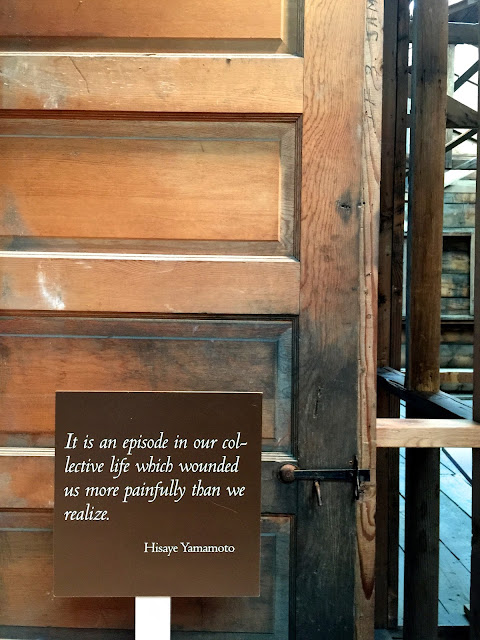 There were 10 internment camps, (10,000 incarcerated Japanese Americans) during WWII, after the bombing of Pear Harbor. It's a terrible part of our shared American History. This is a reessembled barrack, is from one of the camps. 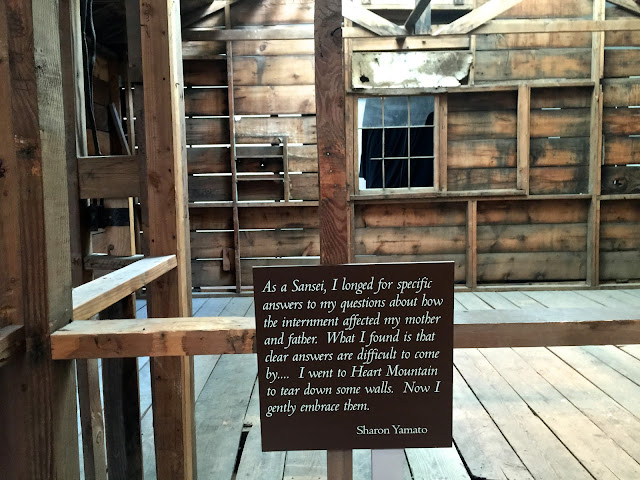 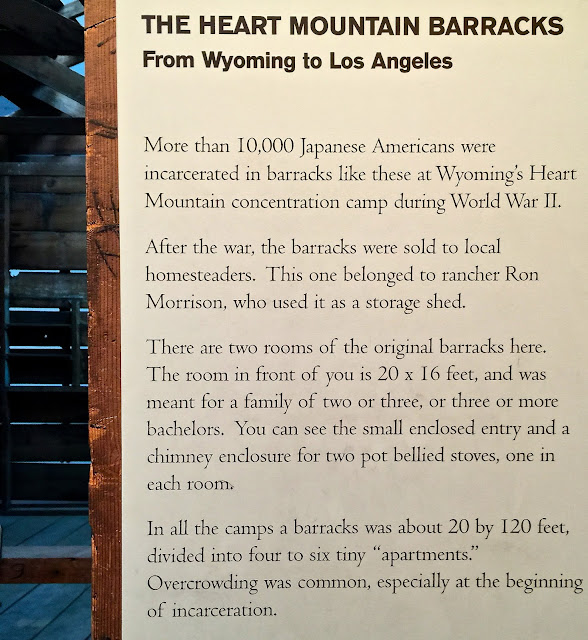 Here's a tour of the museum with George Takei.

After our trip to the Japanese American National Museum, which started with the Hello Kitty exhibition, we headed across the street into the Japanese Village Plaza to have some lunch! We had sushi at Maruya, where I'd never eaten before. It was yummy and our waiter was awesome!

McKenna having some miso! 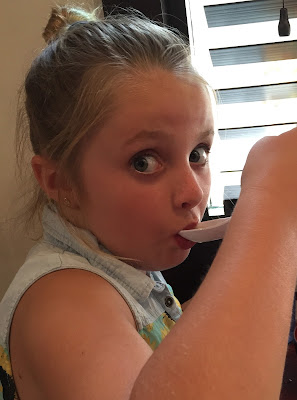 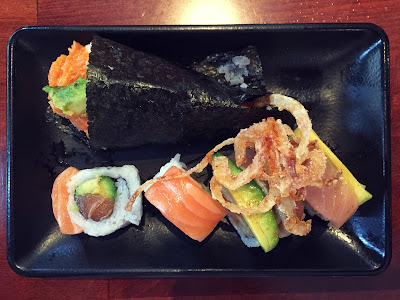 After lunch? Mochi ice cream!!! Shortly after there were some serious Karaoke performers! 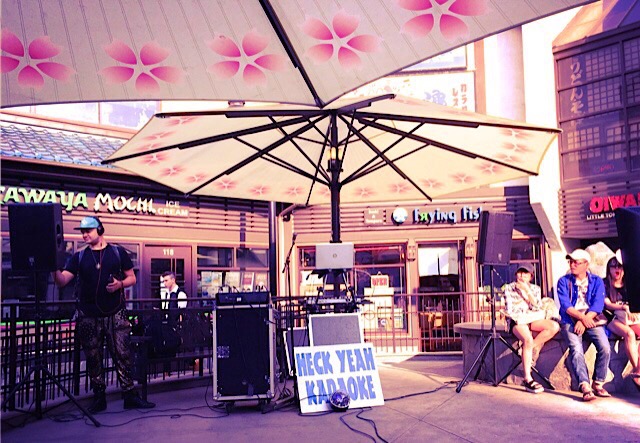 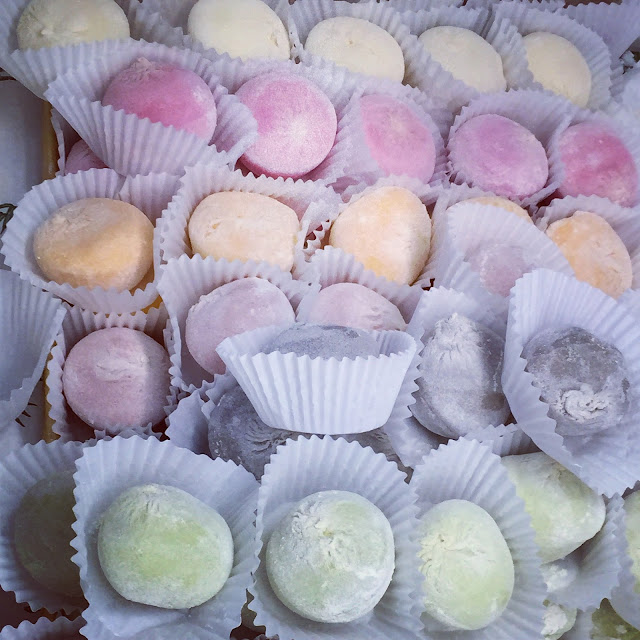 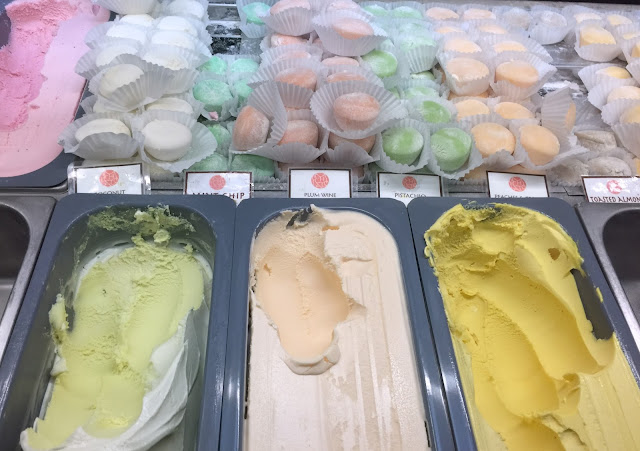 Mochi, if you've never had it, is ice cream on the inside and a thin sticky rice cake layer on the outside with a dusting of cornstarch so it's not super sticky when you are eating and when it's being formed. I think you can get it these days at Trader Joe's.

I had chocolate and green tea mochi! 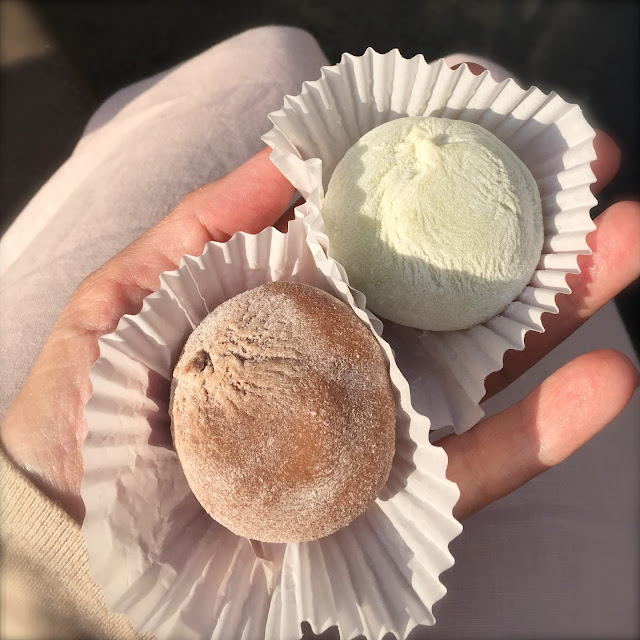 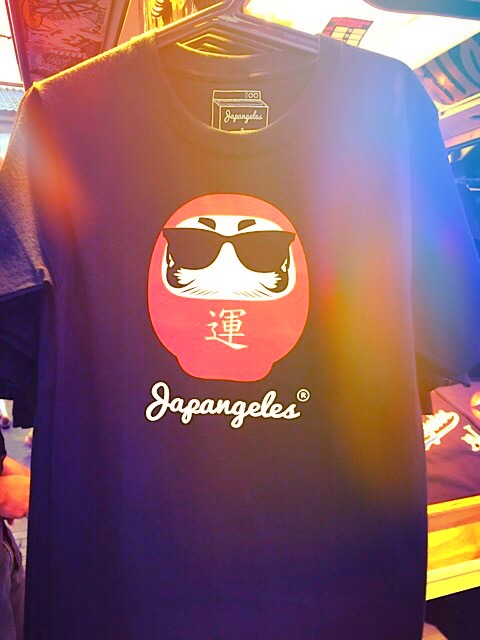 Unfortunately, by the time we got there, the Japenese American Cultural and Community Center was closed, along with this great little coffee place and Ukulele shop, called U-Space!

I've been obsessing on learning to play the Uke lately. In part, I think, because I used to play the harp which a huge and hard to carry and takes forever to tune. On top of that, my great grandmother used to play for us! 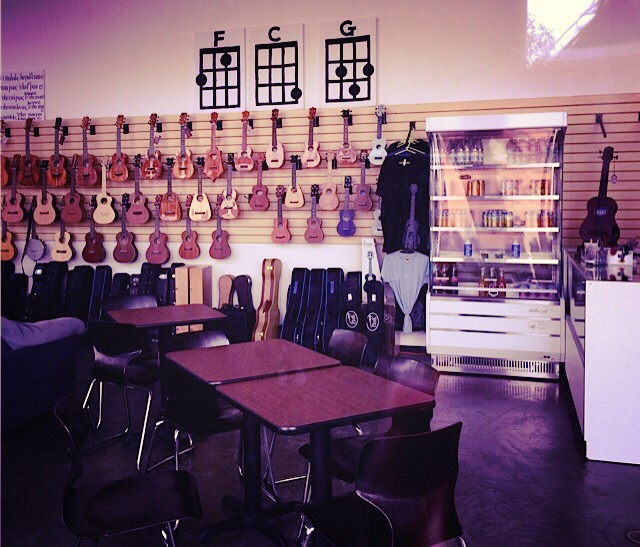 Here's one of the instructors at U-Space, Jason Arimoto. 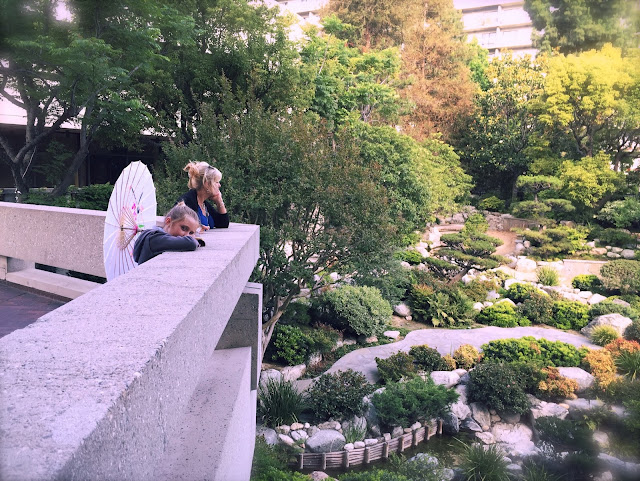 These photos were taken from above, looking down into the garden, because unfortunately it was closed. Something to return to! 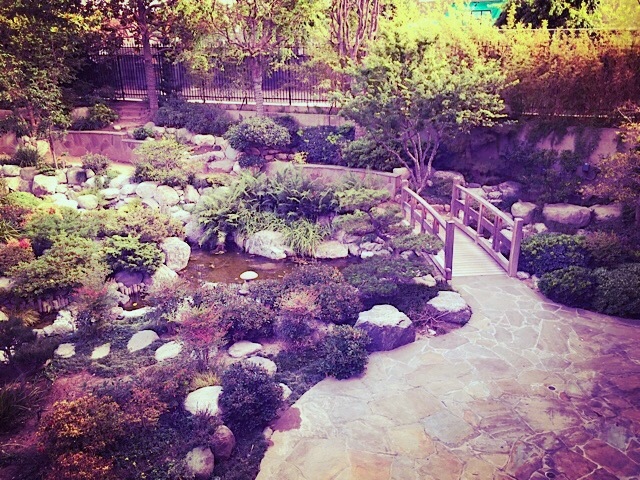 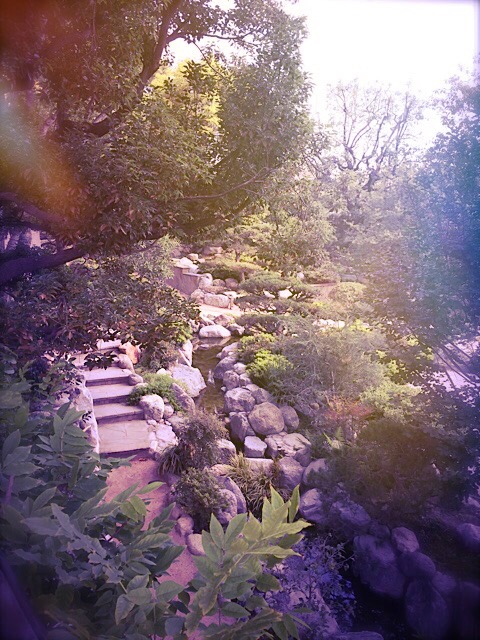 Culture binds us,
gives us meaning
and provides us with foundation ...
it surrounds, entangles and supports our daily life,
a matter of learning "what it is we have to know:
to belong within a family and community.
~ David Mas Masumoto 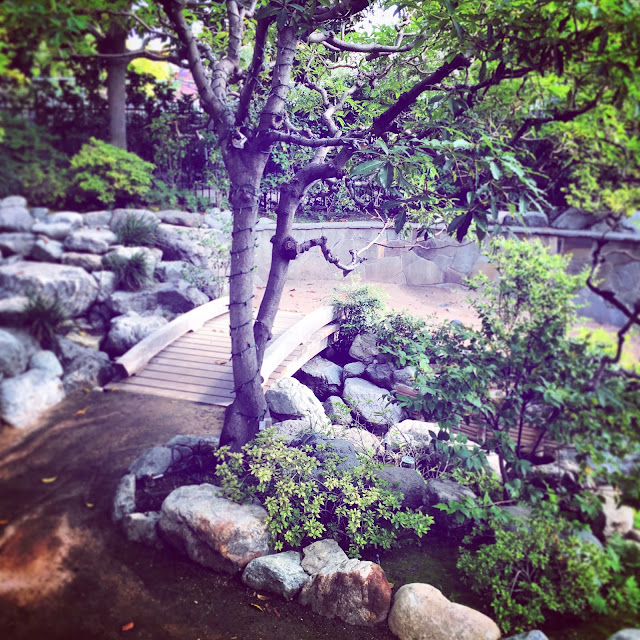 We ended up walking over to The Last Bookstore. It was a little farther than I thought but they were happy to have gotten to see it! 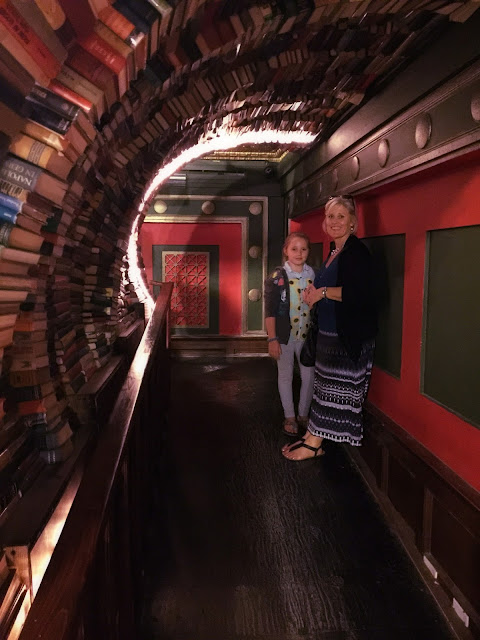 An artwork that was being shown in the gallery area upstairs ... 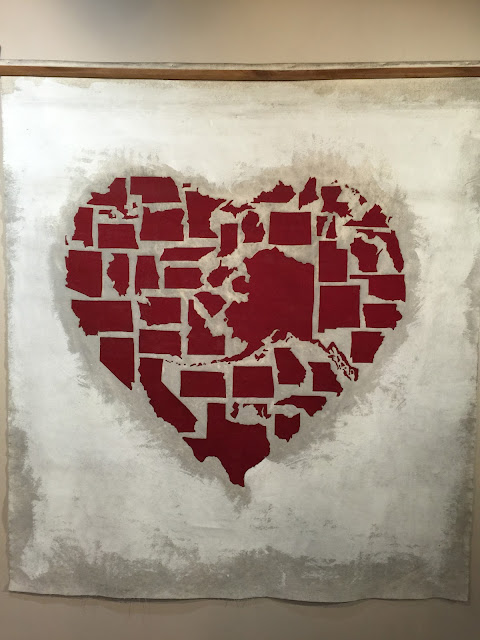 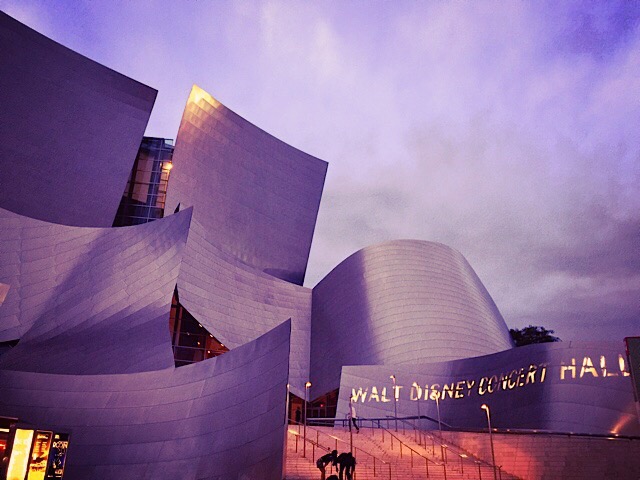 and The Broad museum below, which opens in September of 2015! 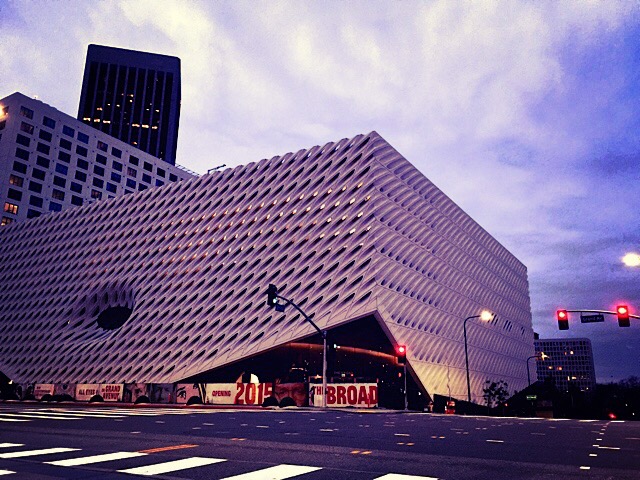 I'm off to the art store! Hope you enjoyed this little visit downtown to Little Tokyo!

Don't know this museum at all (but I can tell I'd love it.)
Anyway, I love old suitcases!!!
Thanks for the tour.
And definitely take up the ukele. (Hey, it's only 4 strings.)
And you can play it around the campfire.

I was lucky enough to hear Jake Shimabukuro a couple of years ago.
Oh my! He takes the uke to a whole 'nother level.

(How is it all the ukele impresarios are Japanese?)

Oops, that's not how you spell ukulele!
My bad.

Lucinda, you sure know how to have fun. I love all things Japanese and my grandkids hear me say, "I'm turning Japanese," often. The ukulele is pretty easy to play and I think you'll take it up much quicker than I did being the young sprite that you are. You would have died seeing me play along on youtube. I now need to learn Penny Lane for my new granddaughter.

Wow! all those suitcases really makes you think how many lives were changed by the Camps. We have a dark history in Canada of the same camps. In fact a lot of Japanese Canadians were sent south to some of the Camps in California. Have you ever read 'Snow falling on Cedar' ? it's such a good book about this issue. Lovely places you have there indeed!

If you want your ex-girlfriend or ex-boyfriend to come crawling back to you on their knees (no matter why you broke up) you have to watch this video
right away...

Get professional trading signals sent to your cell phone every day.

Follow our signals NOW and profit up to 270% daily.