OK, so right off the bat I'll tell you my pick for best picture. I'd like Spotlight to win. It could be the Revenant but It's probably between the two of them, so it has a good shot. 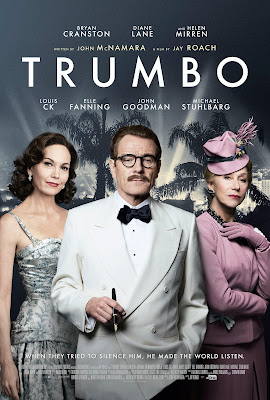 My favorites this year are probably not going to go away with any of the big awards. First of all I LOVED Trumbo and Brian Cranston was amazing. I think DeCaprio will win, and after a few nominations it's "his time" but Cranston ... loved him in Trumbo. I will say I'm biased toward movies about old Hollywood, but the movie comes together as a whole, in a kind of perfect way and all the performances were solid and the script was tight and very smart. Even the smaller roles felt fleshed out, alive and interesting. 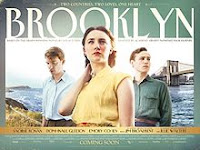 My other absolute favorite was Brooklyn. Maybe it's because so many of the movies and documentaries were so dark, but it was wonderful to see a really beautifully made love story that was charming, had genuine emotion that didn't feel like a manipulation (which many American love stories of the last couple of decades do), that was well acted and directed, and wasn't cheesy or over the top. And I loved the two leads.

Here's a piece I enjoyed with Saoirse Ronan (Brooklyn) and Kate Winslet (who was great in Steve Jobs and I have loved since Sense and Sensibility!) interviewing each other.

Like I said, I really liked Spotlight. It's great film and an important one, on a lot of levels. I'm the pickiest about acting and everyone was so solid and it also didn't feel too "shiny Hollywood" which wouldn't have been right for the subject matter. I also thought Bridge of Spies was really good, solid film, and I thoroughly enjoyed it. I don't know that it will, but it should win for art direction.

I also thought Room was great little film and it really stayed with me.

I thought about it for days. Such a great connection and wonderful chemistry between the two main actors. Some child actors can be be a bit irritating in their precociousness but Jacob Tremblay was great. Here's a cute interview with him, and Brie Larson who is nominated and favored to win. (For good reason.)

Loved what Brie Larson says about working with him here ...

Everybody has heard about the controversy with the lack of diversity in Hollywood, and I think much of the problem starts with the movies that get made and how they are cast. Everyone wants to cast a "sure thing" and not stick their neck out with casting outside the box, for fear of losing money, tickets sales, and their jobs. I get it, but come on. There are times when a movie is set in Ancient Egypt and everyone is a white as I am.

It is also ridiculous that Idris Elba did not get a nomination for Beasts of No Nation. He should have been nominated in the supporting actor category. I've seen all but Sylvester Stallone in that category and I stand by my opinion. It should have also gotten a best picture nod.

It is a really difficult movie to watch, because of the subject matter and how well it's acted. It's disturbing what goes on with children and child soldiers, and how families, communities and countries are destroyed. The filmmakers did a great job of showing that and immersing you in that world.

Maybe people didn't want to see that, but if you are given the responsibility of nominating the best of the best, deal with it and watch the movie! They must have watched that serial killer movie to give Charlize Theron an Oscar, right? Or maybe people were having their personal assistants vote. (Nothing against Charlize here.) Is it because she's a beautiful white woman who made herself look ugly? I don't know, but there are serious questions when out of 60 actors in the last three years, there's been 3 or 4 non white actors nominated.

OK, now that I got that off my chest. I want to say that the little boy was also brilliant. He was totally present and filled with the life of his character. It was so moving, powerful, and ultimately heartbreaking, and frankly I could never imagine watching it a second time. I had a very large margarita while during my viewing. (The benefits of having a screener, you can take a break and make yourself a cocktail!)

Here's a short featurette about the child actor who plays Agu ... please watch.

Since Idris didn't get a nomination, it's a toss up for me with best supporting actor. Mark Rylance gave a fascinating character portrayal in Bridge of Spies, which I've mentioned is also a movie I really liked a lot. If you haven't seen it, you can stream it on Amazon Prime right now. I also really enjoyed Mark Ruffalo in Spotlight, which I've mentioned I'm rooting for for best Picture. He's great. (And still adorable. Just saying.)


And then, there is Christian Bale, in The Big Short. Who knew a movie about the guys who bet against the housing market would be so entertaining?! Amazing script and direction! Bravo Adam McKay on a great film. Anyway, back to Bale. He completely disappears into a role the way Daniel Day Lewis does. Weird little quirks, speech patterns, and totally different energy and persona with every role. He's another actor that is just mesmerizing to watch and in The Big Short he plays an odd, kind of dorky, brilliant guy and was totally believable. It's as if he was channeling.

Christian Bale interviewed on The Big Short and the real person he played. He is obviously growing a  beard for his next role!

Here is a Hollywood Reporter Roundtable with Actors and creators of the film.

I'd heard a review about The Danish Girl and the reviewer said he'd wanted to be more emotionally invested. Maybe it takes a little while to become invested, but as I sat on my bed with tears streaming down my face toward the end of the movie, I thought (in reference to the reviewer) "What's wrong with people? Are they made of stone?!" Anyway, it was a lovely film and of course, Eddie Redmayne was phenomenal (I think he always is, and even was as the only tolerable thing in Les Mis.) Everyone is expecting Alicia Vikander, as Redmayne's wife, to win best supporting, and she did give a beautiful, strong but vulnerable performance.

The real subjects for the film were both artists. Lili the transgender woman, was a landscape painter and Gerda was an illustrator who did a lot of fashion illustration as well as portraits of Lily.

Here is a video slideshow of some of Gerda Wegener's paintings and illustrations ... (beware, though most are elegant, sweet or fashion oriented, a few are very racy!!!) There is also an exhibition of her work going on right now in Denmark at the ARKEN, until May.

Here's a short featurette on The Danish Girl, which plays after a portion of the trailer, with interviews with the director and leads.


I've only seen 3 of the 5 best supporting actress nominees. The other two I saw were Rachel McAdams, in Spotlight (Go Spotlight!) and Kate Winslet in Steve Jobs. Like I said, love Kate. I think it's worth seeing Steve Jobs just to watch her and Michael Fassbender who are two of the greatest actors working and like Christian Bale, both become unrecognizable in their roles.

As far as the Revenant, it's worth seeing on the big screen if you are planning to see it. It's one of those movies with big sweeping shots of landscape and really it is beautiful. Well, it's also violent and stressful and gruesome and I had to cover my eyes with my cap, over and over. So, see it but bring your hat.

I think that pretty much covers the acting categories. Apologies to the few I haven't seen.  I'm going to try to see the rest of the feature length documentaries this week, which can be streamed on Netflix and Amazon Prime, and I'm going to a screening of the documentary shorts on Friday night at the Egyptian. So excited!
The Foreign films will have to wait.

OK, this was a way longer post than I intended and I don't know if anyone will read my musings on the nominations but there are!


Hope you are having a great week!
Blessing, light and movies!

Do let me know of the foreign films as I seem to love them. Only film I've seen was Revenant out of the lot. But, I love Brian Cranston (from Breaking Bad addiction) and Eddie Redmayne (sp.) is such a great actor; watched him in Pillars Of The Earth. I am surprised you watched Room, though I've heard nothing but raves about it. I'm too afraid to watch it. So many good actors now, it must be impossible to vote. I've just watched Babel, that is how far behind I am.

You could be qualified to receive a $1,000 Amazon Gift Card.

Get professional trading signals sent to your mobile phone daily.