On the Town ... Nights in Los Angeles 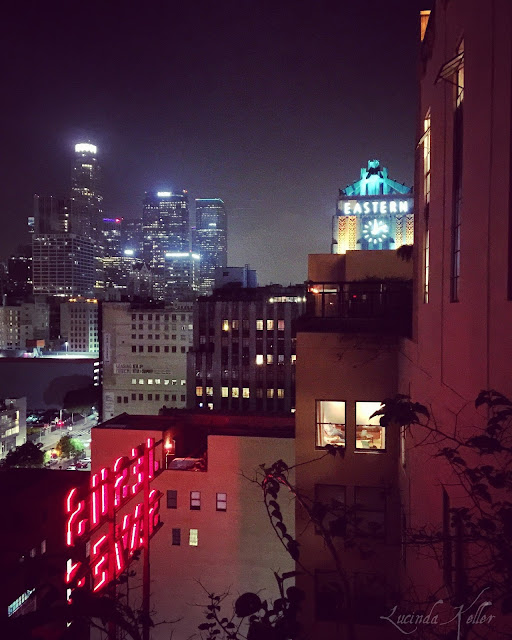 Upstairs
at the
Ace Hotel

From looking at my blog, it might look like I'm out every night. Truth is, most nights I'm perfectly happy to go home after work, kick back and watch Netflix. (6 out of 7 nights?) Once I am home it would take a crane to get me out of the apartment.

But, here and there (usually if I'm planning ahead and bring a change of clothes to work, or if I am committed and/or have tickets to something) I get out and about, on the town. Remember, these are over the course of 4 months.

Here is a view from the bar at the top of the Ace Hotel back in January. I was more interested in taking pictures outside than the loud party music inside. Pretty sure it was a DJ but I can't remember. That tells you something! Love the view, especially of the Eastern Columbia Building. 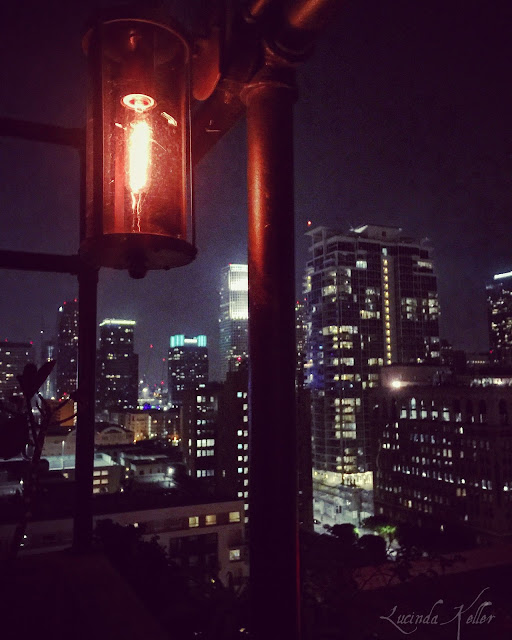 And apparently on warm nights, people do get into the jacuzzi! 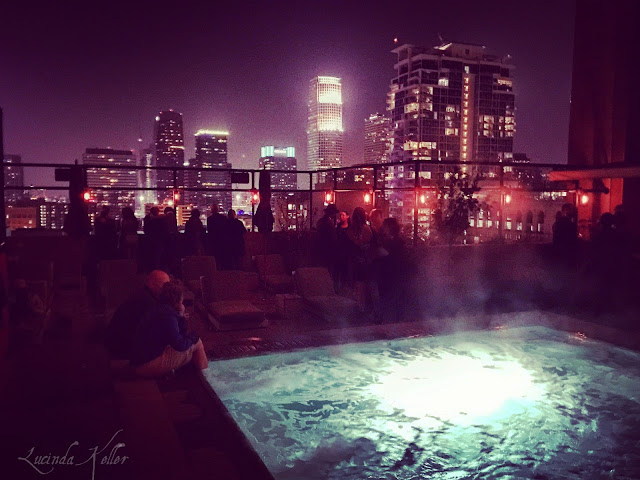 Here is another night, I made it out of the house! 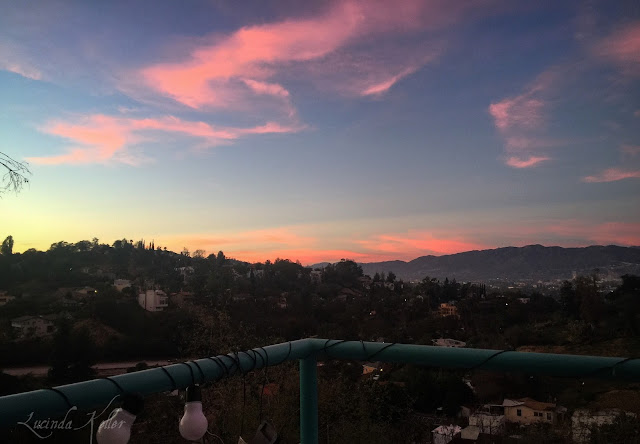 The lovely folks I work for have this fabulous view in Echo Park. They had a lovely gathering and my boss made fabulous crawfish etouffee. (She's from Louisiana so it was authentic!) What a gorgeous night it was! 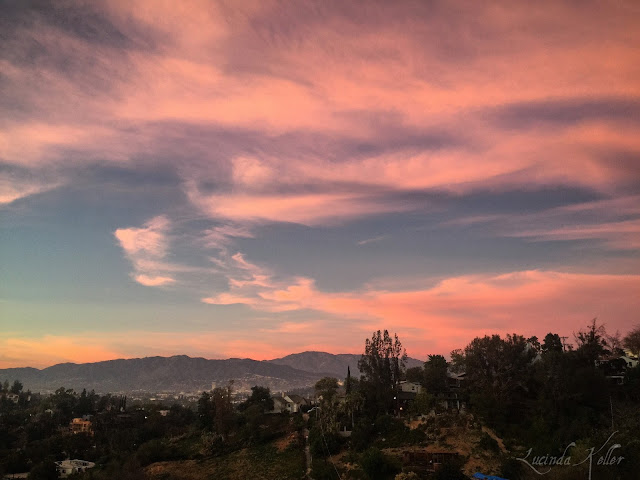 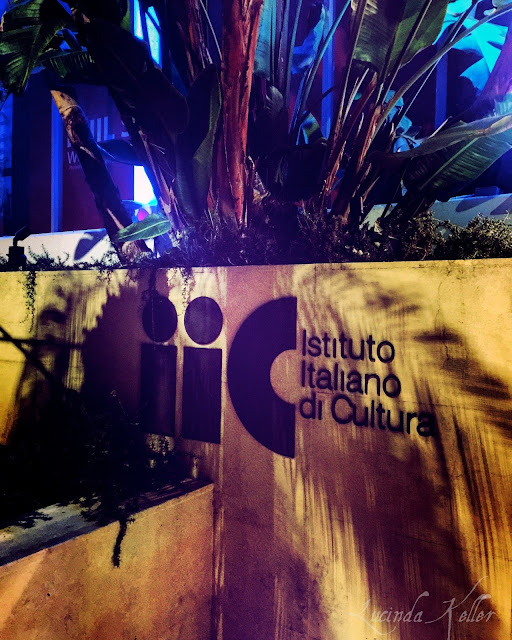 This was a cool, and different thing to do, in February. I rarely get to the events at the Instituto Italiano di Cultura because usually they are mid week, on the other side of town, and at 6:30pm. Not convenient. But, this one was on a Monday! (My private student day.) It was a birthday celebration for Gioachino Rossini (1792-1868) with selected performances of his work.

The introduction was by Maestro Carlo Ponti, of the Los Angeles Virtuosi Orchestra. (And son of the elder Carlo Ponti and Sophia Loren.) And, just as an aside, this man was a total babe. Seriously, google him. And, yes I checked, he's married.

The recital had pieces from Il Barbiere di Siviglia (Barber of Seville) and  Les Soirées Musicales. 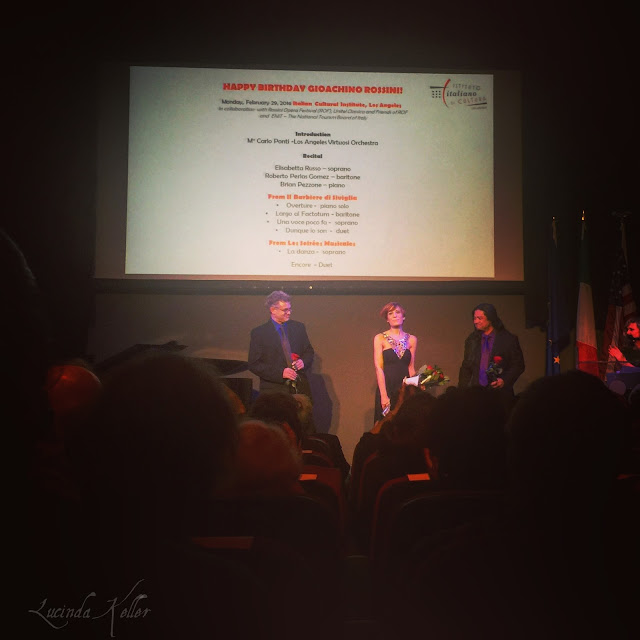 Look, someone was recording at the event!

The IIC is in Westwood, so we walked around the corner to 800 Degrees for pizza and del vino rosso after the show, to continue with the evening's Italian theme. The pizza with truffle cheese was very tasty!

So, the "Rain Room" was apparently very popular in NYC at MOMA, so I wanted to check it out when it came to the Los Angeles County Museum of Art. I waited a bit too long though, and unless you were a member it was impossible to get tickets, so I figured it was time to finally renew.

My parents were already members, so we all got tickets for an evening in March, and our reservation was for a Tuesday night at 8:45pm! So we met at the museum and ate at Ray's, the restaurant there before heading in. The food was great, but the portions are small by U.S. standards. 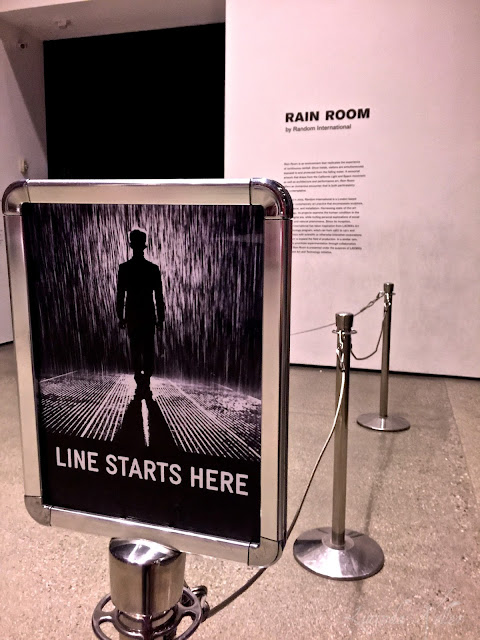 from thewebsite:
"Random International’s Rain Room (2012) is an immersive environment of perpetually falling water that pauses wherever a human body is detected. The installation offers visitors an opportunity to experience what is seemingly impossible: the ability to control rain. Rain Room presents a respite from everyday life and an opportunity for sensory reflection within a responsive relationship.
Founded in 2005, Random International is a collaborative studio for experimental practice. They use science and technology to create experiences that aim to question and challenge the human experience within a machine-led world, engaging viewers through explorations of behavior and natural phenomena. In the decade following the studio's inception, the focus of Random International’s artistic practice has continuously evolved and today encompasses sculpture, performance, and installation on an architectural scale."
Mom and dad in the rain room ... a very fun place to photograph, as it turns out and you have about 15 minutes in there. 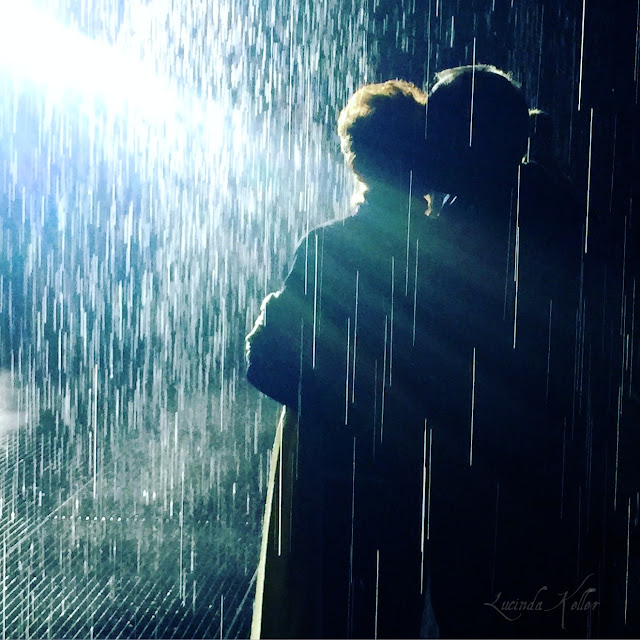 It is light sensitive, so if you are in light clothes and being hit by the light, you don't get wet as walk through ... slowly. At least that's the idea. Apparently, little kids get soaked because they are too quick for the sensors! (Raincoats are recommended for little ones.) 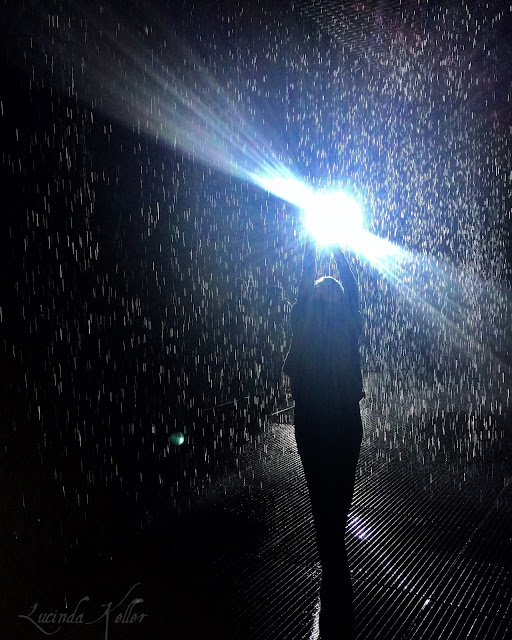 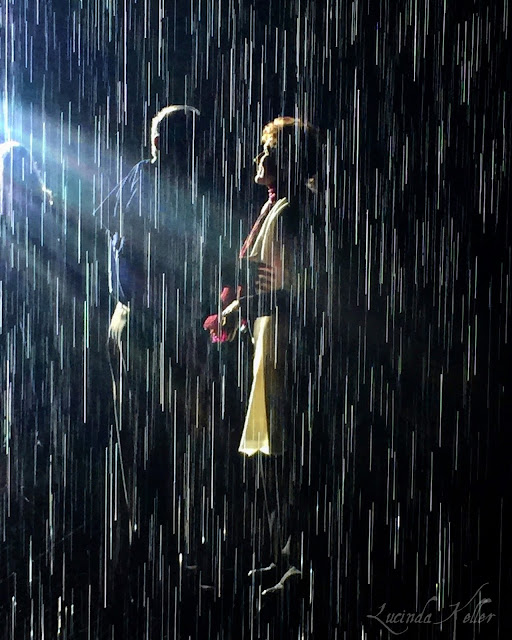 My dad took this one of me, as well. We actually took a lot of pictures! After Prince died they made it purple in his honor.  Love that. 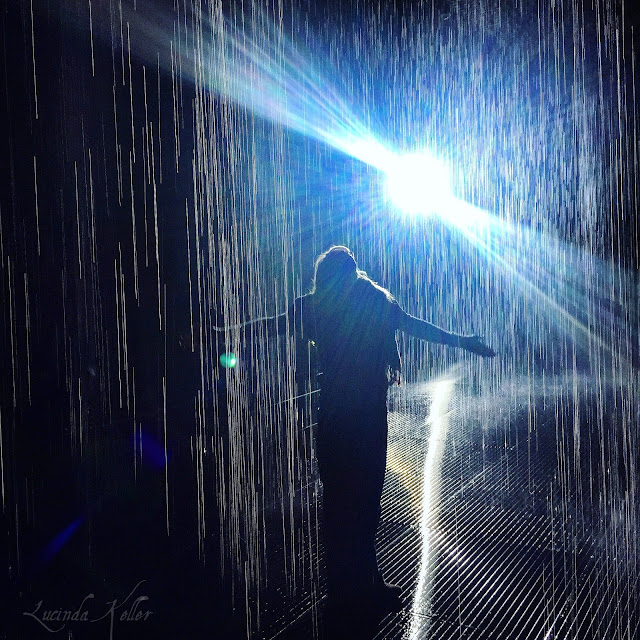 "Rain Room will close as previously announced on Sunday, April 24, 2016. Following conservation efforts, it will reopen on Thursday, May 19, for a limited engagement. While that block of tickets is sold out, we will release blocks of tickets for additional future dates.
Rain Room is a specially ticketed, timed-entry experience. Advance tickets are required. Tickets are not refundable or transferable."
Leaving the museum ...  looking through "Smoke," the huge sculpture by Tony Smith and painting by Alex Israel, called "Sky Backdrop." 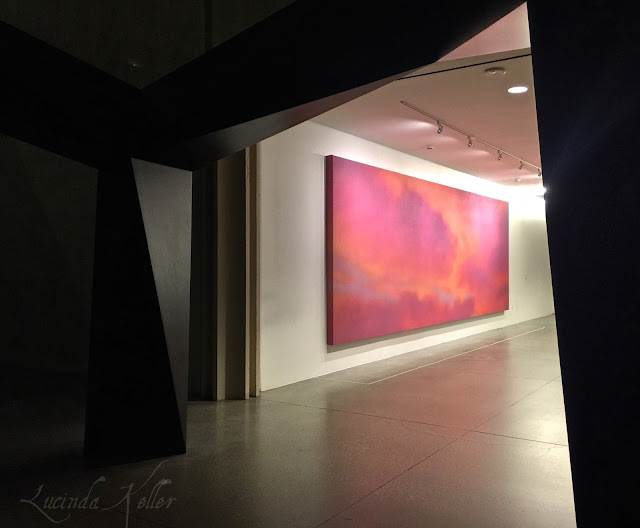 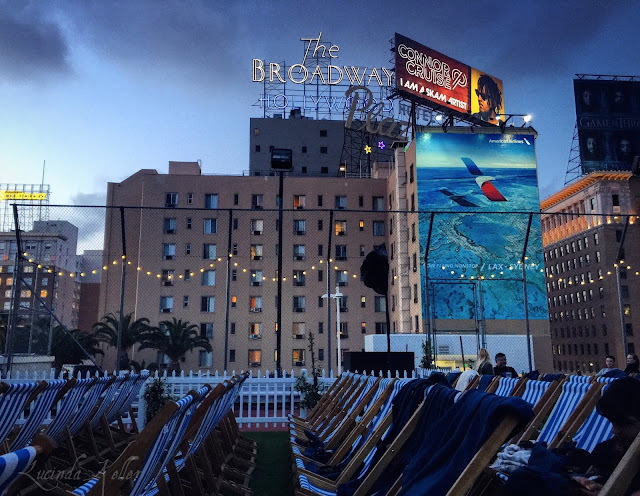 I'm sure I must have mentioned my love for the Italian film Cinema Paradiso (1988). I know I talked about Ennio Morricone doing the score, before the Oscars, because he hadn't won yet. Well, Cinema Paradiso was either my first or second foreign language film. It was that or Camille Claudel (1988), with Isabelle Adjani. (Another great film.) 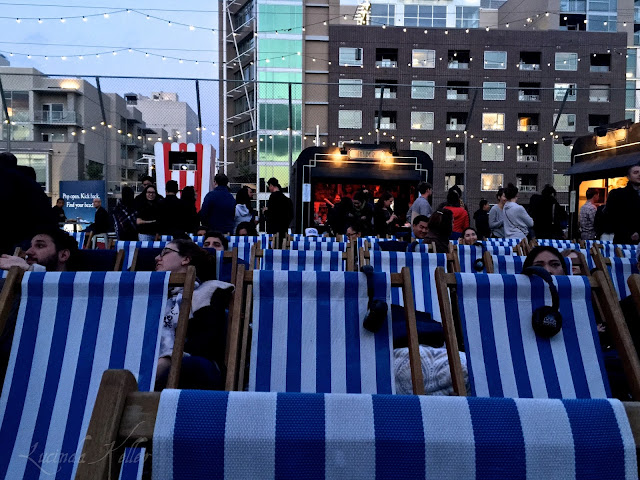 Anyway, I saw it in Santa Barbara when it came out in the late 80s with my sister and my friend Erin. I loved it then, but loved it even more after seeing it the second time, catching it late at night on cable in the early 90s after I'd moved to L.A. Somehow as the years go on it becomes even more poignant and moving. (It's also been a litmus test for boyfriends.)

When I saw the list of movie tickets being released for spring at the Rooftop Film Club, I immediately got on the horn to see if anyone wanted to join me! My friend Lauren who was with me for the Rossini event as well as the Ace Hotel, was up for this as well! AND, it was very exciting because she'd never seen it! 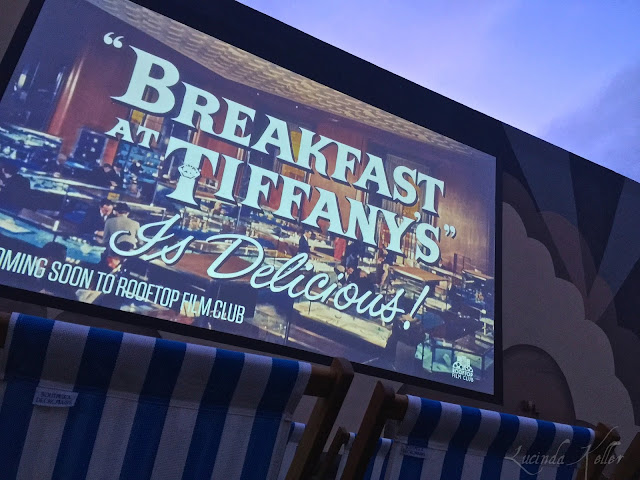 Previews! Breakfast at Tiffany's is coming!  Also, Grease, Clueless, and a bunch of others. You have to be on the Time Out L.A.  email list, because tickets sell out way ahead and fast.  You might have seen my Halloween post about seeing Beetlejuice there.

Apparently, this group has screenings in New York and London but I know there are so many various groups doing outdoor screenings now, so you might want to Google them in your area! Cinespia is another one in L.A. that does outdoor screenings, but at the Hollywood Forever Cemetery. (I saw Barbarella and Dr. Strangelove there.) 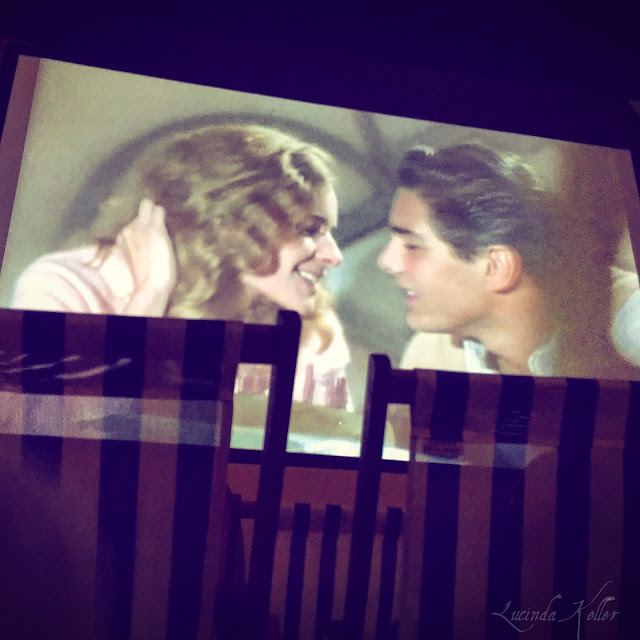 The score is so beautiful, I remember listening to it on my iPod, coming into Assisi for the first time on the train, standing at the window, wind hitting my face. Perhaps for that reason, and all the times I have seen the movie over the years, as soon as the music started at the beginning of the film I started getting weepy, and pretty much cried through 80 percent of the movie. It was awesome.

If you have never seen it, you MUST. But warning, do not watch the "new version" or "director's cut" ... watch the original theatrical release!

Oh, Lucinda, I loved this post! Thank you so much! I'm enjoying these experiences through your blog! I did get to see your handsome conductor and his wife:) We sat behind them when his mom was in Las Vegas last month. If she comes to your area, go see her. She is intelligent, lovely, elegant, funny and interesting. A real class act.

Did you know you can shorten your urls with Shortest and make money from every click on your shortened urls.

Whether your prime concern is taste or variety, Vaporfi got you covered.

With vape juices which comes from food-grade ingredients, their vaping flavors are very smooth and consistent.

Get professional trading signals sent to your cell phone every day.

Follow our signals NOW and gain up to 270% per day.