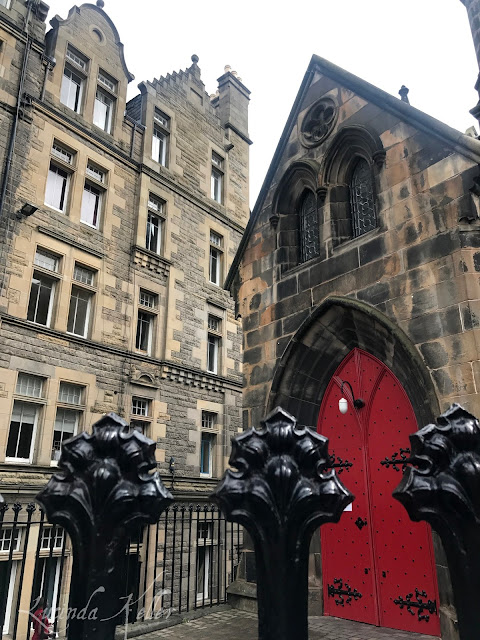 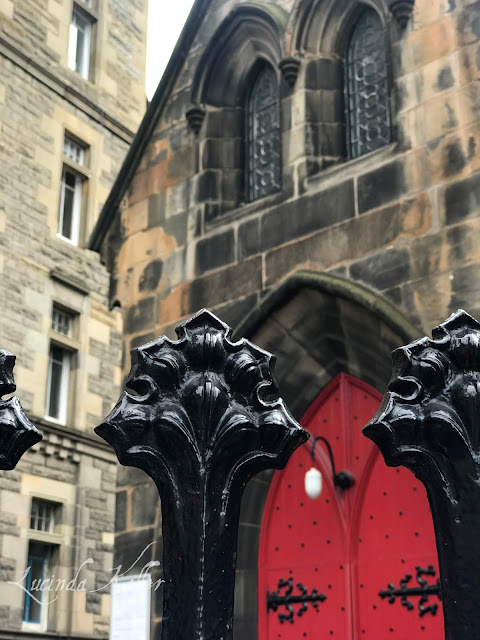 (Sorry for the slight pause, my computer indeed froze and I had to get more RAM!)

Anyway, my parents flew into Edinburgh the same day as I did, but a few hours later and by way of London. We met  in our little flat in Grassmarket rested for a bit and then tried to get a dinner reservation which proved impossible. During the Edinburgh Festival and Military Tattoo, it's good to plan ahead if you want something other than pub food.

But you know, when in Scotland ... 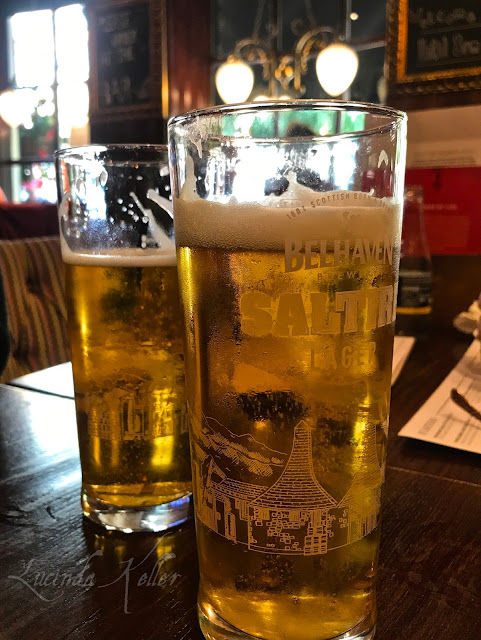 The large draft beers and large orders of Fish n' Chips were indeed LARGE. Here, below, is my dad with one of our orders. You know it's big when you laugh as the food arrives. Fortunately we only ordered 2 for the 3 of us because we still had some left over.

Oh, and it turns out I like Scottish Ale. Problem is that a big beer like that fills you up to where you  really aren't that hungry for food. I guess in some instances that could be a good thing? 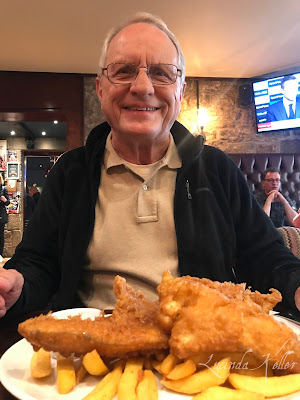 We ate at Fiddler's Arms which was a very conveniently located old traditional pub which we could see across the street out our apartment window. Fortunately, we got in before a huge crowd of people, got a seat and were out in plenty of time to get up to the castle.

Back up Victoria Street ... 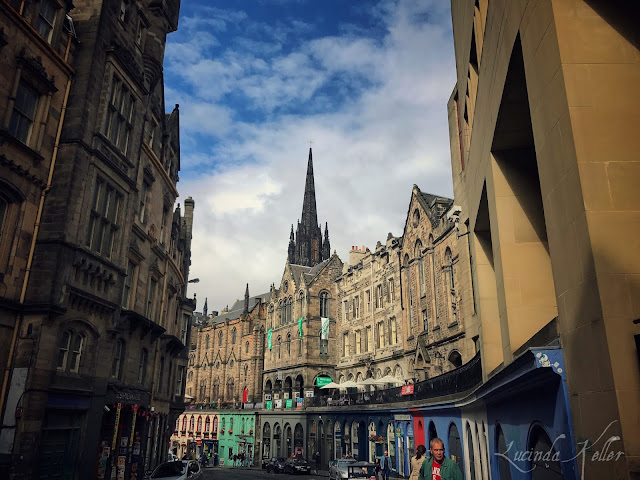 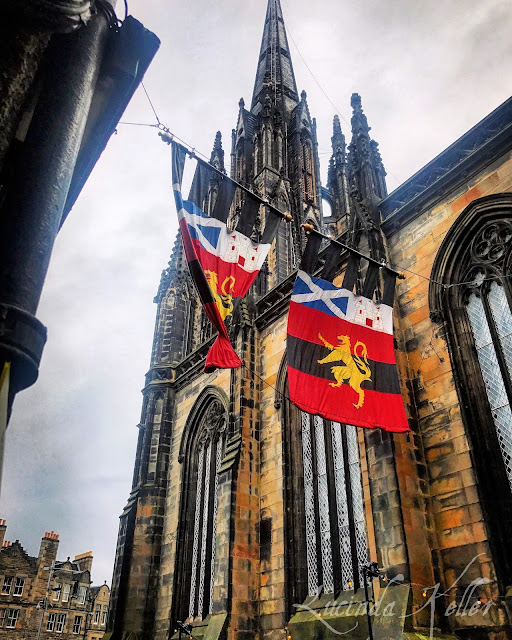 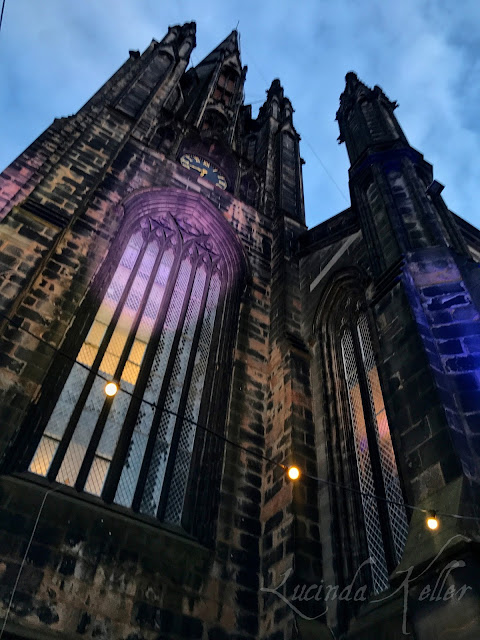 We headed up with a huge crowd toward Edinburgh Castle, tickets in hand, for the Military Tattoo. My Aunt and Uncle used to take theater groups to Edinburgh for the festival and told us we absolutely couldn't miss the Tattoo! 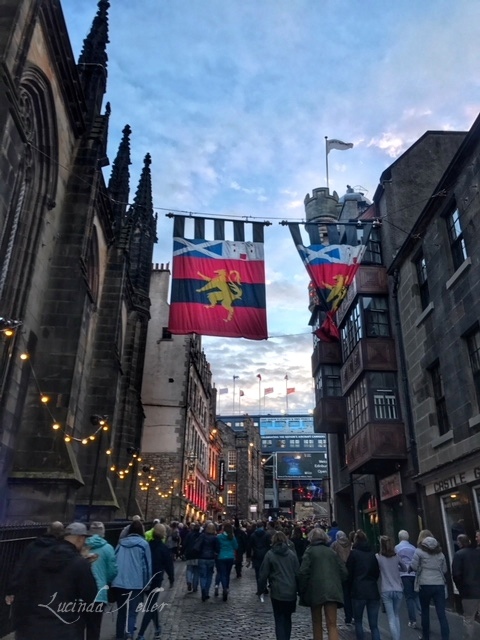 Lots of street performers everywhere, during the Edinburgh Festival, Fringe Festival and Film Festival. There was such energy and excitement in the air! 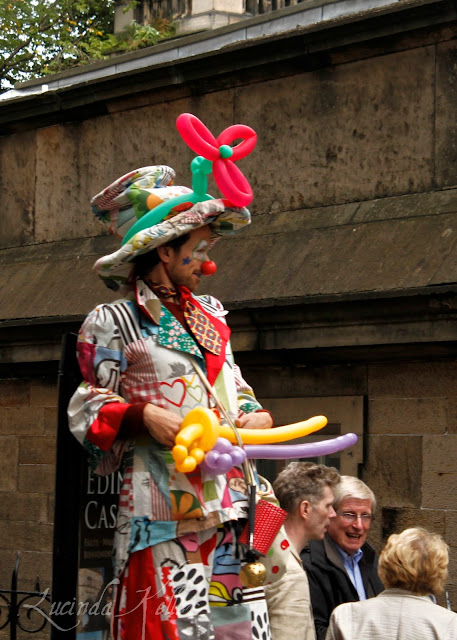 Almost at the castle, I looked back at the crowd. I loved these two guys' faces! 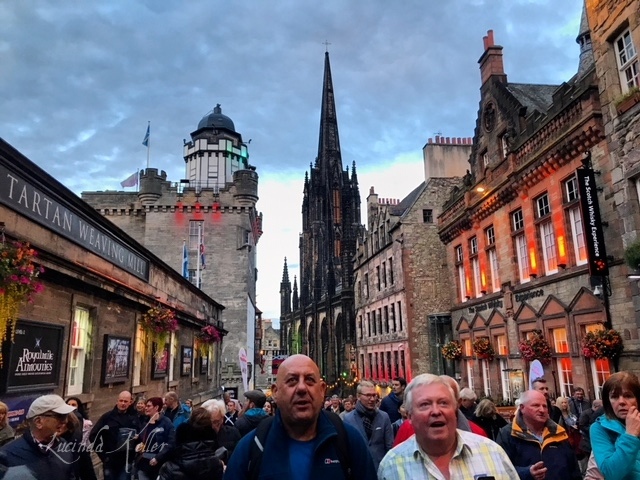 The Tattoo is up on the Castle Hill just out front of the entrance and Castle walls. They build big bleachers for the run of the show. Before heading into the bleachers I snapped this next shot. You can see a glimpse of the castle on the right. 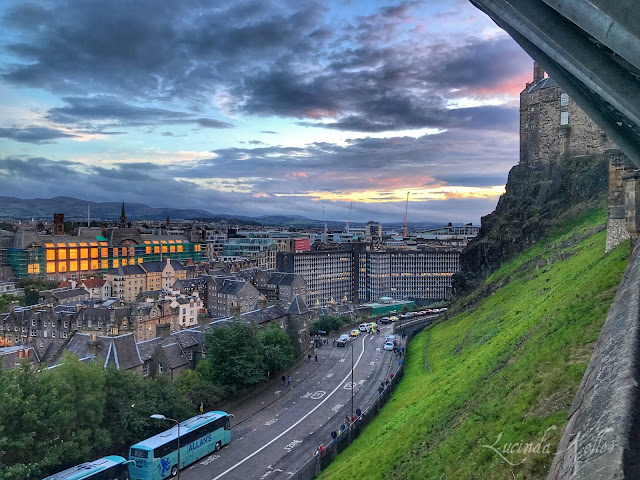 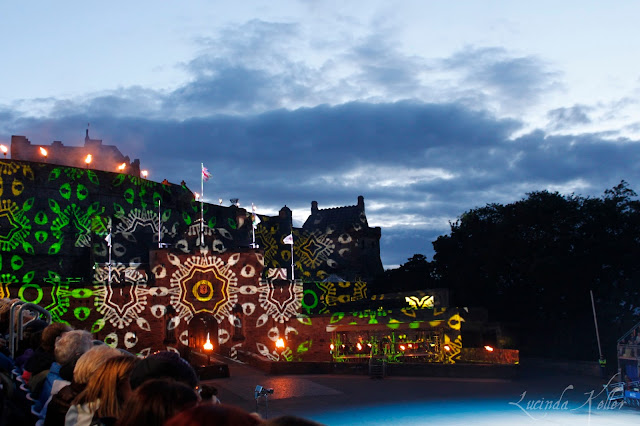 The 2017 Royal Edinburgh Military Tattoo
"Splash of the Tartan" 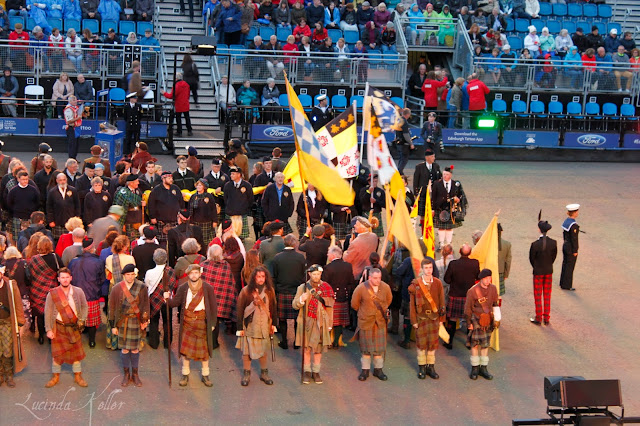 I couldn't believe how many performers there were! And so many pipers! Apparently, more than 250 of them! Pipers have always made my mom cry and I admit to getting weepy myself through much of the show! For some reason the whole experience was very emotional! Maybe it's in my Scottish blood.

I'm so glad we had gotten tickets (pretty far in advance, online) for our very first night in Scotland! (Fortunately, no flight delays!) 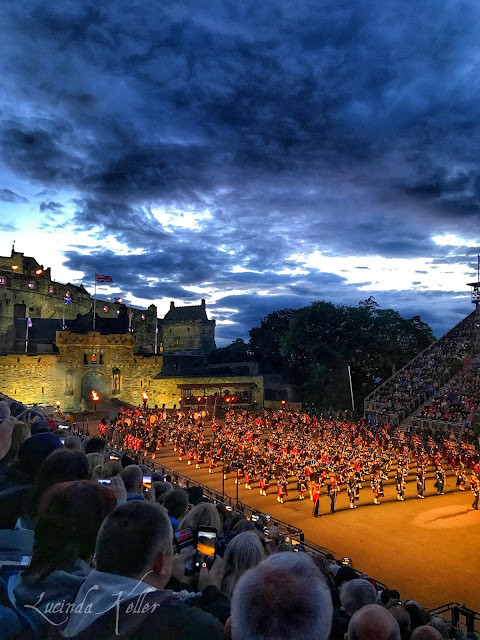 It was so beautiful how they projected various visual themes, that went with the narrative, onto Edinburgh Castle and its walls! And the designs were moving and morphing into different images! 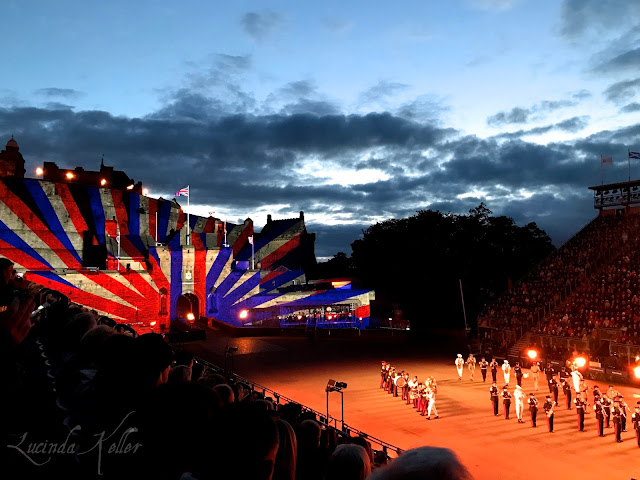 "2017 saw the Tattoo celebrate the theme ‘Splash of Tartan’
promoting the year of History, Heritage and Archaeology,
with each performance seeing at least two of the nation’s
ancient Clans take to the esplanade.

‘Splash of Tartan’ welcomed a cast of more than 1,200 performers from all points of the compass, including over 250 pipers and drummers, five United Kingdom military bands drawn from across the three Services, a first-time performance from Japan and plenty of other surprises along the way. The programme also paid rich tribute to the UK’s maritime heritage and the Royal Navy in this special year, with HMS Queen Elizabeth now on sea trials and HMS Prince of Wales in build.
This year’s performance reflected on Scotland’s links across the globe and showcased some of its finest musical traditions. As ever, the headline act - the Massed Pipes and Drums - created an unmatched atmosphere and sound, with more than 250 pipers and drummers playing in perfect pitch: the most iconic sight and sound of the Tattoo." 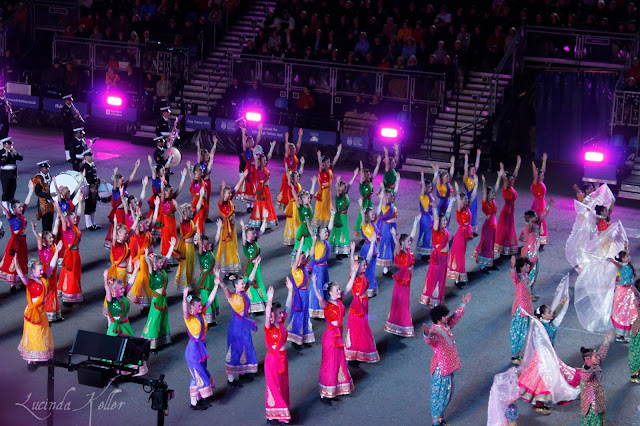 I think this next shot was about the Vikings coming to Scotland. 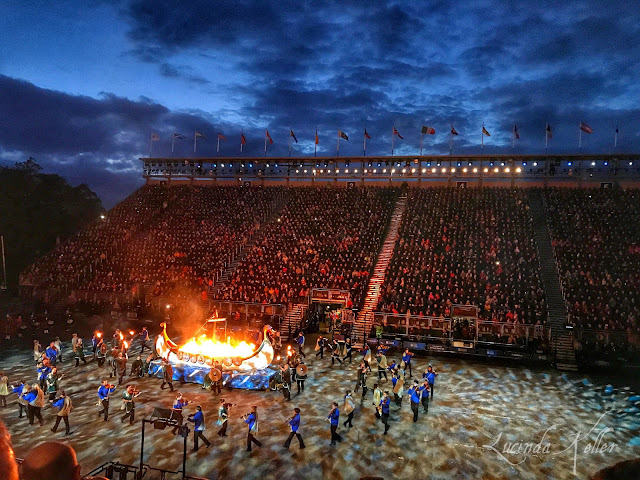 The shot below is of a reenactment of the rebellion of the '45 when the Jacobites rose up against the Hanoverian British monarchy, on the side of the House of Stewart in the 1700s. People in the crowd were generally cheering the ragtag Jacobites, not the British army. 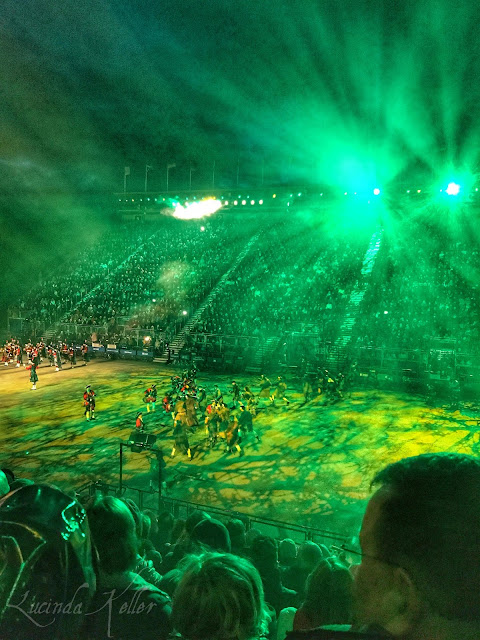 Loved the plaid on the castle! 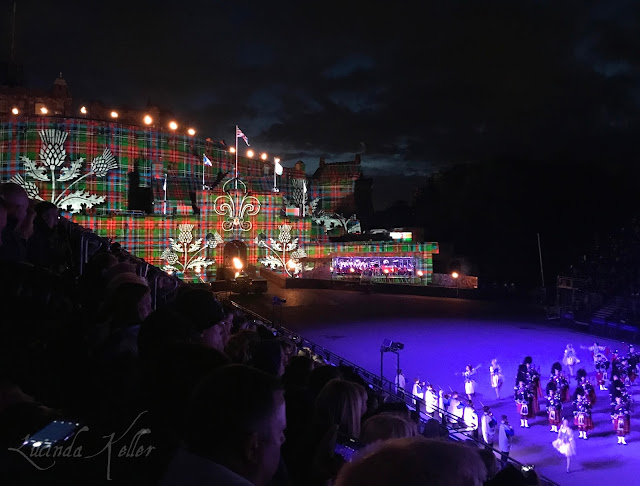 At one point they were telling of Bonnie Prince Charlie, escaping from Scotland after the uprising via the Isle of Skye with the help of Flora MacDonald. They Played the Skye Boat Song (now people know it as the theme song to Outlander, but with the words changed) and how that was the end of the Jacobites. My mom and I were both sitting there, tissues in hand and trying to hold it together. 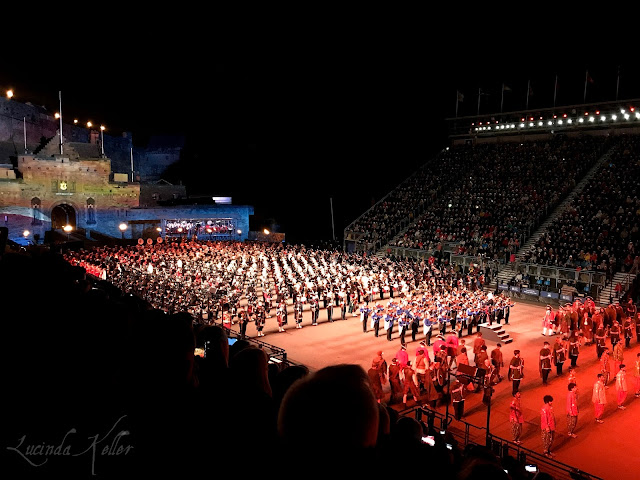 I took some quick little videos with my iPhone that I spliced together ...

At the end of the last clip, it abruptly ends because everyone crossed their arms and grabbed the hands next to them and sang out LOUD Auld Lang Syne! Funny, I'd never heard it fast like that! Always slow and melancholy on New Years Eve, but this was almost a cheer! Somehow, it still made me cry though, hearing it for the first time in Scotland!! Good ol' "Rabbie" Burns! 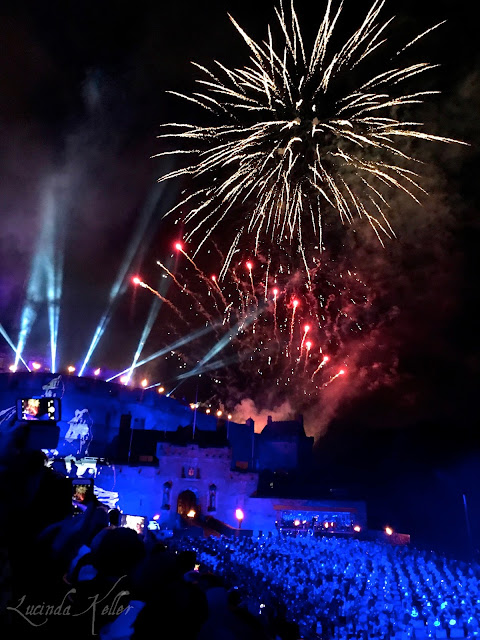 After the show, in front of the castle. After all the planning it felt like I'd somehow won a reward for my efforts! Oh, and by my clothes you can tell how warm it is in the second half of August! Fortunately, I'd gone online and found out that fall starts mid August so we were prepared for cooler nights! 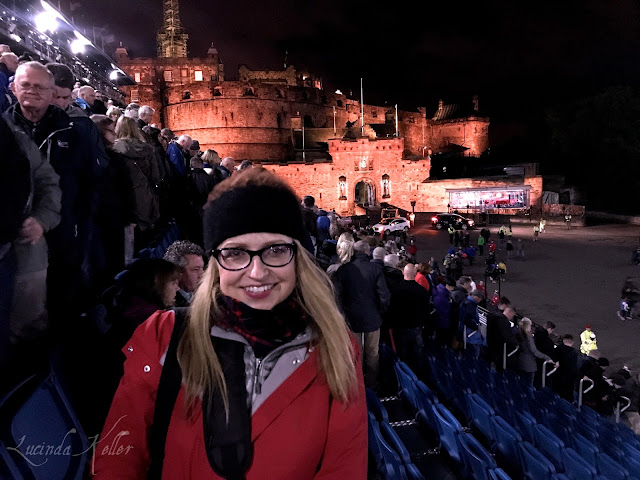 For those that may remember my Rome trip, I was wearing the same hat I lost in Rome and backtracked to find with the caretaker at the Church of San Carlo alle Quattro Fontane. Also, the same hat that I "lost" in New York at a Broadway show and had to retrieve later from the Stage Manager at Mary Poppins. I managed to hold on to it this trip ... but lost another hat! Oy vey!

To finish off our first night with a toast ... we went to the well known Bow Bar on Victoria Street on our way back to Grass Market. 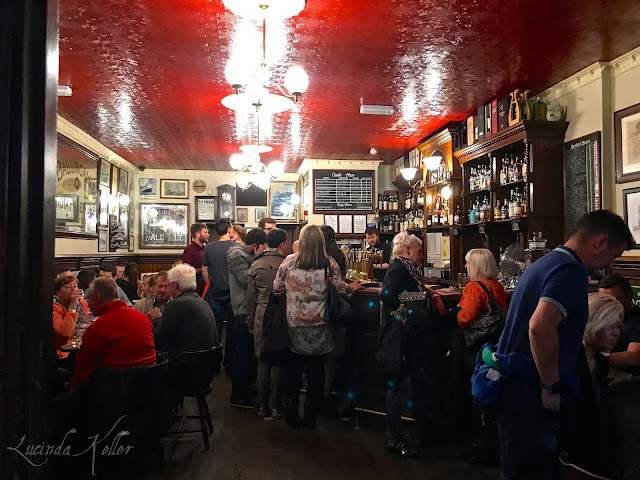 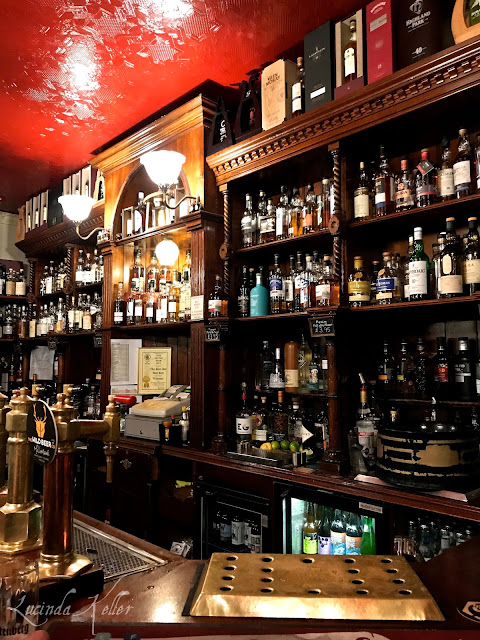 This charming pub has won all sorts of awards for their wee, one room, Whisky and beer bar with hundreds of Single Malts from all over Scotland to choose from!

But what to choose? I wanted to try something new on my first night. I told the bartender that I usually drink Laphroaig 10 year at home so I definitely like a peated Scotch.

He recommended another Isla Scotch, called Kilchoman ... They are in the middle of the photo to the left of the Laphroaig. 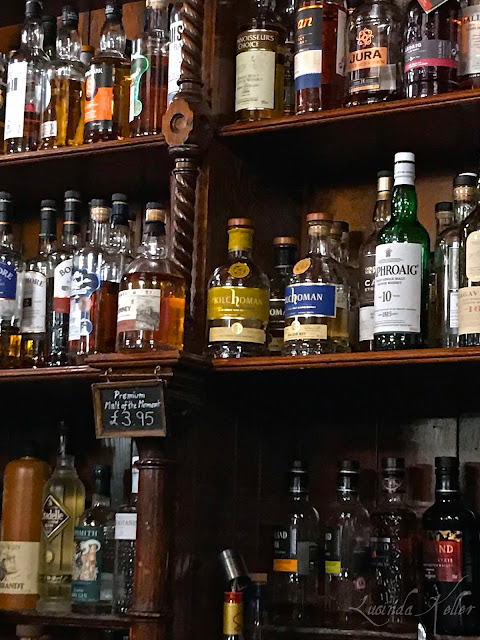 There it is! First Scotch of the trip in a cute little Glencairn glass! 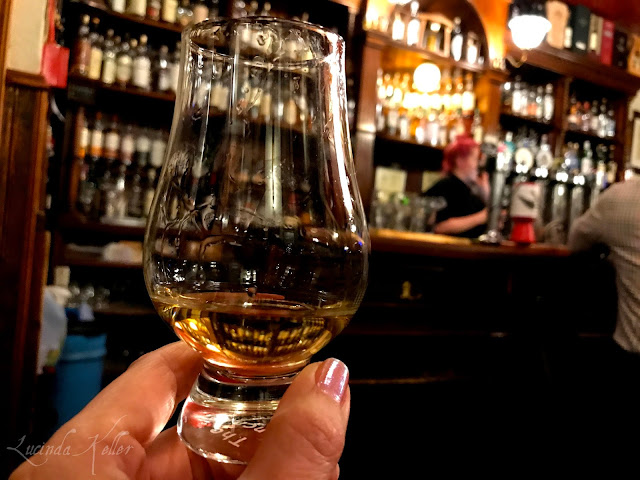 It was DELICIOUS! It's always worth asking a good bar tender! Alas, back in the states, that Scotch is a bit north of my price point but you know, it's fun to try knew things and I made it a bit of my mission!

Anyway, that was it for our first day of arrival and it took 2 posts! I might be blogging Scotland until Christmas! 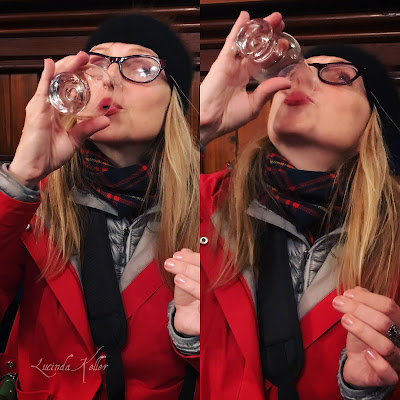 Wow, Lucinda! Thank you for making my day! I love your Scotland!

Keep the posts coming. I'll never be bored of reading about Scotland.