The Journey to Inverness ~ Kelpies of Falkirk, Lochs and a Swan

Of all the small nations of this earth,
perhaps only the ancient Greeks surpass the Scots in their
contribution to mankind.
~Winston Churchill 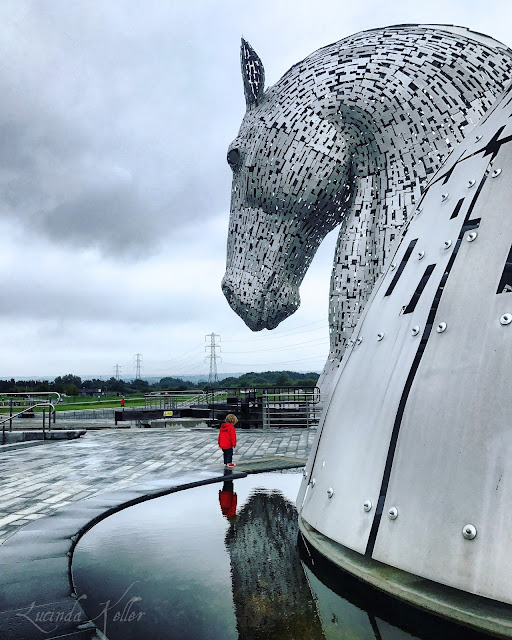 On our 5th day we headed North from Edinburgh. Doune Castle (my last post) was not actually our first stop but a place called Rotho.

I was bound and determined to find a can of SMIDGE to ward off the midges which are famous for eating people alive in the Scottish summers. Okay, that was a little dramatic but they are like mosquitos but smaller and they can swarm you and make life a bit miserable.

I tried to order some online from the states but couldn't swing it. The best place to find Smidge is at sporting goods places and select pharmacies. 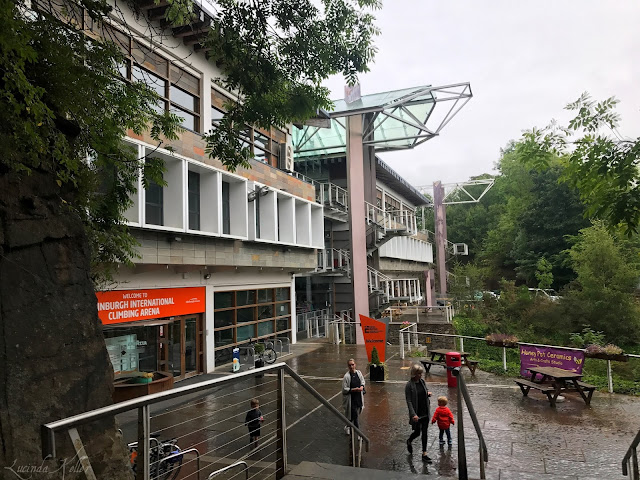 Looking on the internet I found a climbing arena that carried it. I had no idea where we were really headed but it turned out to be the largest indoor climbing facility in Europe! It's called the Edinburgh International Climbing Arena. 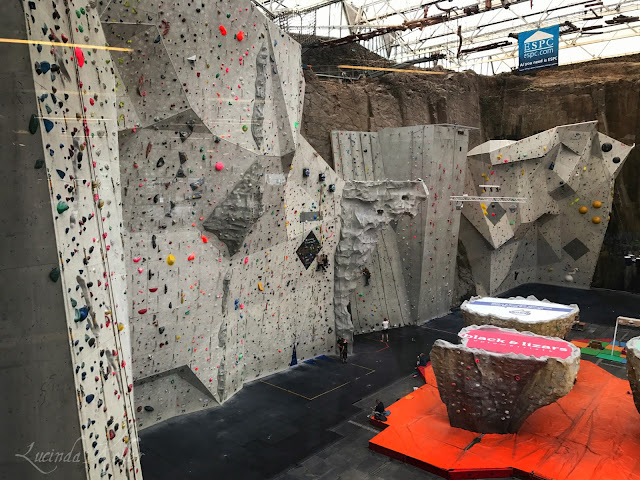 It's enormous!!! The climbing area was incredible. On top of that, there were shops, a gym, a pool, a cafe, offices, play areas for kids and a huge sporting goods store with climbing equipment ... and Smidge!

Smidge is non toxic and doesn't smell like a freshman science class. They also have a midge tracker on their website for those planning on venturing out on a Scottish trail in the warmer months.

I also got some homemade soap at a highland games with an herb that is supposed to protect against midges. They also don't like wind, so if you are going out hiking, a good breeze is also a help. Other than a few bites ,when we weren't wearing the stuff, we were not eaten alive and all was well.

Here are some quick video clips from my iPhone leaving Edinburgh and on our drive up north!
It'll preview this post and show you a video clip of this arena.

Can you believe this place?

A little Scottish Music for you ... 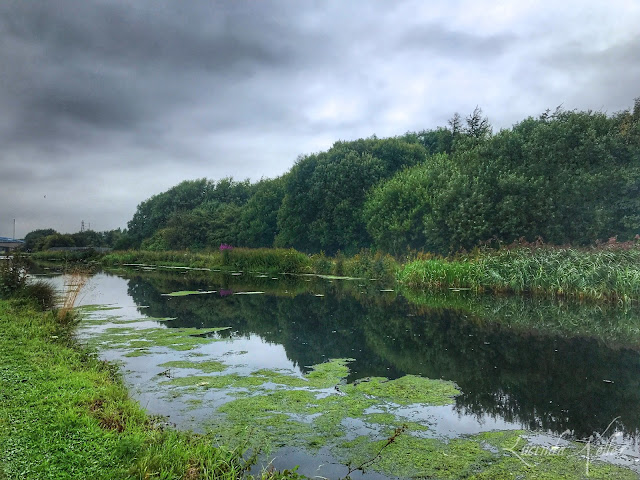 Helix Park is beautiful. There are 26 kilometers of paths (some of which sit above ground so you don't sink if it is muddy) and there are all types of native flora and fauna. You can also rent bikes which would be a blast in May or June! Helix North is the greener part of the park.

There is a canal that runs through it with a lock which you see below. 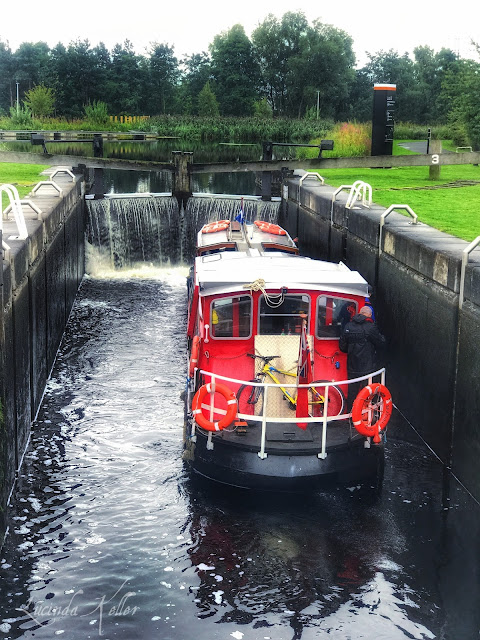 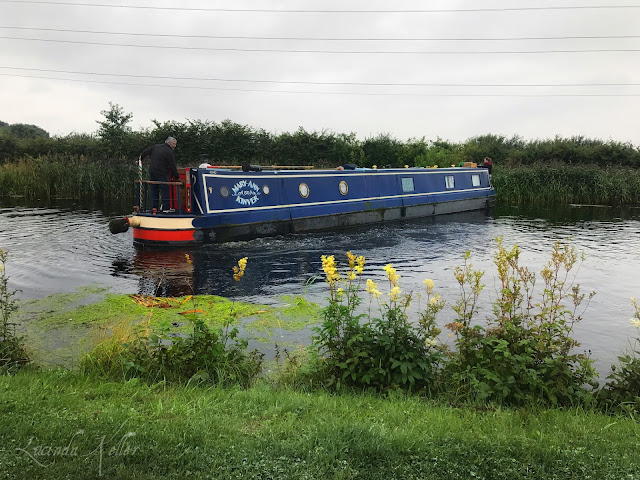 The main reason we were there was to see the Kelpies of Falkirk!! 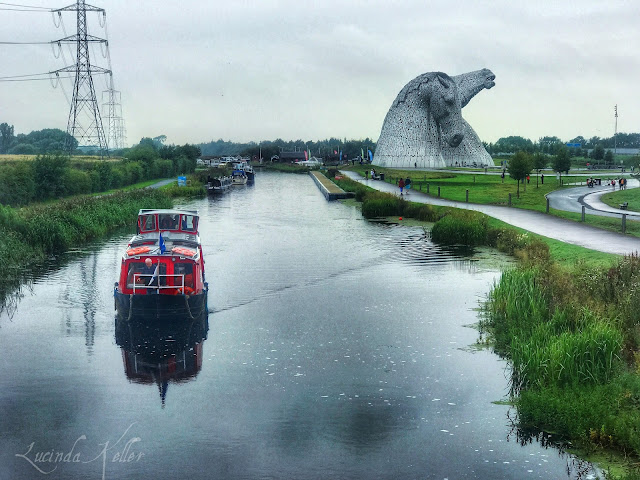 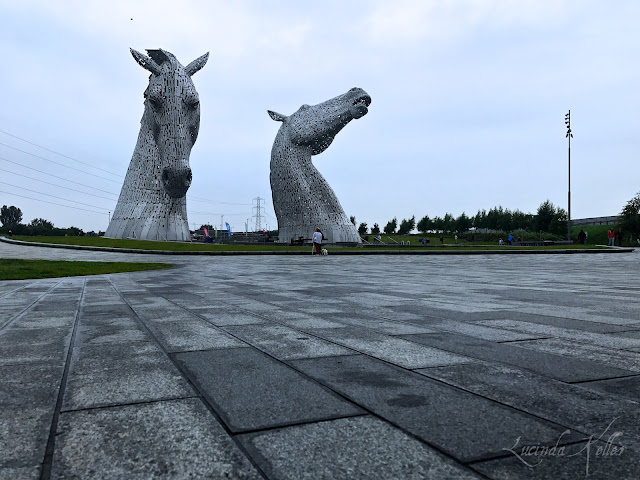 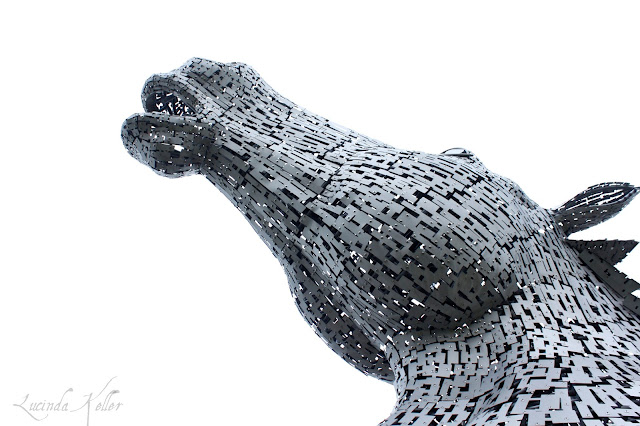 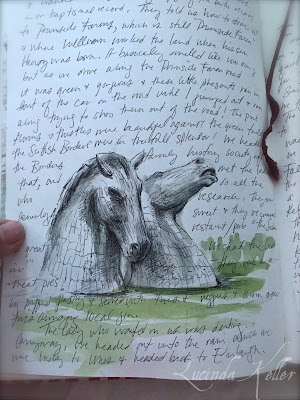 I was on a mission to see the Kelpies! 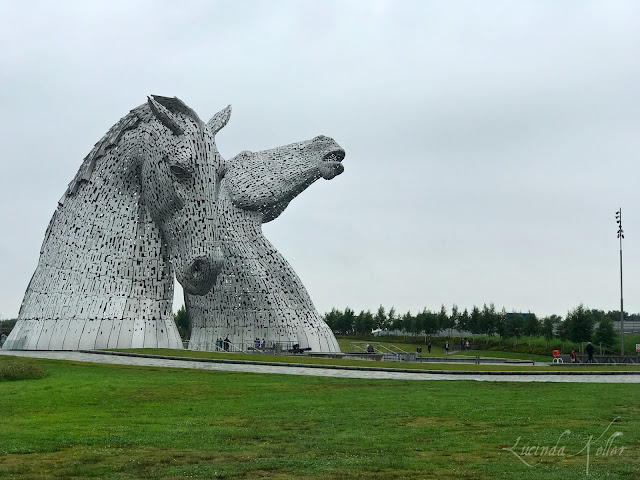 The Kelpies are the largest equine statues in the world and each one weighs 300 tons! These beautiful 30 meter high sculptures were created by Andy Scott. Kelpies are shape shifters who often take the form of horses. These pay homage to the work horses who helped build modern Scotland. 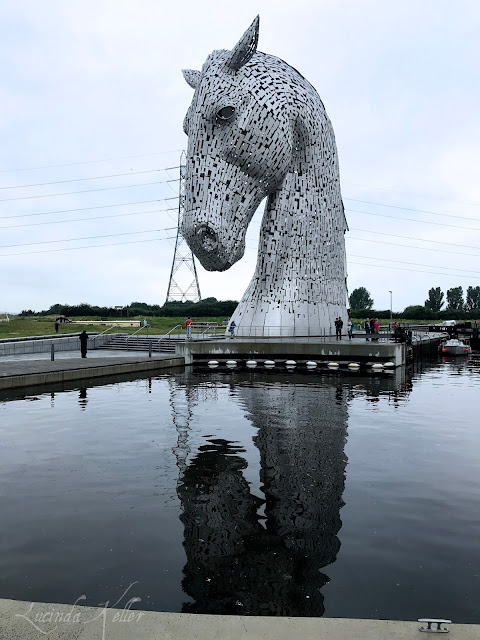 "During the conceptual stages, I visualised the Kelpies as monuments to the horse and a paean to the lost industries of the Falkirk area and of Scotland."
"The original concept of mythical water horses was a valid starting point for the artistic development of the structures, but from the original sketches of 2006 I deliberately styled the sculptures as heavy horses. In early proposal documents I referred to Clydesdales, Shires and Percherons, of the fabled equus magnus of the northern countries.
"I wrote of working horses. Of their role in the progress of modern society, as the powerhouses of the early industrial revolution, the tractors of early agriculture and of course, the first source of locomotion for barges on the Forth & Clyde canal, which The Kelpies now inhabit.
"Falkirk was my father's home town and that inherited association to the town has been one of my driving inspirations. A sense of deep personal legacy has informed my thinking from the outset, with old family connections anchoring me to the project." - Andy Scott 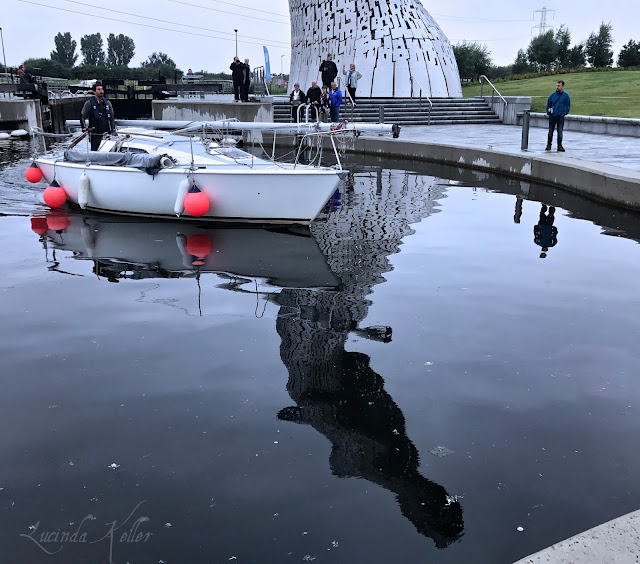 There is a visitors center, a cafe, a coffee kiosk where you can grab a cappuccino and of course a small gift shop. 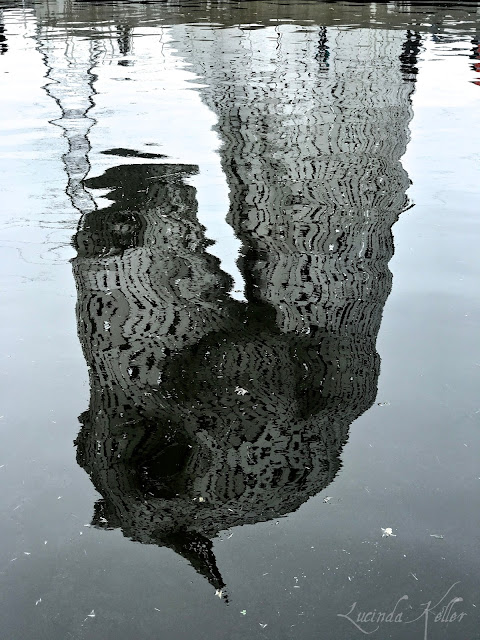 The Kelpies were definitely worth the trip to Falkirk. With all the things we did that day, my mom said our visit to the Kelpies was her favorite. They really are magnificent! Next time I'd like to go at night when they are all lit up! You can also take a Kelpies tour where you can go inside and they explain how they engineered these incredible sculptures. 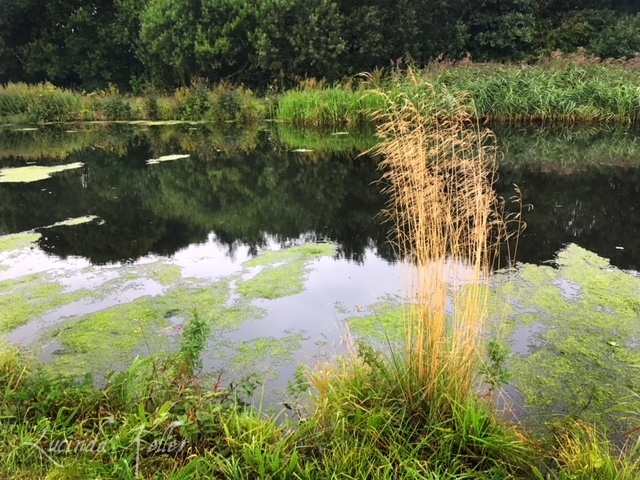 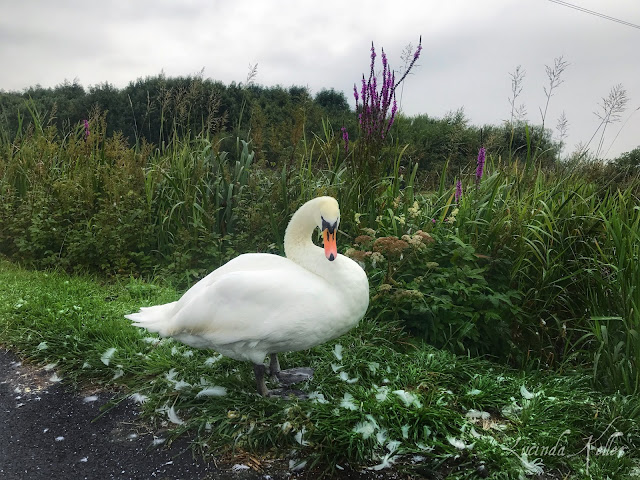 This sweet swan was on his own. I was so high on the Kelpies I didn't realize he had a problem. I guess I thought he was molting. Later as I looked at the photos one of his wings looked like it was hanging a bit low. I guess if I'd known I would have been upset not knowing who to call for help! 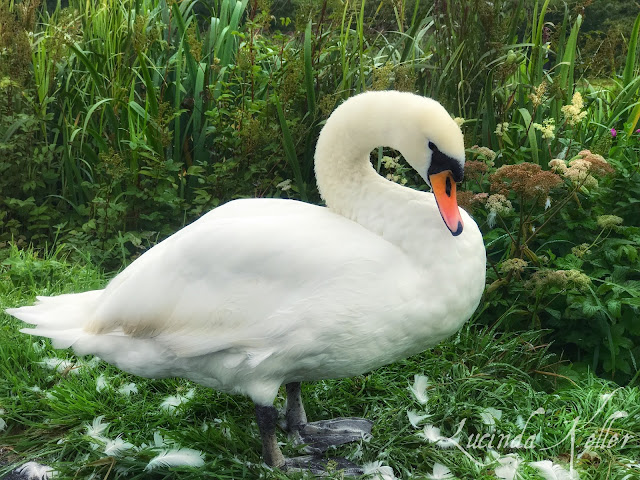 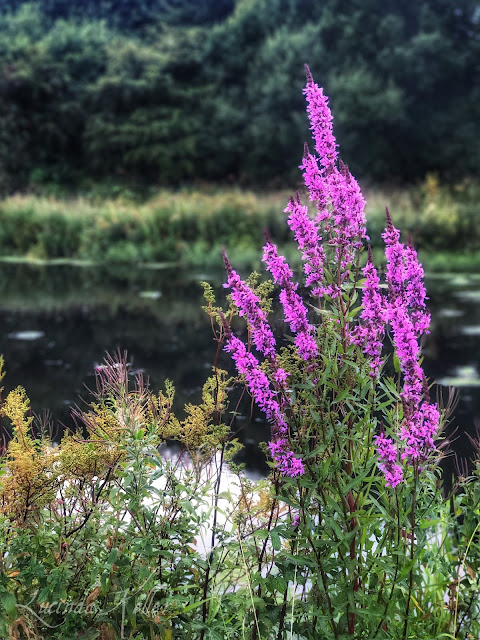 Hope someone helped this sweet laddie! 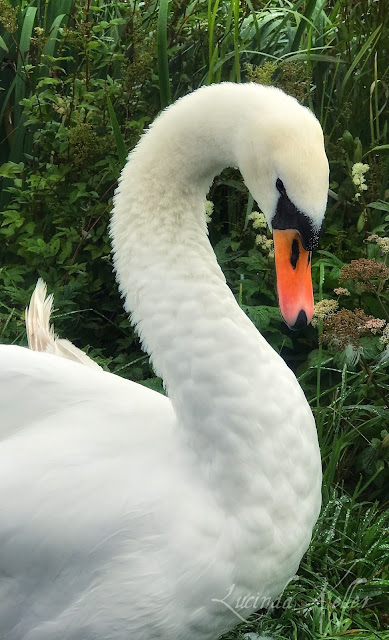 Falkirk Wheel
Opened in 2002 by Queen Elizabeth
The worlds first and only rotation boat lift. 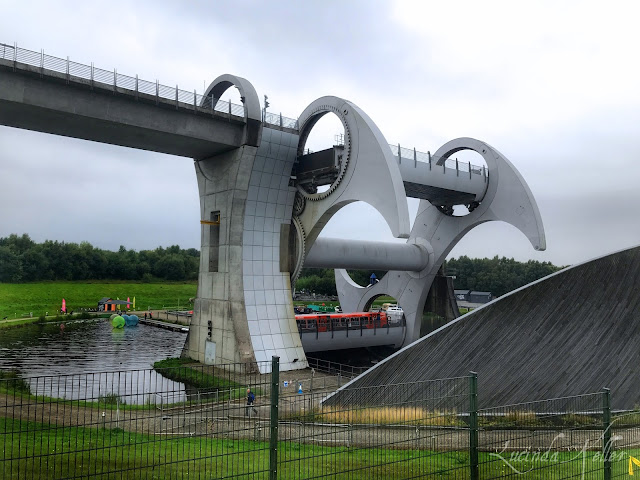 In the 1930s there were 11 "staircases" of locks that linked The Forth & Clyde and Union Canals. This took almost a day to get through so they were dismantled in 1933. In 1994 a new concept was presented. A giant wheel as a boat lift! Work started in 1998 for the 84.5 million pound project to link the canals.

"The final design is claimed to have been inspired by a Celtic double headed spear, a vast turning propeller of a Clydebank built ship, the ribcage of a whale and the spine of a fish." 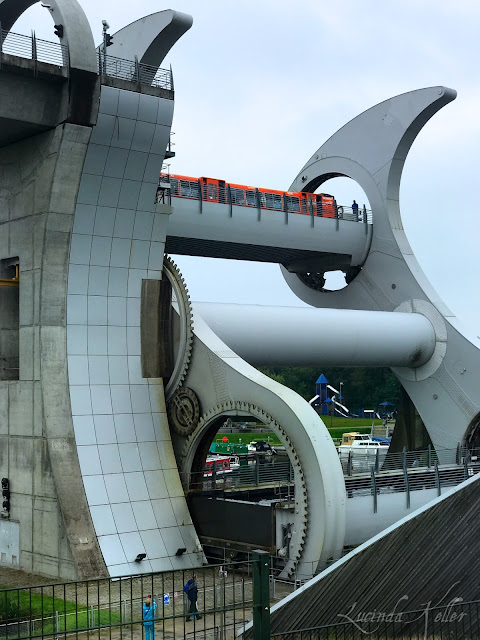 My dad, being an engineer, loved seeing how this thing worked! It's true that this place is pretty incredible but in truth I was ready for lunch.

Fortunately, it has a great visitors center with a cafe. I must admit I was skeptical. Art museums in the States generally have good food and bathrooms but other tourist attractions can be a bit on the crappy side. Scotland? Nice CLEAN bathrooms everywhere we went and great food at the tourist sites! Over and over I was impressed. Remember, we were on a road trip and I was never grossed out with the facilities. Anyway, the food here was great.

Back to the wheel. As my dad pointed out, the engineering is pretty incredible. He read that to run a full cycle of the wheel it only takes the energy you would use to brew a pot of coffee.

Here's how it works 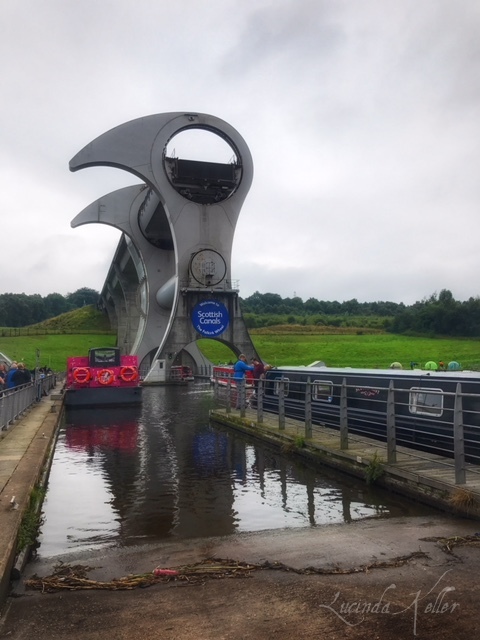 There are many different canal trips you can take on various routes in Scotland. How fun would that be?!

Here is an arial film by the "Hovering Scotsman" of the Kelpies and the the Wheel. Don't get confused by the mini version of the Kelpies next to the wheel. They are probably less than the height of an L.A. Laker. 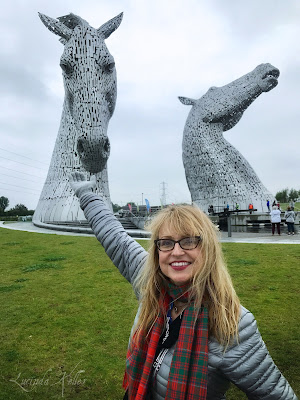 Fun stops! After Falkirk, we stopped at Doune Castle. Then we headed up the hill to Stirling Castle and had dinner in the lovely town of Pitlochery. That will be my next post.

I'm in love with the Kelpies!

I have not heard of, but love the Kelpies. Your journaling of them is a treasure. So much about the world I don't know. Your dad must have loved that trip looking at all the engineering feats.

The Kellie's are beautiful. Hope the swan was ok but they are generally well looked after since all the swans in public places in the UK belong to the Queen.

I meant Kelpies, of course. Autocorrect gets on my nerves sometimes.

nice photos Lucinda ! Hope one day I could visit Scotland !