Gardens and flowers
have a way of bringing people together,
drawing them from their homes.
~Clare Ansberry 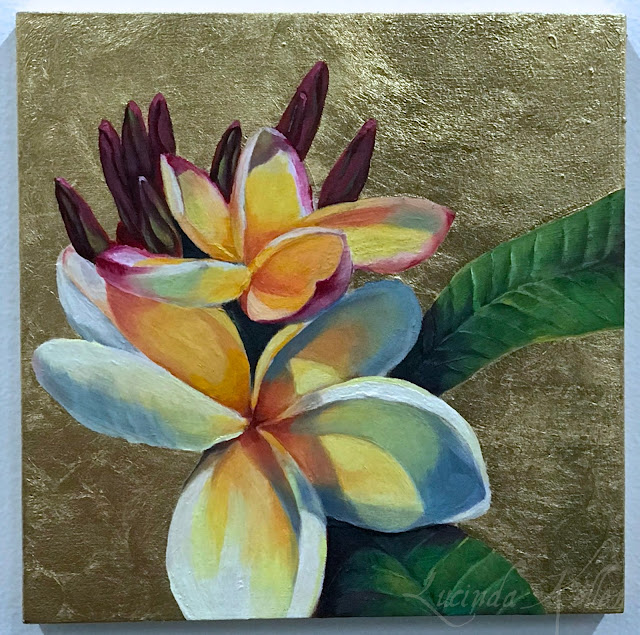 The painting of plumeria was done for my December 2018 solo show, Through Time and Place: 5 Decades.


This first shot of Waimea Bay was looking from the side of the Kamehameha Highway. As you can see the notorious waves of Waimea aren't always pumping. Sometimes it's the perfect place for a swim! In fact, as mentioned in my Sea Turtle post, this is where I got to swim with one! 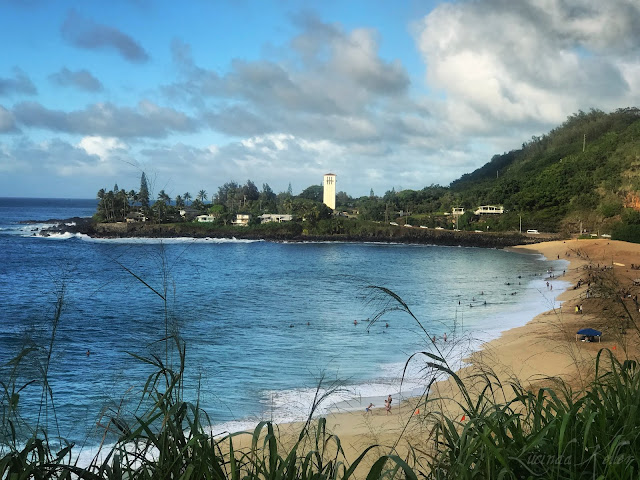 The next two photos are from the Haiau up above Waimea Bay and Valley and looking toward Kaena Point. 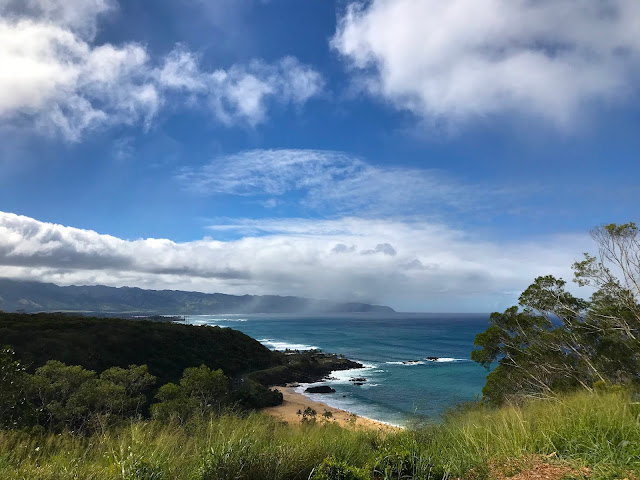 Below, the Waimea River has run into the estuary. 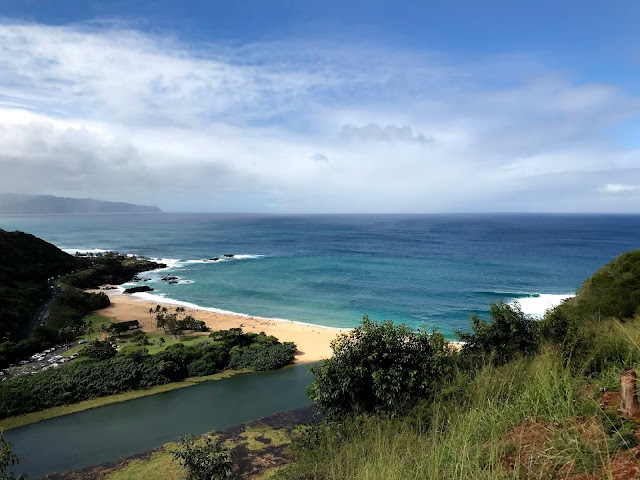 There is a road you turn on from the Kamehameha Hwy that leads you up the river. You'll be greeted by the Waimea Valley Geese, no doubt! 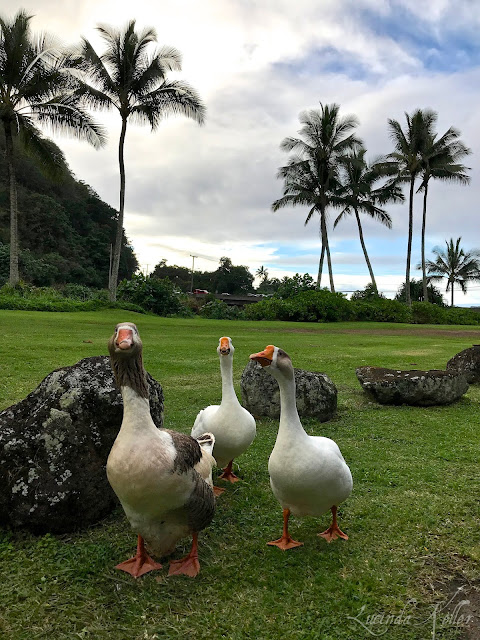 So gorgeous and lush! 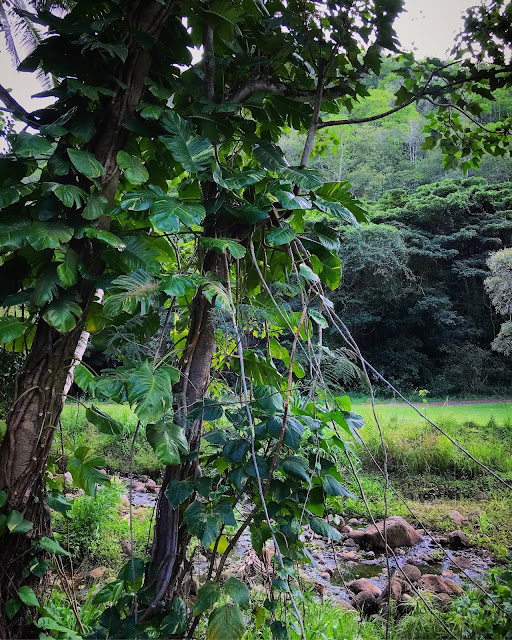 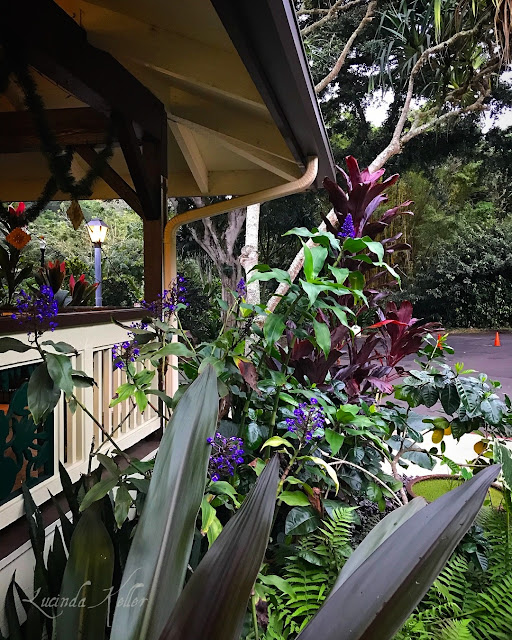 Waimea Valley Botanical Garden
"Waimea Valley is a botanical garden, historic and cultural site with a 45 foot waterfall located on the North Shore of O’ahu, Hawai’i.  It is a 1,875 acre ahupua‘a, a division of land stretching from the mountains to the sea.  Waimea Valley has gone through many changes throughout its history and today many of the historic and cultural sites are surrounding by a world class botanical garden stretching over 300 acres ... Waimea Valley is the home of more than 5,000 documented kinds of tropical and subtropical plants including native and endangered Hawaiian plants." 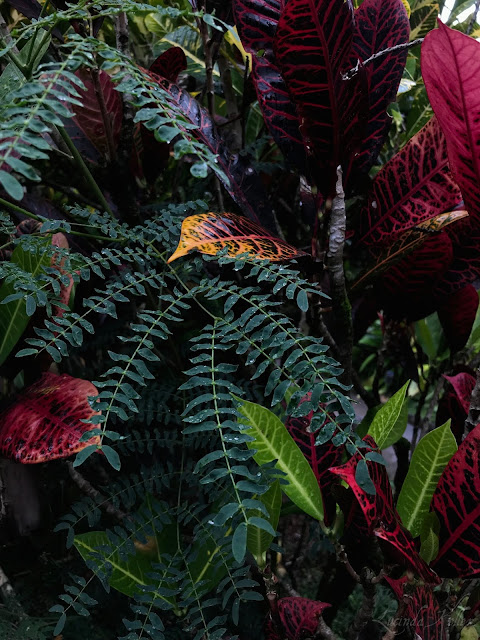 I'm a little embarrassed to admit that both times I was there I went to the farmers' market and never made it all the way in to the Botanical Garden, nor the hike to famous waterfall. You'll see, however, that just being in the Peacock Pavilion area, it is filled with birds and incredible flora. 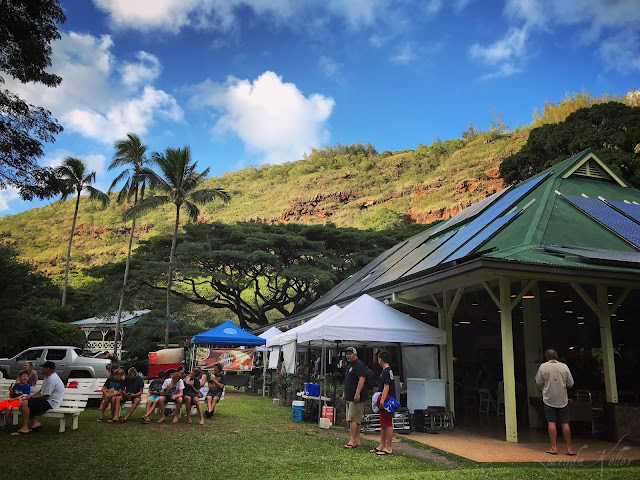 During the Thursday night Farmers' Market there was a wonderful man playing Hawaiian music, food, produce and artisans selling handmade jewelry, clothes and all sort of other goodies.

You can tell that Shannon and I were enjoying ourselves! 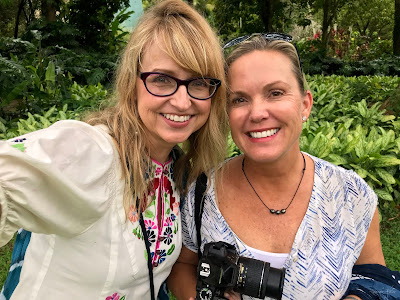 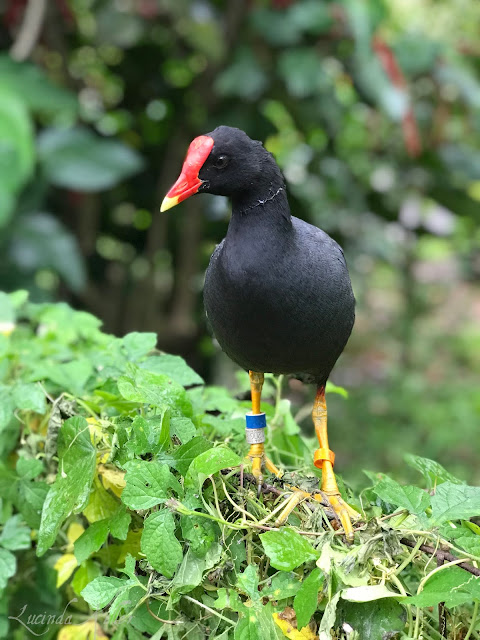 This little guy was so friendly and just sat there while Shannon and I took a bunch of photos. He changed positions, turned around and walked up and down the vine covered fence. I had no idea this species is so endangered!

"The Hawaiian Common Gallinule was listed as Endangered under the U.S. Endangered Species Act (ESA) in 1967; it's also listed as endangered at the state level. The filling, dredging, and draining of wetlands in Hawai'i has greatly reduced the amount of habitat available for the gallinule, limiting their distribution and abundance.
Introduced predators such as cats, mongooses, bullfrogs, and turtles are another problem for the ground-feeding birds. And climate change, particularly rising sea level, threatens the  species' low-lying coastal habitat." - American Bird Conservancy

Individually, we are one drop.
Together, we are an ocean.
~Ryunosuke Satoro
Peace lilies! These are great for your home air quality! 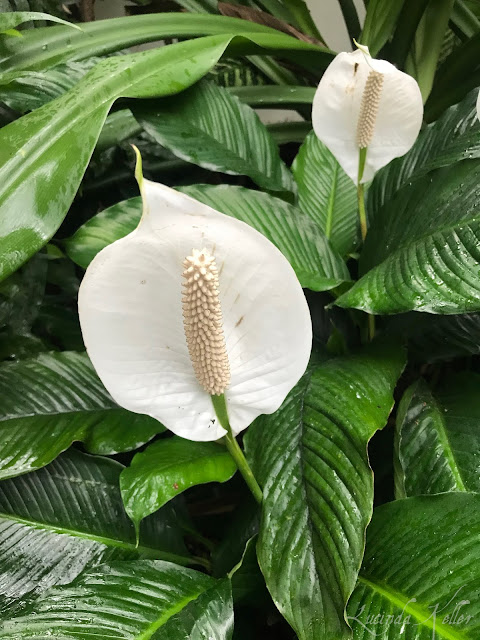 Spot the bee in this next one? I don't think Trumpet flowers are endemic to Hawaii but they sure are groovy. 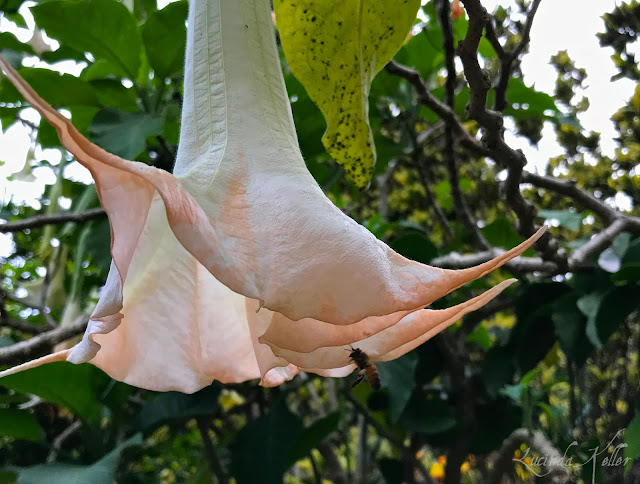 More on the Botanicals in the Valley and gardens ... 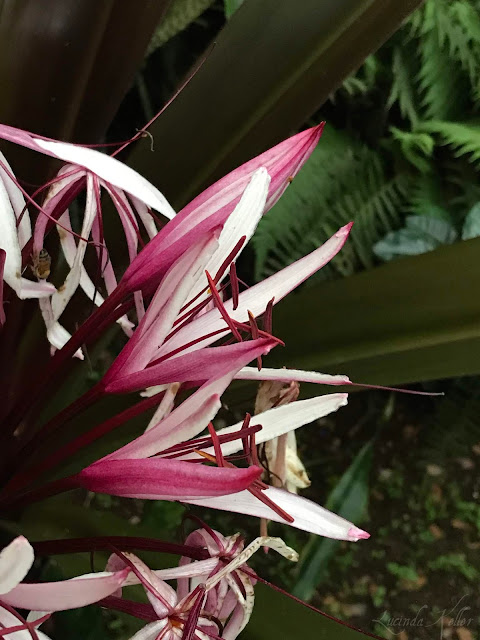 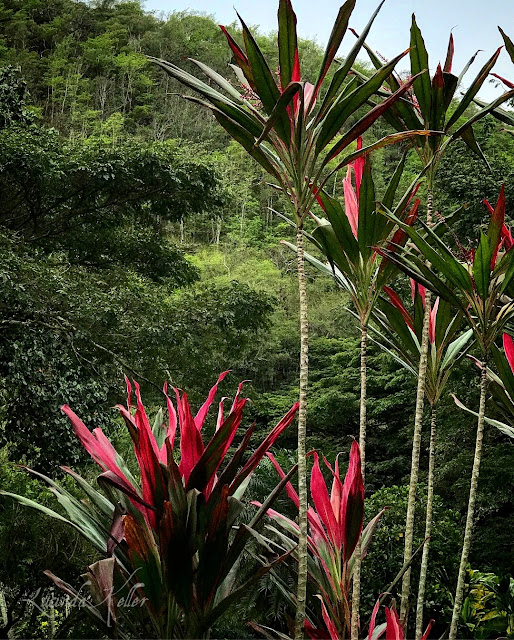 You can see how beautiful it is! Waimea Valley is also an incredibly important religious and cultural area for Hawaii. This video shows shrines, a temple site, deities, a cooking house, old original walls, and other places of historic importance for the Hawaiians. 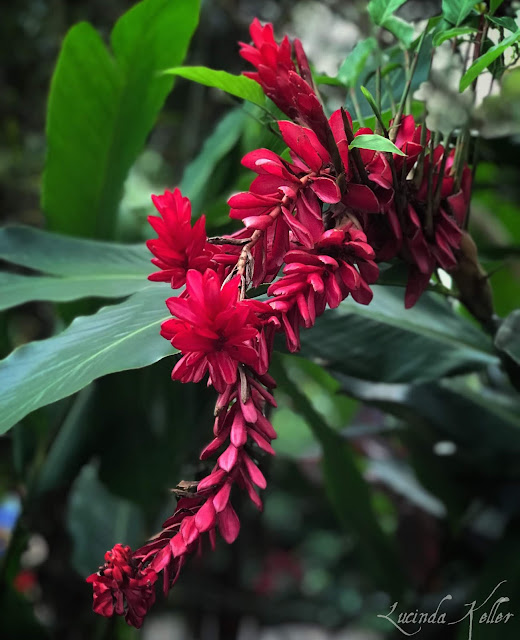 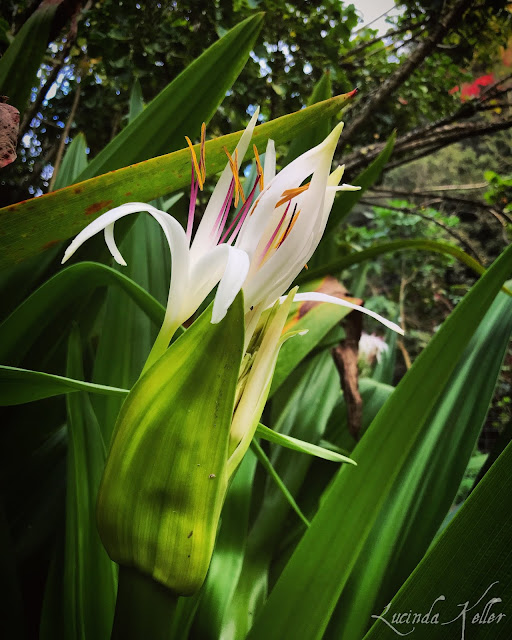 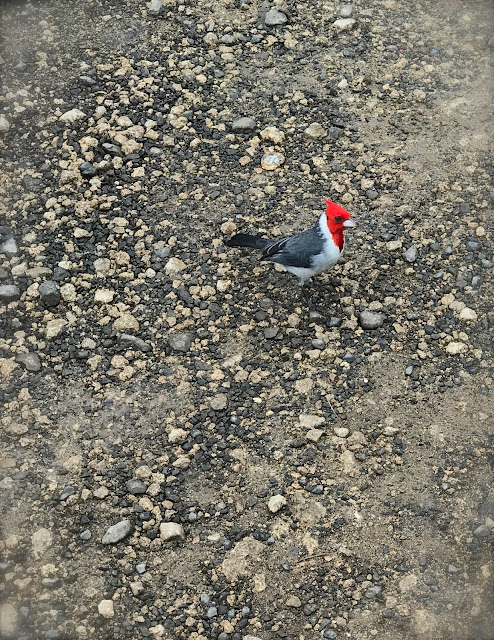 OK, so this next little guy was kind of hilarious. Truth is, at first it looked like a chicken running around with his head cut off. Actually, I thought maybe he was hit by a car in the parking lot and was still running around! He was a cool little feller who hid his face in those black feathers. I looked online and it looks quite like a silver laced Polish chicken.

I love the black and white scalloped feathers on his back and wings. Reminds me of a certain vintage Dior gown from the 1950s, but I digress ... 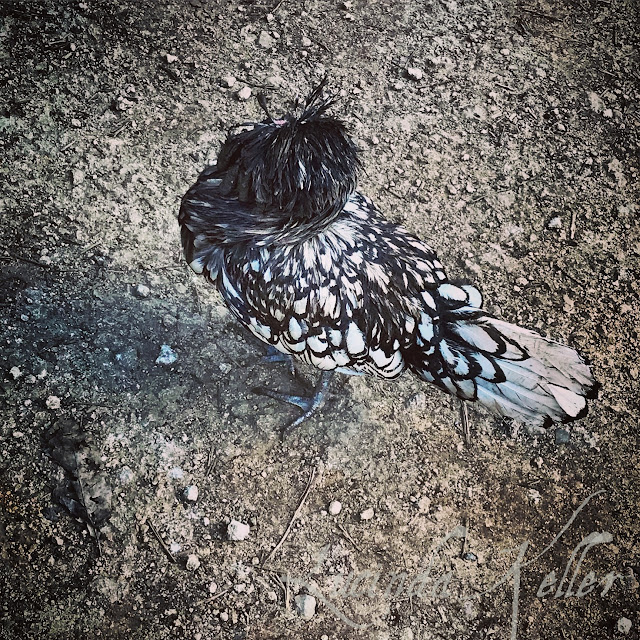 This red hibiscus was spectacular! 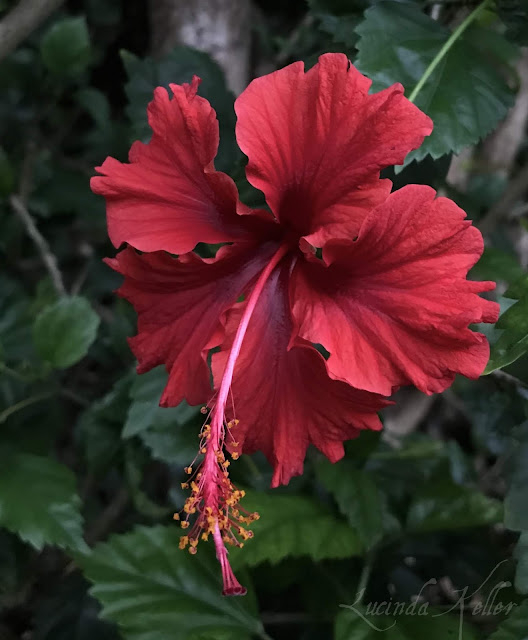 If we could see the miracle of a single flower clearly
our whole life would change.
~Buddha 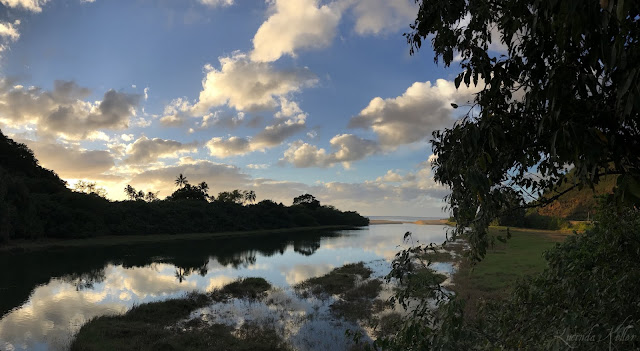 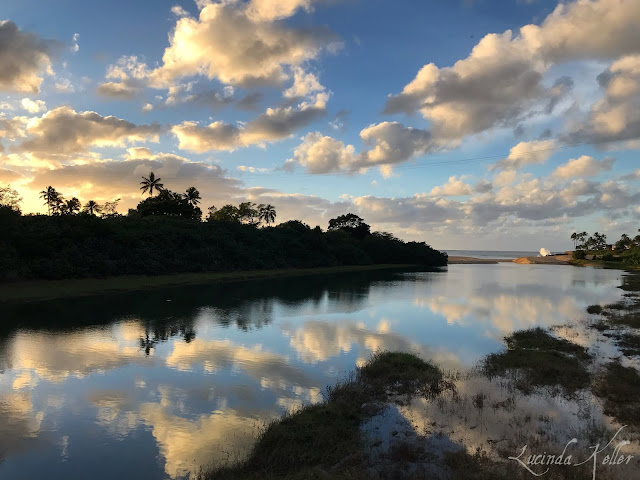 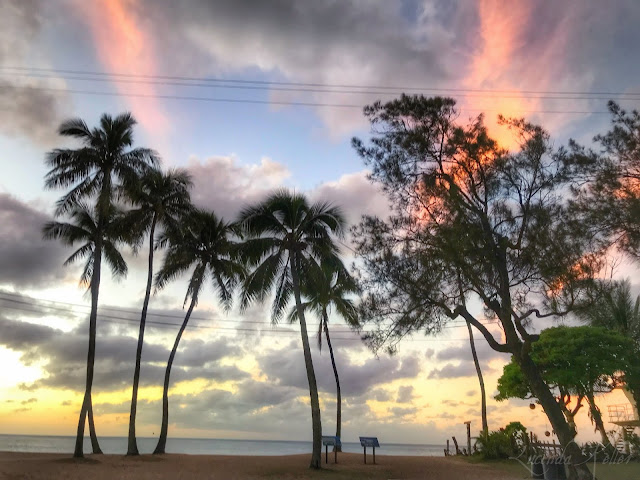 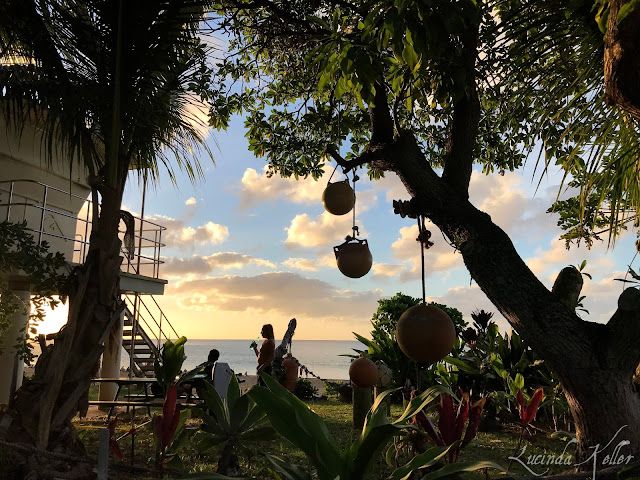 I love to get a sketch session in whenever I can. It slows down the moment and helps me to be present, even when it's just a very loose and quick scribble! 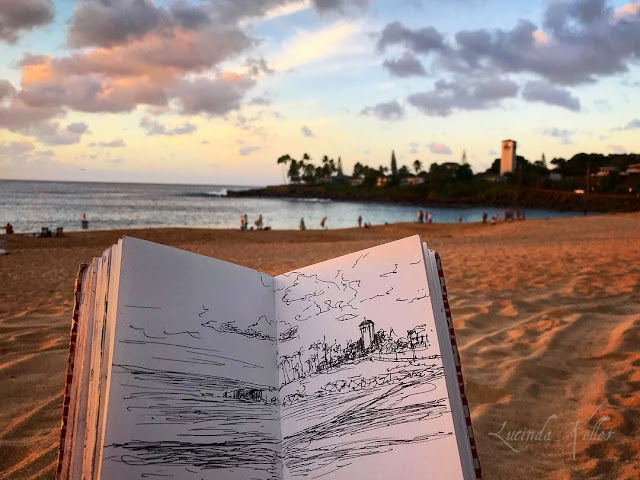 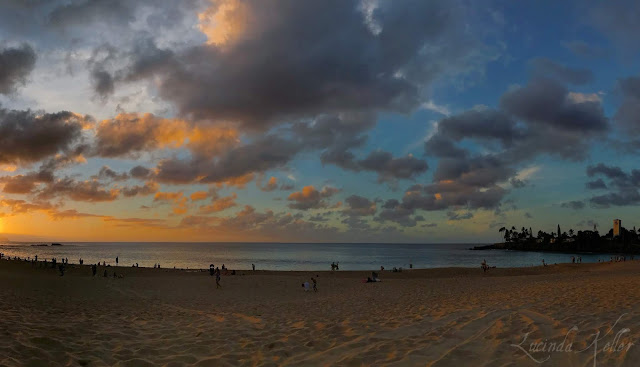 There is so much more to explore in Waimea Valley. I hope to go back one day and take in more of the culture and see additional rare and endangered species that they are working so hard to preserve.

Here's a fascinating documentary by the American Bird Conservancy narrated by Richard Chamberlain. It explains how birds and other flora and fauna first came to the Hawaiian Islands and how they adapted and evolved. But, it also explains how "Thirty-three of Hawai‘i's remaining 44 endemic birds are listed under the Endangered Species Act; 11 of those have not been seen for decades and are likely extinct."


This a pretty good overview video of visiting Waimea Valley but it's by Hawaiian Airlines so the touristy nature of the voiceover leaves something to be desired. If you are enjoying the views and want to see more of what's in the Valley then I think it is worth watching. ;-)

Hope you enjoyed the visit!

Lovely, luscious post, Lucinda. Makes me so sad about the endangered species.

There is so much beauty in this world. I hope we all do our best to preserve it. Your photos are lovely, as always.

hi Lucinda!
great post and pictures as usual.. your drawning and paintings reveal your talent!ew :)

That quick scribble is perfect.

Thanks for the lovely comments! And yes, we need to do everything we can to preserve our beautiful planet!