Painting Alaska and the West for my Solo Show

As you develop your awareness in nature,
you begin to see how we influence all life
and how all life influences us.
A key and critical feature for us to know.
~Tony Ten Fingers/Wanbli Nata'u
Oglala Lakota

There is something incredibly evocative about images of the west. Perhaps I feel that way because I grew up in California, and for a brief time in Alaska, with childhood road trips throughout the Southwestern, United States. For a solo show, where I was painting places that stuck with me and stayed in my memory in a deep and lasting way, I had much to choose from when it came to my early years.

I had been around Arizona, Utah, Nevada and did an acting job many years ago in Albuquerque but had never made it to parts of the Southwest that one of my favorite painters called home. In December, 2015 I finally made my "O'Keeffe" pilgrimage to New Mexico. I fell in love with the blue sky, red earth and adobe architecture. I could have painted all 32 paintings of Santa Fe and Taos!

With so much incredible beauty it wasn't the easiest decision to narrow down but for my solo show I chose to paint part of the Taos Pueblo. 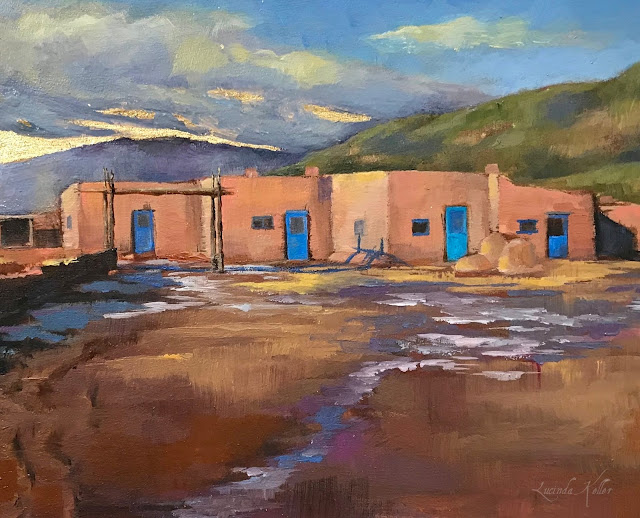 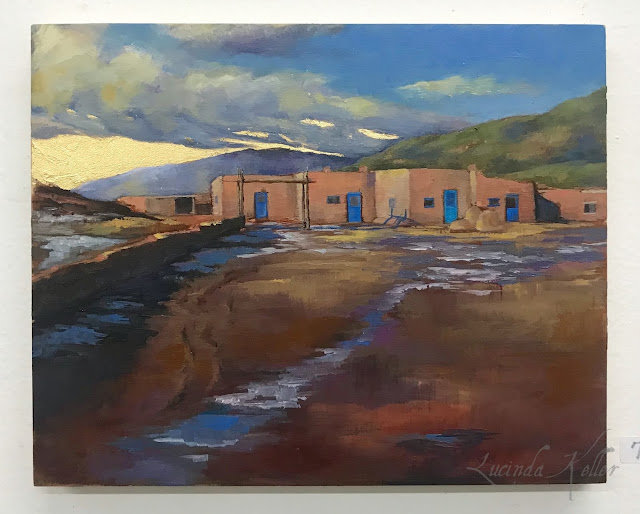 This next painting symbolizes the early 70s when my family lived in Alaska. I love the 1970s patchwork fabric my sister and I wore in the reference photo. It also shows me in my petticoat which I wore over everything including my red snowsuit!

In my previous solo show I had only used metal leafing in gold. For this series of paintings I introduced silver metal leafing which I felt worked really well for some of the cooler landscapes. By cooler I mean in color and feeling and in some instances the weather as well. I used the silver tone for the Scottish landscapes and California seascapes, as well as these next two landscapes below. 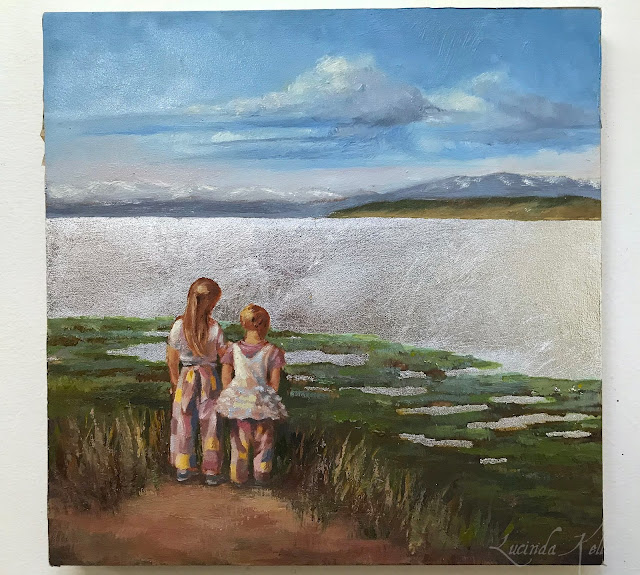 My paternal grandparents moved up to Mariposa in the mid 70s to build a home. I loved being up in that part of California, visiting Yosemite (only about 45 minutes away) and seeing the deer everywhere! We ate raspberries and blackberries out of my grandma's garden and collected more for her homemade jam. Well, that is if we got to the berries before the deer did! We used to play on the property behind their house, pretending to live off the land, while getting our hair caught on the manzanetta branches.

In the summer, it would get so hot we'd head out in our striped tube tops and terry cloth short-shorts to fish, swim and jump off the wooden island in the middle of the lake. My favorite thing was walking with our older teenage cousins to the only pizza joint in town to drink root beer and play pinball on Captain Fantastic.

As I grew older and would go visit, I was mostly on a mission to visit my grandparents and the beauty of the natural world in the middle of California. In early spring the deer would walk through the fog and would seem to float by. The trees appeared like mystics with stories to tell. 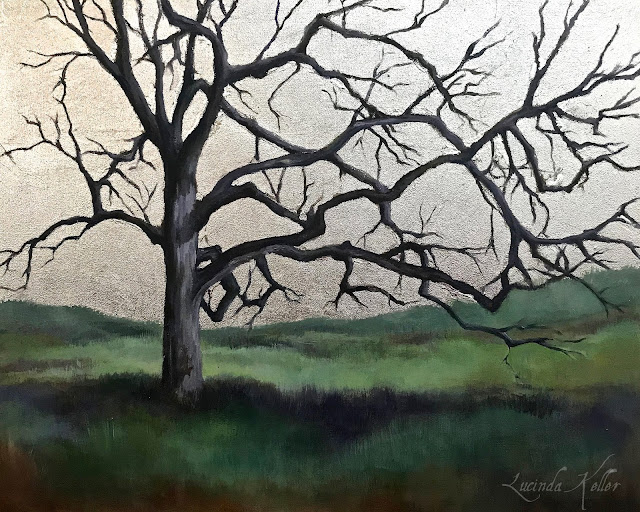 “We must protect the forests for our children,
grandchildren and children yet to be born.
We must protect the forests for those who can’t speak for themselves
such as the birds, animals, fish and trees.”
– Qwatsinas (Hereditary Chief Edward Moody), Nuxalk Nation
Growing up in Ventura, where it was often foggy and cool, we'd take day trips up to Ojai which was only twenty minutes up highway 33 and usually about 10 degrees warmer. My favorite place in the small downtown area was a tiny and narrow Native American shop. I absolutely loved it! Being in there transported me to another time and place. I remember a suede and fur papoose hanging in the window, dolls in native dress on the shelves, and all sorts of unique silver and turquoise jewelry and, best of all, old beaded moccasins. I always thought that wearing them would be the most magical feeling in the world.

These beautiful moccasins, below, belong to my grandmother who was gifted them many decades ago by her Aunt Dorothy. They are very fragile but a wonderful representation of old leather beaded moccasins. While they were not from Ojai, they were the perfect still life to represent that magical shop from my childhood. 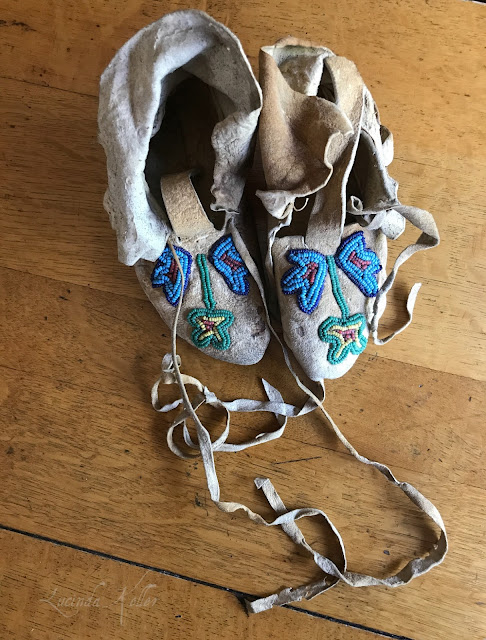 As you can see in the next photo, I had gotten pretty far along with the leather and had added the gold metal leafing but no beads yet! 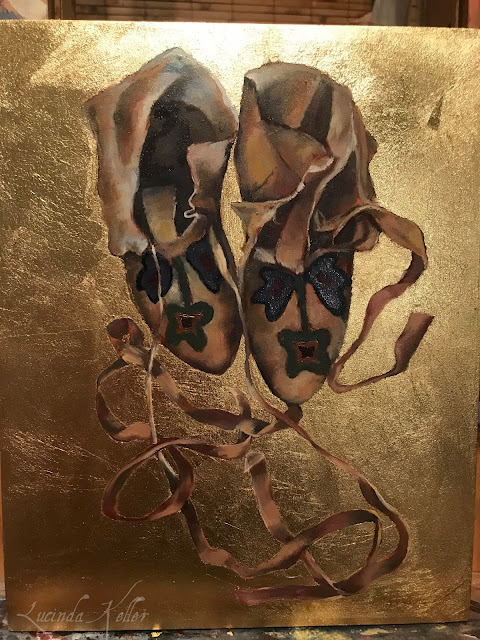 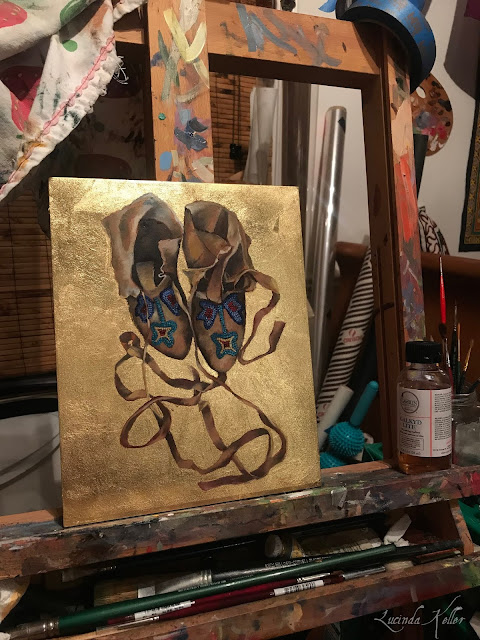 I had to use a 000 brush. Basically, the smallest brush I could find at Blick. It looked OK close up but the important thing is to be able to stand back a couple of feet and have them look effective when you are taking in the painting as a whole. 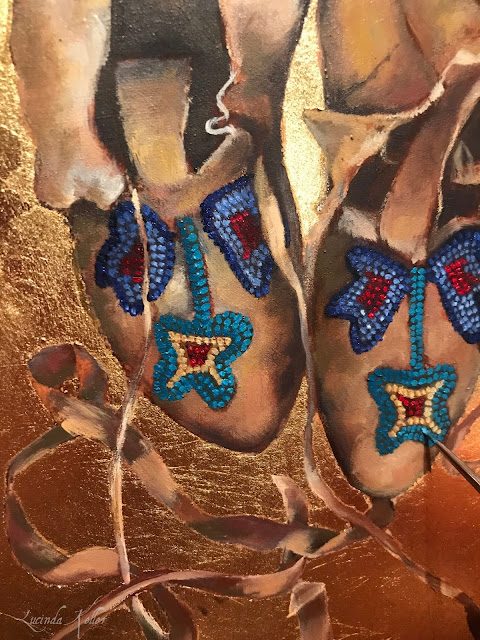 Taadaaa!!! The painting where it should be ... in Ojai. Its new home. 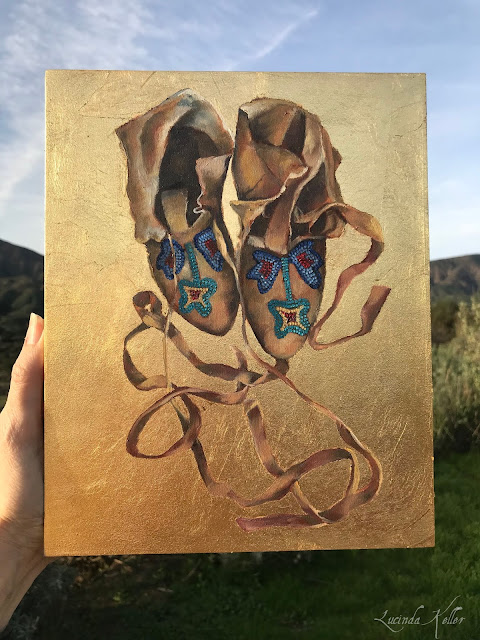 Each of us is put here
in this time and place
to decide the future of humankind.
Did you think you were put here
for something less?
~Chief Arvol Looking Horse