It's her 10th Birthday!
Happy Birthday "B"!!!!
Yep, it's the anniversary of her hatch day today. It was the year 2000 and two months after she hatched in West Hollywood I took her home. When we arrived, I sat on my sofa while this little bird curled up, her head turned back into her wing feathers, and fell asleep in my hands. I didn't want to wake her so I sat there, as still as I could, watching this little being sleep for maybe an hour in the palms of my hands.
Beatrice is a Senegal Parrot and is very smart and playful ... and funny. I swear she has a sense of humor and when I have been sad or sick, she sits and watches me in silence.
I named her "Beatrice" for the character of Beatrice in Much Ado About Nothing. Everyone asks if she talks and yes, she does, but only when she feels like it. Some things like "Hi Baby" and "I'll be back!" are clear as a bell. Others, only a mother could understand. She hangs out in my room outside her cage and when I am otherwise occupied lets out a string of "come here! commmmeeeeere! Up? Potty! Up? Comeeeerrrre!"
Chillin' on my finger ... 2009 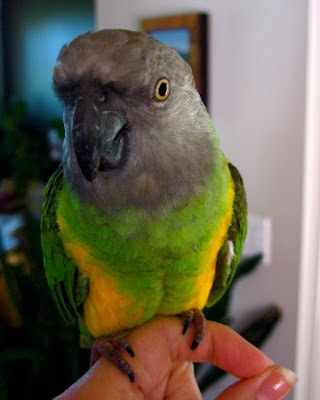 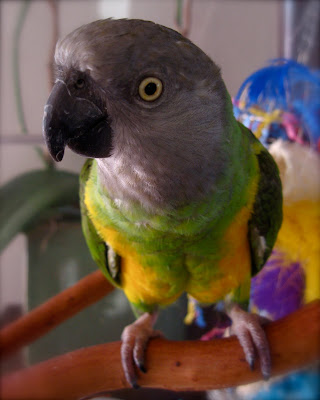 Beatrice on New Years Day 2007 on my clean white duvet cover. Often a risky move but no mishaps that day! 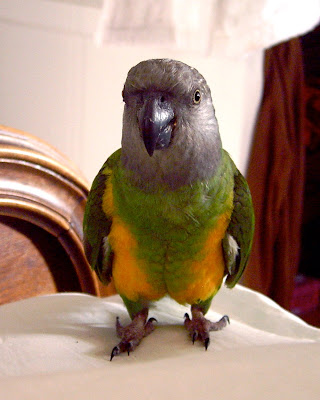 She loves to be cuddled and held and will nudge my finger with her head until I give her a neck massage. She can be quite the hedonist. I always hold her on her back and kiss her belly and say to her, "Who is the best bird? Huh? Who is the best bird?" Her of course and she knows it.
Having animals around, can remind us of the best version of ourselves. They remind us how to love and be loved and to be silly and in the moment. I mean, what could be a greater gift? If I wasn't in an apartment I'd probably have a whole menagerie. Then again, Beatrice might not like it.
The most important thing in life
is to learn how to give out love,
and to let it come in.
~Morrie Schwartz
Posted by Cobalt Violet at Tuesday, September 14, 2010

Happy Birthday to Beatrice! Give her a belly tickle for me!

Yay..Happy Birthday Beatrice! What a sweetheart and such a beauty! Adorable..love her! Maybe sometime she'd like to meet my handsome Indian Ringneck "Dexter" ha ha!I'm sure they'd get along smashingly!
Kiki~

So sweet...my mom and dad have 6 birds and they are just like kids to them...I think their Gemma is the same kind as Beatrice...Happy Birdday!

Happy Birthday, Beatrice! You are gorgeous! You are also lucky because you have a wonderful mom!

Wonderful photos, you can tell how alert and friendly she is.

Kiki I had an Indian Ringneck "Shakti" that lives now with my mom and dad. (complaints from my homeowners association!) She's gorgeous but has mental issues.

happy late birthday beatrice! :) Sorry I missed it...B&B mania does that to me this time of year. I love that you let her perch on your white duvet (on occasion). xoxo