Garden of the Gods

And while I stood there
I saw more than I can tell,
and I understood more than I saw;
for I was seeing in a sacred manner
the shapes of things in the spirit,
and the shape of all shapes as they must
live together like one being. 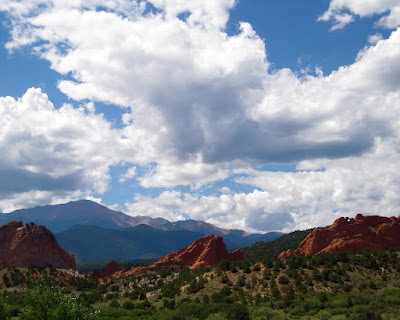 I was given a gift. The gift of airline miles! Well, the real gift was being able to see my friend Tess after almost seven years! We meet at around 20 and became roommates and the closest of friends. We shared everything ... red lipsticks, 90s spandex dresses and our hearts. We laughed a lot and cried a lot and I knew we would be friends for the rest of our lives. That was 20 years ago.

Last week I went to see her in Colorado. We BBQd with her family, visited, went into Denver (more on that later) and went, along with her sister Kimberly, to The Garden of the Gods outside Colorado Springs. It was incredible. You can't believe as you approach, these incredible red rock formations that seem to come out of nowhere!

It was a very warm day and we weren't aloud to drive up to the parking near the rocks because of a bike race. After hanging out and watching a film about how the rocks where formed, we decided we'd return later in the day when the road reopened, rather than hike up and pass out. 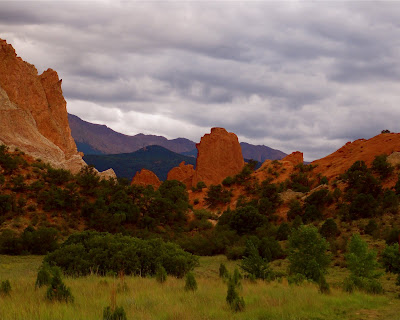 We headed to the "old west" town of Manatou Springs for Mexican Food and Margaritas and came back to the "Garden" later to thundershowers and the road still closed. We went back to the visitors center to pick up a few gifts hoping the road would open up sooner than later.

There, Tess found and gave me the gift of a little silver hummingbird charm for my charm bracelet. With a beautiful view of the sculpted stones, we said a prayer of gratitude for our friends and family. Just as we were beginnig our prayer, Native American music started playing from the speakers. Tess, Kimberly and I smiled and I thought of the women's spiritual/meditation group we were all in together back during the late 1990s.

Right after the prayer, we saw that they had reopened the road to "the Garden." As we left the visitors' center to make our way up to the rocks, several hummingbirds flew around just above our heads. 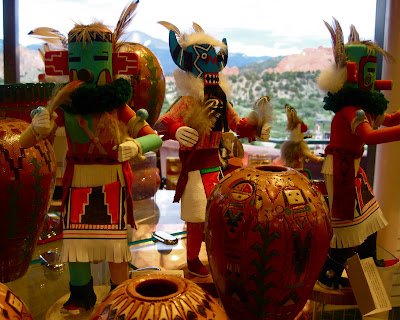 It was perfect being there later in the day. One by one the deer came out ... we could hear bats in their rock caves and the light was amazing! It was so beautiful. I could imagine the history of this magical place and a time when the Native American Ute tribe spent their winters there, in the protection of the rock formations. The air was warm and wet and I could almost hear the ancestors speak. 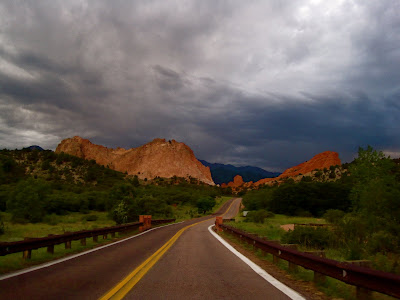 Here is an prayer I want to share from the Ute Tribe that seems to fit this place, in such a beautiful way...

Earth teach me quiet~
As the grasses are still with new light. 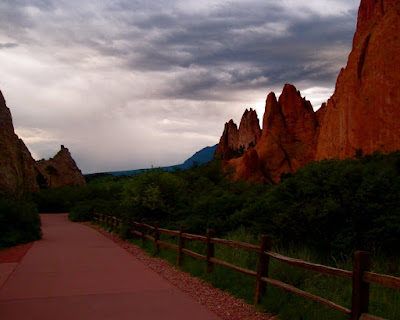 Earth teach me suffering ~
as old stones suffer with memory. 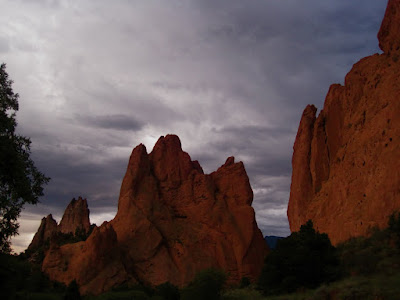 Earth teach me humility ~
as blossoms are humble with beginning. 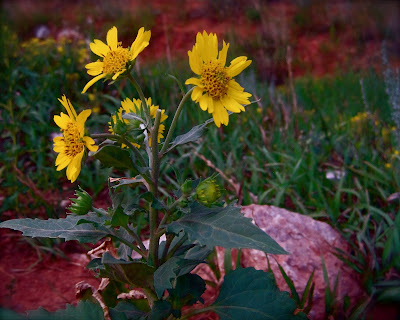 Earth teach me caring ~
as mothers nurture their young.

Earth teach me courage ~
as the tree that stands alone. 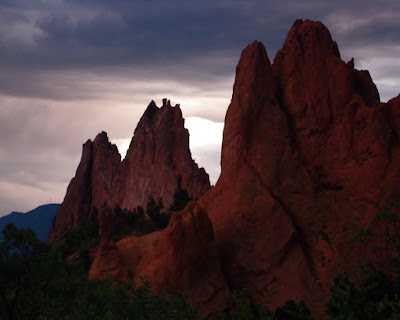 Earth teach me limitation ~
as the ant that crawls on the ground.

Earth teach me freedom ~
as the eagle that soars in the sky. 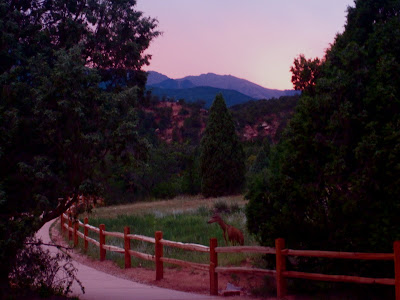 Earth teach me acceptance ~
as the leaves that die each fall. 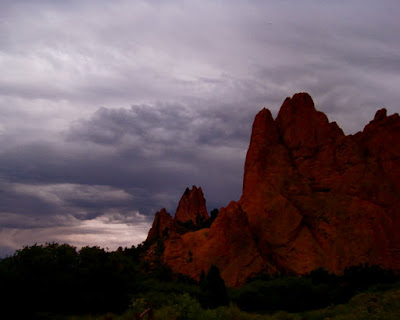 Earth teach me renewal ~
as the seed that rises in the spring.

Earth teach me to forget myself ~
as melted snow forgets its life. 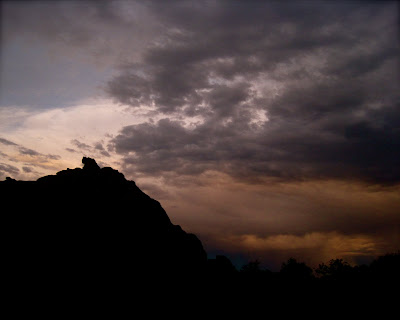 Earth teach me to remember kindness ~
as dry fields weep with rain.

I loved this place. I feel so grateful for all my varied Colorado adventures on this trip. As I mentioned in my last post, I went a little crazy with the camera but I guess that's no surprise!

Anyway, more adventures to come!
And until then ...
Have a beautiful weekend, my friends!

What a beautiful gift, your friend. And thank you for sharing your photographs.

wonderful prayer...something that ic ould really relate to...the first nations people have such a special relationship with our world.....what a beautiful place....it would put you in a spiritual frame of mind...margaritas just loosen you up a bit!

The second photo looks like an eye in the middle of the sky...ancestors watching. What a beautiful place. I imagine you took many many photos!

Your post shows that your time away and with friends was meaningful, lovely and full of beautiful spirit. Your photos are gorgeous. Thank you for sharing this with us.

Sounds like a fabulous visit! I love Garden of the Gods--it is such an incredible place, and I agree--you feel the "spirit" of the place. Pretty amazing. So glad you got to spend this time with your good friend. Love the notion of the hummingbird charm.

Breathtaking pictures - thank you for taking us with you. I have never been in Colorado. I think I should go there one day. A nice weekend to you, Inge

Fascinating work.
It has been delightful
to visit your gallery.
Good Creations

What a magic sceery...what magic, golden light on these rocks and nature...SUBLIME!!!!!

...and how nice and magnificient to meet with a dear; important friend as you have got....: WONDERFUL!!!!!

I do love indeed these mountains; fantastic and truly unique worldwide; your fantastic pics show their beauty amazingly well!!!!!

Thank you so much for stepping into my Tuscany; I loved your visits!!!!!

Magnificent photos and sentiments. The earth and dear friends and words to live by. You have given us so much to think about and be grateful for!

My compliments for your work , thanks for sharing this with us.

what a beautiful post ! wonderful images and skies !
I wish you a lovely week

Wow..beautiful post Lucinda..beautiful and powerful on so many levels( I have a nature soul so this touched my heart)..gorgeous prayers and quotes...beautiful photos! thanks for this meditation to start my morning! And yay..so happy you got to see your fab friend..sounds like fun and a great time..and so very special! Wishing you a sparkling rest of summer...and a powerful transformative Autumn!
I love visiting your realm..always inspiring!
Victoria

Profoundly beautiful prayer, exquisite photos of a magnificent place and on top of all of that, the celebration of a friendship! It doesn't get better than this!

PS I have a special affinity for hummingbirds, too!

Beautiful words and images. Thank you so much for sharing.

I agree with everyone, great photos and thank you for sharing. Very inspirational.

Thank you all for your beautiful, loving comments!
Yes, I am so blessed with my friendship and being able to share this place with my dear friend! Thanks for visiting and commenting!

Excellent photos, they´re really incredible landscapes.
And best of all, reuniting with a good friend after twenty years.
The prayer is very beautiful, I liked it very much.
Greetings from Asturias, Spain.

Awesome shots of a fantastic place!