A bee is never as busy as it seems;
it's just that it can't buzz any slower.
~Kin Hubbard
It may indeed be the "Most Wonderful Time of the Year" (I happen to think so) but it's also the busiest, so I thought I'd do a quick recap of the "goings on."
A week ago yesterday was my Italian written final. 3 essays. I didn't even get to the last! You see, I get a little "involved" sometimes and forget I still have two more essays to write! For the first essay we had to write a proposal for a movie, which included the story-line, how we would cast ourselves and who would be our co-star. Of course, this is all in Italian. Oy. It was intense.
Like I said, I didn't get to the last essay, but I have gotten A's on everything else in the class, including the oral exam (last night) so I am sure I will be fine. Speaking of the oral ... hilARious. Flavio (il mio professore) put my friend Karen and I together with our young friend Karo, who is adorable and I am sure a heart breaker to all the 20 year old girls on campus. We had to write a skit about a guy (Karo) who is caught dating 2 girls. Funny stuff. Best Italian class ever.
Anyway, I also managed to get over to the Italian Institute of Culture (IIC) with my friend Marcello, for the opening reception of Deposito: Selected works from the Galleria del Deposito (1963-1969.)
It runs through February 2, 2012 if you happen to be in the L.A. area.
Designs by Rudi Gernreich
Love this blouse! So groovy! 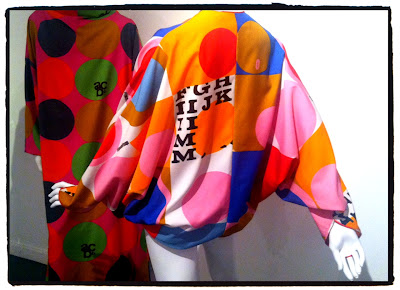 "On display a collection of works from Galleria del Deposito (1963-1968) in Genoa including serigraphs, scarves, trays, multiples, and jewelry created by internationally acclaimed artists such as Getulio Alviani, Max Bill, Eugenio Carmi, Lucio Fontana, Jesus Rafael Soto, and Victor Vasarely, among many others. This show will highlight the critical connections between Eugenia Butler (as she served as the American representative for Galleria del Deposito) and the influential role Italian artists had on the L.A. art scene."
From what I gathered, these designs by Rudi Gernreich used textile designs created by Italian artist Eugenio Carmi, who was actually there there at the Institute that night. He was being interviewed on stage, giving an introduction to the exhibition and background on the Galleria del Deposito. Eugenio Carmi was born in 1920 in Genoa, so ... not the youngest of gentlemen but very charming! (Not shocking, I suppose, being Italian, and all. :)
Marcello and works by Eugenio Carmi 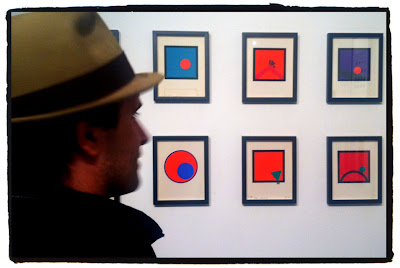 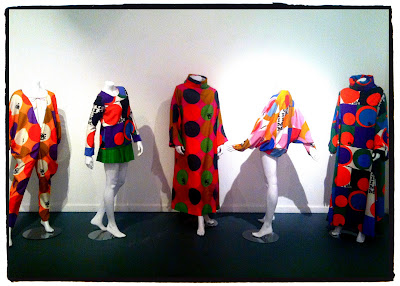 How fun is this?! 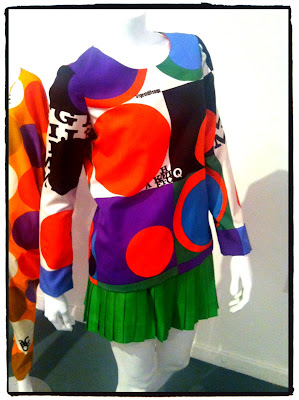 December is birthday time as well, kicked off by my niece Rachel who turned 18 on the 4th!! We celebrated with a Moroccan feast and belly dancers at Dar Maghreb Restaurant in Hollywood. I am actually convinced that that might have been the most I've ever eaten, in a single sitting. I wanted to lie across the couches and take a nap!
Rachel being a great sport ... 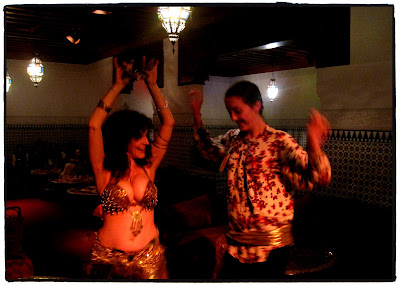 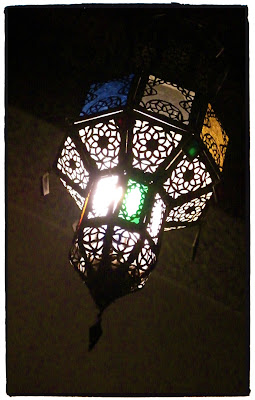 These photos below were taken from substituting an art class at the Wizard of Art one Saturday afternoon. I just had to share them! These girls were in the same class, obviously bringing up the cute quotient exponentially.
Two Red Huskies in the Moonlight
pastel on paper 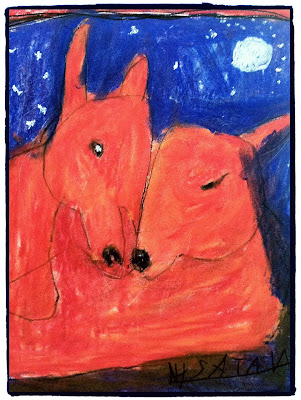 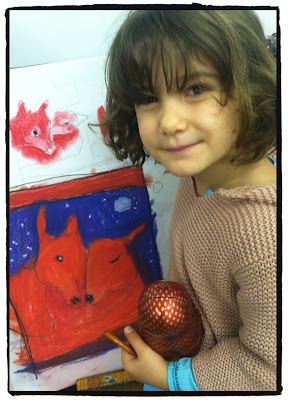 Man on the Moon
pastel on paper 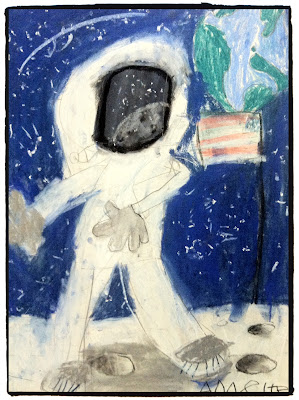 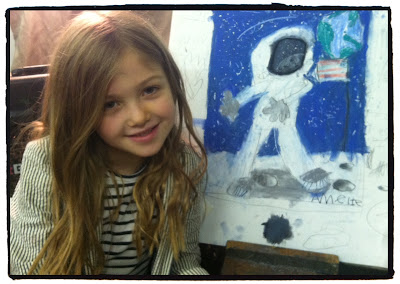 Couldn't you just die? So cute!!!!
December also brought with it, a long overdue trip to the Korean Spa last Thursday. I say "long overdue" because my dear friend Shea has been trying to take me for my birthday for three years now! Something has always come up. Someone gets sick or I would have an audition ... Anyway, we made it!!!
I tell you, after soaking in various tubs and steaming ourselves into limp noodles, we got scrubbed almost every inch from head to toe. It was amazing. I am not kidding, my skin hasn't felt like this since I was 3! Smooth as a baby's bum! I highly recommend it. Perfect relaxation in the midst of the holiday season, if you can swing it. 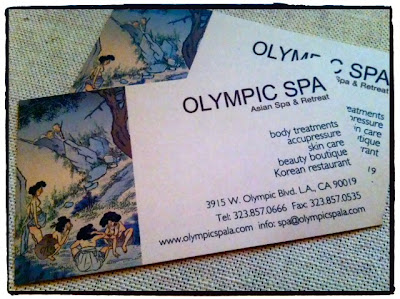 That night, after the Korean Spa, was the opening of "Snap to Grid" at LACDA (Los Angeles Center for Digital Arts.) Snap to Grid is sort of a fundraiser and they except everyone's work. I thought it would be fun if my nieces and I were all in it together, so Rachel, Elizabeth and I sent in our digital photo images. Rachel, unfortunately, couldn't make it from Ojai, so Elizabeth and "represented" that night downtown at art walk! The parking was insane but we finally made it inside.
Snap to Grid 2011
LACDA 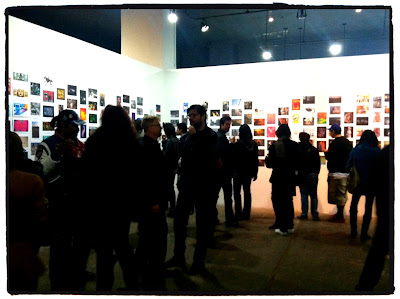 It looked cool with everyone's pieces up on the wall together. It became one large piece of art and was definitely stronger as a whole than the individual pieces themselves. (At least that's what Elizabeth and I thought)
Mine is on the far left ... it's Santa Maria Sopra Minerva in Rome with a big ol' magical light beam coming through the window. 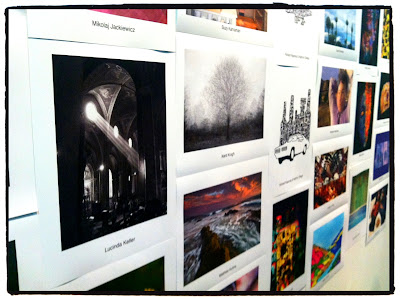 Elizabeth next to her piece (with the horn) and Rachel's piece next to it (with the candles.) They must have seen the same last names and hung them together. I will have to do a post of more of their photography and art. They are so creative!!! 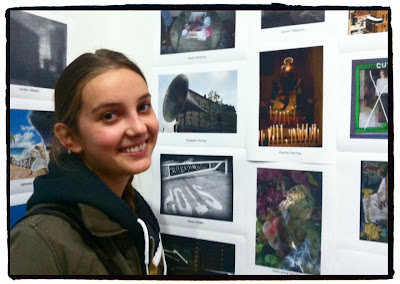 The next day, Friday, was my birthday so I picked Elizabeth up at USC and we had breakfast at Bottega Louie in downtown L.A. It reminds me of being in Europe with it's cafe tables, beautiful displays of sweet treats and high ceilings! It was a smaller breakfast menu so now I am going to have go back on the weekend for the brunch menu. Outside of being with my niece, the best thing was the beignets! I don't think I'd had one since New Orleans, circa 1987!
Bottega Louie 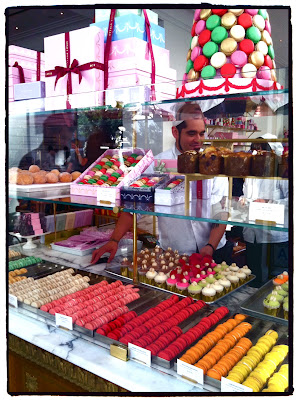 That evening I met my sister Penny and 3 of my oldest friends for dinner at a little Italian restaurant, which was a beautiful quiet evening, followed by my Saturday pastel class the next day, a lovely dinner with my parents and catching most of Rudolf the Rednosed Reindeer that evening. We finished off the night with a viewing of my "go to" holiday movie, Going My Way. I know I mentioned it last year but I thought I would remind everyone anyway. ;) 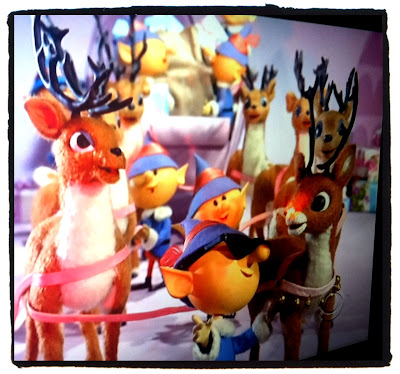 These are different videos from last year!
After having breakfast with my cousin Jennifer Sunday morning, I headed back to L.A. to host a pot luck reunion for my figure drawing/art studio pals at my place that night. At the risk of making everyone crazy and sick of me, I think I will post that later! Besides, I'm having my neighbor over for dinner in a bit. Tomorrow night? Making Pomander Balls in Highland Park.
Next week I am carving out time for quiet and reflection. That's the plan anyway.
OH! And guess what? Turns out that December 9th (my birthday) is National Pastry Day every year! Who knew?
Hope everyone is able to have some fun this holiday season,
make some beautiful memories for the future,
and not do anything they don't want to do!
Blessings, light and joy!
Posted by Cobalt Violet at Tuesday, December 13, 2011

I guess we are all crazy busy...why do we do this to ourselves! It's fun but boy I'm tired to and "it" has only begun : ) Glad you posted the name of the Korean spa....we NEED to make a plan. Your story was hilarious at dinnerL O L !

Wow! Looks like you have been very busy. Good to hear you had a great birthday and pampered yourself at the Spa. They are wonderful places to visit. I think I will try and visit one soon!
The children's artwork is adorable, so natural and sweet.

Have a Great Christmas, Lucinda and a very Happy New Year!

Busy is an understatement, girl! Happy Birthday and many happy days ahead...Funny, my niece Rachel is also a December baby! The 25th...hope you have a wonderful holiday season.

it sounds like your life is overflowing with wonderful events and experiences. how wonderful! happy birthday to you, wishing you a marvelous year!

Wow! What a wonderful exciting time you have had. Congratulations on getting through your Italian final. Love the children's artwork. My niece Bethany is 18 like your lovely Rachel, and I am dying to see her over Christmas after she has been away doing her first year of Uni in New Zealand.

Looking for the Best Dating Website? Join to find your perfect match.

If you want your ex-girlfriend or ex-boyfriend to come crawling back to you on their knees (even if they're dating somebody else now) you got to watch this video
right away...

(VIDEO) Have your ex CRAWLING back to you...?