Dutch Light in Rome ~ Vermeer at the Quirinale

After seeing two of the most famous Baroque churches in the world, I headed Southwest down the street to the Scuderie del Quirinale. Before leaving for my trip, I'd done my research on what art exhibitions would be in the places I would be visiting. On my last visit to Rome, I was lucky enough to catch one of the largest ever retrospectives of Caravaggio at the Quirinale, so I figured I'd better check what was going on. You don't want to get back from a trip and realize that you missed a once in a lifetime exhibition.

A couple of weeks before arriving in Rome, I found out there was a Vermeer (1632-1675) exhibition going on! It seemed funny to see Dutch masters in Rome but it was also too amazing to pass up. Some scholars figure Vermeer may have done around 50 paintings, 37 of which are known and documented. So, when you find out that 8 out of the 37 paintings will all be in one place, along with another 50 works by his contemporaries, you can't pass it up!

As you can see, (below) when I got to Piazza del Quirinale, it was still raining, so going inside a cozy museum was perfect. (And unlike the Vatican Museums they let me check my coat! Don't you hate carrying around a big ol' coat?)

Here, in the Piazza, are the statues of the Dioscuri, with the two Roman  "Horse Tamers," Castor and Pollux topped by an obelisk, moved from the Mausoleum of Augustus in the 18th Century. 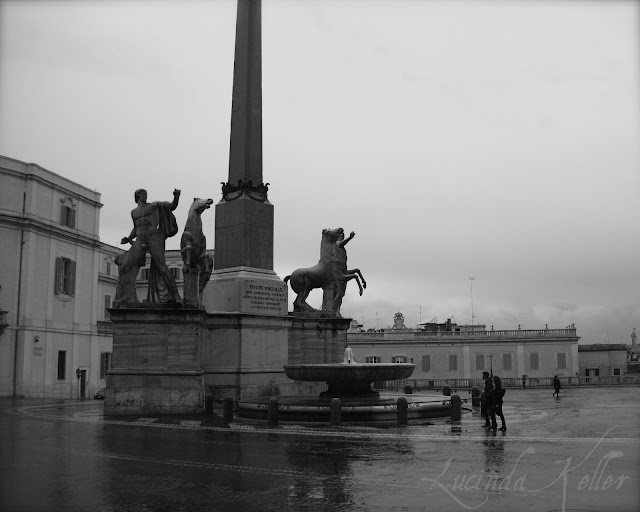 The Scuderie del Quirinale, built from 1722-1732, had previously been the Papal Stables and the main winding "stairway" is stone with very, very deep steps, I am assuming for the horses.

Oh, and here's a little something from the Holland Baroque society to go with the exhibition! 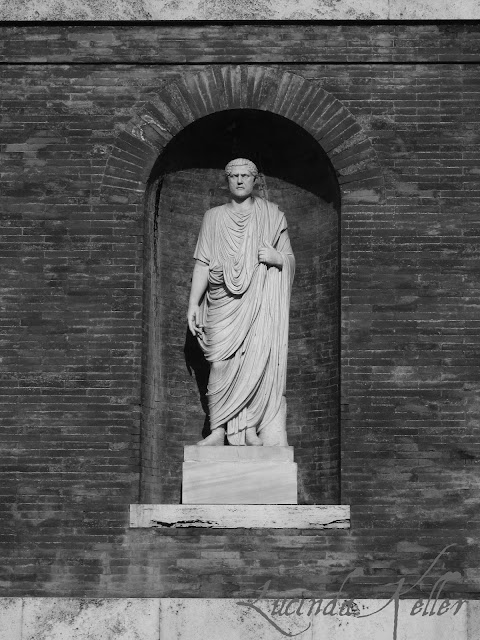 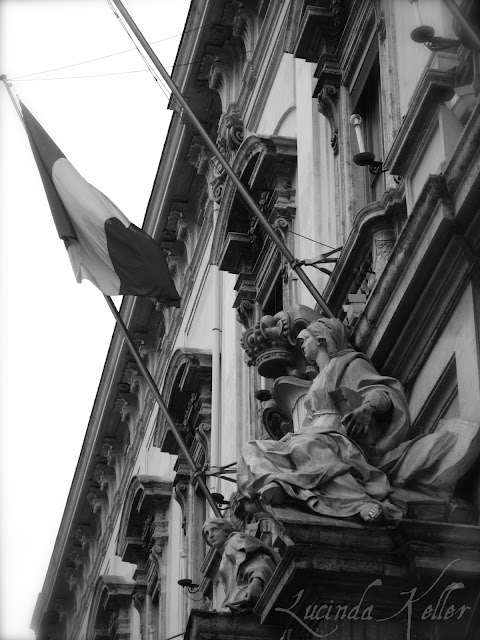 I realized when I was checking my coat, that I didn't have my favorite little angora hat that I had gotten in New York City in 2001! I'd lost it before, in a NY theatre in 2010, after seeing a show, but the stage manager was kind enough to retrieve it for me the next day. (My friend Larry, whom I was visiting, couldn't believe I got it back.) This time, I figured I must have dropped it in one of the Baroque churches or on my walk to the museum. I couldn't believe it. Again?

I decided to enjoy the exhibit then afterward I would retrace my steps. For now the churches were closed (unless it's a huge basilica most of the little churches all close for about 3 hours or more in the middle of the day.) If it was meant to be, my little hat would find it's way back to me.

Outside of the incredible use of light in Dutch paintings, (1600s) I also love how they created such beauty in depicting everyday life and activities. It seems almost a lesson in mindfulness, being in the moment and finding beauty in whatever task you are doing.

The first painting in the exhibition was The Little Street, by Vermeer, visiting from the Galleria deli Uffizi in Florence. It was a bit smaller than I'd imagined but it was an absolute jewel. It was ... Magnificent. It reminded me of fine enamel work, probably in part, because of the layers of varnish, but it had these tiny, absolutely beautiful, details, and in person, the painting seemed to glow. 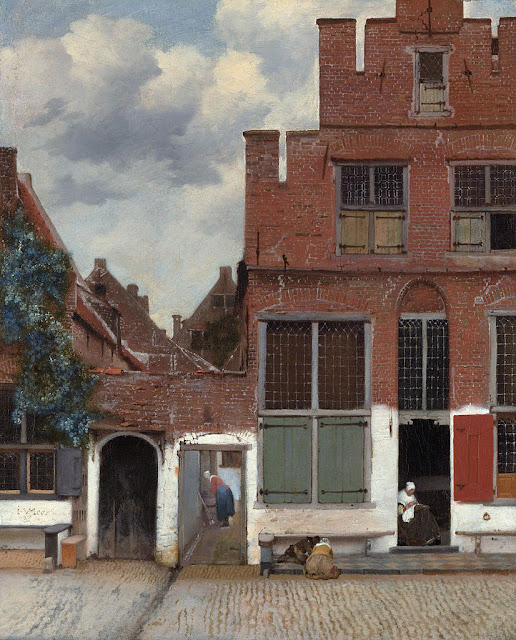 Girl with the Red Hat wasn't one of my favorite Vermeer paintings, until seeing it in person. It's small but it's mighty. (8 x 10"? Or maybe smaller?) The light is obviously gorgeous but the background was surprisingly loose and sketchy, which made the figure pop even more. Another little Vermeer jewel! 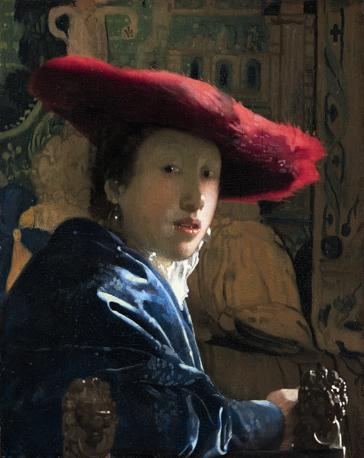 I took this photo below on a previous trip, looking out from the cafe. I ate in the cafe this time too. I knew I need a break for lunch and to get off my feet so I wouldn't rush through the rest of the exhibition. It's also a relatively inexpensive way to go. They also have a restaurant. 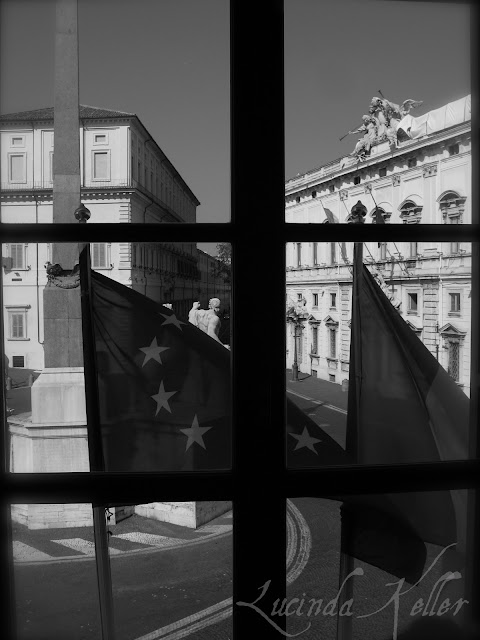 Outside of Vermeer, my two favorite artists in the Exhibition were Gabriel Metsu and Pieter de Hooch. Fortunately, there were a few of each but these are two of my favorites. 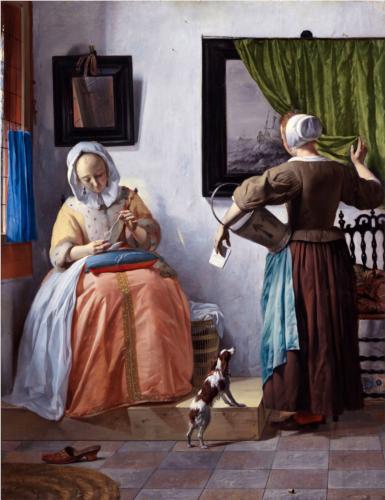 Pieter de Hooch
Portrait of a Family in a Courtyard in Delft (circa 1658)
Wien, Gemaldegalerie der Akademie der bildenden Kunste

The detail on this is unbelievable and so lovely. 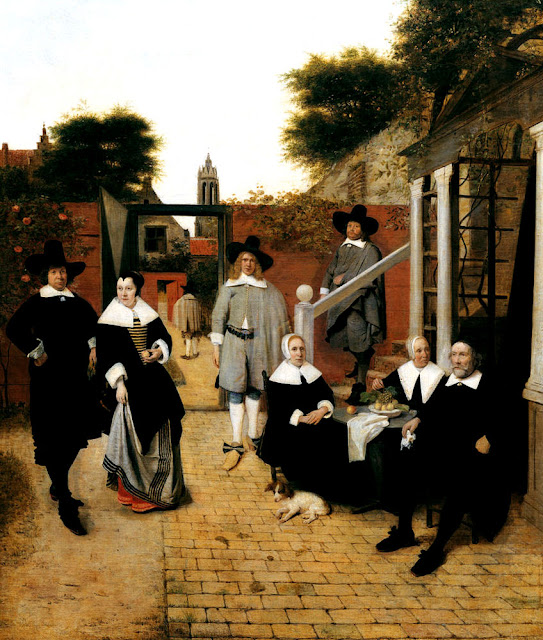 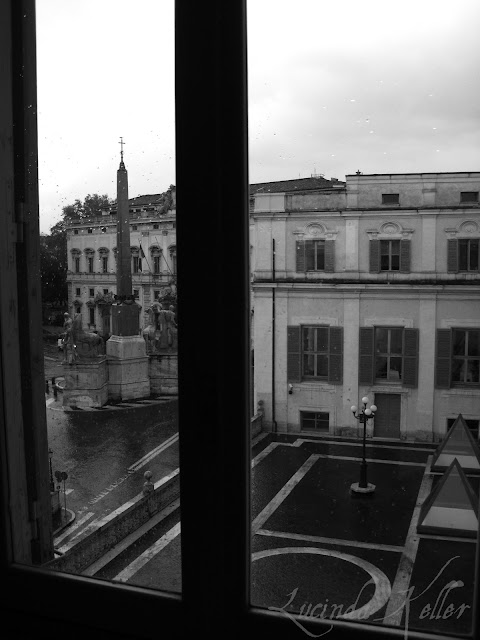 Vermeer - The Golden Century of Dutch Art at Scuderie del Quirinale from ikono tv on Vimeo.

Unfortunately, I couldn't take pictures in the gallery. If you want to see more of what was there, please visit the website HERE.

The exhibit goes through January 20, so if you are in Rome, don't miss it, you have two more days!

After my wonderful visit with the Dutch Masters, I retraced my steps to San Andrea Quirinale to find my hat. I asked the caretaker but no luck. San Carlo was still closed so I made my way to Piazza Repubblica, Santa Maria degli Angeli, Santa Maria della Vittoria and Santa Susanna (more on them later) and then, finally San Carlo was open.

I found the sweet little caretaker who was slight man, with only a bits of grey hair at his temples, and in my broken Italian "questa mattina, ho perso il mio cappello ..." I gestured to my head like I was playing charades, and tried to communicate my situation.

"Ahhh!!!! Questo?" He smiled, lifting my hat up off a wooden mantle.

"Si!!! Grazie! Grazie mille!" (Yay!)
I was happy and relieved as I headed back out through Borromini's masterpiece, taking the opportunity to, once again, take in his marvelous dome.

Anyway, got my hat back. :)
It's the fuzzy one I'm wearing here.

Everything has beauty, but not everyone sees it.
~Confucius

Lucinda, your photos are divine. Will you be drawing the sights? Your hat found you.

Vermeer was such an expert at light and shadow! How lucky that you were able to see this exhibit AND to have found your hat AGAIN! You may ned to attatch a string to it like the ones to keep your mittens from getting lost!

Stumbled across your blog today and enjoy it a great deal. I am impressed and I am not impressed easily.

Vermeer is one of the truly great artists. I confess to not being overly knowledgeable in the arts but even I know and appreciate his talents.

Ah, Vermeer in Rome...what a combo! Did you see the Girl with the Pearl Earring? My favorite.

SO NICE TO SEE YOUR VISIT TODAY! You know, I so love Dutch art and some of my best friends are Dutch. The language, the culture and heritage is so very special to me. You have once again captured beauty and enraptured me into it all! Happy new year! Anita

Vermeer....LOVE....and seeing these pics, I EVEN MORE get your comment of warm cozy tea and a bookstore on a rainy day!

Thanks for the comments and stopping by!!! Hope you have all been having a great week!

If you need your ex-girlfriend or ex-boyfriend to come crawling back to you on their knees (even if they're dating somebody else now) you got to watch this video
right away...