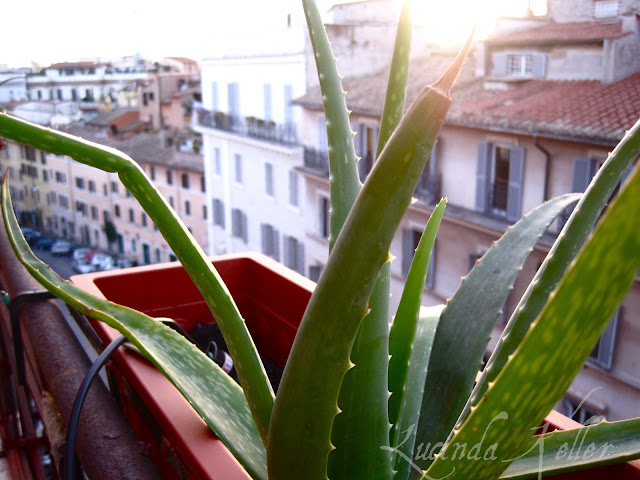 This was my little place In Rome. If you didn't know the exact address, you would never find it. Yes, that's my luggage out front. I carted all that around Italy for more than 3 weeks but remember ... it was cold! So, there were big sweaters, scarves, hats and gloves involved and when you are visiting Italy, you have to look cute, or at least try to look cute. Fortunately, I didn't move around that much. 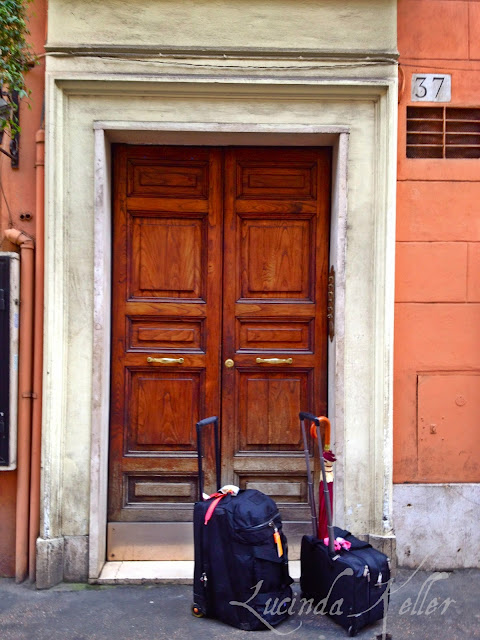 As I said before, I was on the 3rd floor but really the 5th floor because there are shops on the street level and then the ground level. After that, they start counting. It was up one flight of stairs to the lift. 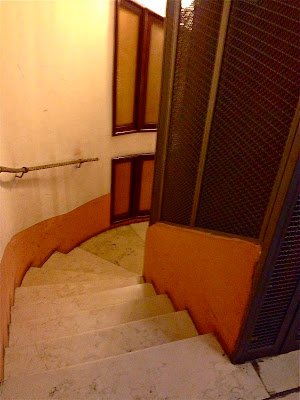 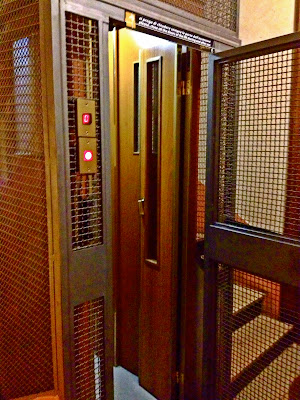 Hanging my scarves made them easier to grab, and added a little color and little boho feel to the place. 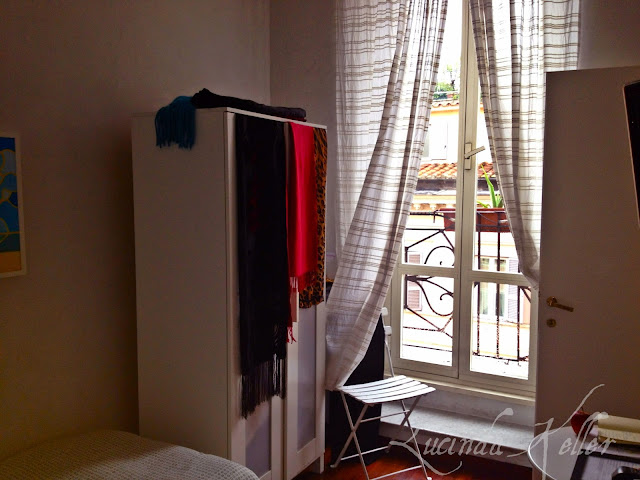 After four nights on this mattress, I ran into the guy who runs the place and he asked how things were going. I told him things were great but I also tried to explain that I was starting to feel the springs poking my ribs. "You want a new bed?"
"No, no," I said, "just a blanket to put over the mattress. Just an extra blanket."

That evening, after traipsing all over rome, I had a new mattress, twice as thick as the first and seemingly brand new. Yay! 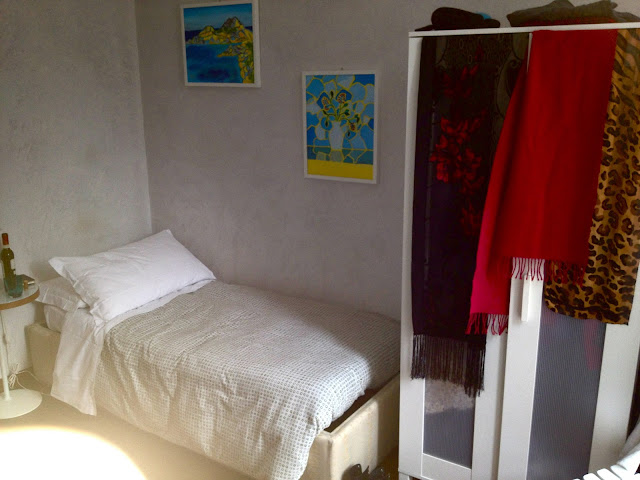 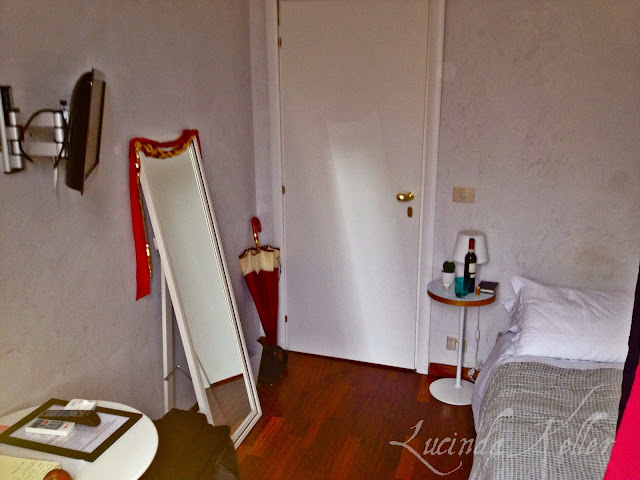 Italy isn't big on getting drinks "to go" and there weren't any cups in the room, so I went on a quest. It was a quest because most of the shops around me were selling shoes, ties or clothing.

I had gotten orange juice at the little shop up the street and things to nibble on (yes, there was a little fridge!) but I needed a glass! Walking around near the Spanish Steps, there are a lot of very swanky shops. VERY swanky.

Anyway, I managed to find a cute little shop selling this fabulous little glass tumbler for 7 euro. It's smaller than it looks because that's a half bottle I carried out of a restaurant. The umbrella was an emergency 15 euro purchase at the top of the Spanish Steps, but was much better than my little fold up I'd brought from L.A. You need something big when it's raining sideways. 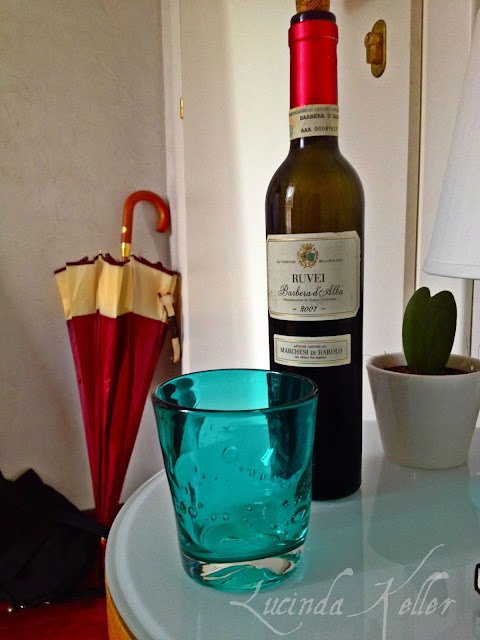 It would sound more romantic to say I was having my wine and relaxing in the room but I think that's O.J. in the following shot. 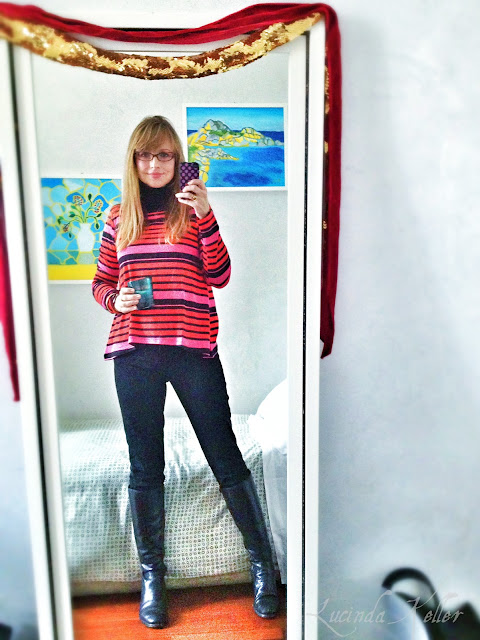 One travels more usefully when alone,
because he reflects more.
~Thomas Jefferson

(and I did a lot of reflecting. not just in the mirror ;) 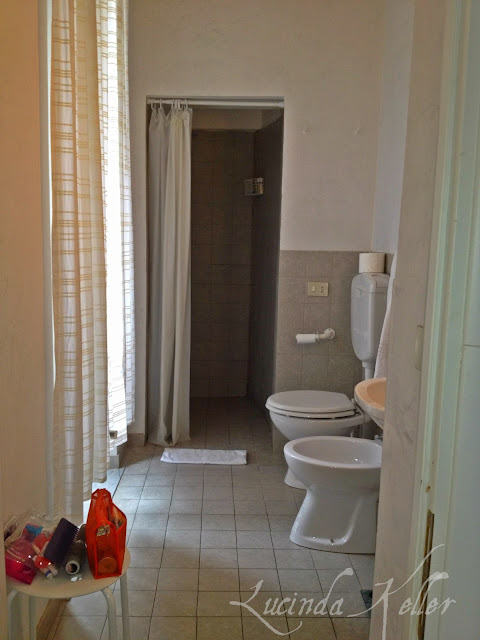 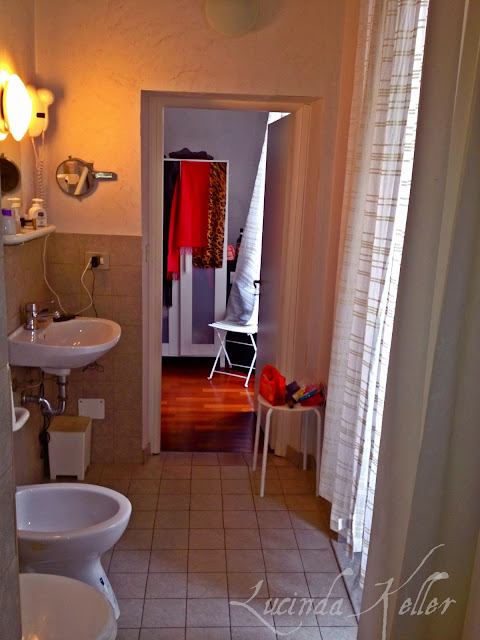 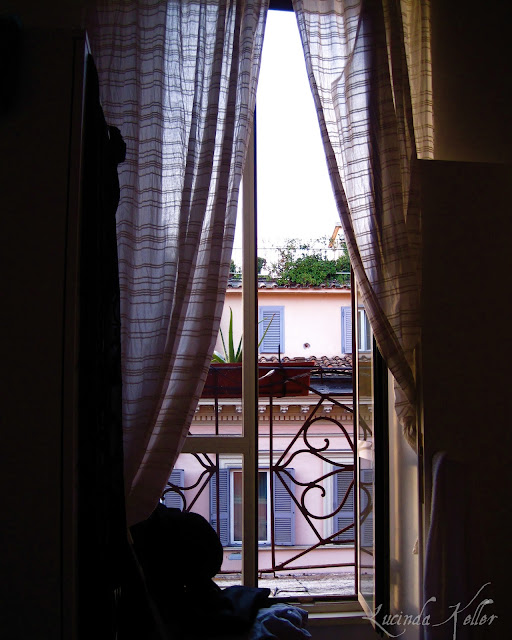 Gotta love the bucket, on the left, collecting rain water. I loved standing on this terrace and looking out. This photo (below) reminds me of an old Sophia Loren movie. She would have been in Naples but it reminds me of it nonetheless! 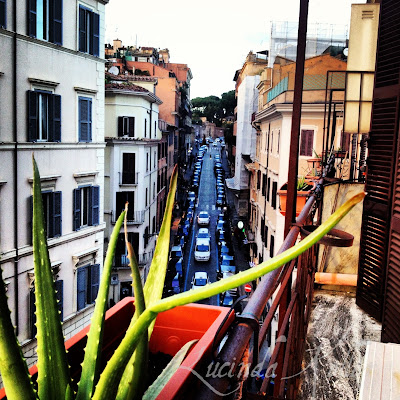 Yummy treat from up the street. A girl's gotta have protein! 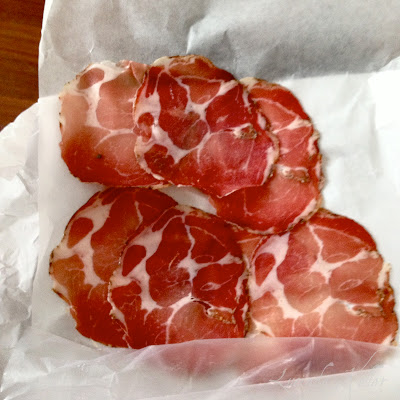 What's funny about this photo below, is if you notice the Garnet Hill pillow case. Yes, I brought my down pillow from home!

The thing is, that when you travel in Europe, unless you are staying somewhere very Chi-chi-la-la (pronounce 'she she' la-la) you could very well end up with a pillow that's something akin to a watermelon. Plus, it's nice to have on the airplane. I highly recommend it.

(But definitely put your pillow in a case that's a print or something that won't be confused for hotel linen or you could loose your pillow and your case!) 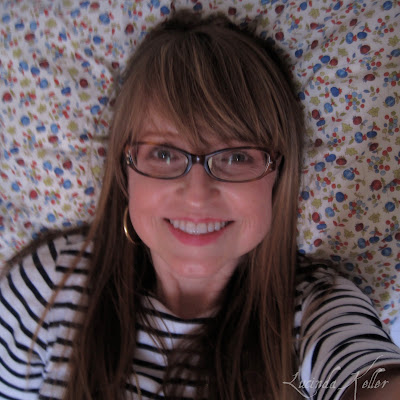 Count up five floors, to the floor on the terrace. I was on the right hand side of the photo, looking over Via Francesco Crispi. Via Sistina runs along the left side. (I'm sort of looking South East if you are trying to figure it out on a map.) 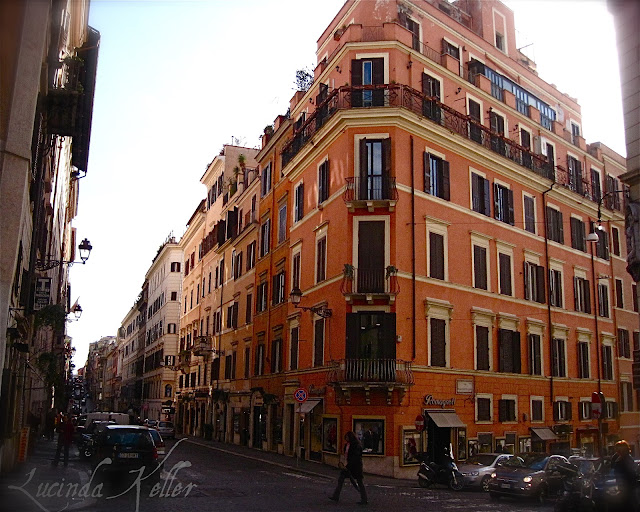 So, this was my little home in Rome for 9 nights. GREAT location, and super affordable, for Rome. I was there in low season and it was 49 euro a night, including my Italian breakfast of cappuccino, brioche and juice.

The only thing you have to watch for in that neighborhood, is that some of the restaurants are more expensive than what they should be because they cater to tourists. It's a trade off because this was so close to the Barberini Metro Stop and the Spanish Steps. Plus, I felt very safe in that neighborhood.

Though we travel the world over to find the beautiful,
we must carry it with us
or we find it not.
~Ralph Waldo Emerson

Lucinda, 49euros? I had to pay 200 over by the train station. How did you find it? My daughters and I were at the Trevi fountain tossing our coins when a rainstorm (they said it was a 200 year storm and it was on CNN) blew sideways and we had to walk back to our hotel in it. Soaked, we then had to take the night train to Nice. Other than that I love Rome so much and do hope I'll return one day.

well Lucinda this is a very nice post!I think you have enjoyed a lot these fabulous days in Roma !

Heavens to Betsy....I am IN like Flynn! Love this spot!

Hi Lucinda..Yay..Beautiful and charming post...your place was enchanting..loved the gorgeous picture of you in the mirror with your tumbler..yes what fabulous colored glass..such an awesome aqua-blue! As always your photos and images are beautiful..loved the doors too..! Thanks for sharing this gem!
Victoria

Seems you had a fabulous time, love this post and so lovely to "see" you too x x

italy is so beautiful and that apartment seemed perfect!

girl, you do get around! and i sure love that you take us with. you look so pretty and happy in your pics.

I carry a hot-pink down pillow with me on every trip...a definite boost to good sleep in strange places.
Spent an evening on the Spanish Steps...lovely location, a little gelato and then we walked home to our tourist digs (we were on a Rick Steves tour of Italy and they made all the arrangements for us...very nice~)