After my little journey around Piazza Repubblica, I made my way back north, to Via XX Settembre, to three more of the landmarks on the Quirinale Hill. (I know, it's endless. It's the same street as St. Ivo and St. Andrea in previous posts.)

The first might be recognizable, if you had to memorize church facades in Art History class. The facade by Carlo Maderno, completed in 1603, would end up having enormous influence on the architecture of the baroque era. So influential was Maderno, and apparently popular with the pope, that he was then commissioned to design the nave and great façade of Saint Peter's Basilica. 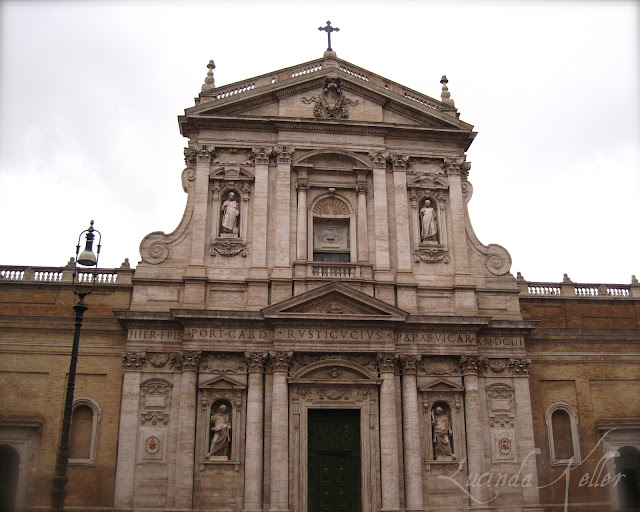 Though churches on this site go back to 280 AD, this church was rebuilt from 1585 to 1603. The church is said to be built on Saint Susanna's house where she was martyred. (Similar to the church of Santa Cecilia in Trastevere.)

As you can see, the church (like most of the churches) was very very dark. Guess they are saving on the light bills, and I am sure it's better for the frescos, by Cesare Nebbia, which cover nearly the entire interior. 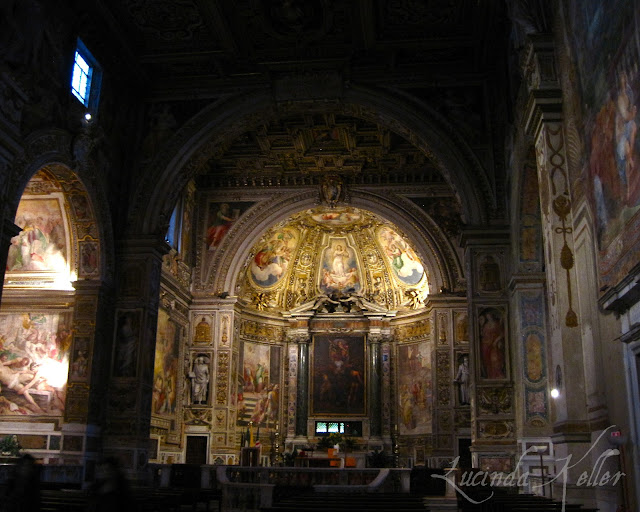 In the early 20th century, there was a growing American population in Rome and Santa Susanna was in close proximity, at the time, to the American Embassy. So, in December 1921, Pope Benedict XV authorized Santa Susanna become the national church in Rome for American Residents and visitors from the U.S. 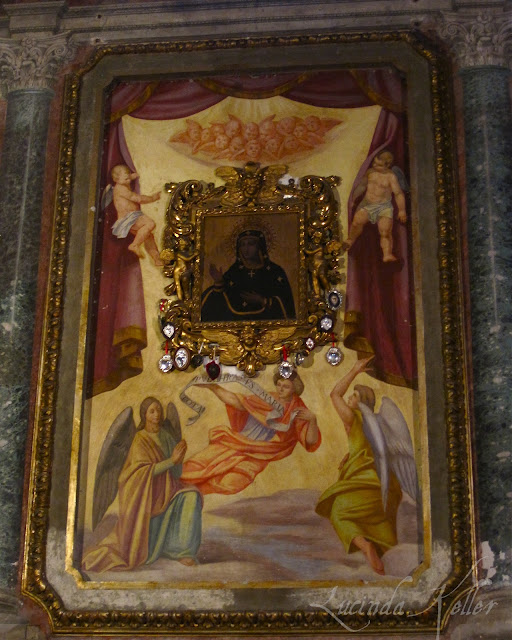 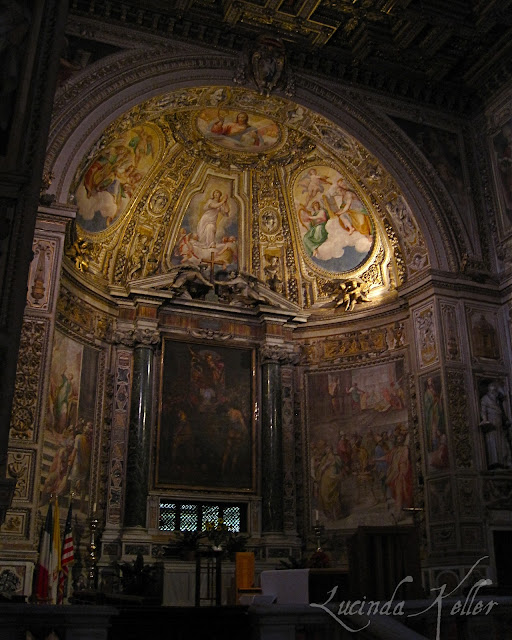 Below, the Martydom of S. Eleuterio by Cesare Nebbia and Giovan Battista Pozzo 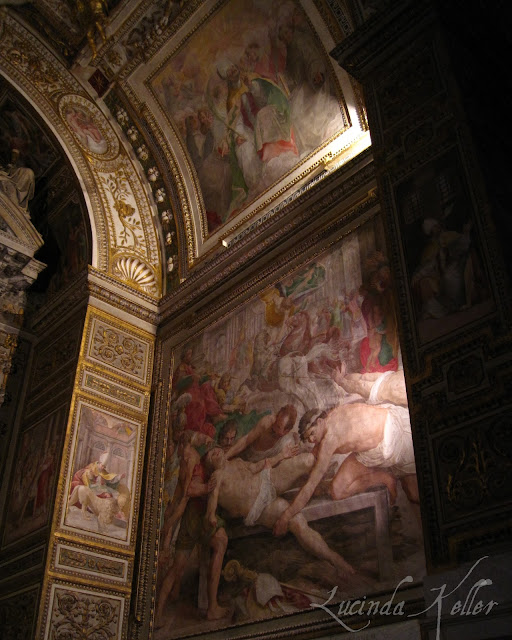 Five Saints are buried at Santa Susanna... Saints Susanna, Gabinus, Felicity, Eleutherius, and Genesius. To read there stories, click here. Though frankly their stories are pretty depressing, so if you're feeling blue, I wouldn't go there.

Love the water on the street reflecting the facade in the photo below ... but that car! Oy! I wanted to find the owner and tell him he was fouling up my photo-op! Oh well. Photoshop anyone? 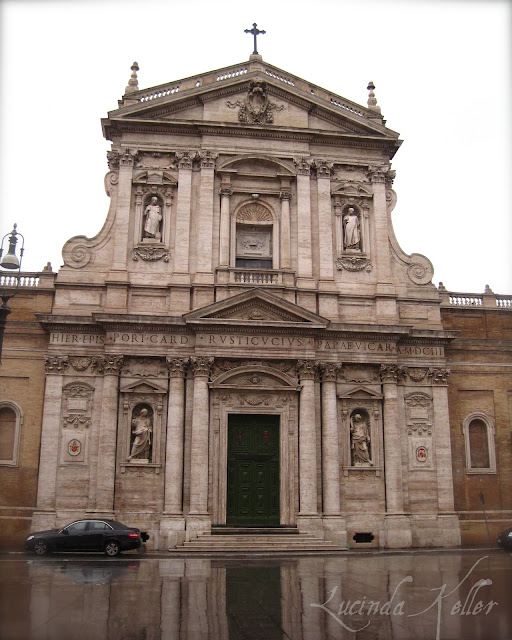 If you turned your head to the right, from the view above, you would see the view in the photo below. I pretty much took both photos from the same spot. In this photo, on the left, is Santa Maria della Vittoria and on the right, a huge wall fountain. I had no idea what the fountain was because (and I'm guessing here) they couldn't fit yet another landmark on my little tourist map.

Honestly, can you imagine being a map maker for Rome, and trying to fit everything on a map?

Anyway, I looked it up yesterday and it turns out the wall fountain is the Fountana dell'Acqua Felice, (The Fountain of Moses) designed by Domenico Fontana, and was built from 1585 to 1588, and it's not even on Google maps. 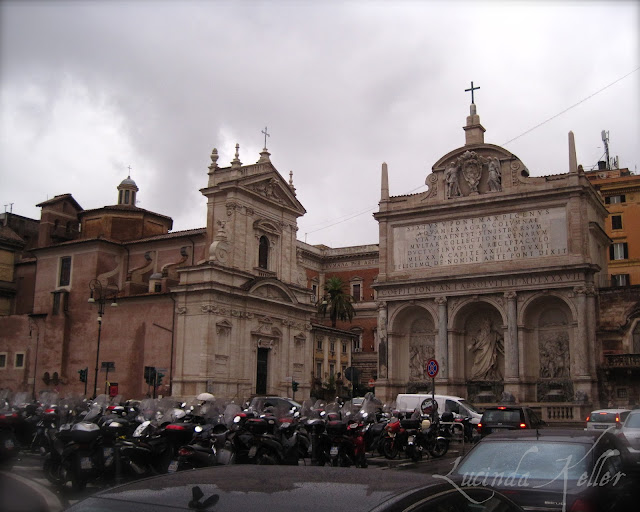 The fountain was commissioned by Pope Sixtus V. When he became pope, all the Roman aquiducts were basically out of commission and the only place for people to get water in the city was over by, what is now, the Trevi Fountain. So, the Pope restored the Acqua Felice aqueduct, naming it after himself, of course. (Felice was his last name.) This fountain is where the aqueduct would provide fresh water to the neighborhood. 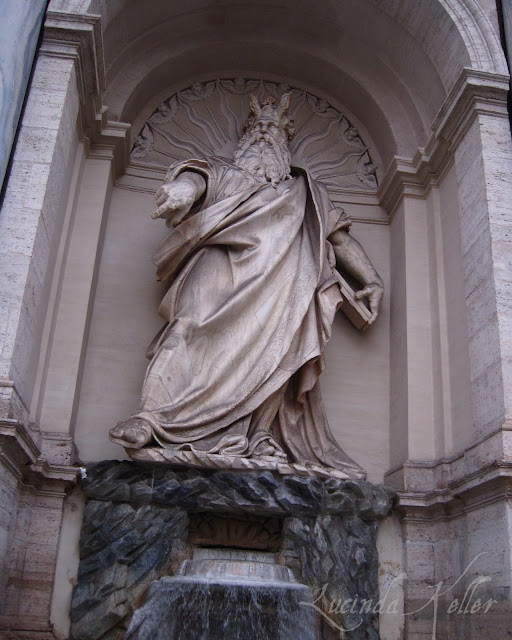 I'm not sure what Moses is pointing at, but he looks pretty serious about it. He was made in 1588 by Leonardo Somani and Prospero da Bresciano. Apparently, Prospero, carved the statue while the slab of marble was lying down and ended up not getting the proportions right, so the statue was ridiculed. The locals supposedly call it "the ridiculous Moses" ... "il Mosè ridicolo." I guess he is pretty stocky. 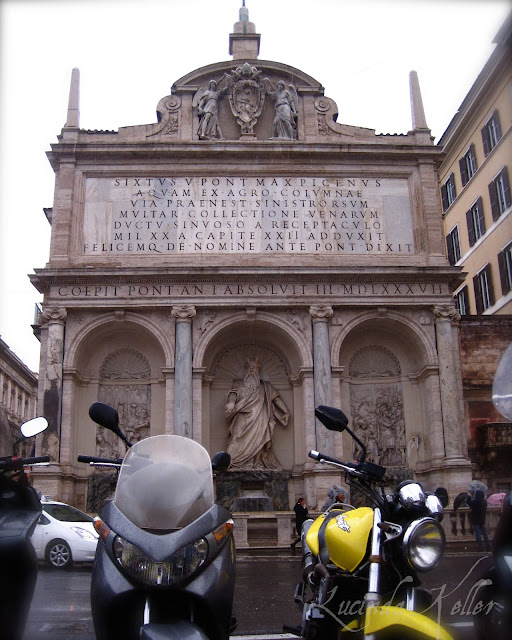 In the niche, to the left of Moses, is Aaron Leading the Israelites to Water, by Flaminio Vacca and Pietro Paolo Olivieri. Here it is, close up ... 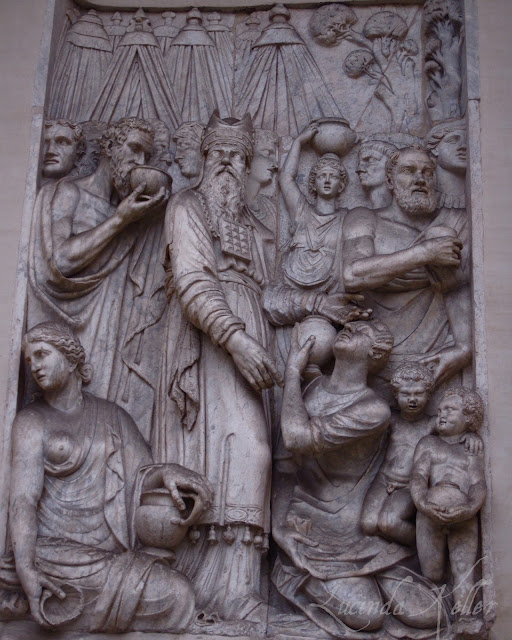 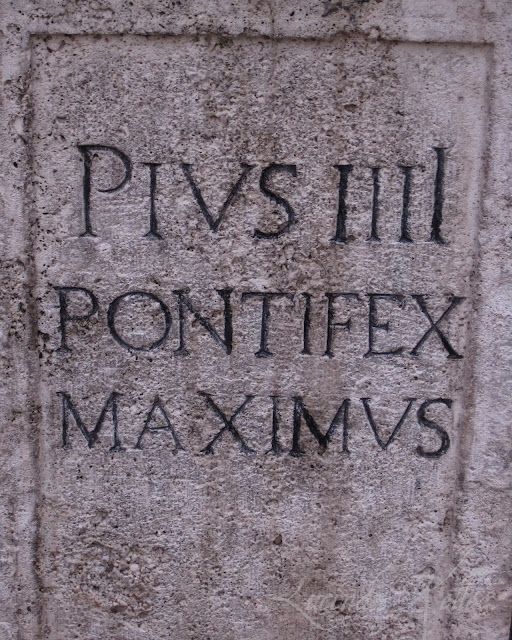 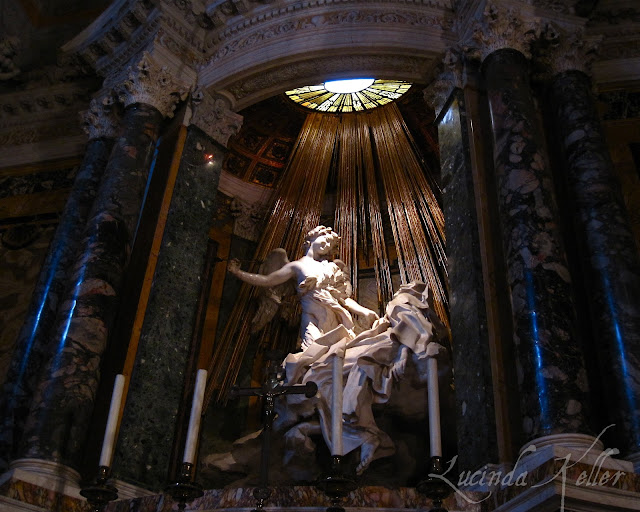 This was not my first visit to this church but, if you're in the neighborhood, how can you not pop in to see Gian Lorenzo Bernini's masterpiece in all its splendor and glory? In the photo above, you can see the window that Bernini designed, above the sculpture, to bring natural light onto the "rays of light" and his magnificent sculpture of Saint Theresa in Ecstasy.

Here, once again, pictured below, is the Baroque in all it's dramatic, Counter Reformation, glory. The ceiling fresco is The Virgin Mary Triumphing Over Heresy, by Giovanni Domenico Cerrini. 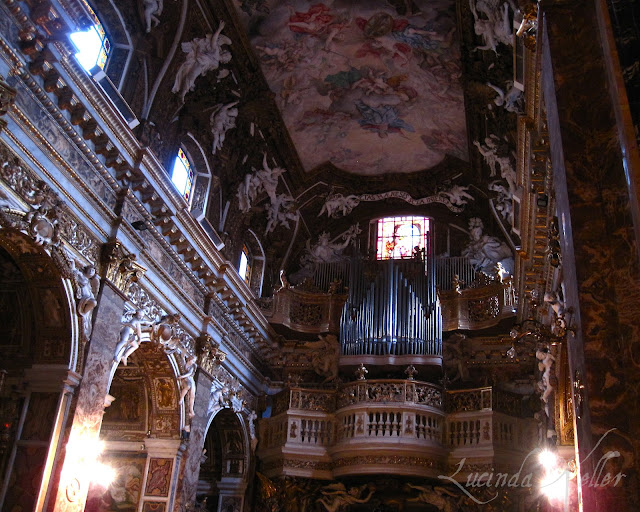 If you look at the façade of Santa Maria above (pictured 7 photos up, in the piazza to the left of the fountain) you can see the how similar it is to the façade of Santa Susanna, and see that influence I was talking about, that Maderno had on that period of architecture. 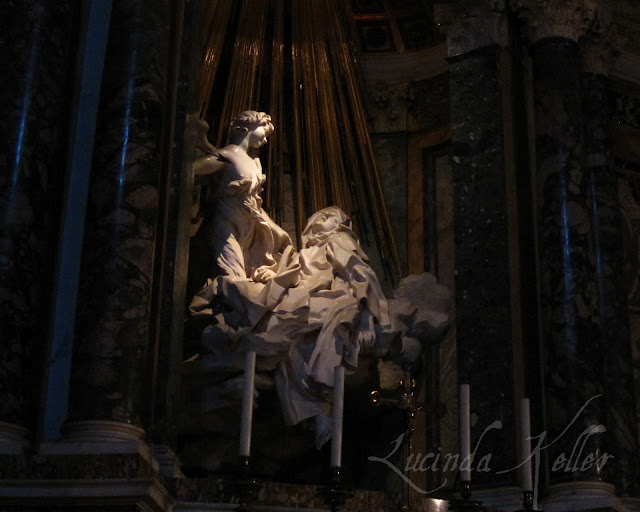 Saint Theresa, was born in 1515 Ávila, Crown of Castile, (now Spain) and became a Carmelite nun. In her autobiography, Saint Theresa of Avila described a vision she had of an angel piercing her heart with a golden spear.

She wrote,"I saw in his hand a long spear o gold, and at the point there seemed to be little fire. He appeared to me to be thrusting it at times into my heart, and to pierce my very entrails; when he drew it out, he seemed to draw them out also, and leave me all on fire with a great love of God. The pain was so great, that it made me moan; and yet so surpassing was the sweetness of the excessive pain, that I could not wish to be rid of it..."

Let nothing trouble you,
let nothing frighten you.
All things are passing;
God never changes.
Patience obtains all things.
~Saint Theresa of Avila 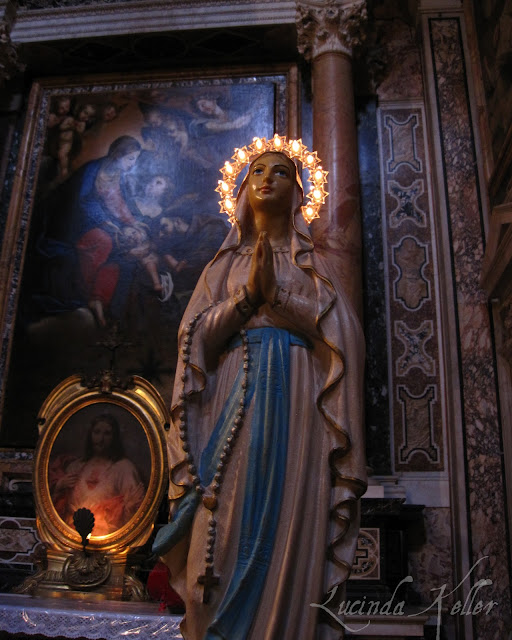 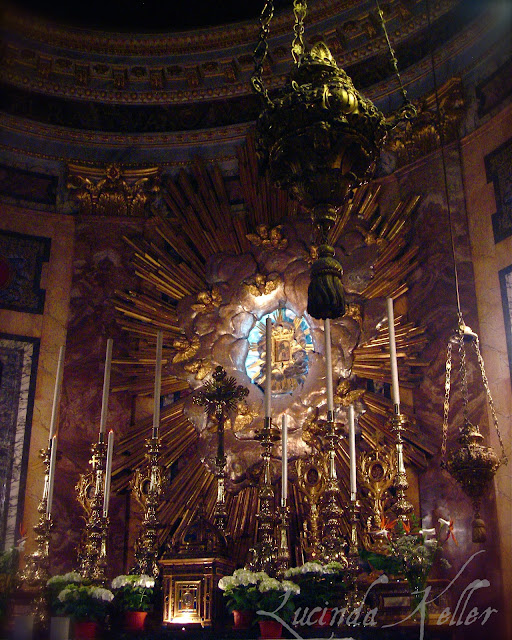 So here is "Master Shot" of the Cornaro Chapel. You can see on the right what looks like a balcony of four men. They are members of Cardinal Federico Cornar's family, the guy who commissioned the chapel. 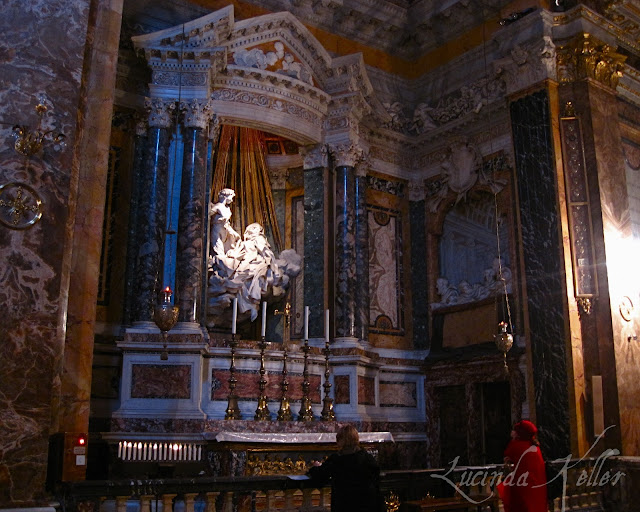 You pay God a compliment by asking great things of Him.
~Saint Theresa of Avila 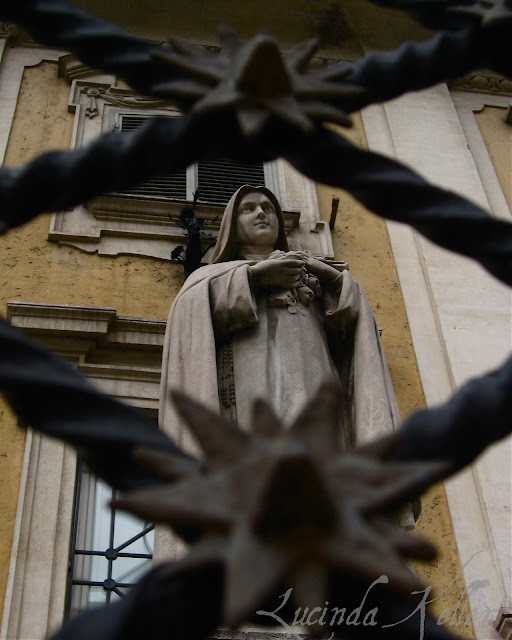 If you have the time, here is the entire "Power of Art" Episode about Bernini, and the Ecstasy of Saint Theresa, which is not only fascinating but has beautiful views of some of his unbelievable works.

Here are the official websites of the churches.
The Church of Santa Susanna
Santa Maria della Vittoria

So much to share and I will be posting more now that I am done with my two week housesitting stint. (My mom took her laptop with her to Mexico and my desktop is too big to move for two weeks!)

Believe it or not, except for the first "variety" post, these last 6 Rome posts have all taken place in the first 24 hours of my trip!!! The pace will be picking up, I swear.  ;)

It is love alone that gives worth to all things.
~Saint Theresa of Avila

There is so much beauty and splendour that it is hard to pick out a favourite but I have to say t hat the natural light shining on Bernini's St Theresa is an absolute masterpiece.

wonderful to see your photos of the gorgeous old world.

i took to hear ms. Avila's quotes, thank you.

“Travel is the only thing you buy that makes you richer.”

Lovely photos. I hope you enjoy/ed the rest of your trip.

FYI There is a LA sketchcrawl group. I suggest you join the forum at sketchcrawl.com
Next Worldwide SketchCrawldate is April 13th.

Whoa! If Moses was real, he'd be a giant! Maybe he's pointing to say "NO PARKING HERE!"
Love the sculpture with the beams of light...sigh, it's all too beautiful...thanks Lucinda.

Thanks for the comments!!! I love reading them.
And Kerry, that is hilarious. I think Moses really is commenting on the parking situation! An Sue I will definitely look into the sketch crawl!

If you want your ex-girlfriend or ex-boyfriend to come crawling back to you on their knees (no matter why you broke up) you need to watch this video
right away...

(VIDEO) Win your ex back with TEXT messages?

Get professional trading signals delivered to your mobile phone every day.

Start following our signals today & gain up to 270% a day.