I have already shared a night post, of the Festa, at Piazza Navona, as well as the Navona tango post, but I thought I'd include some of my daytime Festa shots, as well. As you can see, the weather was constantly changing, to the point that some of these photos look like they were taken on different days! 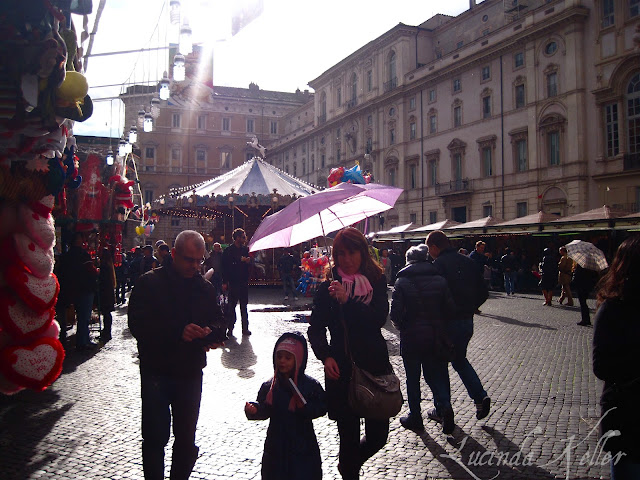 Here's some music by one of my favorite Italian composers, Nino Rota, who composed for Fellini's films. This is the theme to 8 1/2 played by Rota. 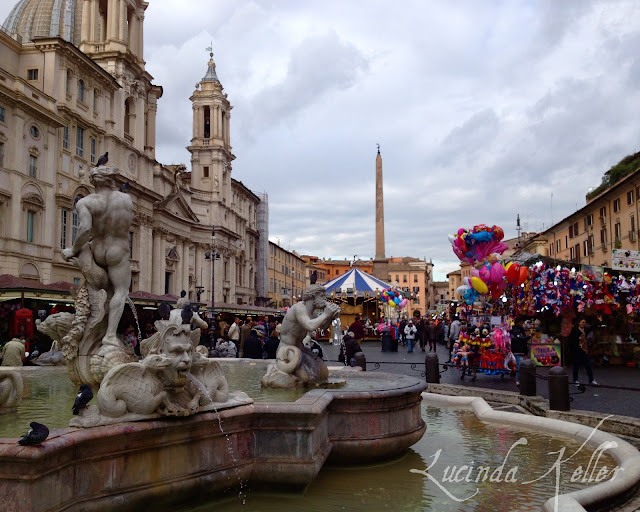 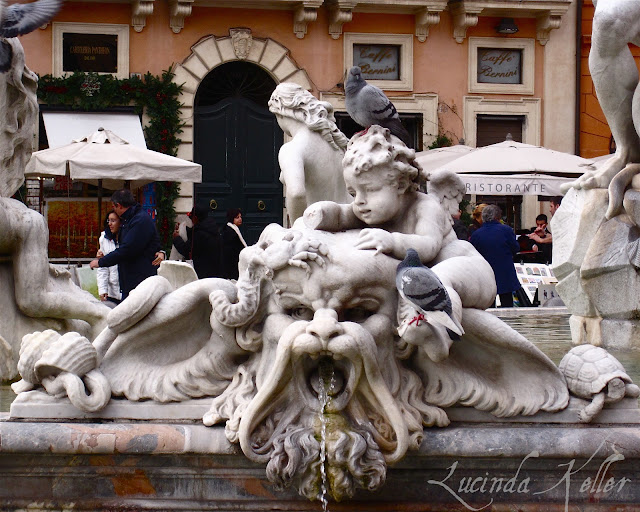 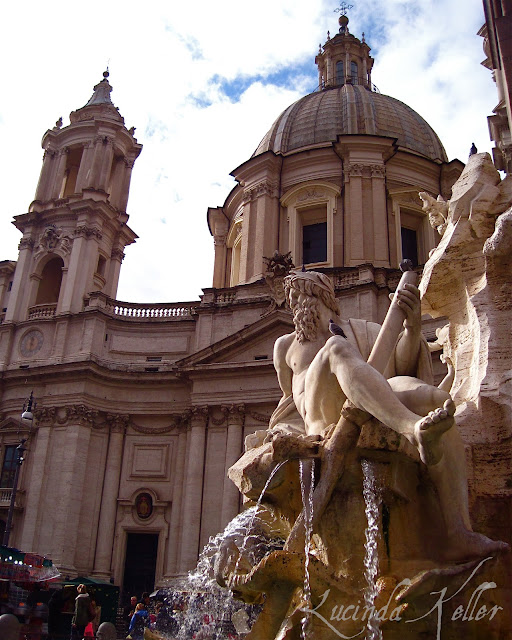 Sant'Agnese, below, seen with the carousel.

I didn't ride the carousel, but I did pop into Saint Agnes. There was a mass going on, so I didn't stay long. Unfortunately, for some reason, there are no cameras aloud in this particular church.

It is said, that this is the site of Saint Agnes' martyrdom. She was another virgin Christian martyr, killed by the Romans. This whole place was originally one big, Roman Amphitheatre.

Sant'Agnese consecrated in 1123 but was enlarged during the Baroque period, when the commission went to Borromini in 1653. Later, some changes were made by Bernini. These two guys, couldn't seem to stay out of each others hair! 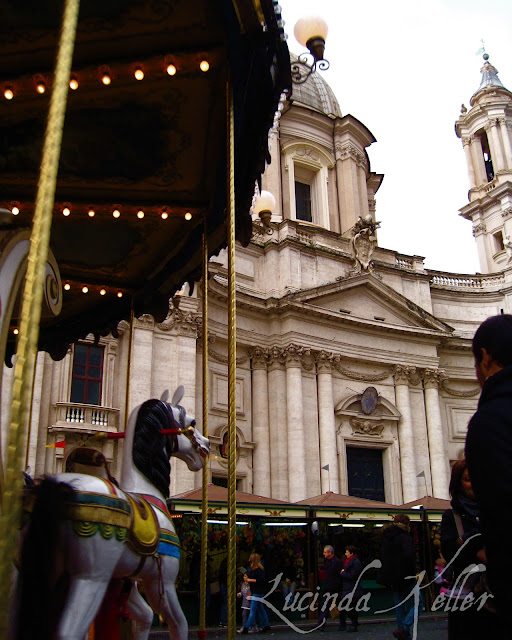 Fountain of the Four Rivers, with a performance artist, below. There are all kinds of artists in Piazza Navona. This one is a Egyptian sarcophagus and basically the idea is to stand perfectly still. 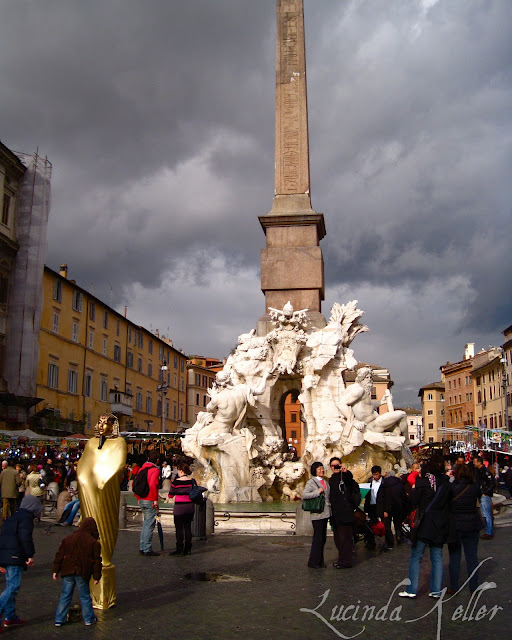 In better weather, when there is not a Christmas Festa going on, there are painters and sketch artists on the piazza. Musicians and dancers always seem to be around, at least until it starts raining. 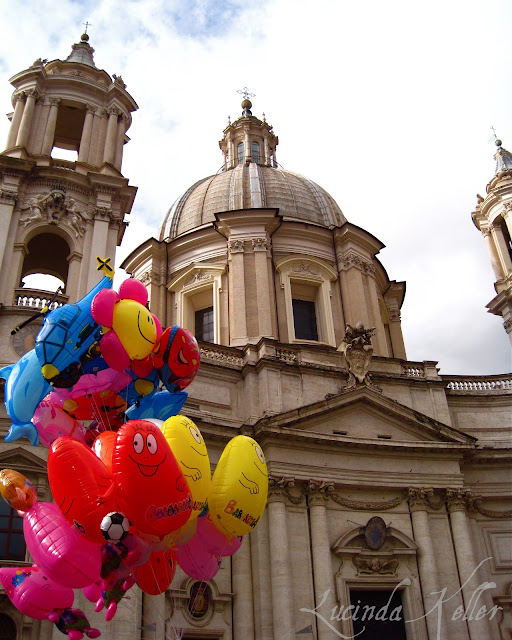 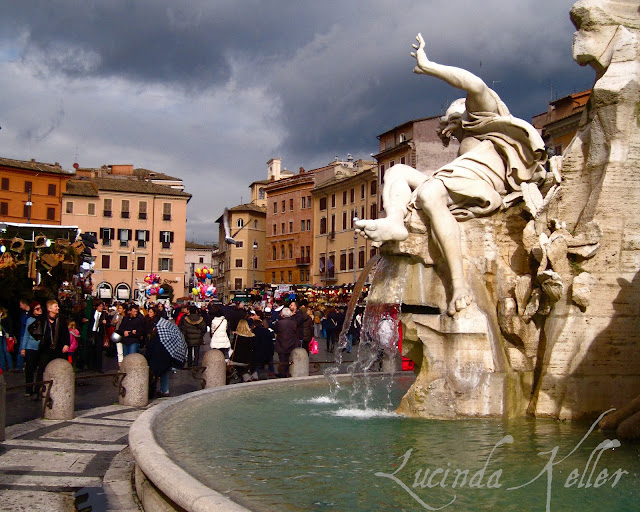 A moment of sun on the Fountain of the Four Rivers. I was just still so happy that it was not covered in scaffolding, as on my two previous visit! Yay! 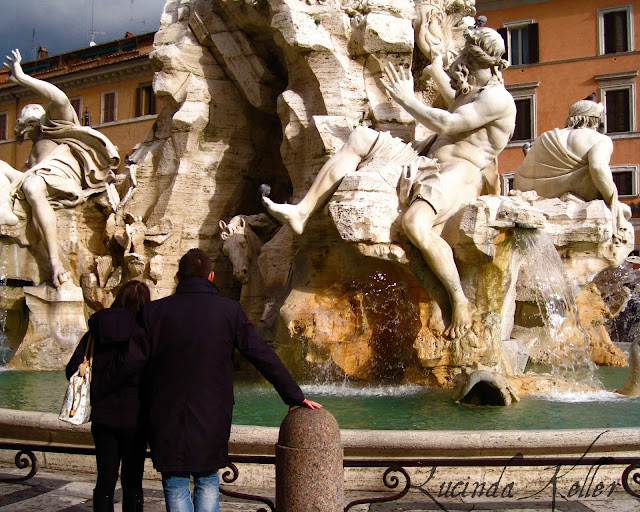 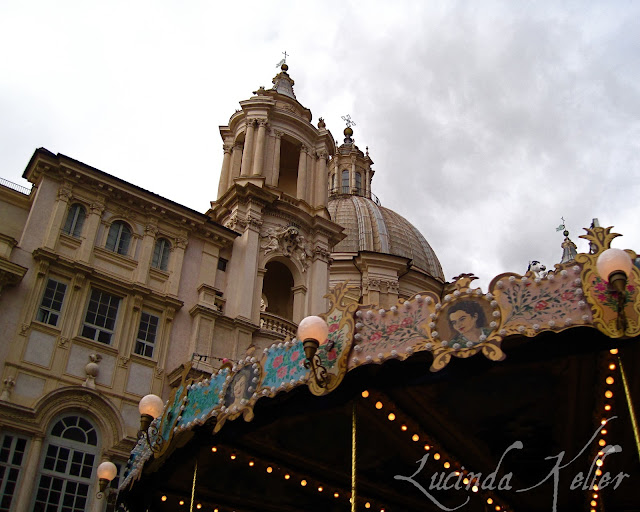 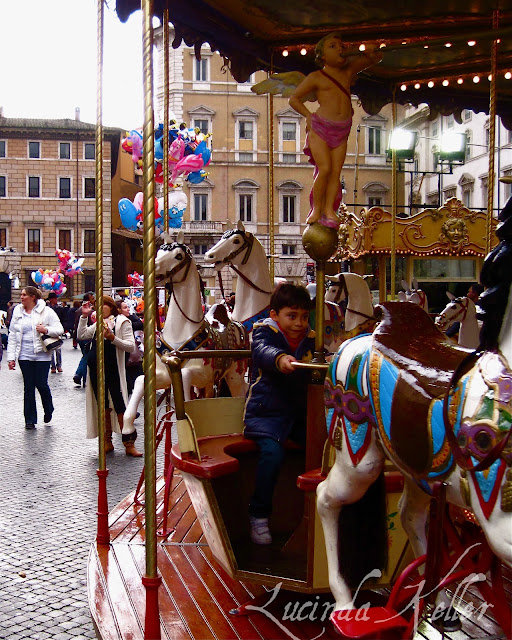 Here are some wonderful Befanas!


Befana shows up on the eve of Epiphany (jan 6) and brings goodies to well behaved Italian children and coal to the kids that have been naughty. Sound familiar? She carries a broom because she was, apparently, a very tidy woman. One night, 3 wise men showed up at her door asking for directions, while she was busy cleaning. The were looking for Baby Gesù. 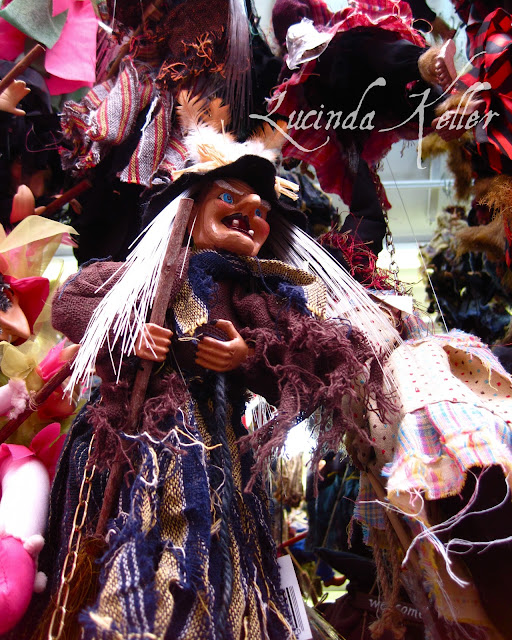 Now, Befana flies around, every year, looking for the baby Jesus, and that's when she drops off gifts. There are some sad versions of the tale, where the old woman is searching for the child, because she never had one of her own or had lost a child, and in some stories she actually thinks the baby Jesus is hers. (?) Very dramatic and very Italian.

Anyway, my nieces, parents, and my sister and brother in-law, all received versions of these wonderful little gals. Aren't they awesome? Had I not already purchased a bag o' Befana, the night before, I would have gotten the little gal in the middle. Isn't she great? They crack me up! 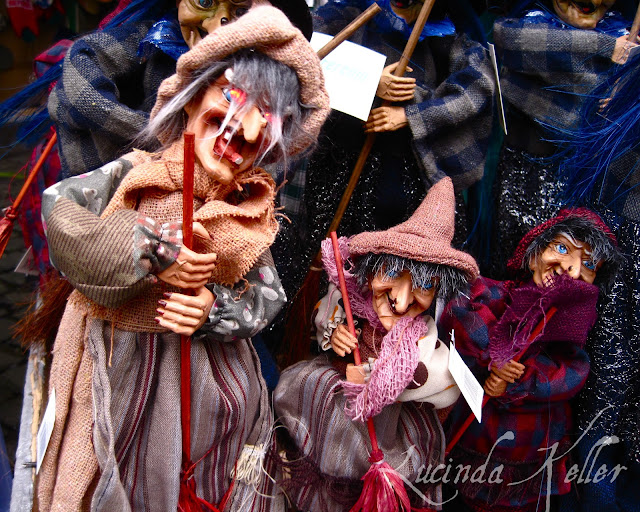 The church of San Luigi dei Francesi, is just a few steps North of Piazza Navona and I couldn't resist popping in to visit the 3 Caravaggios in the Contarelli Chapel. 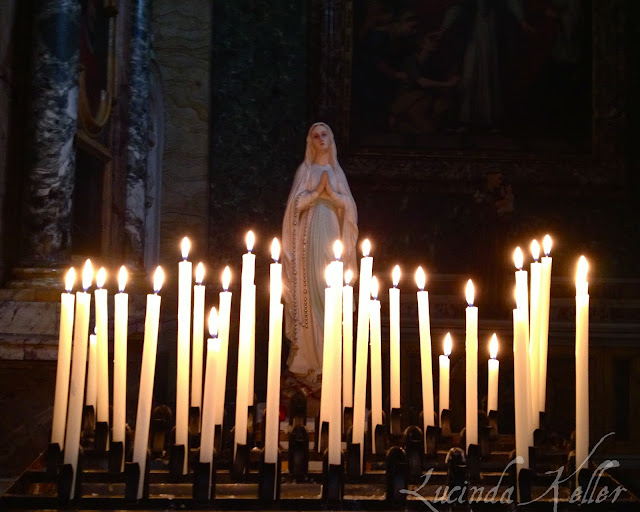 The ceiling fresco by Charles Joseph Natoire, depicts St. Louis. Natoire is known for his paintings at Versailles. 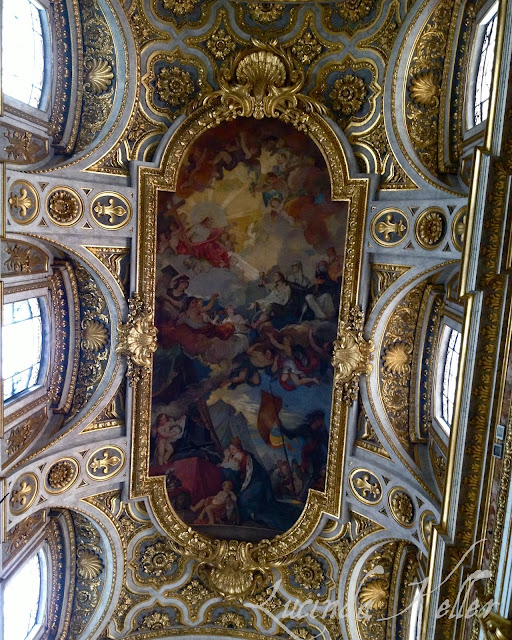 San Luigi is the church for the French Catholic community, in Rome. And, if memory serves, Catherine de Medici forked over the cash for the building of it. 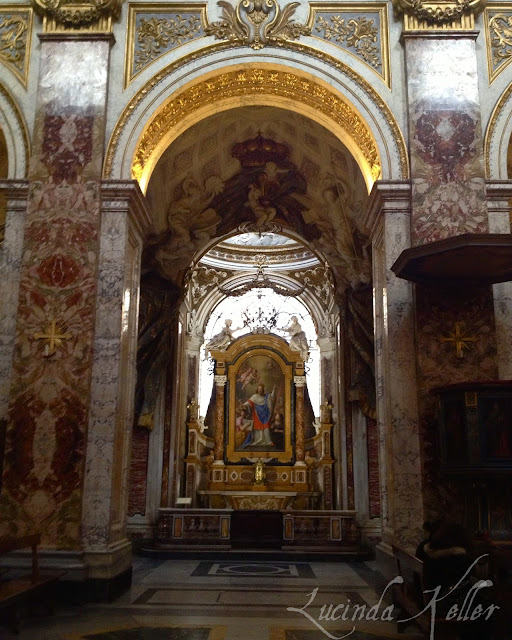 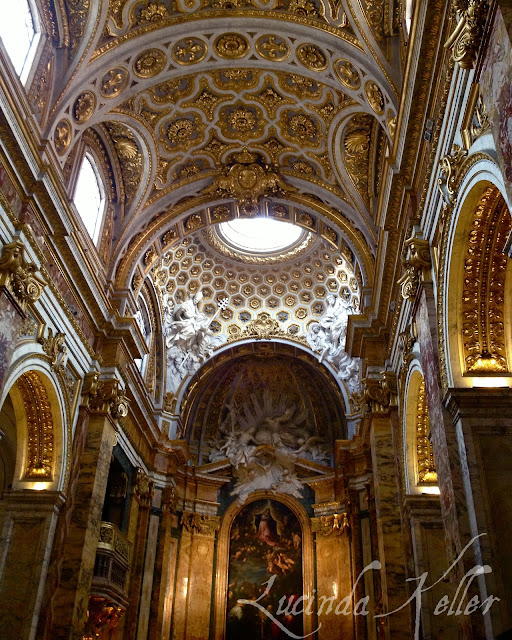 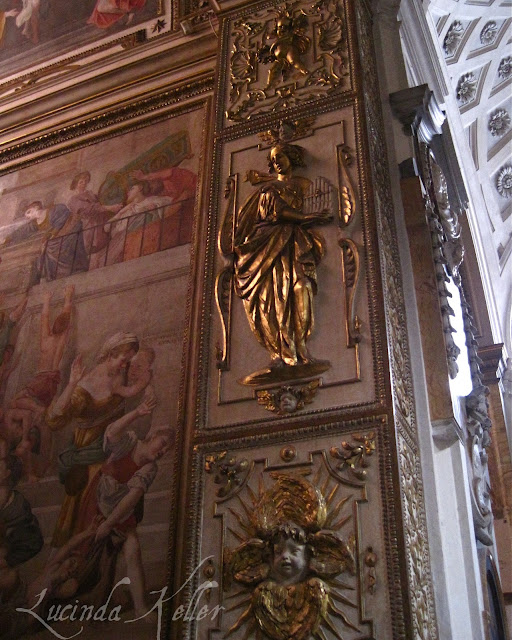 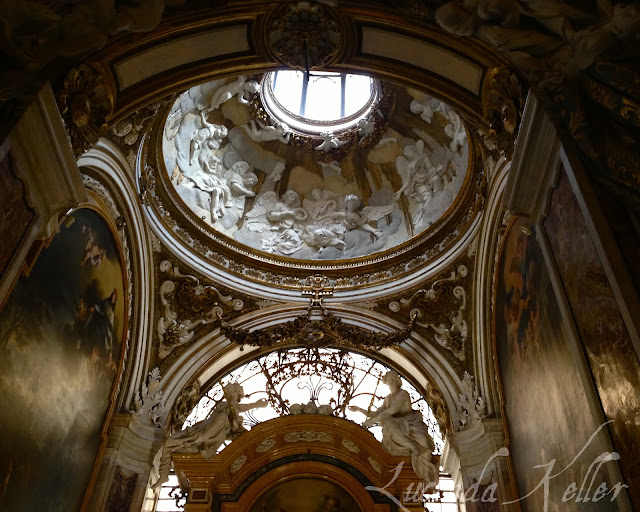 The painting in the middle, (below) is one of my all time favorite Caravaggios ... The Inspiration of Saint Matthew ... It's so gorgeous! click here for a clearer shot of it. 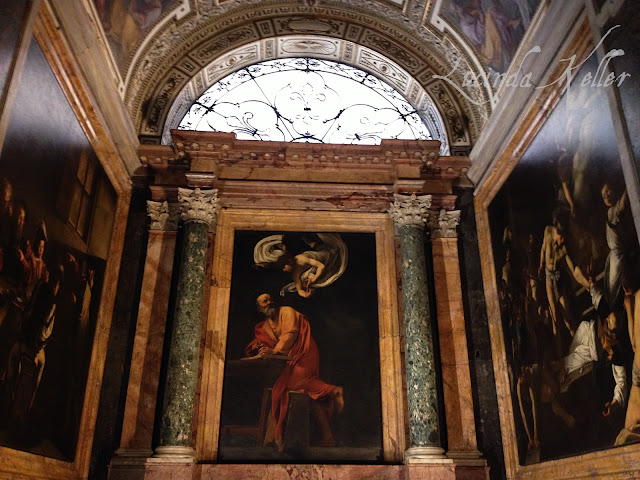 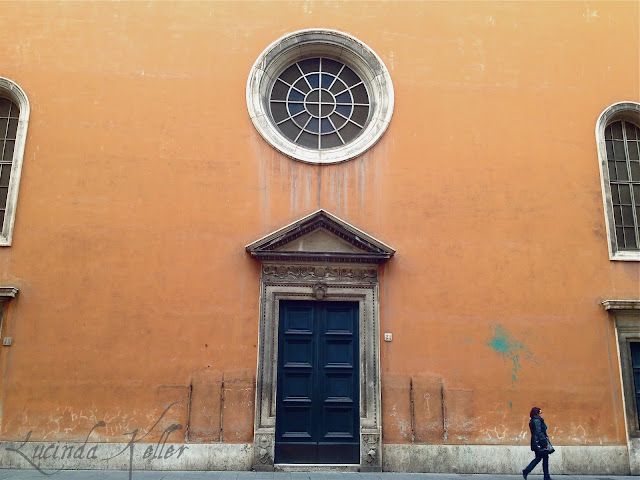 OK ... now it was time to find some lunch! Pizza perhaps?

When though art in Rome,
do as they do in Rome.
~Miguel de Cervantes

For more on the legend of BEFANA click here

For more info on Sant'Agnese in Agone click here and here.

there is such a richness and depth to your photographs. the image of the novena to the virgin is magical.

You have captured such beautiful images of the the piazza, the fountains, the carrousel, the ornate church, and magnificent paintings! Wow. What a treat. It's been many years since I was in Italy, and I have enjoyed your pictures and the accompanying narrative very much. I was not familiar with the Italian composer, but I really like the musical clip.

I'm LOVING that shot of the candles at that low angle with Mary for a backstop...I enjoyed the same places in Rome...2007. Would love to get back!

I loved Piazza Navona and next time, I will stay nearby. The scaffolding was up around St. Agnes. In Florence, two of the main attractions were closed for construction. Guess you have to keep going back to see all the sights.

So much magic in the air!!

Thanks for the sweet comments ladies! And thanks for coming by!! :)

Start following our signals right now and gain up to 270% per day.