New Mexico at Christmastime and the Loretto Chapel! 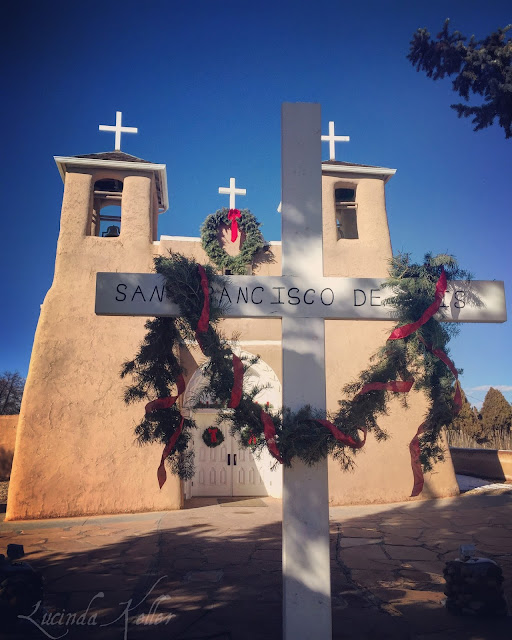 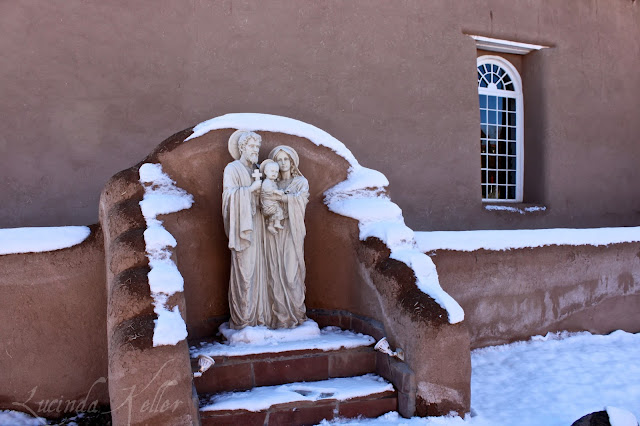 Weekend before last, my Mom, sister and I headed to Santa Fe for our first ever Mother Daughter trip! New Mexico was beautiful and I fell in love with Santa Fe and the little Mission Church in Rancho de Taos (seen in many photographs and painting by artists like Georgia O'Keeffe and Ansel Adams.)

There is so much to post about but since it's right before Christmas ... I thought I'd start with a Christmasy overview and the Loretto Chapel in Santa Fe which was so lovely, decorated for the holidays. 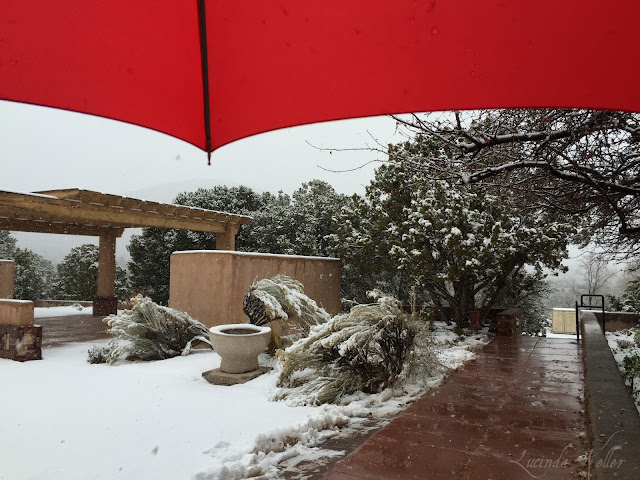 We arrived into Santa Fe on Friday evening, and Saturday late morning, we headed to the International Folk Art Museum and it started snowing! We were so excited, you'd think we'd never seen snow before! Living in Southern California we have snow in the local mountains but I rarely go up and there is just something so magical about it! 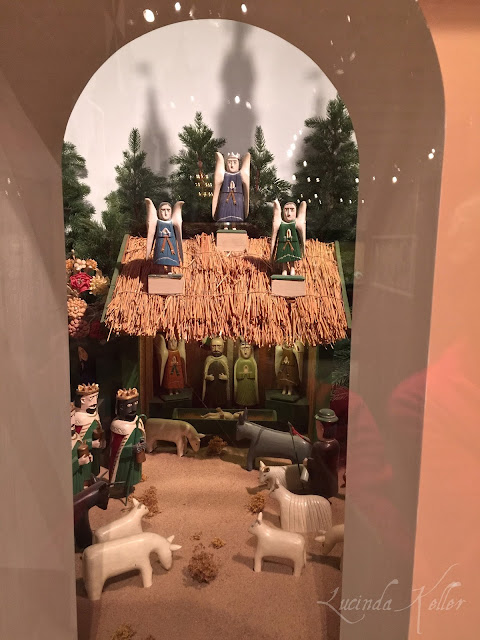 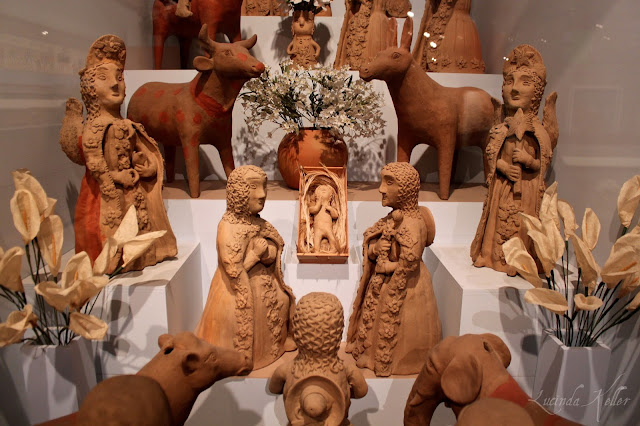 Mom outside the cafe on the Museum Hill ... 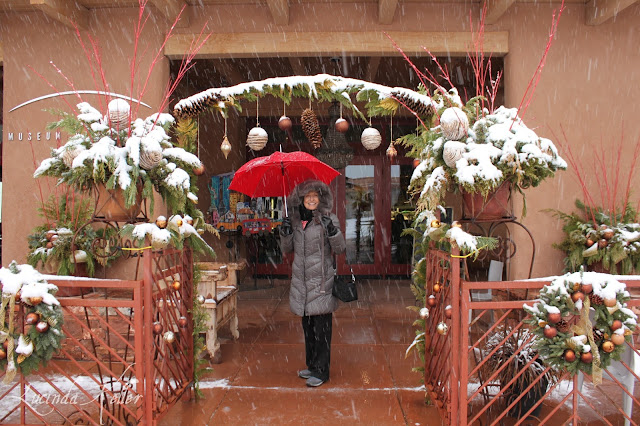 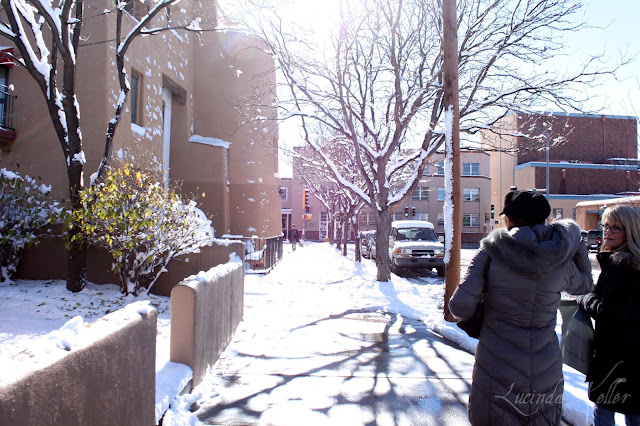 The next morning, the sun came out in Santa Fe and it was glorious! 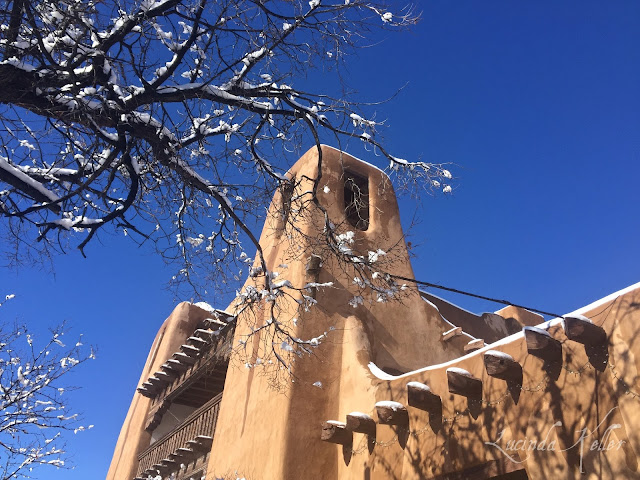 Above and below are pictures taken at the New Mexico Museum of Art ... 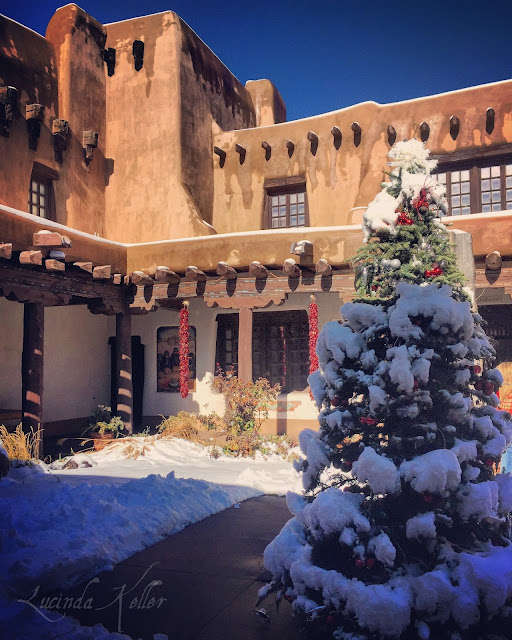 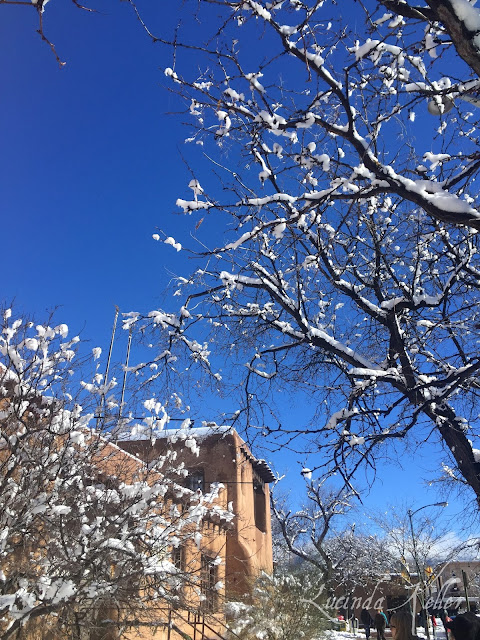 Walking near the main plaza ... 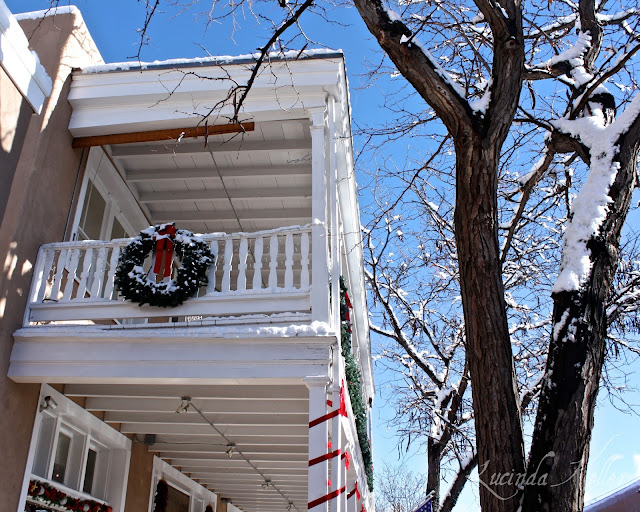 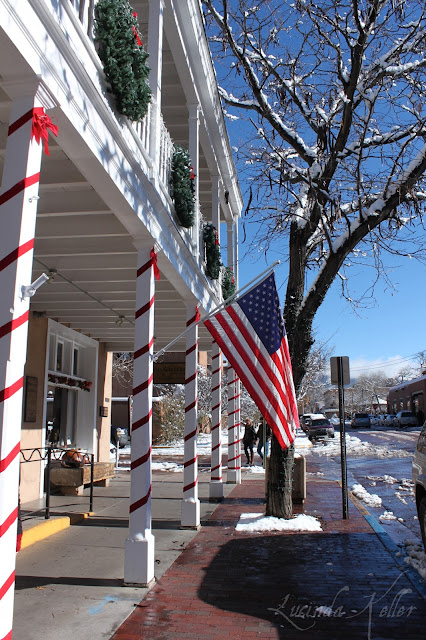 This cape, below, cracked me up. I joked that I could wear it with fishnets for Christmas! 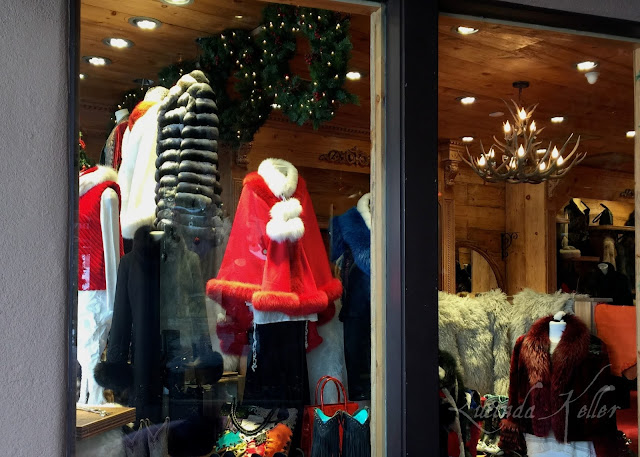 This, below, is one of the beautiful, famous, hotels in Santa Fe and we decided we'd have to go there and have a cocktail at some point. (We did.) Love the architecture and classy decorations ... 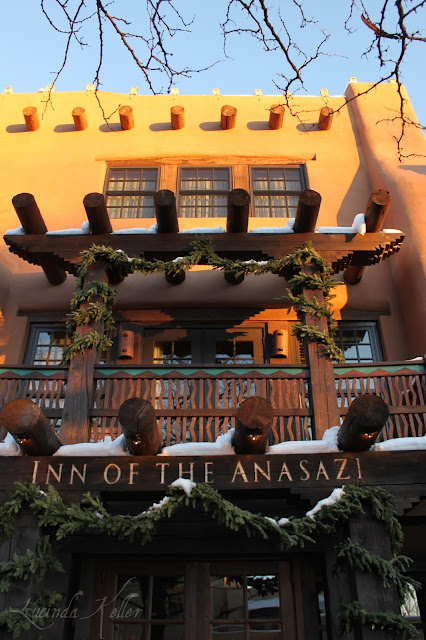 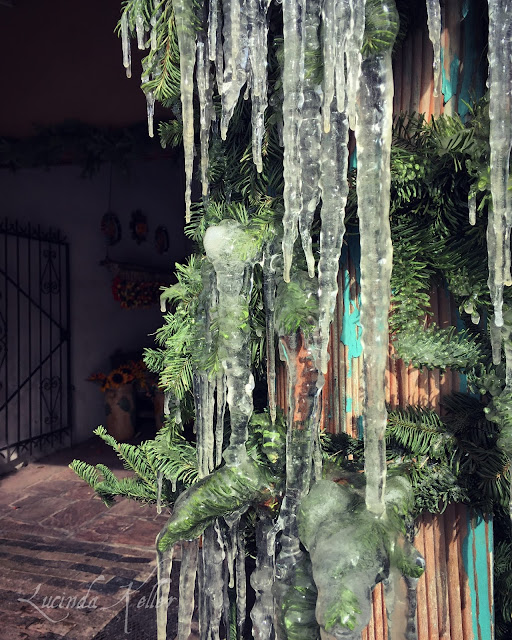 This, below, is in the little park area next to the basilica. It's hard to see but they've wrapped all the light posts, as well as the posts on the little buildings with Christmas greenery. So pretty! 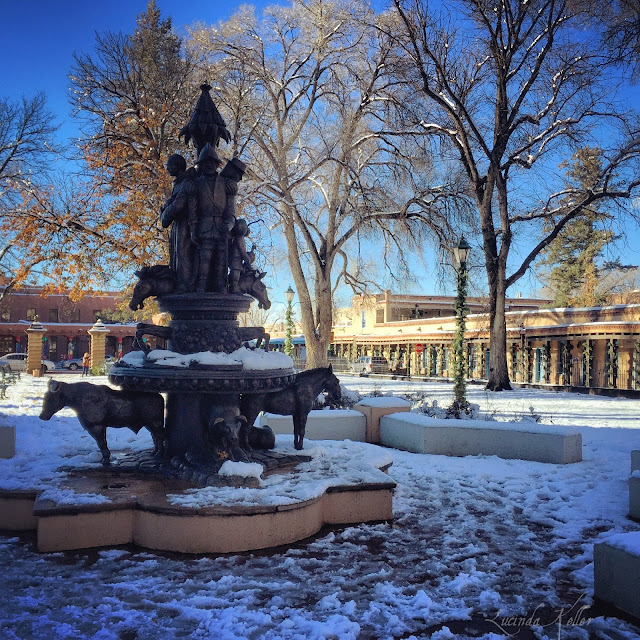 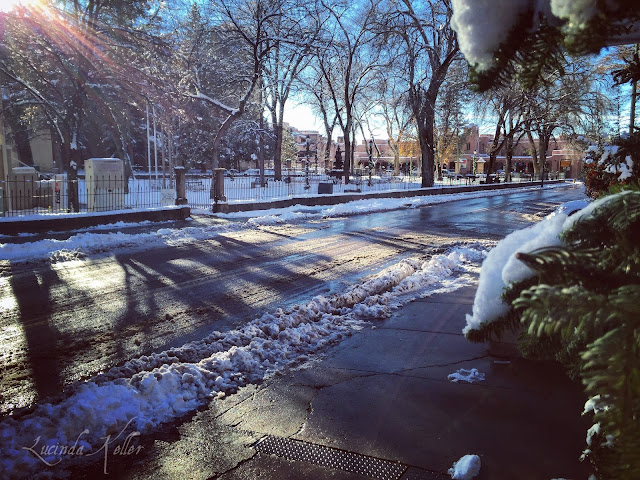 It really looked like someone and come along and dusted everything in white for the holidays! 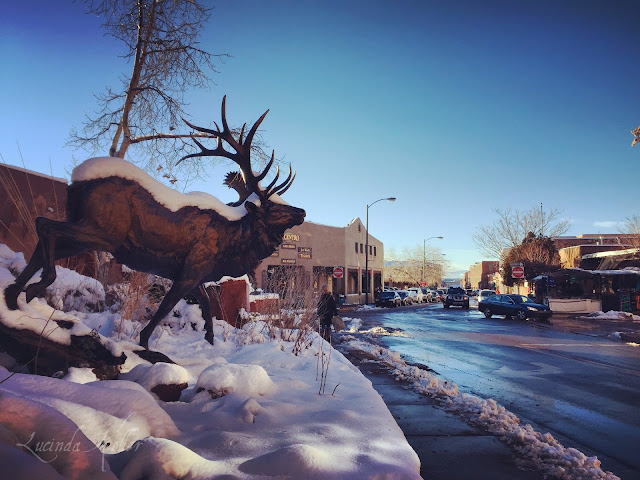 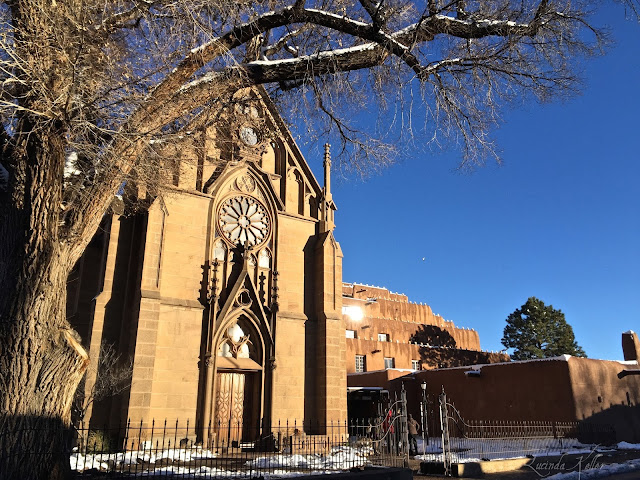 Below, the little tree outside the chapel where people have hung rosaries ... 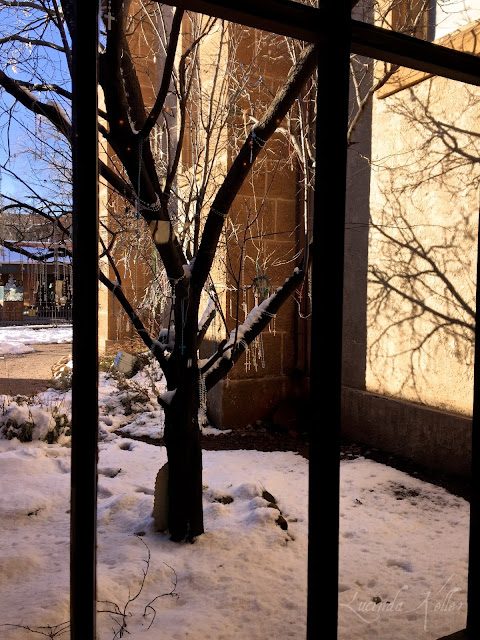 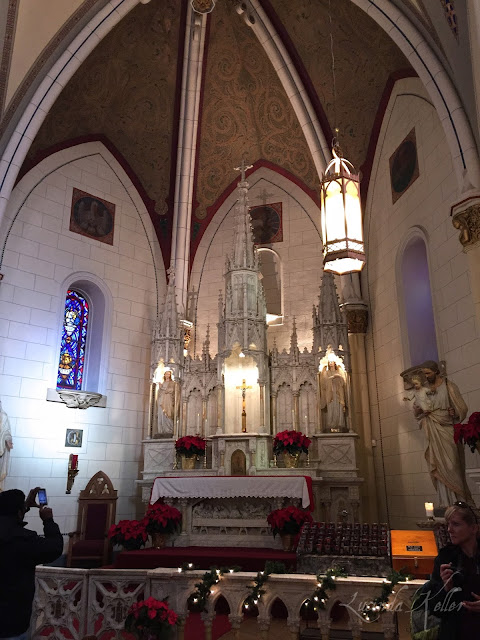 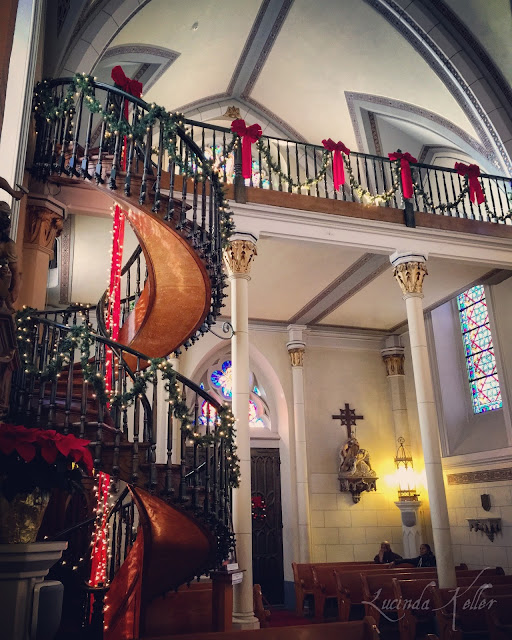 The reason most people visit the Loretto Chapel, is this staircase, which is referred to as "The Miraculous Staircase."

Two mysteries surround the spiral staircase in the Loretto Chapel: the identity of its builder and the physics of its construction.When the Loretto Chapel was completed in 1878, there was no way to access the choir loft twenty-two feet above. Carpenters were called in to address the problem, but they all concluded access to the loft would have to be via ladder as a staircase would interfere with the interior space of the small Chapel. 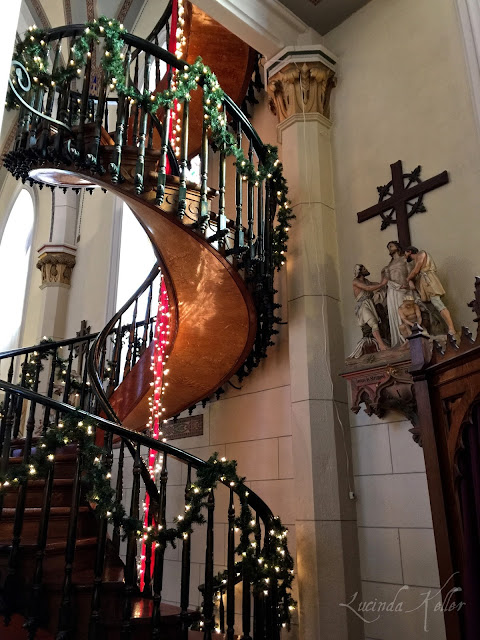 Legend says that to find a solution to the seating problem, the Sisters of the Chapel made a novena to St. Joseph, the patron saint of carpenters. On the ninth and final day of prayer, a man appeared at the Chapel with a donkey and a toolbox looking for work. Months later, the elegant circular staircase was completed, and the carpenter disappeared without pay or thanks. After searching for the man (an ad even ran in the local newspaper) and finding no trace of him, some concluded that he was St. Joseph himself, having come in answer to the sisters' prayers.

The stairway's carpenter, whoever he was, built a magnificent structure. The design was innovative for the time and some of the design considerations still perplex experts today. 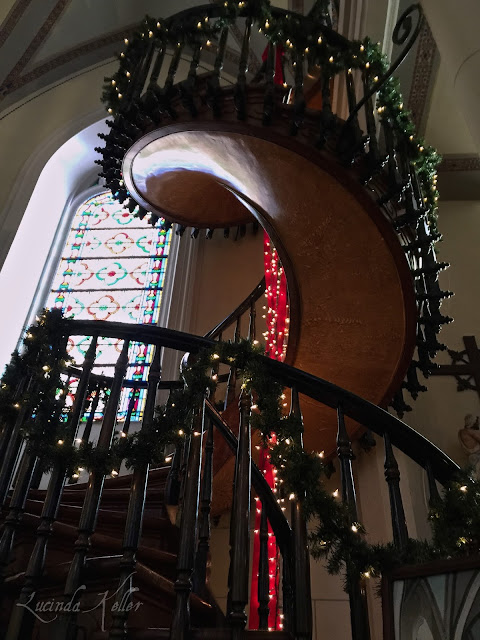 The staircase has two 360 degree turns and no visible means of support. Also, it is said that the staircase was built without nails—only wooden pegs. Questions also surround the number of stair risers relative to the height of the choir loft and about the types of wood and other materials used in the stairway's construction.Over the years many have flocked to the Loretto Chapel to see the Miraculous Staircase. The staircase has been the subject of many articles, TV specials, and movies including "Unsolved Mysteries" and the television movie titled "The Staircase." 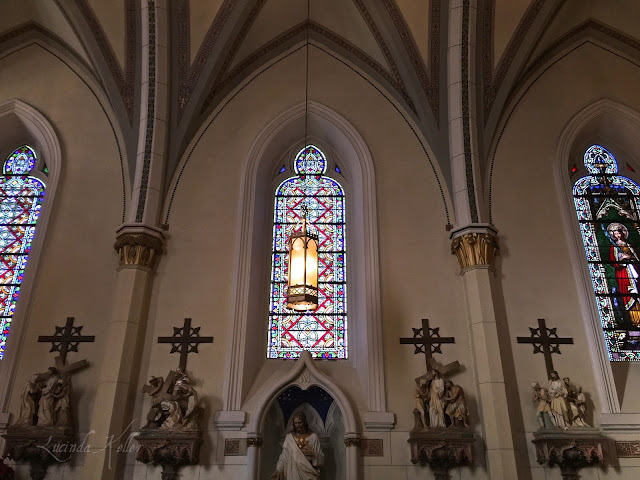 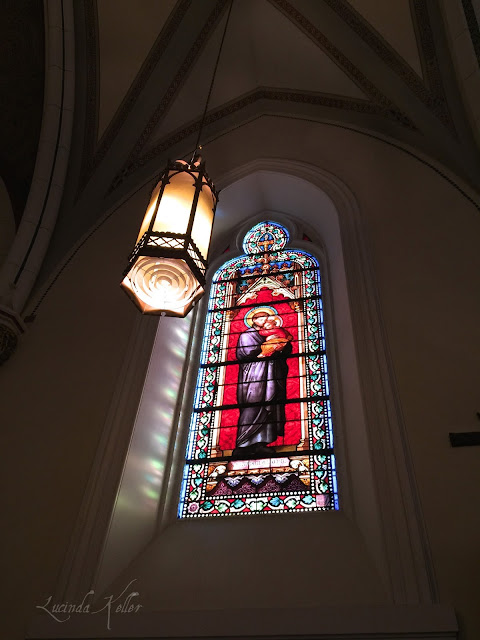 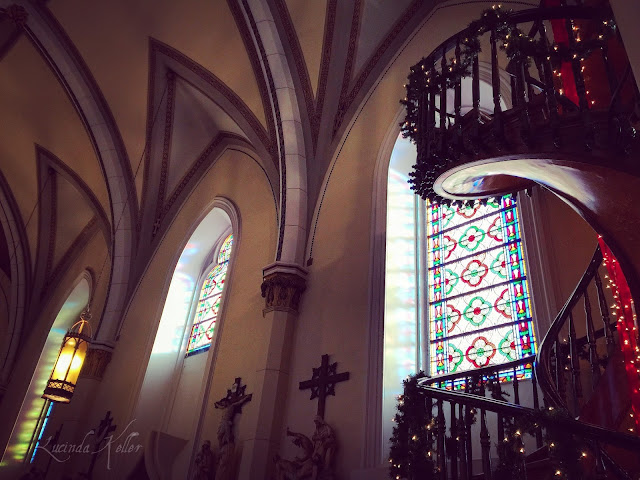 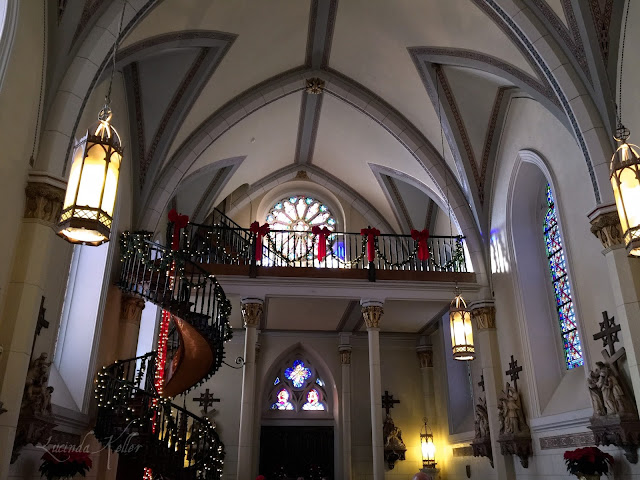 Needless to say, it was a magical time to be in Santa Fe! There is so much to show you but obviously I had to get to the charming "Christmas spirit photos" up first! I'm going to try to get the Christmas light/ Las Posadas (procession where Mary and Joseph look for an Inn) post up Christmas morning!

OH! I also wanted to share a clip from The Bells of Saint Mary's, which I watched the other night while addressing Christmas cards. I watch Going My Way pretty much every year in December, but somehow had never watched the follow up movie. Same central character of Father O'Malley played by Bing Crosby but this time he plays opposite the beautiful Ingrid Bergman who always looks like she glowing.

Anyway, I thought this Christmas play scene with tiny kids was so dang cute! It really does seem, in large part, to be improvised. Either way, it'll make you smile.

My idea of Christmas,
whether old-fashioned or modern,
is very simple: loving others.
~Bob Hope

Hope you are enjoying the holiday season!
Blessings and Light!

Merry Christmas, Lucinda! Lovely photos! The staircase is gorgeous. I'm glad you got to have a getaway with your mom and your sister.

Great photos, from my favorite city.
I love Santa Fe, especially at Christmas time,
especially in the snow.
I'm betting you smelled the incensey piñon wood
burning throughout town.
I spent years there, but haven't been back since
the 90s. You've hit all my favorite haunts.
Lucky you.
MERRY CHRISTMAS.

I can't believe that is snows in New Mexico. That's so cool. It would be nice if we got some sort of winter here. It is still so warm and it just won;t rain. Oh well ... it looks like it's going to be a warm winter everywhere this year. Best wishes for Christmas, Lucinda.

Lucinda, I saw you in your mother's smile. Have the best holidays.