Saint Cecilia, patron saint of music, had her home, in the third century, where her church now stands in Trastevere. She was definitely a popular Roman saint. We saw her in paintings all over the place playing musical instruments. You name it, she was playing it.
The church was first built from 817-824 and has a beautiful Byzantine Mosaic in it's apse. Mostly, I wanted to go there because I'd seen photos in guidebooks of a marble statue of her. Her body was apparently found incorrupt in 1599 and seen by the artist who sculpted her body. It sounds morbid and strange and I guess in a way it is, but it is also a really beautiful piece of art and something more... 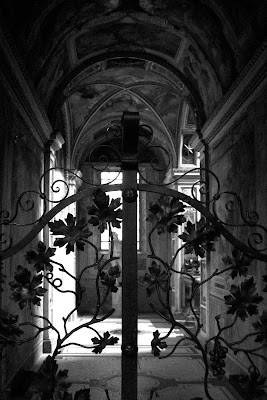 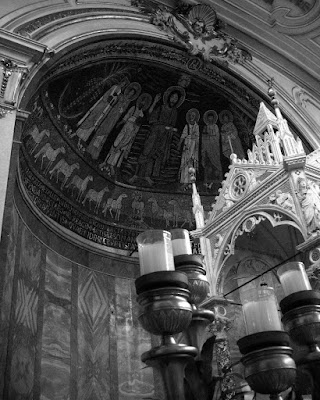 Sculptor Stefano Maderno's statement in inscribed on the marble below the statue ...
Behold the body of the most holy virgin Cecilia,
whom I myself saw lying incorrupt in the tomb.
I have in this marble expressed for you the same saint
in the very same posture. 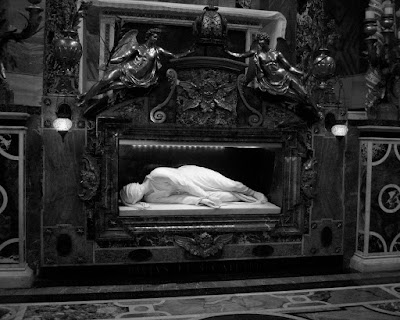 It is difficult to explain but when you walk to the altar of this quiet, out of the way church and see her ... it is so graceful and quiet and peaceful. 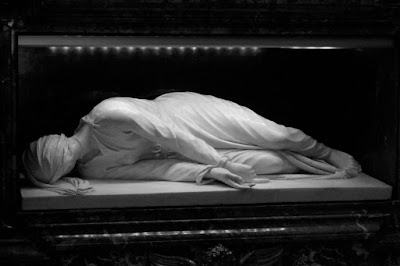 This sculpture wasn't just another statue of a saint, it became an experience that somehow connected you to her and her story. It felt like she was there in the room with us and I felt like we were truly with her. It was so moving and heartbreaking. I will never forget it.
What art has moved you?
What art has been transcendent?
Posted by Cobalt Violet at Saturday, May 22, 2010

Excuse my ignorance, but what does it mean 'incorrupt'? This is very moving...I can imagine what it was like to be in the same room. When I was in Spain we went to a mosque that had been taken over by the Christians and had a mass going on while we were walking around. The guard had let us in early before any other tourists thinking we were going to mass. The sound of the choir and the church within the mosque on a peaceful Sunday morning moved me to tears.

Hi Kerry! It's just a less morbid way of saying she hadn't decomposed after a couple hundred years.

They say that happens to Yogis ... their energy vibration is so high in life that it takes forever for their bodies to start ... well ... you get the idea. That has been said about other saints like Saint Claire of Assisi. Eventually it happened but when they opened her crypt in the 1800s she hadn't either. (which would have been 6 or 7 hundred years.) Of course, this is considered to be a miracle.

Cecelia is my mother's name.
And that sculpture of her is beyond words. Art that has moved me? The Pieta. And seeing it two years ago was a remarkable thrill for me. The mother holding her slain son tears the heart out of my chest every time I see it.

Another super-gorgeous post..I have always loved Cecelia as well... thanks for sharing this journey. Your photos are beautiful.
Have a sparkling day!
Kiki~

The sculpture is hauntingly beautiful...like so many others in Italy. Beautiful photos!

Thanks for the 'death' lesson...I never knew that! See? I learn something new everyday here on blogger...cheers!

Thanks for your visit! I can see you enjoyed your stay in Rome too (so many things to see).
I really love that first picture.