Eremo delle Carceri is one of my favorite places to visit in Assisi. (Along with San Damiano,) It isn't actually right in town, as you might have gathered. It's up on the side of a mountain, like the sanctuaries I visited in The Rieti Valley. You can walk up from Assisi, people do, but it's a hike. 4 km up a steep road. Seems longer. I however, took a cab on my first trip almost two years ago. I was by myself and had a lot to see. And plus I figured a) I was out of shape and b) I didn't have the time.

This last trip in May, I took my parents. It was another beautiful, chilly day at the hermitage. This time our friend Ted drove us. We'd met Ted and his wife Lyn through Anne Robichaud, our guide in Spello and had been having a great time with them hanging in the "Taverna" set up for the Calendimaggio festival. Ted offered to take us up in his car to Carceri. He and his wife (who are from Australia) were spending several months in Italy, mostly in Umbria.

These photos are a mix of my two trips to Carceri. It is peaceful and lush like the other sanctuaries but this is the one I saw first and it holds a special place in my heart. 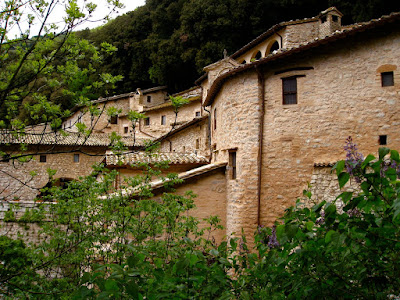 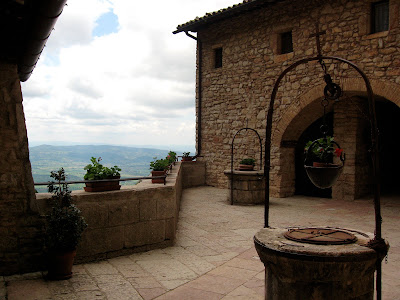 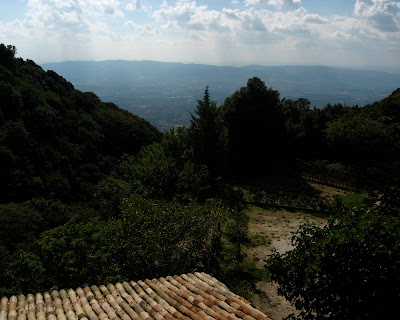 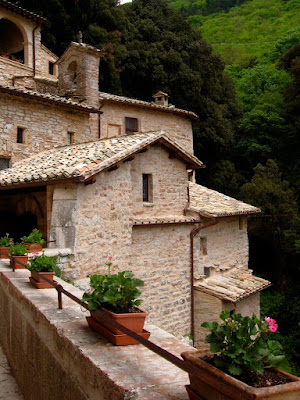 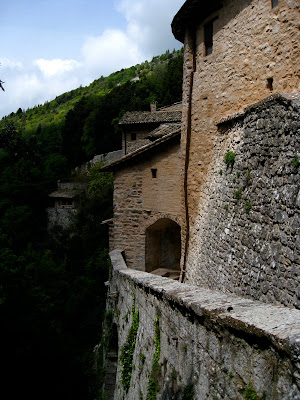 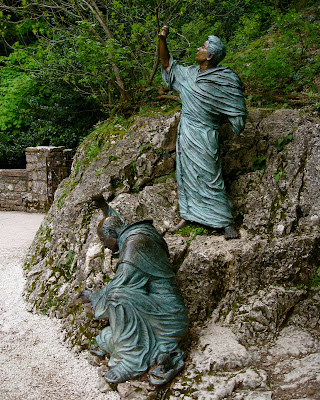 There are many small gathering places, altars and chapels where people still pray today under the trees, while hearing the birds and leaves rustle overhead. Many pilgrims make crosses of twigs and leave them in prayer and offering along with rosaries and photos and notes. It is monastery today and there are a few friars who live in this beautiful place. 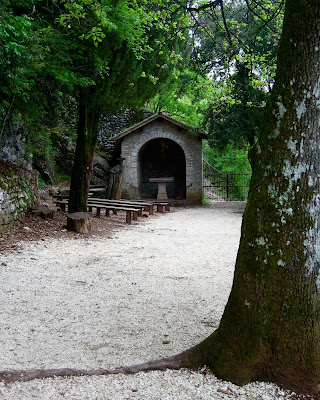 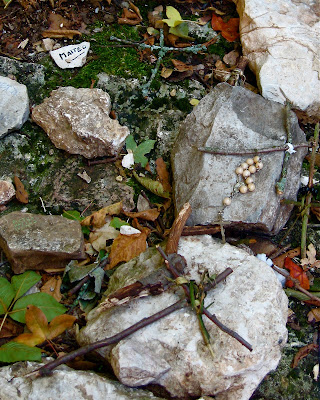 On my first trip two years ago, I saw the cave or "grotto" of brother Ruffino and I was shocked by the tiny, cold, stone crevice, only large enough to slide into on your belly. This is looking from the point of view of the cave.

That first time, I was on a mission to see everything ... so much so that I wasn't taking my time ... taking in the moment. I mean, I was taking in the beauty and everything but I was busy looking for caves, taking pictures, hoping it wouldn't rain and wondering how I would get down the hill since I told the taxi not to wait. Busy, busy mind. 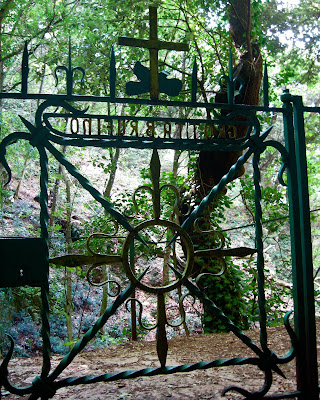 Ruffino had been a nobleman, Saint Claire's cousin and "the shy one." He was one of the first 12 brothers to join Francis and was close to him until he died. He is buried in the Basilica in Assisi along with Leone, Masseo, and Angelo around the tomb of St. Francis. This moves me to tears at the very thought. Being there, it's hard to hold it together. 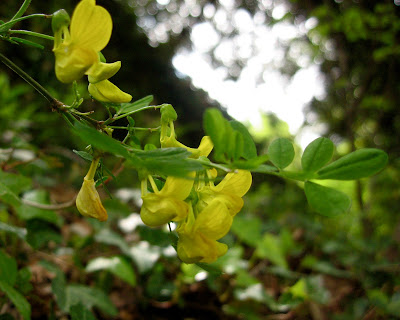 Then I explored the beautiful pathways ... (all the while taking photos ... lots to do!) 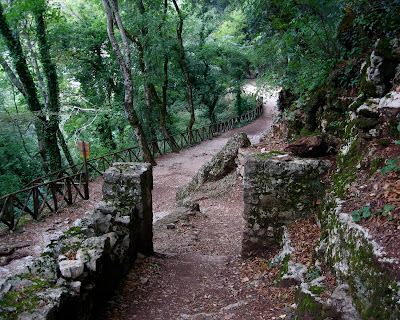 And the cave of Brother Leone, Francis' confessor,
who I also mentioned above, was with St. Francis at Fonte Columbo
and was the brother to whom Francis dictated his "Rule." 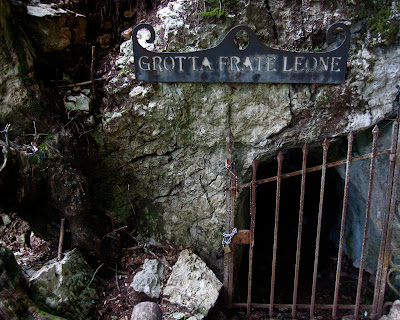 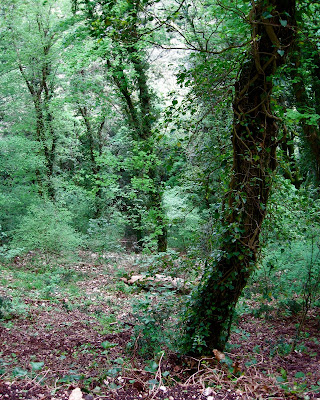 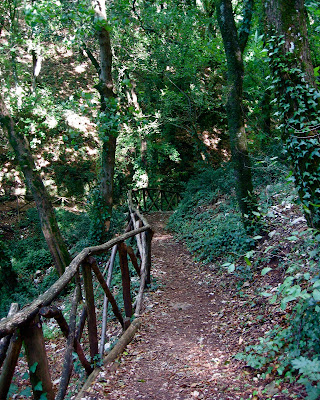 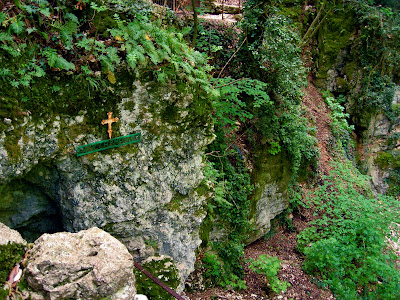 I found ...
the cave of brother Masseo. 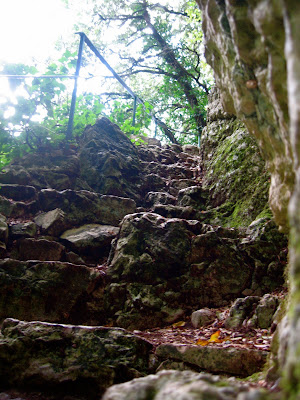 Down the stone steps I went.
It was like finding a hidden treasure ... 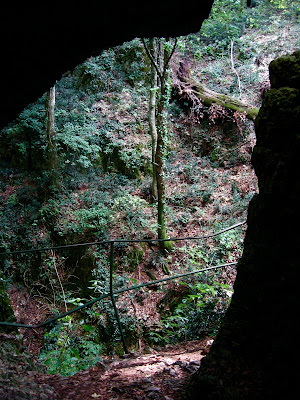 I crawled in and I sat.
I looked out, where he had looked
and I sat.

I breathed.
I prayed.
And then I sat for a long time
closing my eyes,
listening,
looking up 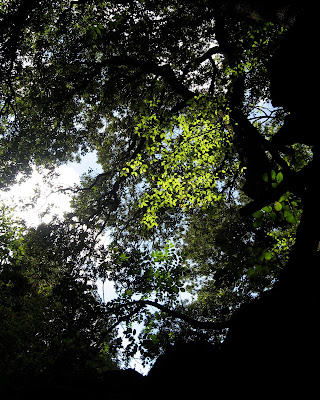 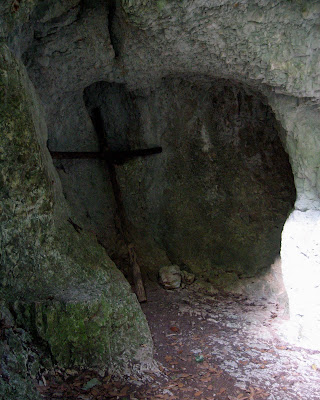 And then I sketched. I wanted to take in and remember every detail.

I know it sounds like "doing" but I realized how different it is for me photographing something, than taking the time to sketch. I found that it made me even more present and in the moment. I took time and it was the most "in the moment" I'd felt since I'd arrived on that first trip. It was a beautiful time and was truly a gift ... "being" and really seeing this place and something about my self. 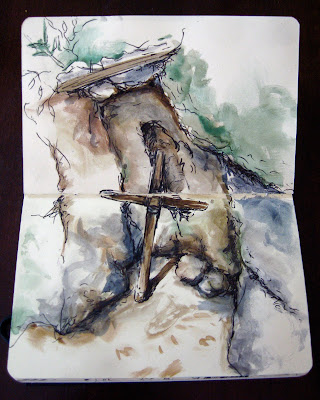 So you see why it became one of my favorite places.
It was a gift. 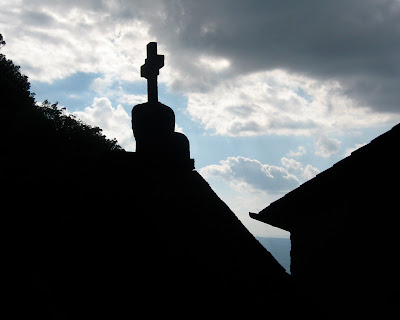 I love the buildings. What a beautiful place. Thanks for sharing.

Assisi really is so beautiful--every turn is a new surprise. Lovely!

What a beautiful, contemplative place. Your sketch is exquisite.

So wonderful and beautiful. I am longing to go to Umbria. It looks like magical things can happen there. I can understand your need to sketch. It must be an awesome place to visit and walk the paths that Francis walked.

it really is a special place ..beautiful sketch ..so right re "being" ... i'd like to go back there ..enjoy the rest of your trip

Waht a moving experience, i can understand why taking the time to sketch what you saw would give you the sense of a much deeper feeling.

This is a lovely story path you have led us on...

Last February I visited the Carceri for the second time. (The first time was almost 40 years ago.)
I found the cave of Brother Masseo, walking down the icy path. I walked in and stood at the back of the cave. Looking out at the snow outside, I experienced such a deep peace.
That cave is a holy place, a "thin place."