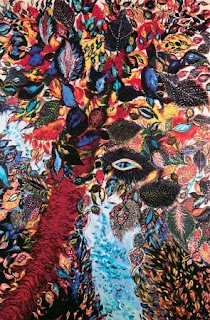 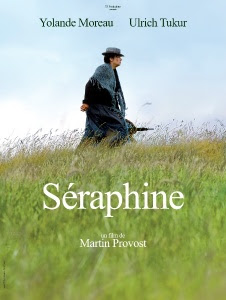 I guess I am a bit late to the party on this one, as it came out in 2008! I'd never heard of it until I went on Mary Ann Moss' very creative blog, Dispatch From L.A.! Thanks Mary Ann!
I love films about artists. They don't even have to be "great" films for me to like them! (I am pretty picky about everything else!) They can just be so-so and I will be intrigued and often inspired by them.
Last night I saw Séraphine, about French artist Seraphine Louis (also known as Seraphine de Senlis.) Happily it was far beyond "so-so." It was a lovely and moving film with wonderful actors and was beautifully photographed. I like movies directed with a bit of restraint as well. So much was understated and it was nice not seeing some gorgeous famous actress dressed down for the role. Yolande Moreau gave a touching, believable performance and it's difficult imagining anyone else in the role.
I highly recommend renting it if you are like me and missed it! I also enjoyed the special features including a slideshow of the artists work which was mostly from the 1920s.
While we are on the subject of talented, unbalanced, female, French artists ...
This was one of my first foreign films and blew my mind way back in 1998. Isabella Adjani was so amazing as Camille Claudel, I couldn't decide if it made me want to act or sculpt! I did both for while until I went with acting. (For a long time anyway.) I haven't seen it in many years but I suspect it holds up and if you are an artist you can't go wrong with a biopic about Camille Claudel and Auguste Rodin.
Of course, I can't help myself. I love a biopic!
I have seen Pollack, Frida and the semi-biographical one about Modigliani with Andy Garcia ... any other suggestions?
Posted by Cobalt Violet at Monday, August 02, 2010

I loved the movies you mentioned but hadn't seen nor heard of Séraphine.

I'll definitely watch out!
My husband and I wonder why there is no movie yet about the heroes of modern art -- Kandinsky, Klee, Jawlensky, Muenter -- and about Hilla von Rebay who initiated the Guggenheim museum. We read the book, and it was so exiting!

Thank you for telling us about these films. We're on vacation this month and it's still too hot to do much outside after 9:00 a.m. Rent movies! Hooray!

oh that looks soooo good, thanks for the recommendation. i so love movies about artists too! "Camille Claudel" is one of my favorites for sure, and "Pollack" is fantastic. you might like "Vincent and Theo" (about the tormented Van Gogh brothers) or "Stealing Beauty" (set in an artist commune in Italy, the scenery is gorgeous) and "Sirens" ( a preacher and his wife visit an artist's home...) my all time favorite movie (although not about an artist) is "Out of Africa". there is something about that movie that makes me enjoy it more and more each time. thanks for visiting my blog today...glad you like the music!

Wow--I never heard of Seraphine--thanks so much for the heads up--the trailer looks amazing. I'm with you--I love movies like this. I did see Camille Claudel and sobbed--it was so sad and moving, and so well done. I know there are probably more similar films I've seen--I'll have to think about it, but I'm putting the Seraphine on our netflix queue--thank you!

I want to see this. When I return home I am going to paint again I have decided.

thank you for your recommendations, I look forward to renting and watching these films.

Well I know what I'm renting next...Seraphine looks wonderful. Have you seen 'The girl with the pearl ear ring'? Or the movie based on Beatrix Potter? Another good one about Van Gogh is called 'Theo and Me'...thanks for the tip.

Looks intriguing, I'll see if it's on netflix. There was one made with Jeffrey Wright in the lead about Basquiat ten years ago, it was pretty good.