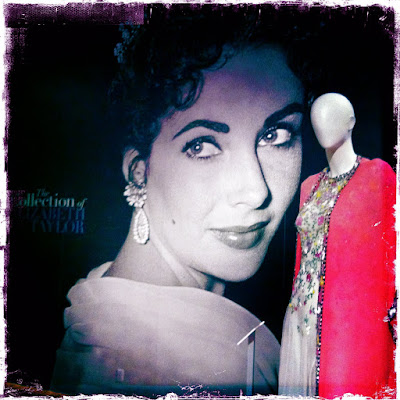 I've always admitted that I'm ruled by my passions.
~Elizabeth Taylor
I heard some time ago, that at some point Christie's would be touring some of Elizabeth Taylor's collection of art, jewelry and costumes before auctioning them off for charity. I must say I was hoping to see her incredible collection of paintings (her father was an art dealer so she knew her stuff) but for the most part, what came to Los Angeles last weekend was a pretty amazing sampling of her jewelry and clothing.
Here is a sampling from the exhibit which they held at MOCA at the Pacific Design Center last weekend ... 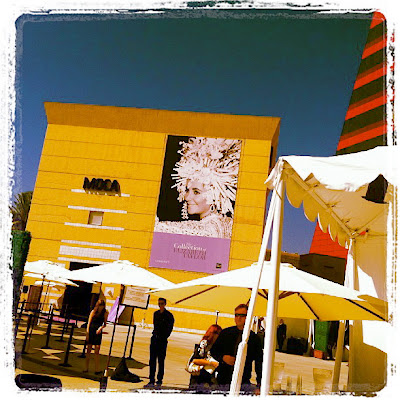 Up the stairway to the exhibit, photos of Elizabeth in all her gorgeous glory ... 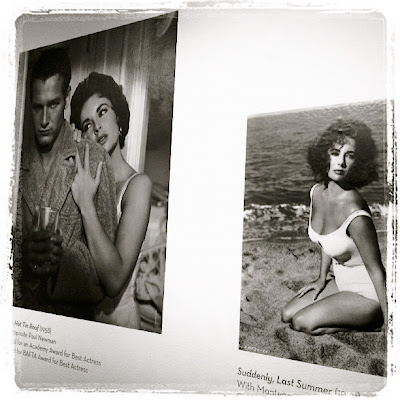 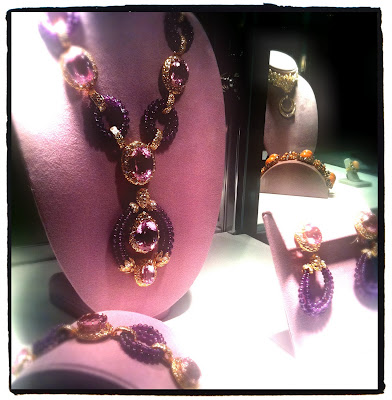 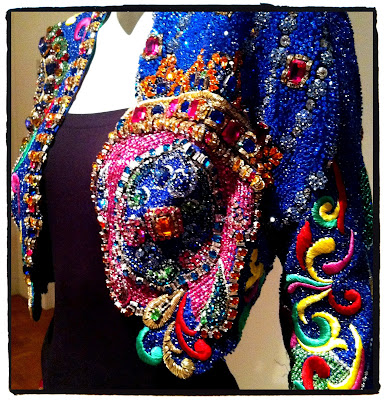 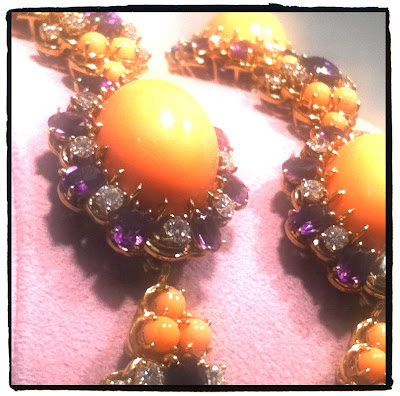 The Taj Mahal Diamond (circa 1627-1628.)
This, below, was by far my favorite piece in the exhibition, partly because of it's romantic history. It belonged to Emperor Shah Jahangir, who had the heart shaped diamond inscribed with his wife's name "Nur Jahan." He passed the stone on to his son, Shah Jahan. He was the one who built the Taj Mahal in memory of his wife Mumtaz, who died in childbirth. It's incredibly beautiful and so unique, and Cartier made the gold and ruby cord replacing and replicating the original silk one it was on. It was given to Elizabeth by Richard Burton for her 40th birthday.
I adore wearing gems, but not because they are mine.
You can't possess radiance, you can only admire it.
~Elizabeth Taylor 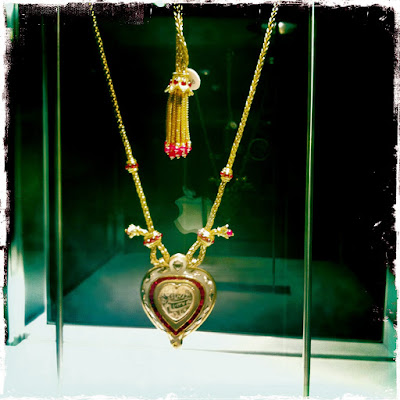 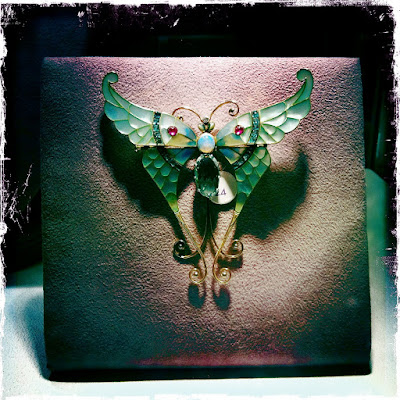 And I thought my charm bracelet was heavy! These were incredible and the charms were huge! 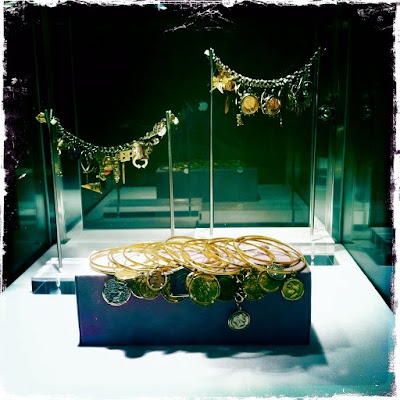 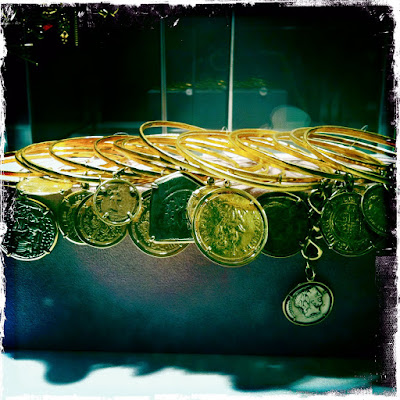 Her Oscar for Butterfield 8, borrowed for the exhibition. (It's against the rules to hawk your Oscar!)
She called it her sympathy Oscar because she won it after almost dying in the hospital. 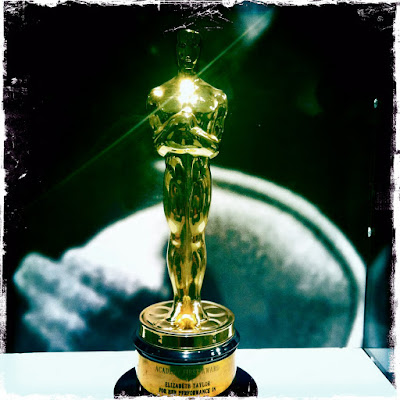 Chiffon Chanel ball gown and cape she wore at the Royal Film Performance of Taming of the Shrew with Richard Burton ... 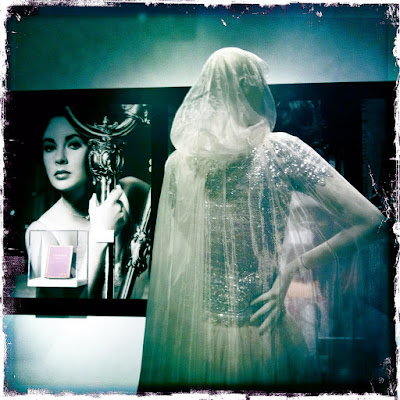 A bound copy of Cat on a Hot Tin Roof! Loved this. Would have loved, even more, to look inside and see what notes were in the margins! 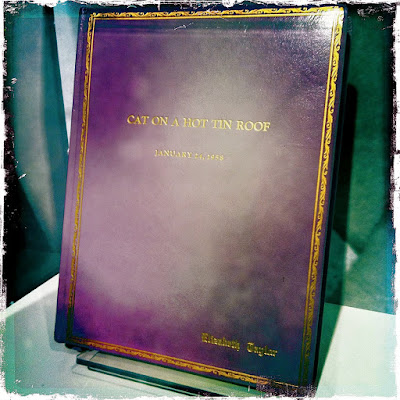 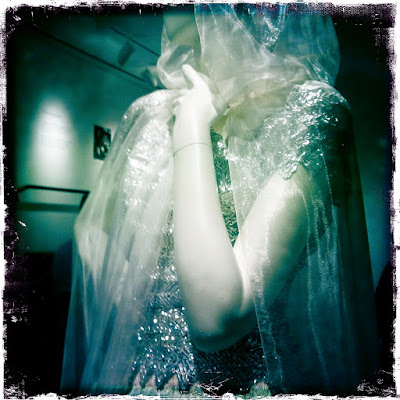 This necklace, made of opera tokins (circa 18th & 19th centuries), was such a fun piece! It was a gift to Elizabeth from the famous costume designer Edith Head. 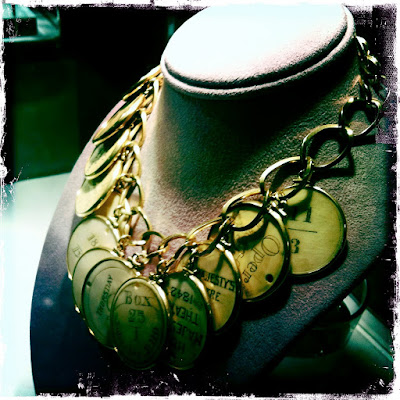 "La Peregrina"~ The Legendary Pearl. Richard Burton had the whole Cartier designed necklace below made for it (that big pearl drop on the bottom.) It was once from the Spanish crown jewels in the early 16th century and is a 203-grain pearl. We were told by this guy who was there and called himself a "jewelry geek" that the brooch is detachable and you can attach the pearl directly to the choker. You know, depending on your outfit. ;)
Estimate: 2-3 million, if you are interested. 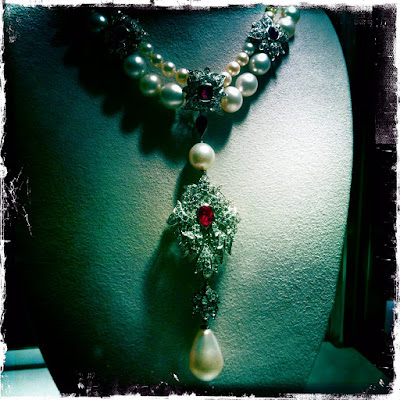 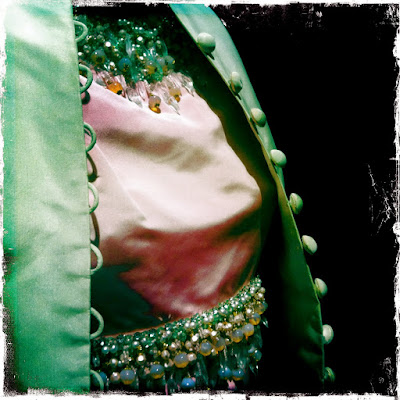 The tiara was a gift from her husband Mike Todd. (circa 1880, given to Taylor in 1957) After she wore it, many a gal decided she could pull off the tiara look, but you know, unless your a bride, a homecoming princess or actual royalty? Tough to pull off. 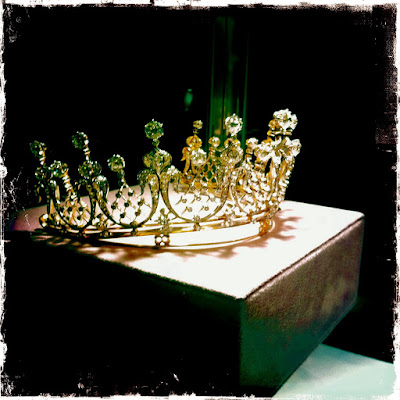 In this video you can see a clip of her in the tiara.
Iconic Warhol image ... 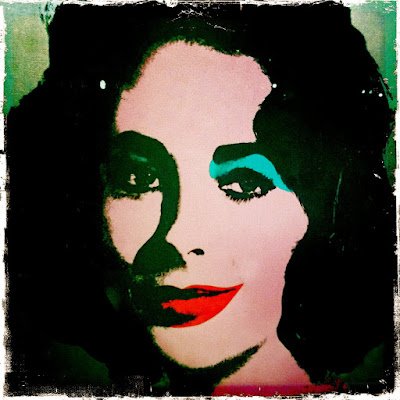 There are hundreds of costume jewelry pieces that are going to be auctioned as well. One guy said that some pieces might go for a hundred bucks! Hard to believe but what do I know?
The Taylor Burton Diamond was also on display. 33.19 carats (estimated 3 million bucks.) You know, just a little bauble. I know I posted this YouTube video before, but it continues to crack me up! Just make sure you get to 3 minutes 10 seconds ... Hilarious!!!
http://www.youtube.com/watch?v=NsFaxeWnSz4
Big girls need big diamonds.
~Elizabeth Taylor
for tour information, click here
Have a fantastic weekend!!!
Posted by Cobalt Violet at Friday, October 21, 2011

fabulous!...she liked to wear the really big stuff!...not sure where a girl would wear such huge jewelery these days..... all very regal...she was exceptional and ...what a life!...lucky you to see this exhibit....the stuff of legends.....

so many memories of her life flood back in seeing your post. her life was like a fairy tale that she breathed life into.

How amazing...so much to share! How fun you were able to peruse it!

The other day someone said I looked Like Elizabeth Taylor....and assumed I heard that all the time.

Wow. Some of that jewllery is a bit too much for me. The butterfly is my favourite.

Gorgeous! Both Elizabeth and the jewels. I enjoyed the video about Mike Todd.

It will be interesting to see what her estate stuff will bring. Since the economy is so bad, it could go either way. Don't know what the Russians or Chinese thought of her.

Hey, this was great! Thanks for "collecting" it for us.

I remember seeing that on TV. Shows how old I am! It really wasmfunny. That exhibit must have been incredible! Thanks for sharing this!

Thanks for the comments! Yes, a lot of it is very over the top, but fun to see! Thanks for visiting!! :)

If you want your ex-girlfriend or ex-boyfriend to come crawling back to you on their knees (no matter why you broke up) you got to watch this video
right away...