Ricotta and the Italian Neo-realists

There are fine things which you mean to do some day,
under what you think will be more favorable circumstances.
But the only time that is surely yours is the present.
~Grenville Kleiser
Since I have been blogging about my trip to Colorado, a month has gone by, with all sorts of little "in-town" adventures!
I have been trying, for a year now, to get over to the Instituto Italiano di Cultura in West Lost Angeles. They have classes, promote Italian Culture and if you are on their email list, find out about Italian related events and "goings on" in the area.
This time it was the opening and reception of two photo exhibitions, The Neorealist Movement: Film Frames 1941-1952 and Memories of Sicily: 1940-1942. This was in conjunction with a series of screenings called Days of Glory: Masterworks of Italian Neo-realism organized by UCLA to be held at the Bing Theater (at the Hammer Museum) and The Los Angeles County Museum of Art. It begins October 15th, runs through November 16th and includes some of my favorite Italian Films like Rome Open City, Umberto D and Paisan.
La Terra Trema Luchino Visconti, 1948
(from the exhibition) 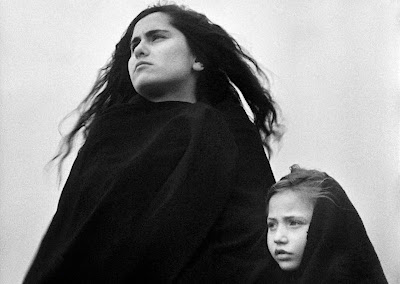 My niece Elizabeth, very recently, moved to Los Angeles and started school at USC. I brought her in on this little LA adventure and we met up with my friend Anna from my Italian class last year. Anna just started at UCLA this semester and just happens to be in architecture classes with my niece's best friend. Small world! Elizabeth has actually been studying Italian for two years, as well, so it was perfect little outing.
Inside the photo exhibition ... 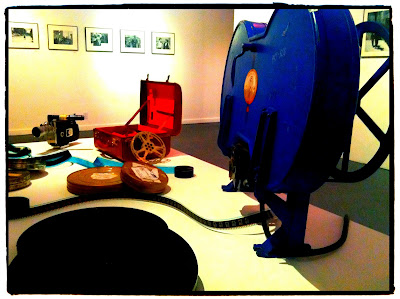 Photo below is from Roma Aperta Citta` (Rome, Open City) with Anna Magnani 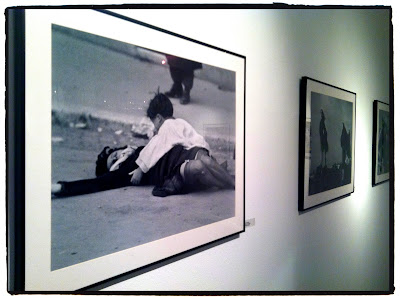 One of the reasons we went there that night, was because they were also screening a short film by P. P. Pasolini called La Ricotta (1963) which I thought would start toward the beginning of the night. Did I forget this was an Italian evening? I mean, the email said cocktails to follow but the evening actually started with people visiting and drinking Prosecco. Most fun I've had people watching in a long time. (Including some fabulous foot-ware!) Then, about an about an hour and 15 minutes later, we all filed into the little theater, which was completely packed. 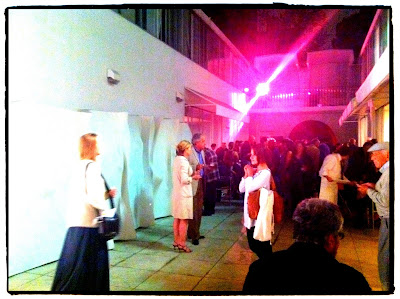 Bicycle Thieves playing on the wall out in the courtyard ... 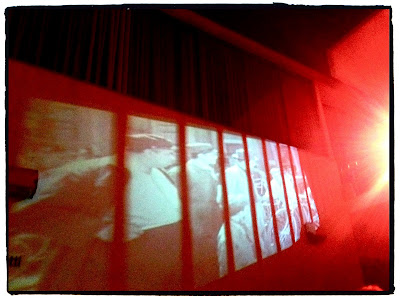 Before the film, the director of the Institute spoke, then the new Council General of Italy, Giuseppe Perrone, then the guy from UCLA who is heading up the film festival (can't remember his name) followed by cinematographer, Dante Spinotti (LA Confidential, The Insider etc.) Then we watched the film which was sad, strange and funny ... very Italian. Funny thing was that Orson Wells played a director who was directing a film about The Passion and he was speaking Italian! 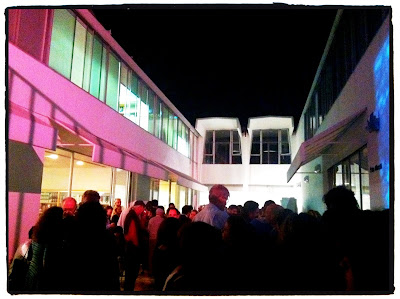 Anyway, the film's title La Ricotta was a perfect excuse to serve everyone ricotta after the screening. Well, not just ricotta ... pasta, parmigiano, olives, wine and limoncello. Fun right? I wasn't really hungry but I can't resist Italian food when it's right in front of me, and the wine was really good so I had to indulge. The law of Lucinda. ;)
The building was also very cool ... It was very "stylie" and I really wish I had gotten photos of the lucite tables and chairs. So fabulous. I didn't have my camera (crazy right?) so these were all taken with my iPhone. 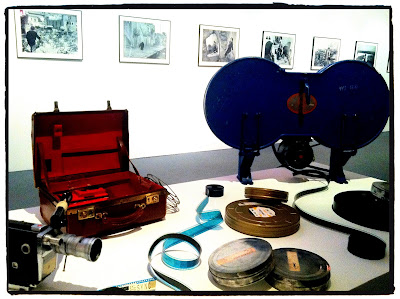 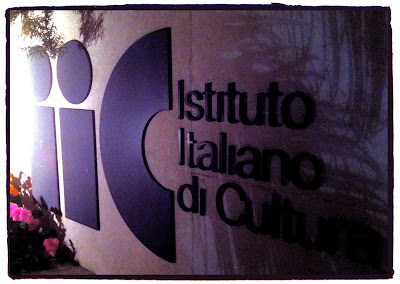 If you don't know much about Italian Neorealist film, Martin Scorsese's documentary My Voyage to Italy is a great introduction. I first saw it from Netflix but I think the entire thing might be on YouTube. These post war films by directors like Rossellini, De Sica, Visconti and Antonioni, are beautiful, moving, sometimes shocking and always touch you on an incredibly deep level.
Here are the first two segments ...
I thought the evening would consist of looking at a few photos, screening a short film and maybe a glass of wine. What we ended up with? A bit of fabulousness on a Tuesday night. It was all a little unexpected and that is what I love about life. Unexpected experiences. Well, the positive ones anyway!
The real voyage of discovery
consists not in seeking new landscapes,
but in having new eyes.
~Marcel Proust
Hope you are able to grab a moment, for a little mini adventure this week!
Or at least, rent an unexpected movie or pop into a little restaurant you've always wanted to try!
Blessings and light, my friends!
See you soon!
Posted by Cobalt Violet at Monday, October 03, 2011

Thanks for this little excursion. My Voyage to Italy is now on my to do list.

Wonderful; I know very well all these films you mentioned; they truly make part of the most remarkable ones...!

wow that must have been one special evening - the food alone would have made it worth it.

Fabulous post Lu!! Thankyou for this beautiful tribute..and for sharing your wonderful time as well..very cool..awesome!I am sitting right now with a glass of wine watching the two vids you left..thankyou..so close to my heart...Saluti..I shall enjoy them..
Victoria

congratulations for this wonderful post.
I did not know that Los Angeles had an institution so important about the Italian culture. I'd like to visit it, because here in Italy we do not have a place like this:)

Jane~ Thanks Jane! Italy would be amazing!!! I will definitely let you know when that happens!! :)

Don ~ you are welcome and I don't think you will be disappointed with the doc!

Loree~ Yes, food alone is always worth it. ;)

Victoria~ Yay! I hope you enjoyed the videos with your glass of wine! That made me smile! :)

Koralee~ Thank you and thanks for visiting!

Sounds like a fantastic time. And I'm totally behind the "law of Lucinda.". Thanks for the heads up on the films. What a perfect adventure this turned into.

There is a chance you are qualified to get a free Apple iPhone 7.