First, let me say congratulations to my Catholic friends and the new Pope Francis I. Although I'm not Catholic, I became totally obsessed with conclave coverage. In part, it's my love of Rome and its history. And, of course, any chance I get to watch anything involving Italy on T.V., I'm totally in. I even signed up at popealarm.com to get a text as soon as there was white smoke!

My friend Rachel, laughingly, told me I was probably a Borgia, in a past life. "They were horrible!" I said. However, it's true, I'm totally obsessed with the TV show. (The Borgias, have you seen it? You can rent it Netflix!)

When I heard the new Pope was calling himself Francis, I burst into tears. I was so moved, which I really wasn't expecting. I have such a strong connection to Francis of Assisi and have read so much about him and his life (plus 3 trips to Assisi) that I feel like I know him personally. Anyway, the whole thing got me! That morning, after getting my text saying, "We have white smoke! We have a pope!" but before they announced who it was, I had thought, What if he becomes a Pope Francis? 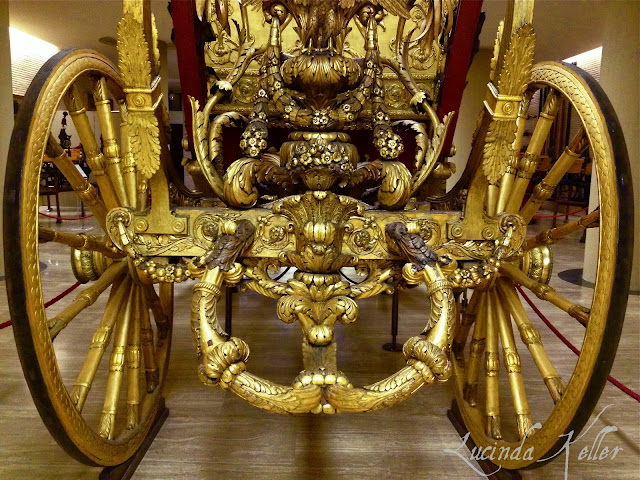 I'm skipping ahead a few days, in the posting of my trip, since this subject goes with what's been happening in the news, with the new Pope.

It was evening in Rome, after a long day at the Vatican Museums, and I was to meet a young woman that I "knew" from Instagram. We planned to meet up for coffee, when the museum closed, but I still had about 45 minutes before I needed to leave. I wasn't sure where to go. They'd closed up the Etruscan art, so I asked one of the cute Italian guards if there was anything else I should see before heading out.

He told me to go to the Carriage Museum. When I walked in, I had to laugh, because there were ... well ...  a lot more guards than there needed to be, in just one room. At least 5 of them were all in a cluster, shooting the bull, which seemed kind of perfect, for what was basically a garage. Boys like vehicles, you know.

Oh, and by this time, I had no camera battery left, so all of these photos were all taken with my IPhone.

Sedan Chair of Pope Leo XIII
Domenico Morelli, Naples - 1887
Carved in wood, there are little cameos across the top. 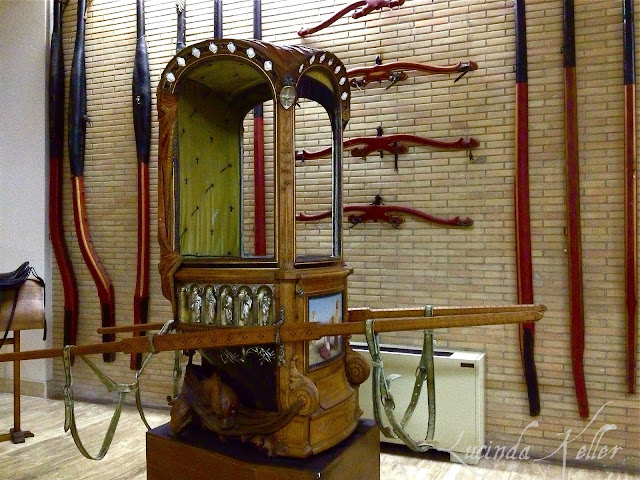 This horse drawn carriage, below, is pretty spectacular and is the grand daddy of them all. It takes up, almost, the entire center of the room. 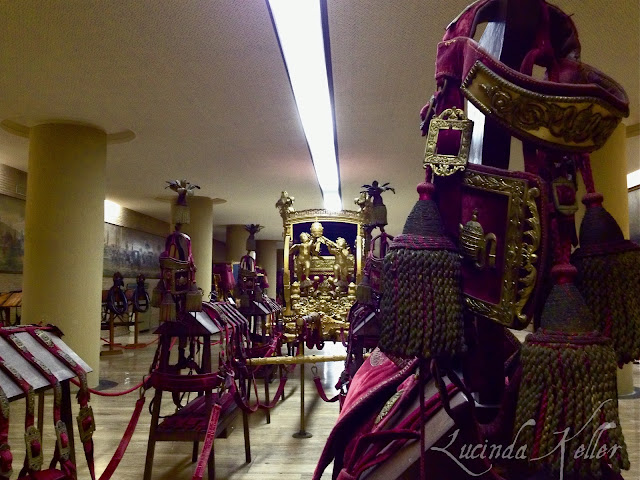 It was commissioned by Pope Leo XII, designed to be pulled by 6 horses and made entirely of wood. The whole thing was covered completely in gold gilding, as you can see. 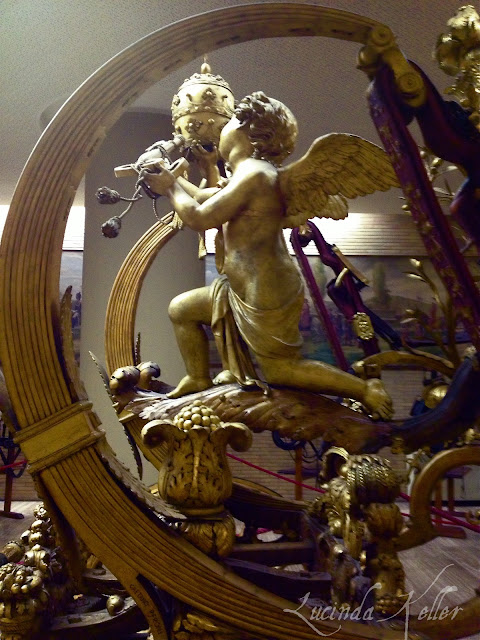 The inside, is covered in red velvet, or at least from what I could see and what the sign said. It's so big, it's difficult to see inside, unless you are Laker. 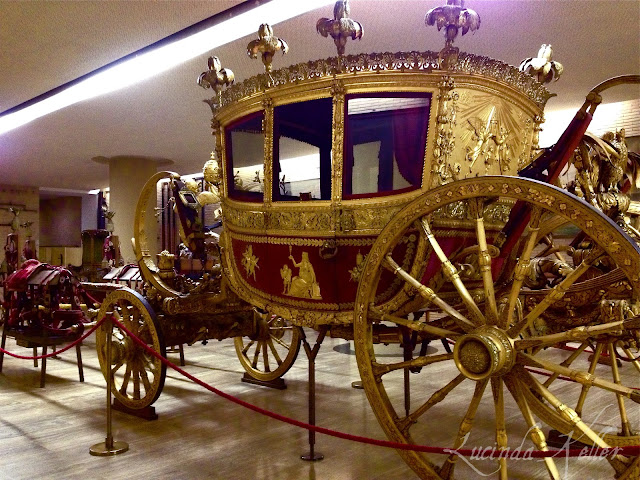 The wheels came up to my chin!

1870 was the last time The Grand Gala was seen on the streets of Rome. It carried Pope Pius IX to Santa Maria del Popolo. (Wonder if the Pope enjoyed the Berninis and Caravaggios as much as I did!) 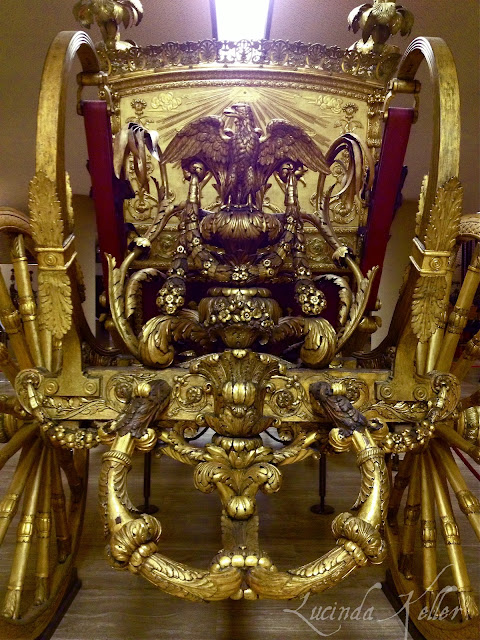 Gala Berlin with Throne (below)
Casalini Brothers, Rome - circa 1825

Manufactured during Leo XII's pontificate, this carriage was used for popes until the beginning of the 1900s. In case you happen to know your Popes, the crest's on the doors are of Piux IX and Pius X. 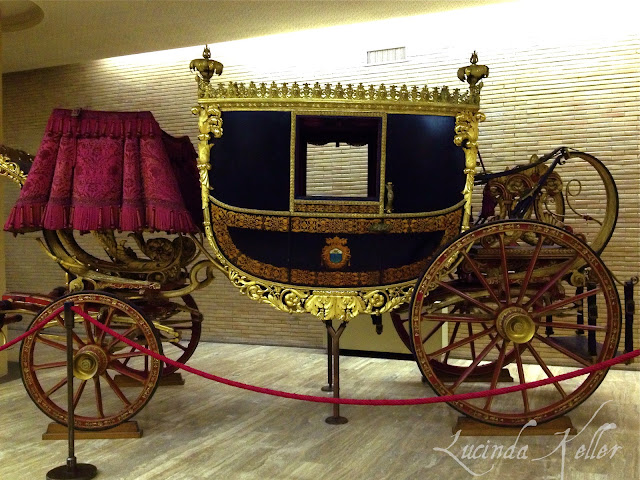 The Casalini Brothers, were renown carriage makers and this one (don't you love the blue?) was made during the time of Pius IX. 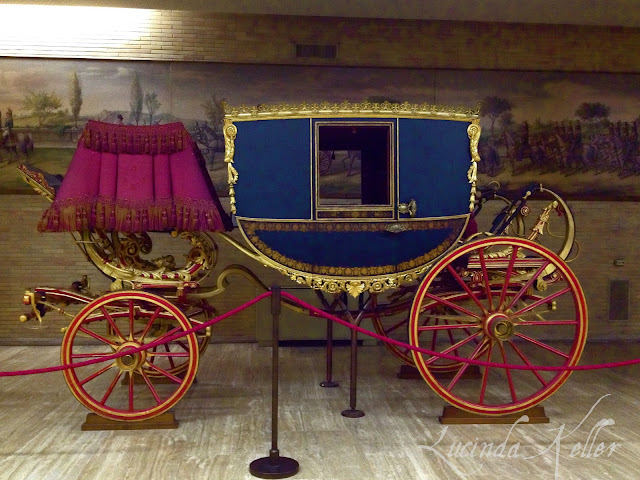 The oldest of carriages, it was used by "Palace Services" for transporting prelates of the Curia, as well as Cardinals, and was in use until 1922. I love tassels, don't you? 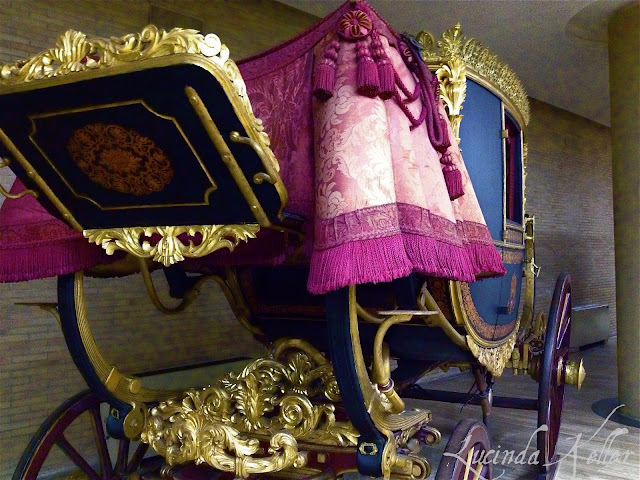 Made by Gaetano Peroni, in Rome, who was the supplier to the Papal stables. It belonged to Cardinal Luciano Luigi Bonaparte.

It was a gift from cousin, Napoleon III, when Luigi was nominated to become a cardinal. Isn't family great? 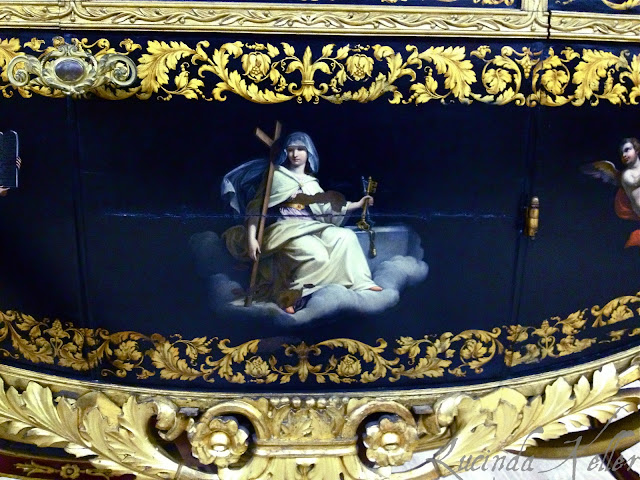 Cardinal Bonaparte detached himself from the the French court and the Curia. It is said, he was a patron of the arts and led a life of penance and charity toward the poor. But apparently, this didn't keep him from having a swanky carriage. Go Luigi.

When he died, he left the carriage to Pope Leo XIII. 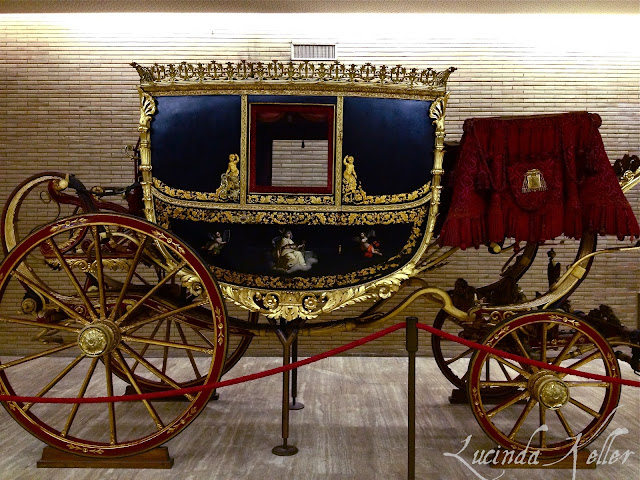 When I saw the carriage below, I thought, how lovely and simple. Well ...

Carriage for Funeral Cortege
Casalini Brothers, Rome 1915
Made during the Ponificate of Pope Benedict XV, it was only for funerals of cardinals and others in the Roman Curia. It doesn't have breaks. I guess that's one way to get to a funeral. 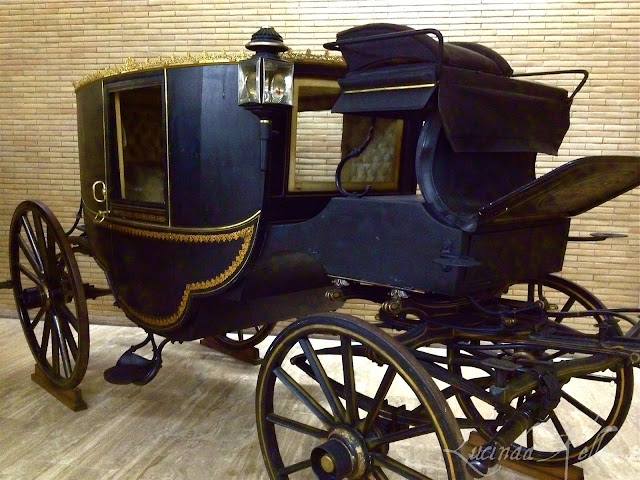 Donated by the Graham Brothers to Pius XI in 1929. It was the 3rd papal Automobile. The first was a Fiat 525 and the second, a Isotta Fraschini Type 8. (Just in case you were dying to know.)

This Graham Paige was used by Pius XI to go to St. John Lateran (see previous post), in 1929, which was the first time the pope had left the Vatican since the 1870 fall of Rome. (The 1929 Lateran Pact, finally allowed the Pope to leave the walls of Vatican City!) 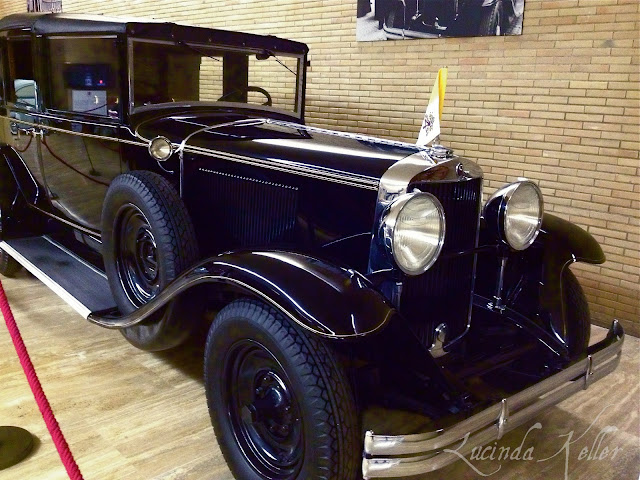 It was donated to Pius XI in June of 1930 by Citroën Italy, and like other cars and previous carriages, the back compartment was fitted with a seat, something akin to a "papal throne."

I wish the door had been open, because the sign said the interior is arranged like a "1700s Venetian style drawing room, with crimson brocade."  Not sure what that all means, but it sounds pretty nice. I can't help but giggle like a 12 year old at the name of this vehicle, wondering what the pope thought when they told him what it was called. 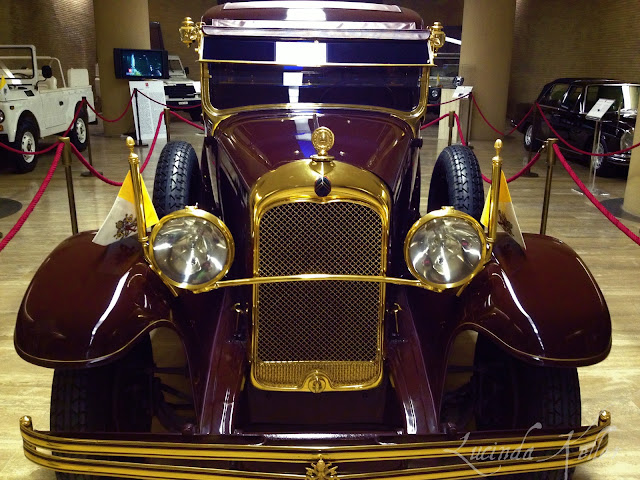 Mercedes Benz - 300 SEL Limousine
Daimler Mercedes Benz, Stuttgart - 1966
Received as a gift, to Pope Paul VI, this car was used at the same time as a Mercedes 600, but was rarely used.

Then, Pope John Paul II chose it immediately, as his main automobile, but after the assassination attempt in 1981, the car was fully armoured. 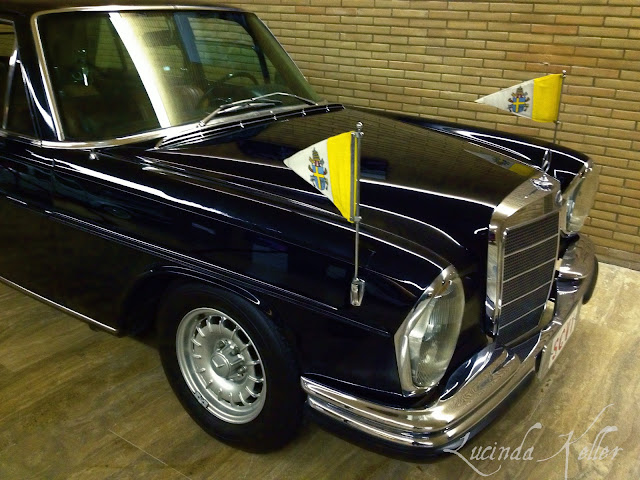 Fiat 1107 - Nuova Campagnola
Fiat, Torino - 1980
This Fiat was donated by the company, during Pope John Paul II's visit to Turin. It was only used for a year and one day. This is the vehicle he was riding in, during the attempt on his life. 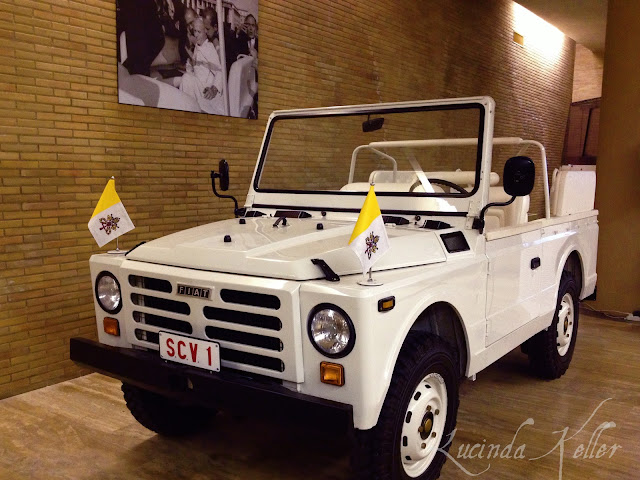 Volkswagon Beetle
Pope John Paul II received this Bug, in 2004, as a gift from the president of Volkswagen Mexico, and a group of workers from the factory. They presented it to him, in Saint Peter's Square, as a thank you gift for the Pontiff's visit to Mexico in 2002. It was the last Beetle ever, to come off the line Mexico. 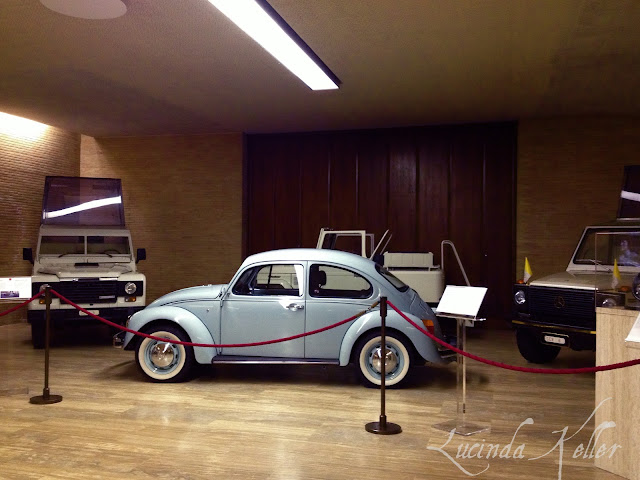 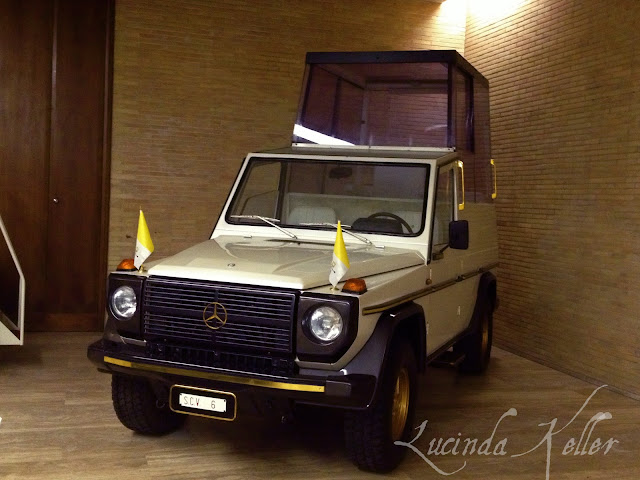 After my little trip down Popemobile lane, I headed off to meet my Instagram friend, Laura Conforti, for a cappuccino. (Look her up if you are on Instagram!) Actually, she had a coffee and I had wine. After all those many hours seeing the Borgia Apartments, the Rafael Rooms, Sistine Chapel ... Roman Art (it goes on and on) my dogs were barkin'! (My feet were killing me!)

All I'd known about Laura, is that she travels a lot and takes great photos! She was born and raised in Rome and takes off whenever she can. It was wonderful meeting her in person ... in Rome! I hope to again, on my next trip, whenever that may be!
It would be great if some day she could come out West ... far West! To California!

Anyway, hope this finds you all doing well, happy and healthy!

... and in honor of all the Mercedes Popemobiles ...

Talk about pomp and circumstance!! I think of all the Popemoblies, I'd take that cute baby blue VW!
How interesting to see these all in one place...who knew?!

Lucinda you're better than a history book. I had no idea the popes have all these carriages and fancy cars. I loved this post.

Very nice and special pictures.....i like this very much Lucinda.

Some pretty fancy Popemobiles, Lucinda! I fell in love with Pope John Paul II's rides - especially the bug. They're just so John Paul II (my favorite Pope so far).

Loree - Thanks! I do try go on websites or get info while there ... on this occasion, I took pictures of all the signs that went with the carriages and cars, then put it in my own, sometimes silly, way. :)

Kerry - it was funny because they were across a small courtyard and down some stairs from the main museum. Probably under the main museum. I like the bug too. And the little blue carriage ... not so practical in Los Angeles though!

Joop- Thank you so much and for visiting too! :)

Candy- especially after learning about some of the ... interesting popes of the past, John Paul II is my favorite so far too, as far as seeming spiritual and well intentioned ... but it's fun to read about the craziness in the renaissance! :)

I remember visiting a cameo "factory" as a very young teenager, near Naples. A huge rectangular hall, tall windows on both long sides, rows and rows of small tables and woman and men bent over pieces of conch shells, carving portraits.

Merisi! Maybe some were for a popemobile! I love cameos ... I wonder if you can still visit those places! I would love that! What a great experience!

Fantastic! I think you might enjoy this series on the National Coach Museum in Lisbon: http://oeirasdailyphoto.blogspot.pt/search?q=coach+museum

You go, girl! Full of wonderful and hearty bits of info. Love seeing the 'mobiles' through time!

Lucinda, we had just commented about St. Francis a day or so before hearing about the new Pope Francis. I love the Borgias show and look forward to another season before too long. Your iPhone sure takes great pics.

i just happened to watch cnn at the moment the smoke signaled a new pope - as a fallen catholic, i have to say there is much about the pomp and circumstance of the church that is next to none.

what a beautiful blog you have - will look forward to return visits.


I love what you guys are usually up too. Such clever
work and exposure! Keep up the superb works guys I’ve incorporated you guys to my personal blogroll.

You could be eligible for a complimentary Apple iPhone 7.

Are you looking for free Twitter Followers?
Did you know that you can get these ON AUTO-PILOT AND TOTALLY FOR FREE by registering on Like 4 Like?