Ciao Tutti! I can't believe it's my 400th post!
To celebrate, let's have a little vino rosso, pasta and enjoy a little festa, at Piazza Navona!

It was a Saturday night and had I met up with a friend of a friend, Inta, who'd moved to Rome a year ago. She met me at my little "Golden Rooms" and we headed Southwest toward Piazza Navona. She suggested Enoteca Cul de Sac ... and, it happened that I had been there in 2010 with my folks! They had a great wine selection and I loved their homemade ravioli!

So ... I ordered ravioli again. :) Oh, how I love a good ravioli! This time it was duck, which I don't usually order but it was really good. 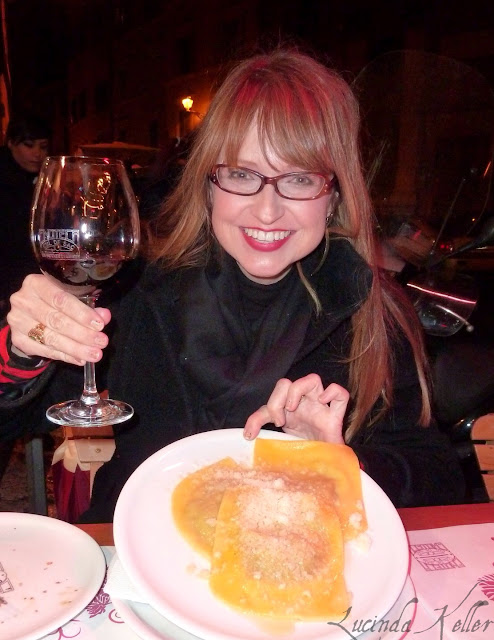 The wine was so good on the previous trip, that I went on my iPhone, and looked at my blog post, from a couple of years ago, to see what I had ordered. And they still had it on the menu! Handy, these blogs of ours! 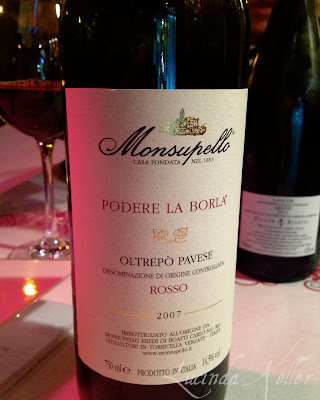 Inta ordered a meat platter ... very tasty with the wine! 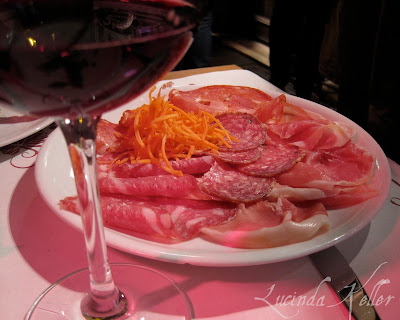 We sat outside under an awning, while it rained around us. As usual, people were standing around waiting for tables. Fortunately, we got there just before the rush.

Here's the inside of the restaurant. They have a HUGE wine selection. To see my other post about Cul de Sac, click HERE. 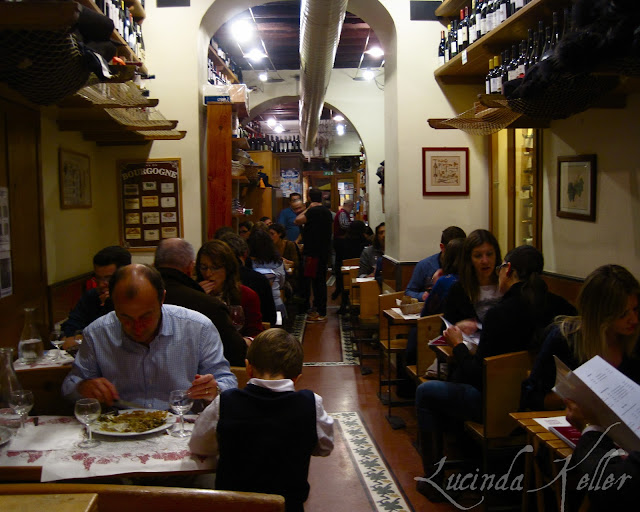 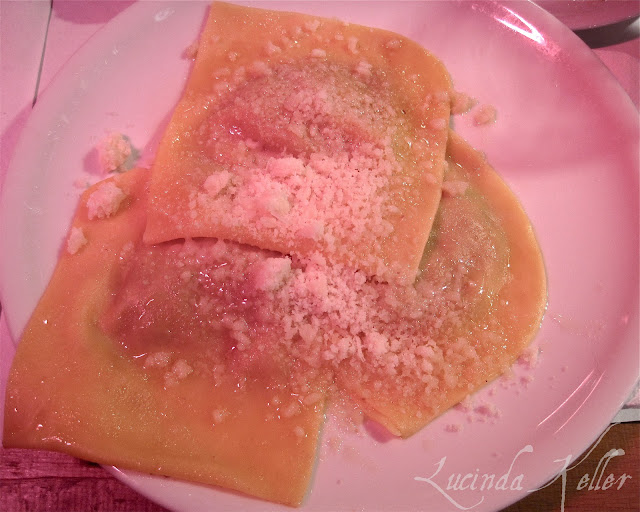 Before going on the trip, I tried to find out if all the booths and carousel would be up, in Piazza Navona, when I was there, but it was it was unclear. As I mentioned, a lot of decorations don't go up until the 6th or 7th. It was December 1st in Piazza Navona and ... see for yourself! 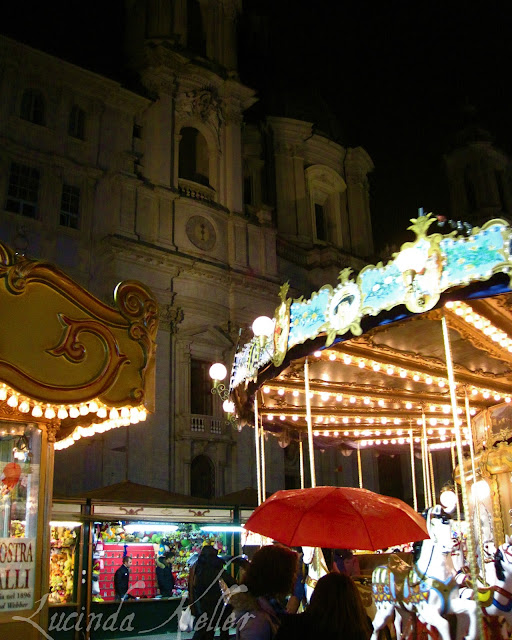 OH, and I have to mention that on my two previous trips to Rome, the big Fountain of the Four Rivers by Bernini, in the middle of the piazza, had been covered in scaffold both times! But now? 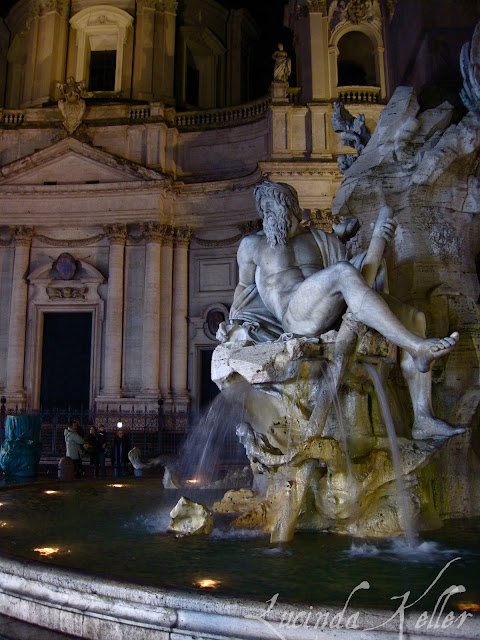 Yay! The fountain was in full view!

The venders set up all along the piazza, except for in front of Borromini's Church of St. Agnes. 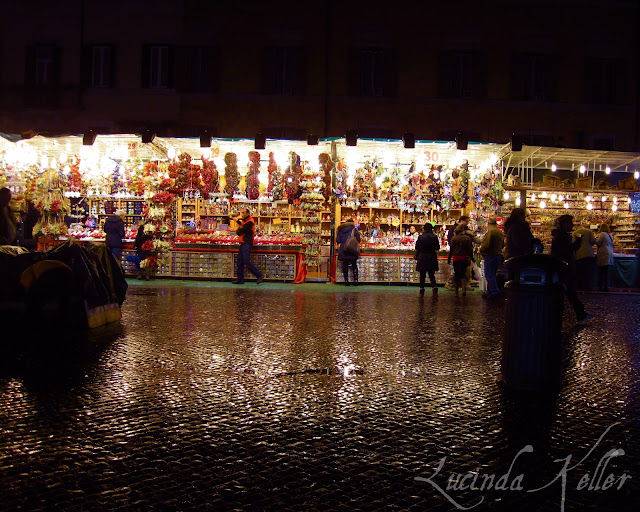 I loved all the nativity pieces and  was looking for a baby Jesus. I have Mary and Joseph but the baby Jesus I had was way to small for the set. In fact, so small, he looked like a premie. So, I was on a hunt for a (reasonably priced) baby Baby Gesù, of a certain size. 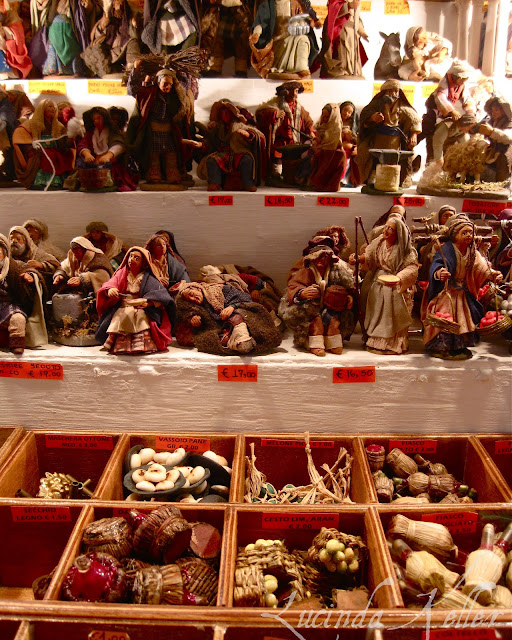 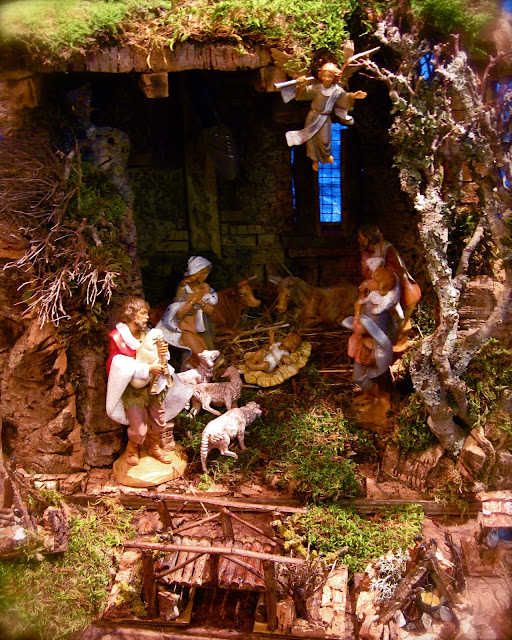 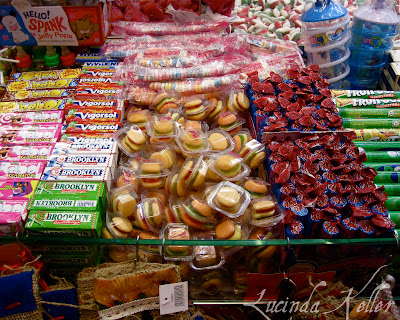 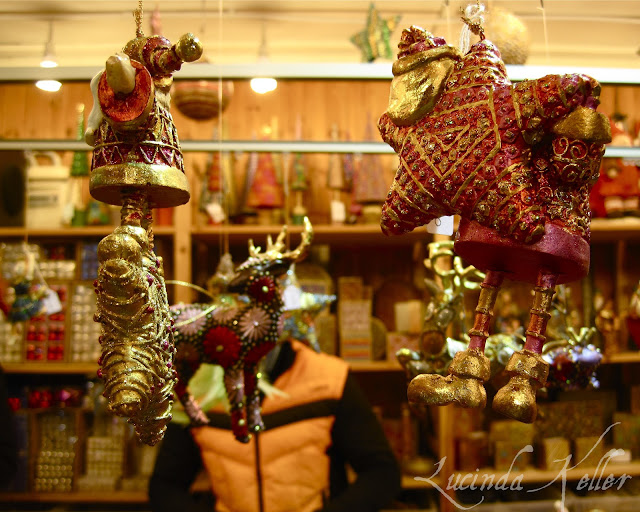 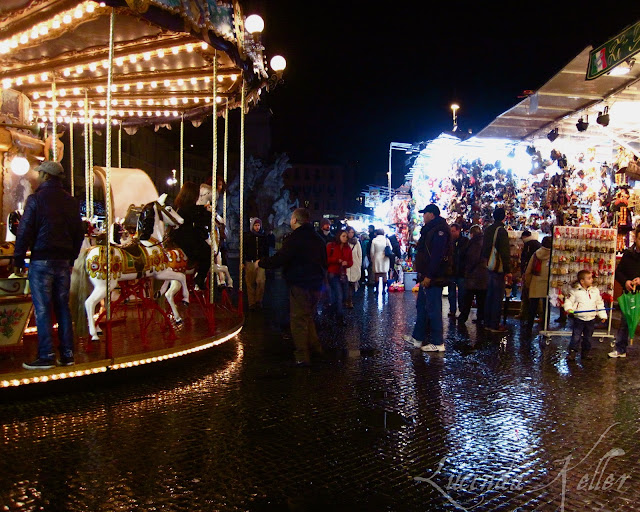 Pile o' nougat ... which I got for my sister. (not the whole pile, just the coffee flavor.) 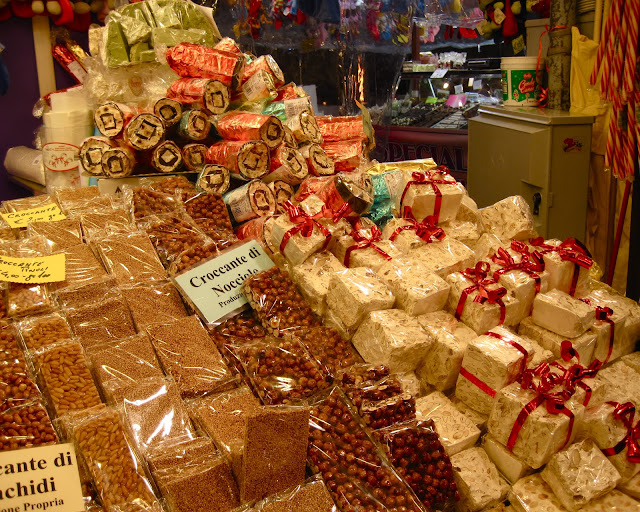 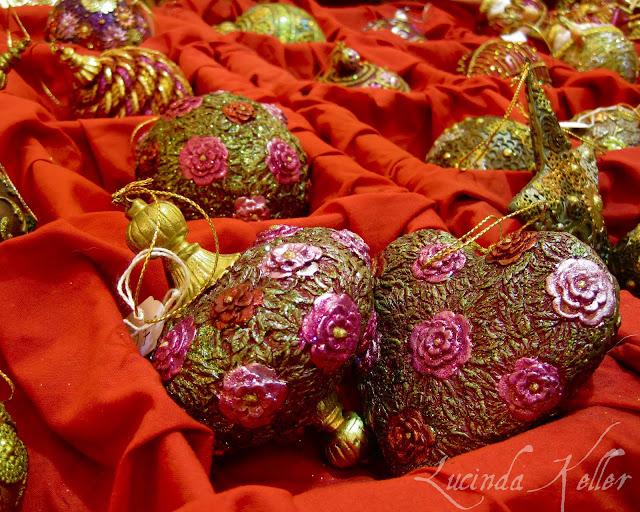 Perfect Baby Gesù, but only came in a set ... 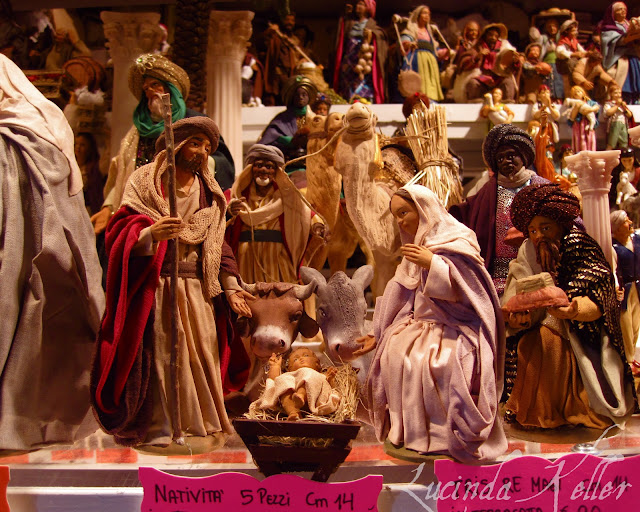 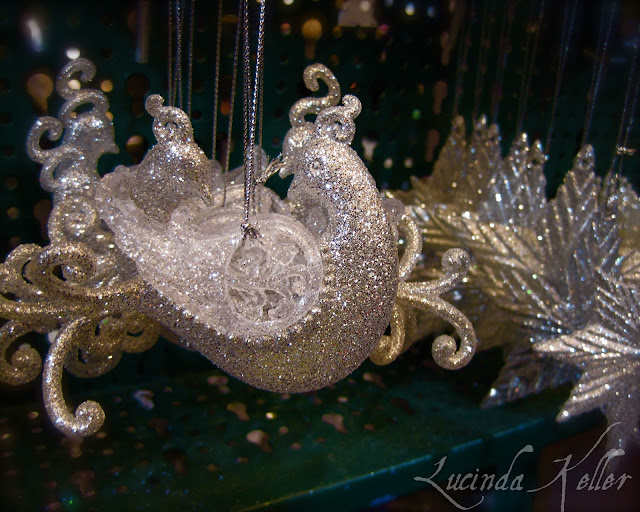 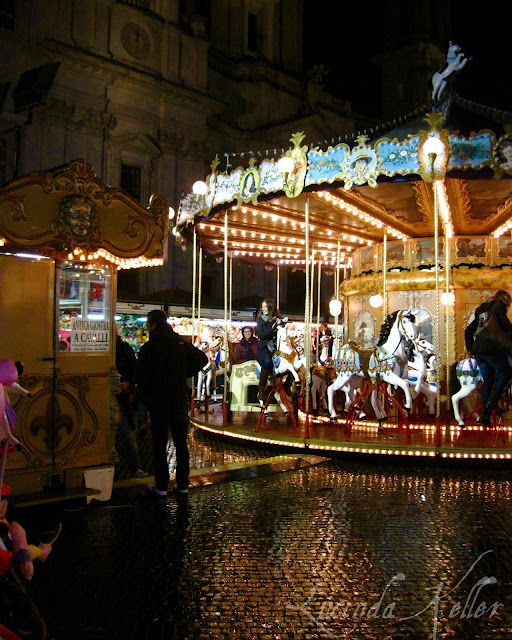 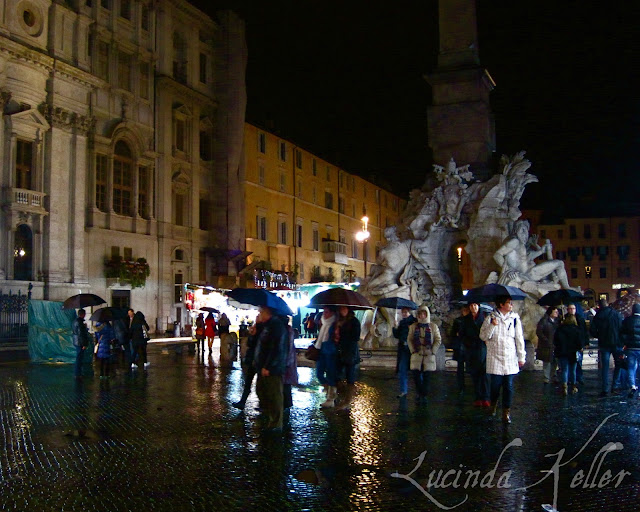 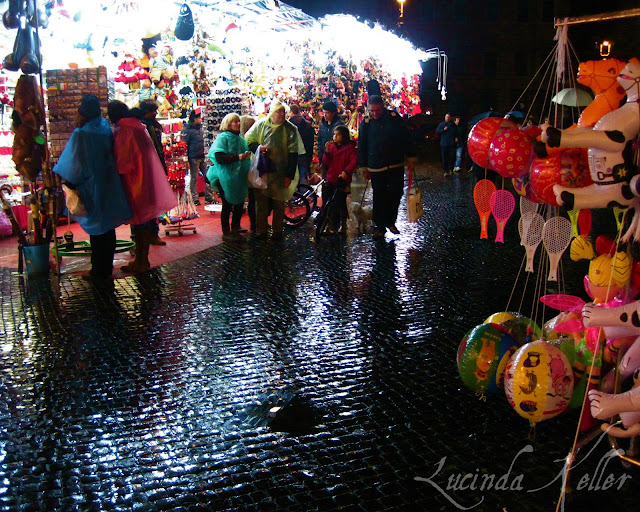 There were TONS of Befanas! So, choosing the right little Befanas (Sort of an Italian Christmas witch) for members of my family, became another fun hunt! I actually ended up with a "bag o' Befana" ... But more on the little witch later! 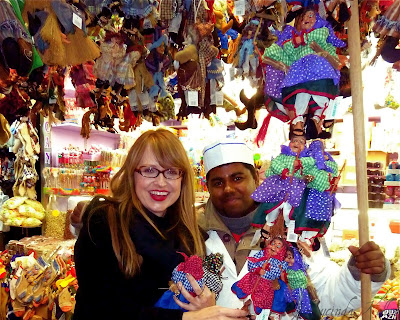 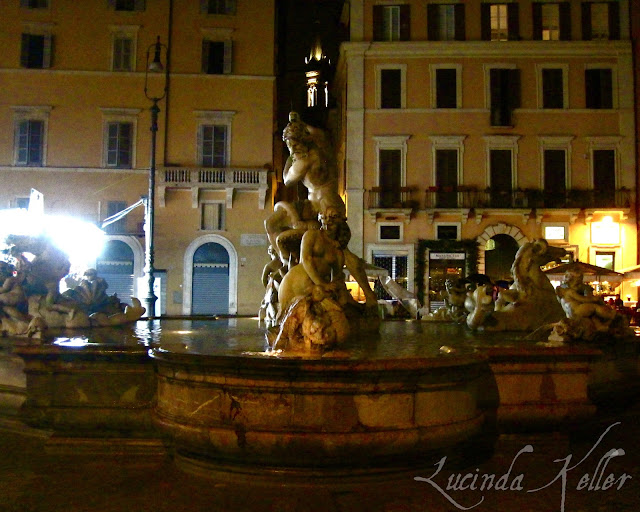 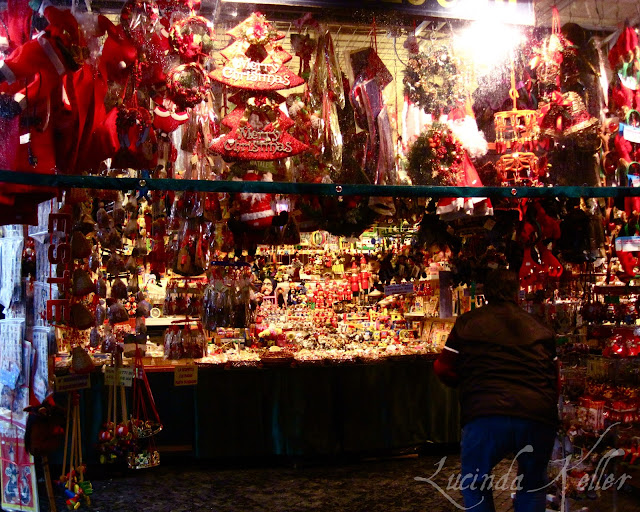 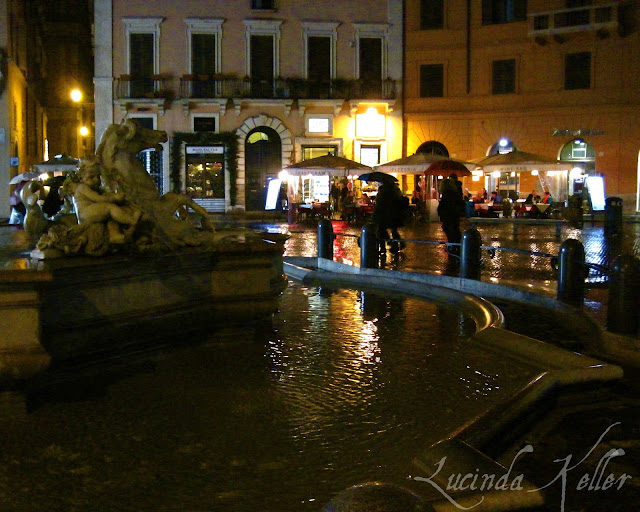 On our way back to my little "hotel," we rounded a corner, and there it was! NOW it really felt like I was in Rome. The Pantheon. There is nothing like it. 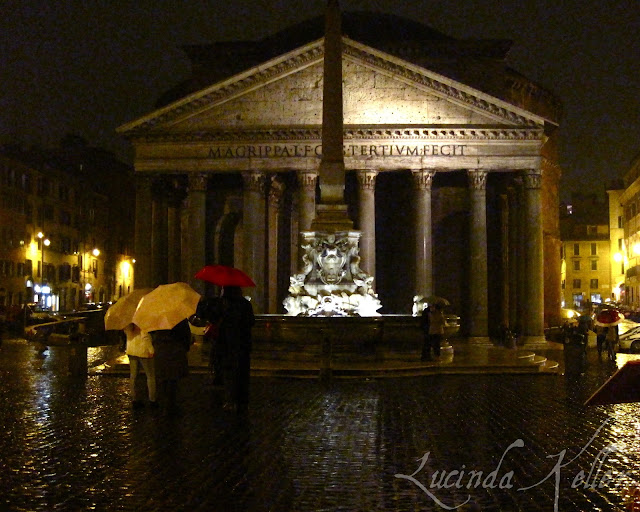 Inta suggested we stop and have a drink. We had the perfect view. The shot above was taken from our table! A much easier table to get with the wet weather! The awnings, once again, protected us from the downpour. I can't remember the name of her drink, but I had a limoncello and chatted, and enjoyed the wonderful view. Thanks Inta!

It was great to get out and be social, and have someone to chat with! I am someone who doesn't mind spending time alone. Sometimes, I might even prefer it. But, by this time, it was really nice to have someone to hang out with. All the chatting inside your own head can get old, even though I'm pretty good company. ;) 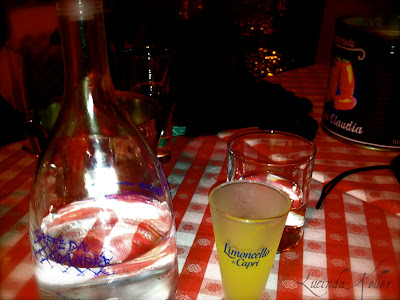 Oh! And I found my baby Gesù! I put him on my bedside table in Assisi. I brought him home, and he's the perfect size. 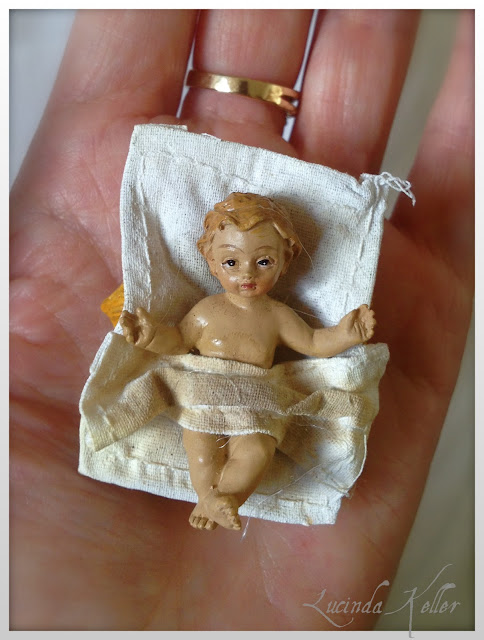 On Facebook, Marianne Williamson posted something, that I want to pass on to you. Jean Houston had shared this quote. Victor Hugo claimed Galileo spoke to him in a seance! Whatever you think about that, and whether it was Galileo who said it or Mr. Hugo that wrote it, it's ... well, read for yourself!

"You know what I would do if I were in your place?
I'd drink from the milk basin of the Milky Way;
I'd swallow comets; I'd lunch on dawn;
I'd dine on day and I'd sup on night;
I'd invite myself, splendid table-companion that I am,
to the banquet of all the glories,
and I'd salute God as my host!
I'd work up a magnificent hunger, an enormous thirst,
and I'd race through the drunken spaces between the spheres
singing the fearsome drinking song of eternity."

Congratulation, Lucinda. It is always a pleasure to visit your blog and enjoy the stories and your photos. I am looking forward for more to come. Have a great day, Inge

Congratulations, Lucinda, and best wishes for many many more future posts!

I enjoyed your images of Piazza Navona at Christmastime immensely! I have such fond memories, the sights, the smells (one of them the scent of burnt almond, wafting in the cold winter air), the sound of peasant bagpipers from the Abruzzi, magical.

it is undeniable that you are an ardent blogger! Congratulations! maintaining a blog is not easy as other think. ~
ilikesheds.com

Piazza Navona looks gorgeous as always. I've never been to Rome at Christmas time. Maybe it's time to book a little visit :)

congratulations Lucinda !
what a post ! breathtaking !
happy you are
wish you a wonderful week

400 posts! Congratulations! I love all of the photos, Lucinda. I wish Jim and I could slip away to Cul de Sac right now, but we're going to have to settle for whatever I can come up with in our kitchen:) I'm so happy that you found your baby Jesus. Looking forward to your next post.

Wow! That ravioli puts Chef Boy Ardee all to hell! Looks like a fantastic place to sup...the market, the lights, the rainy sidewalks...it's all so gorgeous. Is that the same fountain from the movie "Three Coins in a Fountain"? It is tremendous isn't it?
Congrats on your 400th post!
Love the quote...cheers Lucinda!

Awesome post! I've been in all those places (indoors at the Pantheon, too) but not near Christmas time with all these exciting vendors. Oh, how I would have loved that!!! Thanks for sharing your adventures...I totally appreciate them :)

Congratulations on 400 posts, quite an achievement. Thanks so much for your visit.
Love your photos, they are stunning. Keep well Diane

Thank you all so much for the comments and congratulations! I was so excited to share Piazza Navona with all of you! Glad you could join me! :)

Thanks for visit you are adorable.
Morris

Awe, thanks gentlemen! You guys are sweet. :)

Cheers! :-) Congratulations on the 400th post. What a great selection of shots.

There's a chance you're qualified for a free Apple iPhone 7.