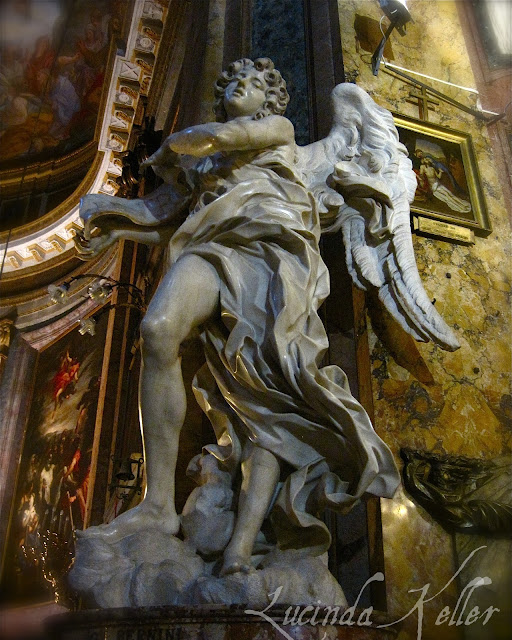 On this trip, I was on a mission to see Bernini's angels. The church, where the two reside, Sant'Andrea delle Fratte, was only a short walk from where I was staying. But, after stopping by 3 or 4 times, and not being able to get in, I wondered if it was going to happen. It seemed to be closed later in the day but earlier in the day, a mass was always going on. (There was sign next to the door saying something like "no touring during mass," and I didn't wan't to go barreling in!)

At one point, I peaked my head in the door. It was almost silent, so I slipped in. There were quite a few people in front of a Mary altar, which turned out to be La Madonna del Miracolo chapel. Then, I saw a priest stand before the group, so figured I'd slide out the side door, and I wound up out in the cloister.

Music is well said to be the speech of angels.
~Thomas Carlyle

Perfect music for the feeling of the cloister, so please press play! ;)

What you can't see in the pictures, is that it was raining... 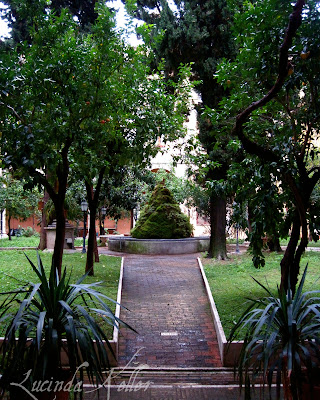 I was alone in this lovely courtyard with beautiful little frescos up in the arcades, that tell of the life of San Francesco di Paola.There was no one there but me, the sound of the rain, and what sounded like, hundreds of birds, singing in the trees. The sound was incredible. 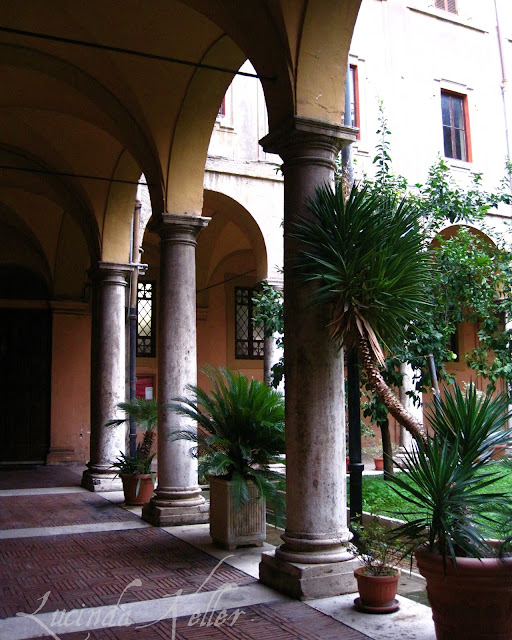 It felt like I had found my own private little sanctuary, in the middle of a busy bustling neighborhood. 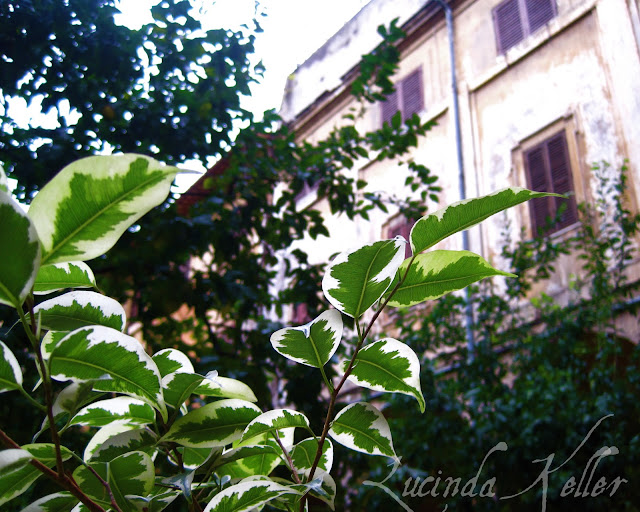 Every blade of grass has its angel
that bends over it and whispers,
"Grow."
~The Talmud 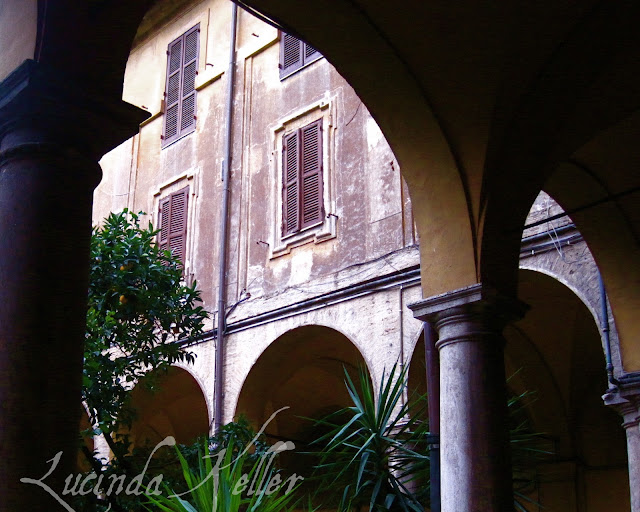 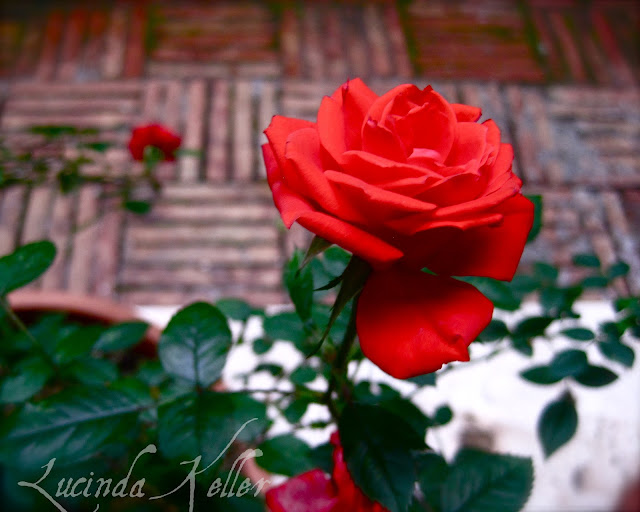 We are each of us angels with only one wing,
and we can only fly
by embracing one another.
~Luciano de Crescenzo 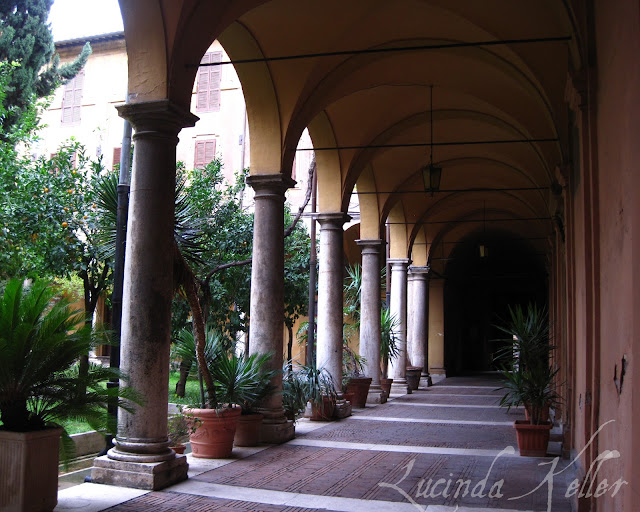 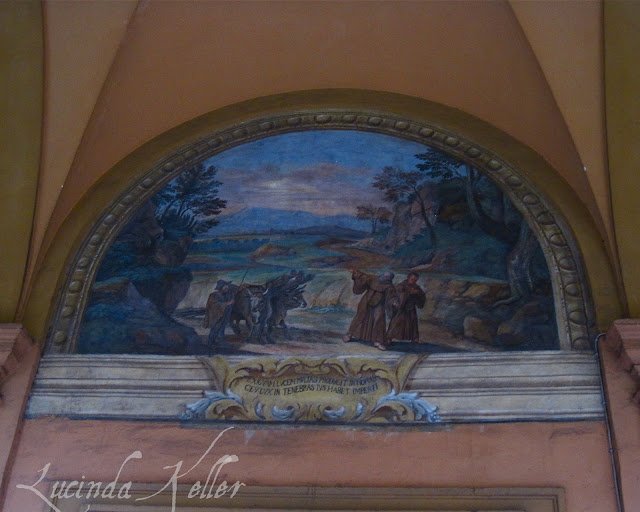 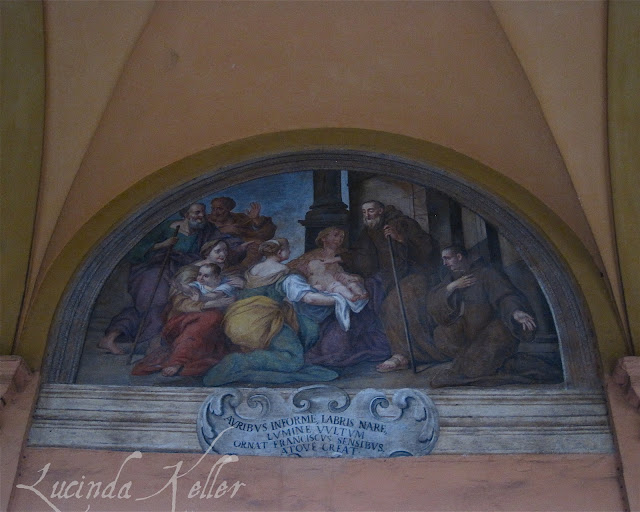 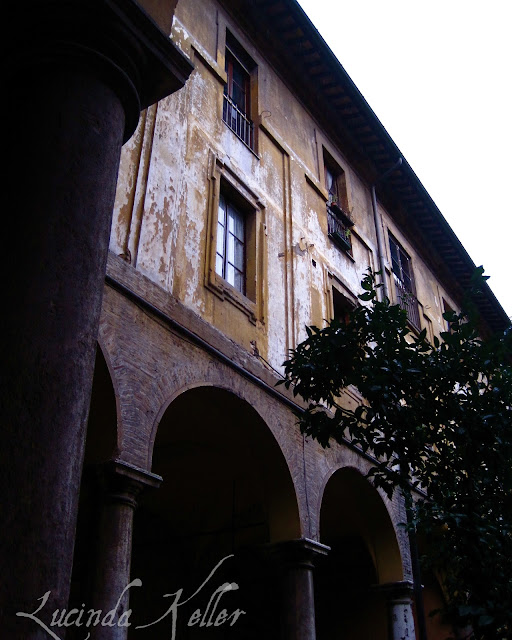 Do not forget to entertain strangers,
for by so doing
some people have entertained angels without knowing it.
Bible, Hebrews 13:2 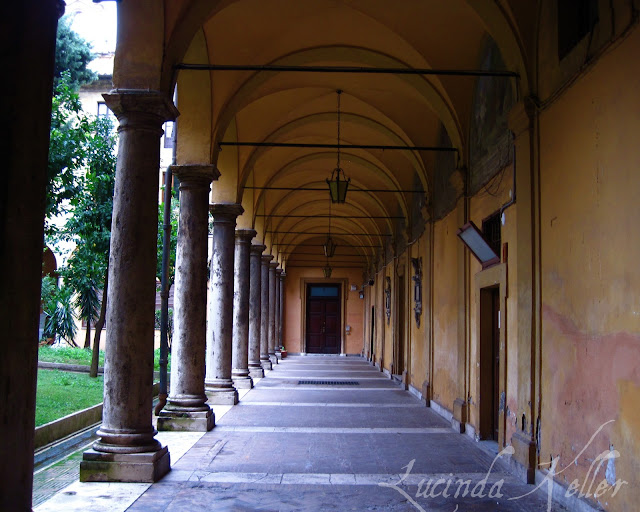 Orange trees in the lush garden ... 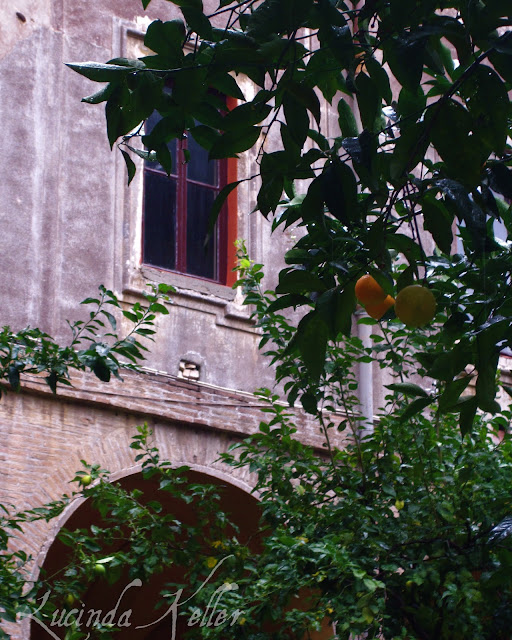 After some time, I finally saw one other person pass silently down the arcade ... 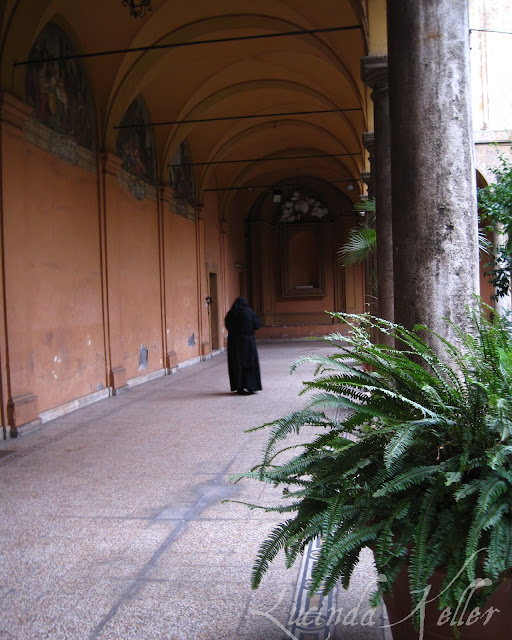 After enjoying the peace, taking some photos and walking around for a while, I went back around to the front of the church, Sant' Andrea delle Fratte, and saw a few people leaving out the main entrance.

Finally, I did the smart thing and asked someone who was exiting the church (and that looked like they would know the drill!) "Mi scusi! Quando ... um, When can I go in?"
The nun replied, "Now! Right now is a good time, go in!"

The Church of Sant'Andrea delle Fratte is a 17th century basilica, dedicated to Saint Andrew. No surprise, the current 17th Century Baroque church was built over another church that dated back to 1192.

Gaspare Guerra started up the "new" design in 1604, and after a few years of work on it ... and then after big delays (50 years), Borromini revamped it in 1653, and after his death it was continued and pretty much completed by Mattia De Rossi. Although, the Façade wasn't completed until 1826!

To the left and right of main altar ... Bernini's angels ... 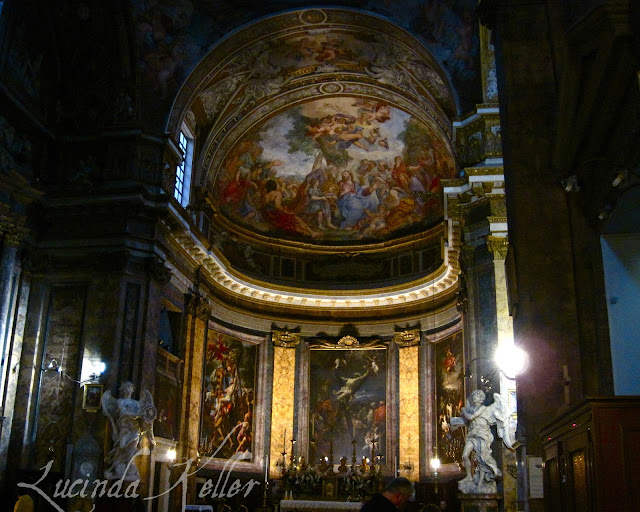 Angels have no philosophy but love.
~Terri Guillemets

Angel with the Scroll by Gian Lorenzo Bernini 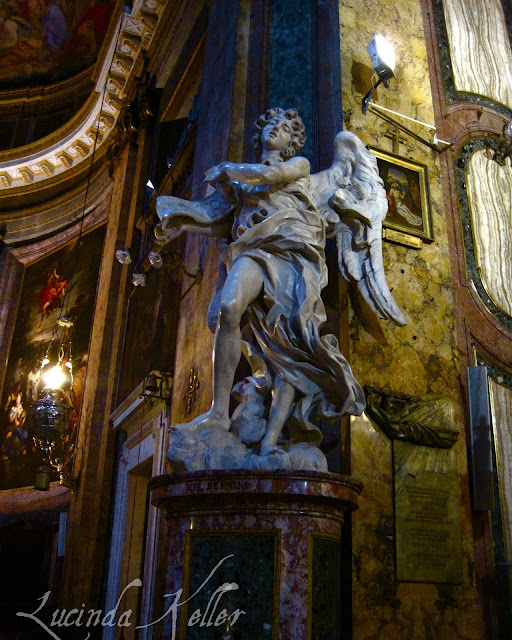 The angel to the right of the altar, (above) seemed so serene and graceful ... and magnificent. Both angels carry symbols of the Passion, this one holding the titulus (the scroll) and the other angel holds the crown of thorns.

The one on the left, Angel with the Crown of Thorns (seen below) ... He looks annoyed, right? ... like maybe he'd rather be at his original location on the Ponte San't Angelo (bridge.)

There is a copy to replace him, on the bridge, while these two Bernini's are safe and sound in the church. The angels were donated by the Bernini family, forty-nine years after his death, in 1729. (Apparently, they lived in the neighborhood.)

Angel with the Crown of Thorns by Gian Lorenzo Bernini 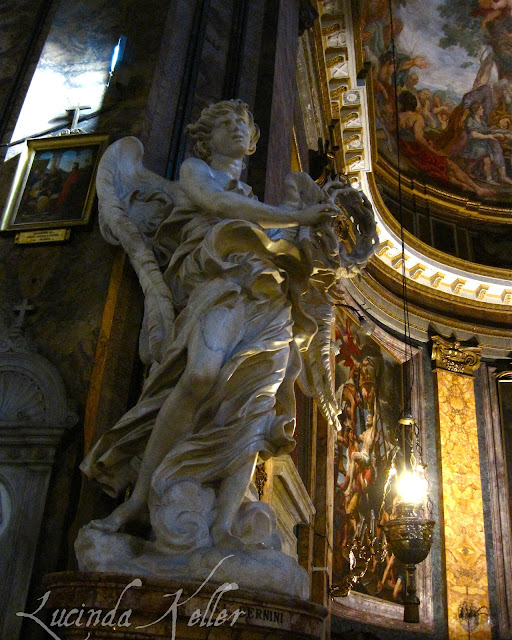 Anyway, am I right about his expression? He looks like a teenager having to go to a family reunion.


Feeding of the Five Thousand by Pasquale Marini 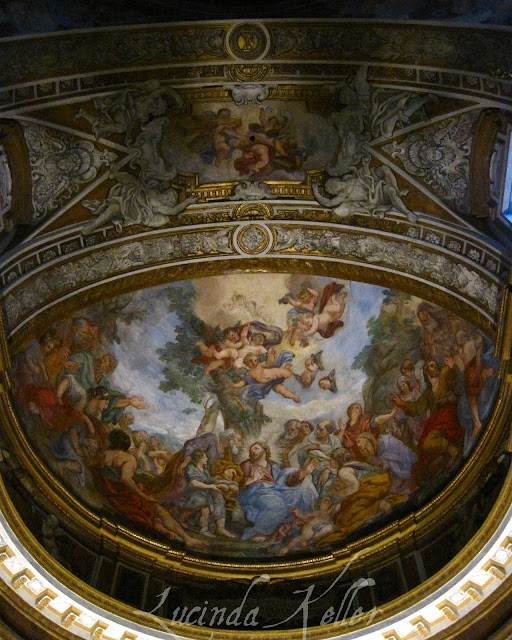 Make yourself familiar with angels
and behold them frequently in spirit;
for without being seen,
they are present with you.
~St. Francis De Sales 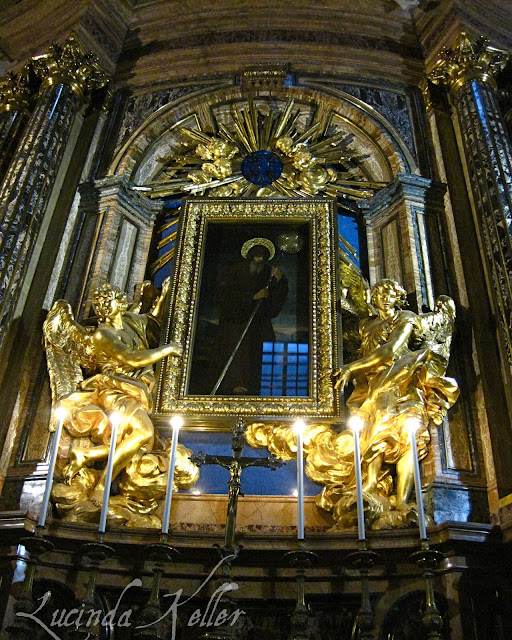 I fell in love with the painting, below, of Saint Joseph and the baby Jesus. It's so tender, and expresses such love in the face of Joseph, and in the glow of angels surrounding the babe.

On my trip, it was now December 1st and Christmas a mere 3 weeks away. It seemed somehow perfect to see this painting, on that day, as if to mark the beginning of my Christmas season ... in a beautifully, sweet way.

I ran back to the little postcard stand so I could take a little version of it with me.
The nun at the desk smiled at me, "It is beautiful, no?"
"Yes," I said, "so beautiful."

San Giuseepe e il Bambino (1732) by Francesco Cozza
The small portrait on the altar is St. Teresa of Lisieux 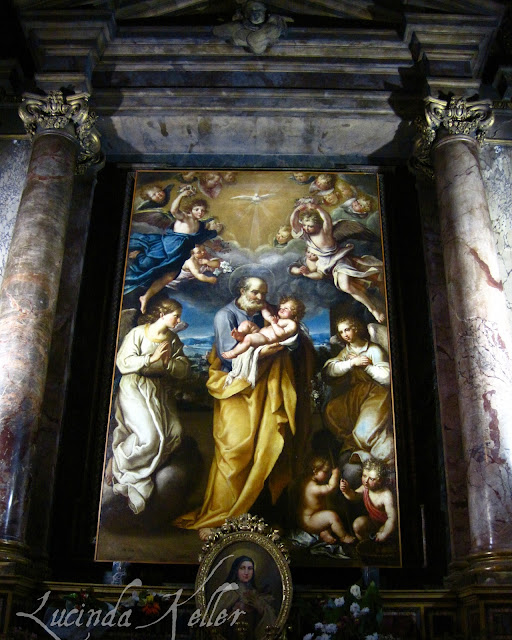 Lighting a candle is a beautiful ritual. It can create a sacred and profound moment. I think there is something in our spiritual DNA ... something that connects us, in a powerful way, to this simple but ancient act, that happens in many religious and spiritual traditions. Maybe we are tapping into our own past, or to the many who have come before us and stood at altars for the hundreds of years, praying for those they loved ... for the things they cared about.

Before going on my way, I lit two candles at the chapel of the Madonna of the Miracle, for my dear friend who'd lost her mother, just before I left on my trip. Somehow, it struck me as the perfect place to light a candle for them ... with Mother Mary. 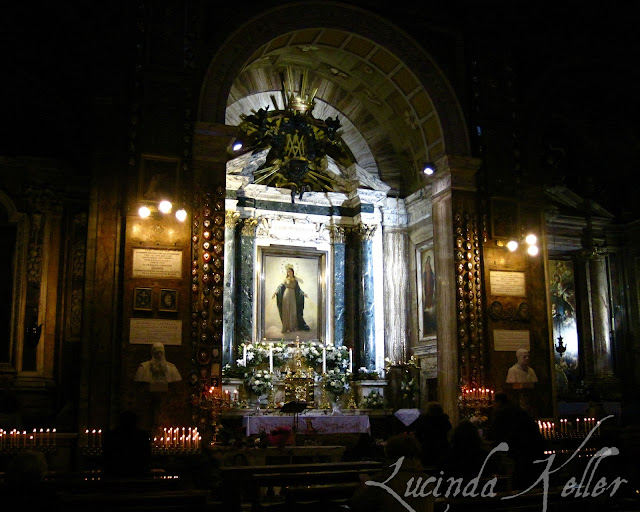 Love is how you earn your wings.
~Karen Goldman 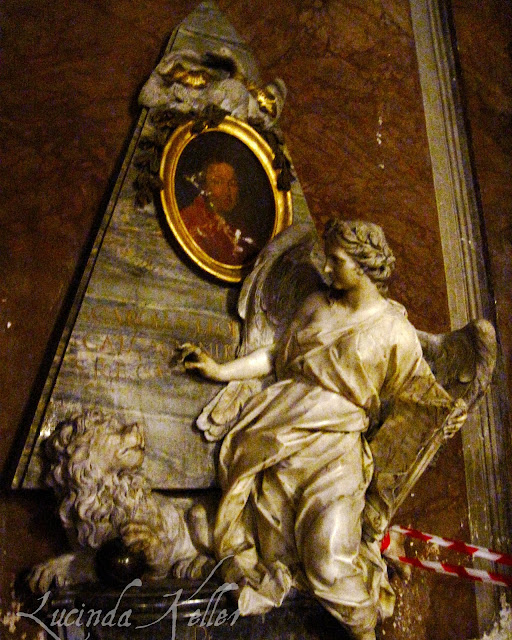 Another view of my favorite Bernini angel ... 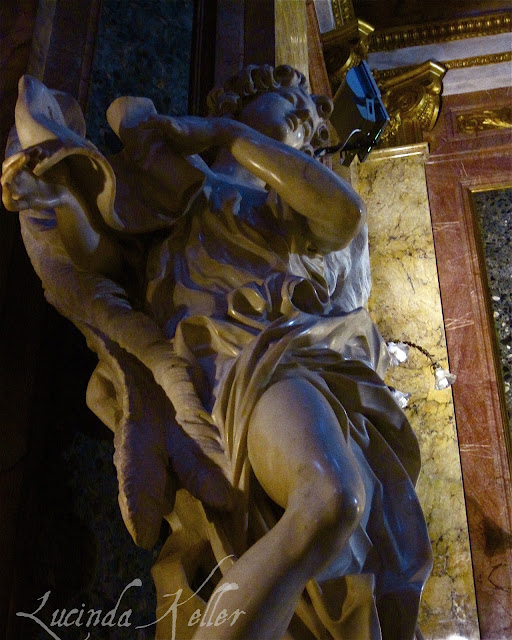 I was happy to have finally seen Bernini's angels, and the wonderful, accidental bonus, of the lovely and peaceful garden. Looking at the photos, I can still hear the rain and sound of the birds, hidden but singing in the trees. Maybe there was a guardian angel gently pushing me out the door and onto the cloister ... a little reminder that peace can be found, in unexpected places.

These things I warmly wish for you:
Someone to love, some work to do,
A bit o' sn, a bit o' cheer,
And a guardian angel always near.
~Irish Blessing

Hope you are having a lovely first week of March!
Blessings and light!

Bernini was incredible. Must have been an angel himself. We found a courtyard in Florence and looked for four leaf clovers. If someone watched us they probably wondered what in the world we were looking for.

I am completely bowled over by all the beauty. The angels are magnificent and that cloister looks like the perfect place to hide away from the bustle and chaos of the outside world.

Am really enjoying this trip to Italy...such magnificense and the music enhances the journey...thank you so much for putting it all together...

Donna~ looking for four leaf clovers in Florence sounds great! I'm afraid Bernini wasn't such an angel ... although I guess he reformed his ways later in life!

Loree ~ they are amazing (the cloisters) especially this one, with it's lush garden, birds and orange trees. So glad I found it!

Suzanna~ I am so glad you are enjoying the trip! It's fun for me to relive the whole thing and then get to share it as well! :)

Hello Lucinda, I've been to Rome several times, but reading and admiring your reportage is like going back again in that beautiful and unique city. Ciao!

Hello Lucinda, gorgeous pictures. So full of atmosphere. Thanks for sharing - have a great week ahead, Inge

What a wonderful set of shots! I especially like the statues against those glorious backgrounds.

I still can't believe someone could carve those images from stone! The feel of movement is stunning!
I could alsmost hear the sond of the rain on the marbel floors in the courtyard. I had a similar experience in Cordoba, Spain once early in the morning...truley magical!

Tito- you should go back, if you can! You will never run out of things to do in Rome!

Inge- thank you so much!

JM- thanks! You are right about the statues... The gold and marble are a magnificent setting!

Kerry- I know, Bernini definitely had an extraordinary gift! Glad you liked the Irish! (I've known a lot of Irish italian marriages so I thought I'd do it in a post!)