Life is an unfoldment,
and the further we travel
the more truth we can comprehend.
To understand the things that are at our door
is the best preparation for understanding
those that lie beyond.
~Hypatia
Greek, 350-415

I can't believe this was almost 3 weeks ago! Anyway, it was blazing hot and my friend Karen and I were looking for something fun to do and it just so happened there was a Greek Festival over the weekend in Pasadena ... which is where she lives! We waited until later in the day, because of the heat! 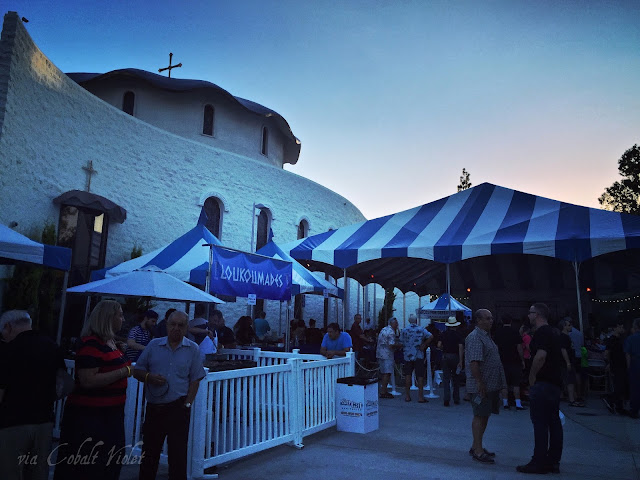 Turns out it's a fundraiser they do every year for Saint Anthony Greek Orthodox Church.

Here's a little music to listen to while at the Fest!

After we bought our tickets, we went in and could smell the grill! Yum! I don't eat much meat, but the lamb chops were amazing and too good to resist! Karen had a huge Gyro but I was extremely happy with my choice! 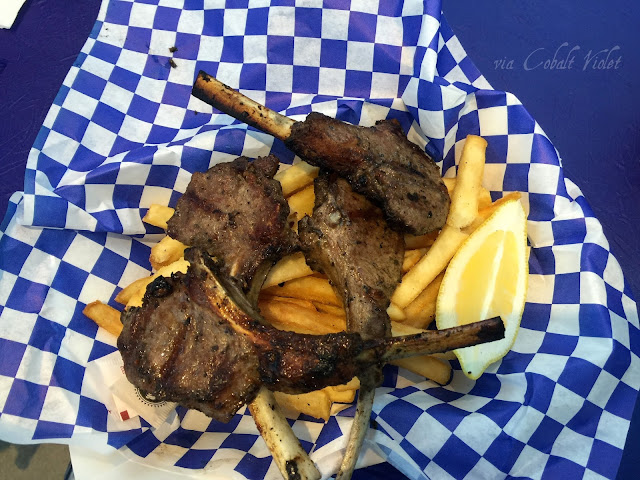 Not what we have
But what we enjoy,
constitutes our abundance.
~Epicurus 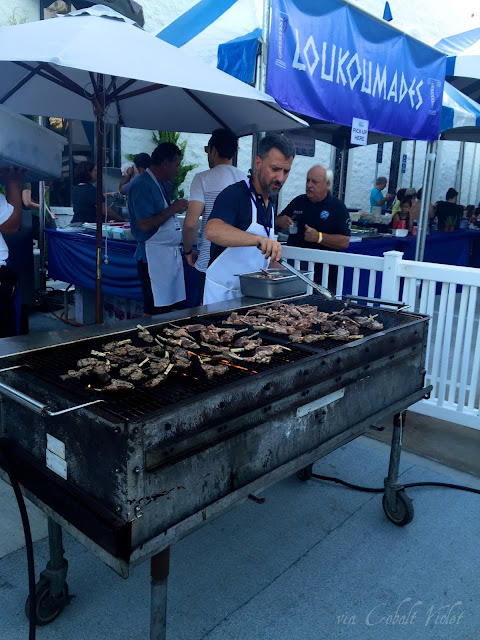 She had a mojito but I went with the special Greek Cherry Smash, which was vodka, soda, fresh lemon and imported Greek Cherries over ice. Yummy and very refreshing! "Gia' sou!" 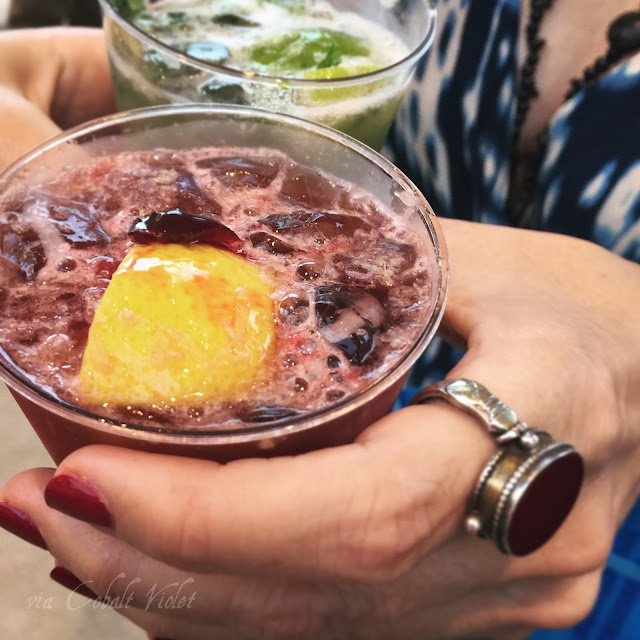 You can discover more about a person
in an hour of play
than in a year of conversation.
~Plato 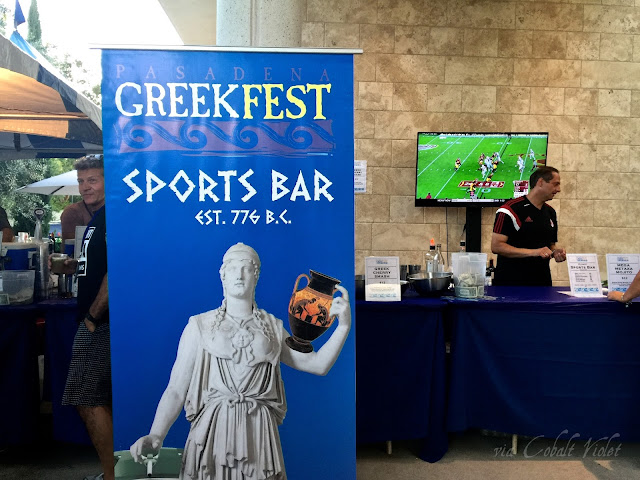 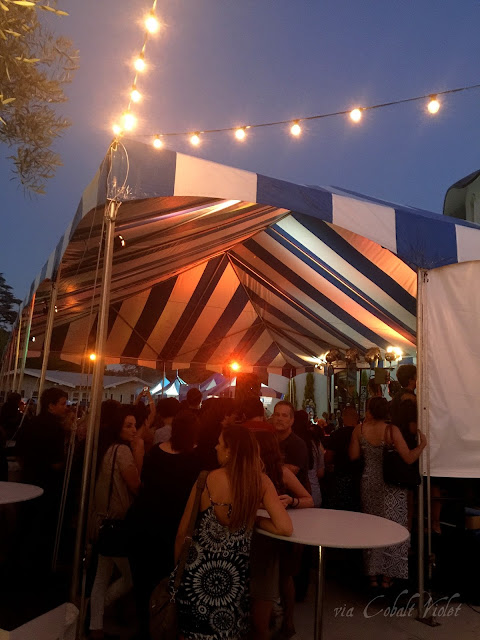 They had different dance groups of various ages, and different live bands play ... this shot below, was later and I think they were just folks from the church. So fun!
(No we didn't go out on the dance floor. They all knew what they were dong and it was so hot, even in the evening, that it felt like midsummer in Athens!) 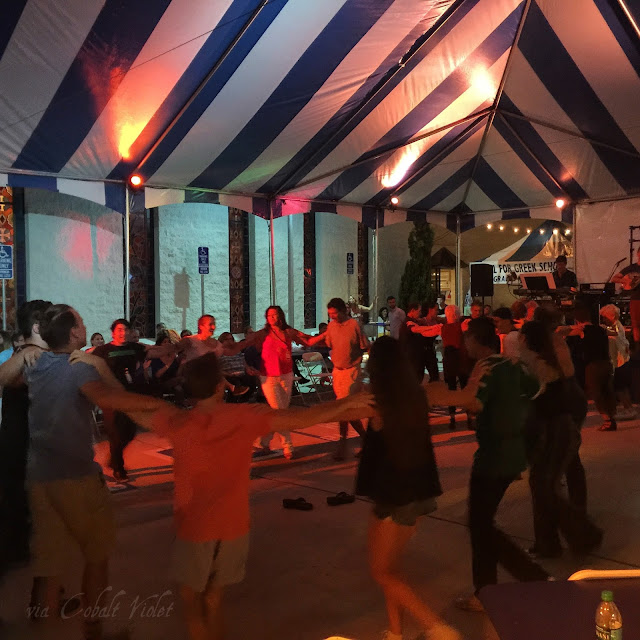 Music is a moral law.
It gives soul to the universe,
wings to the mind, flight to the imagination,
and charm and gaiety to life and to everything.
~Plato 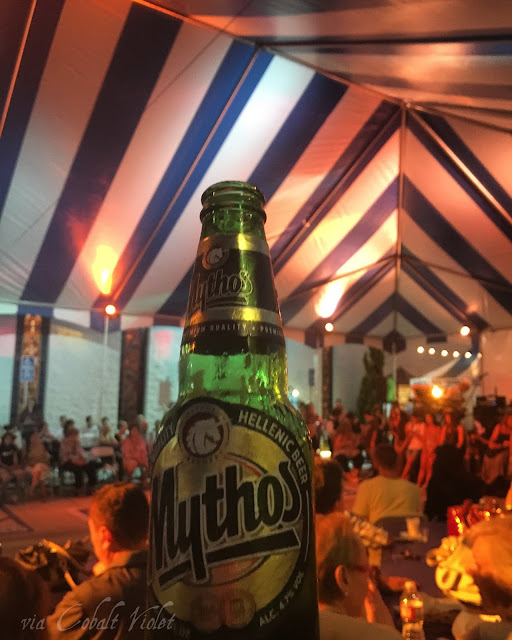 Our prayers should be for blessings in general,
for God knows best what is good for us.
~Socrates 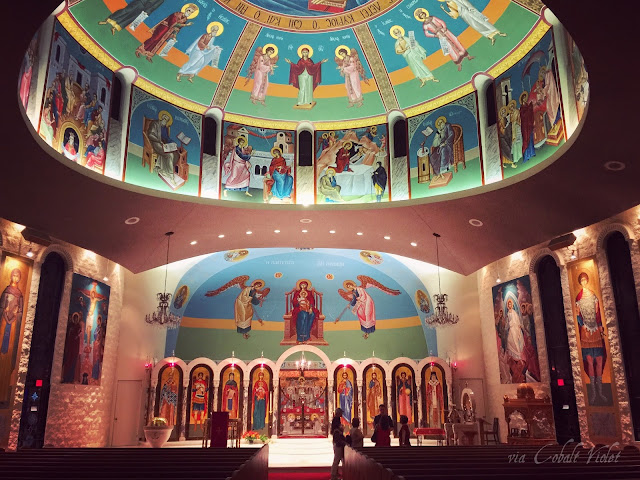 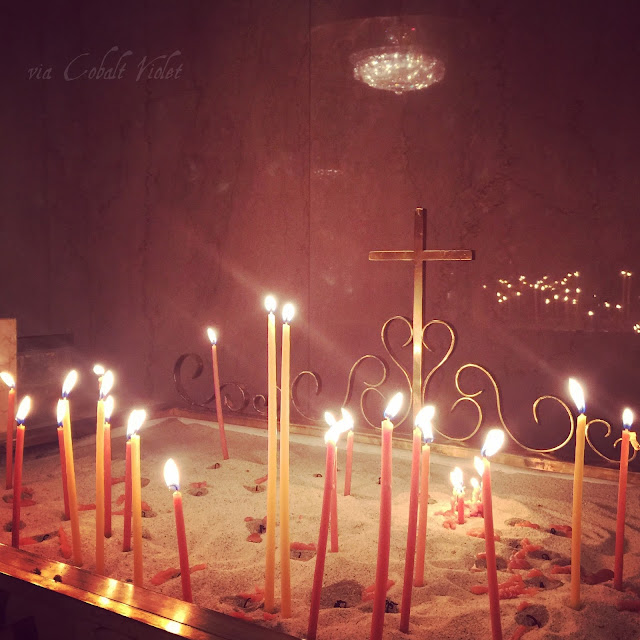 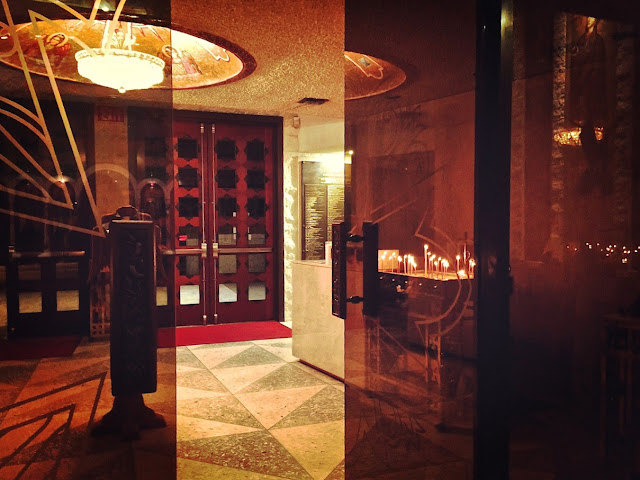 There was a guy with the church who gave talks about the church, the meaning of the symbols and icons, their faith, and the origin of the Church. Pretty interesting stuff!

The screen (Iconostasion), separating the nave from the sanctuary, with its full scale icon figures ... and in the sanctuary you can kind of see the mosaic of the Last Supper. 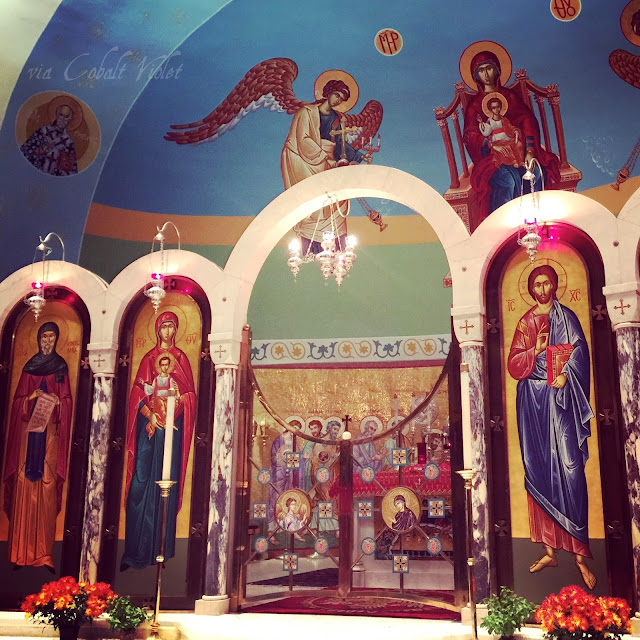 One who knows oneself, knows God:
and one who knows God is worthy to worship Him as is right.
Therefore, my beloveds in the Lord,
know yourselves.
~St. Anthony the Great
251-356 AD, Egypt 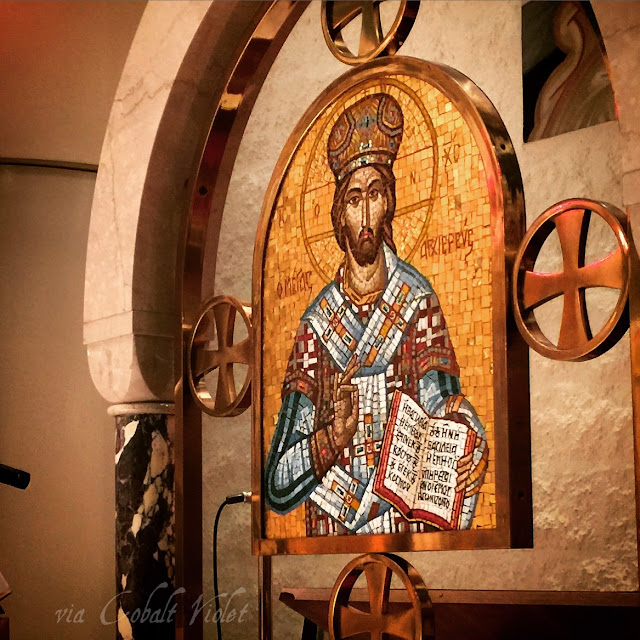 The portrait of Christ, in center of the dome, is in most Greek Orthodox churches. You can also see there are biblical scenes and folks from the old testament. 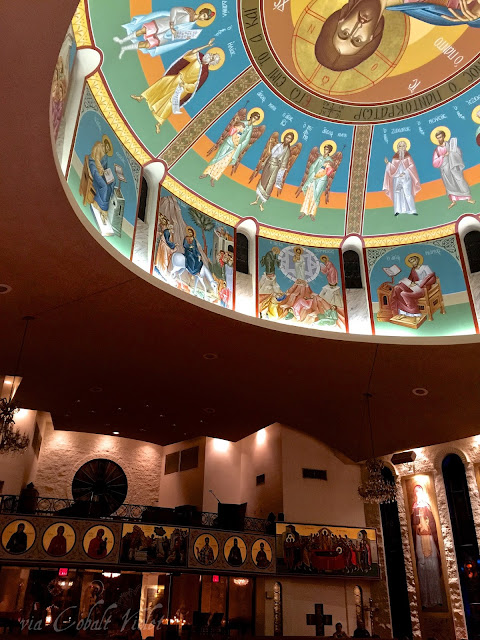 On the right side of the church (facing the altar) were icons of male Saints, and on the left side were all female saints which I thought that was pretty cool. 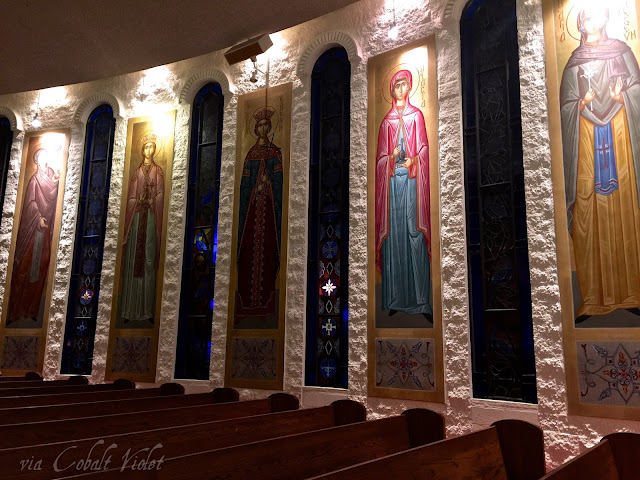 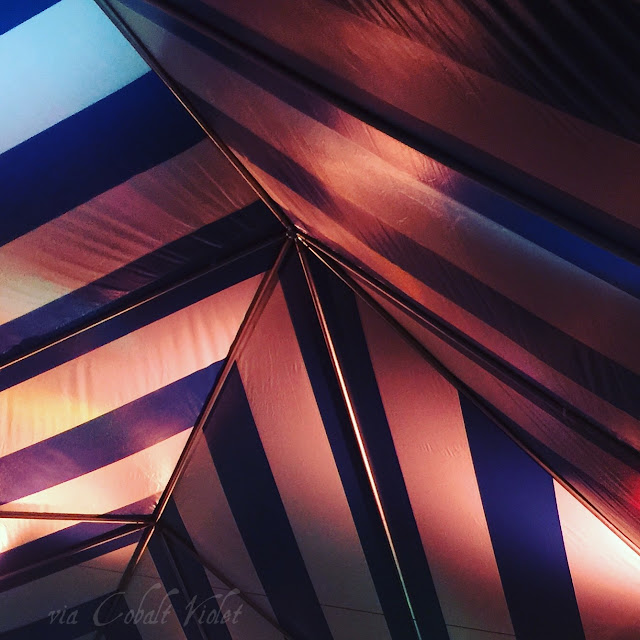 We grabbed a bunch of yummy Greek desserts involving lots of filo dough, nuts and honey! 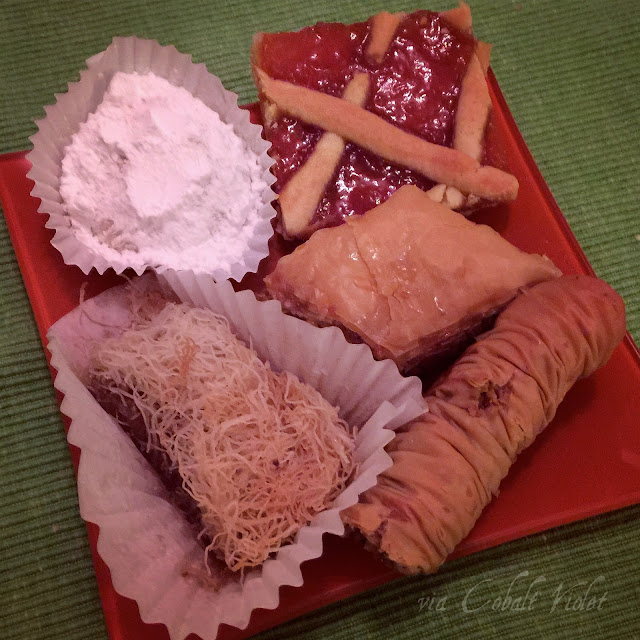 And, of course, I love to theme dress (even in subtile ways) so I wore the sandals my parents brought  back for me from Greece a few years ago, along with my blue and white dress! 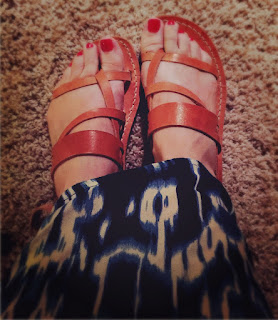 Karen and I, in her hood, at the Greek Fest! 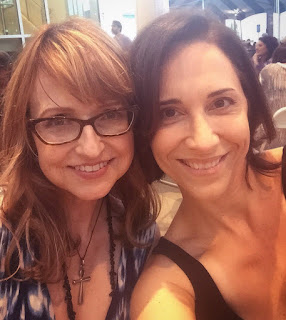 For more about Saint Anthony Greek Orthodox Church in Pasadena, the orthodox church, and as well as their Patron Saint, click here.

I'm now in need of a trip to Greece!

Of all the things which wisdom provides
to make us entirely happy,
much the greatest is the possession of friendship.
~Epicurus

That looks soooo fun.
Did you have any Metaxa brandy?
(A great tradition.)

It looks like you had an evening of fun and good food. Hope your weather has cooled down. Over here it's decided that we're finally heading towards autumn. Fingers crossed :) Thanks for your message over on my blog. Hope things start to look up for you.