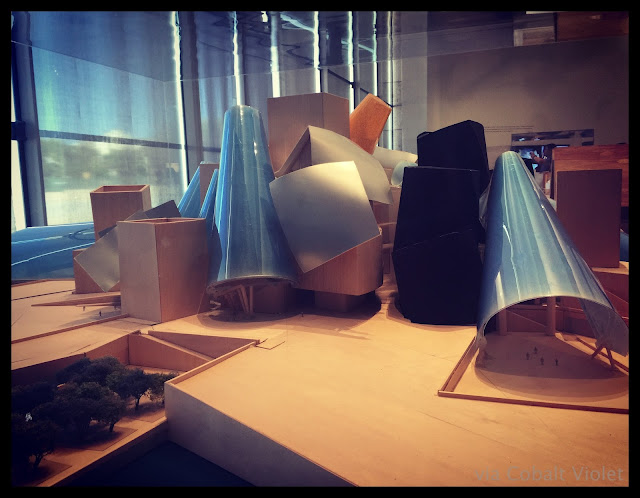 Not every person has the same kinds of talents,
so you discover what yours are
and work with them.
~ Frank Gehry 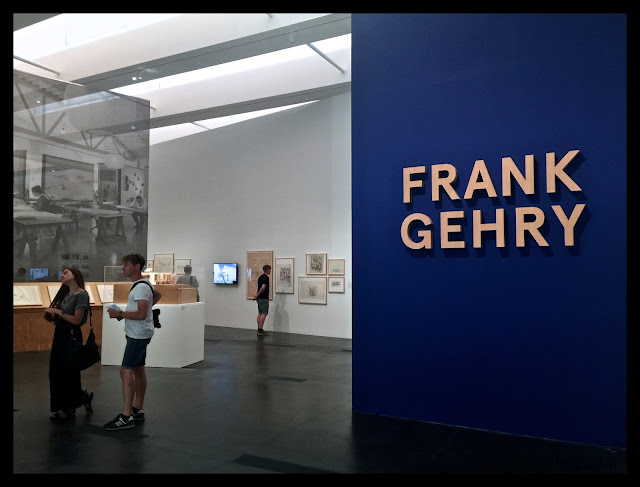 I wish I could start this post by saying that I have some vast knowledge of architecture and Frank Gehry. I mean, I do love the Disney Hall in downtown L.A. and looking at his buildings in photos, but I also just really love places with air conditioning in September!

Since LACMA is about 5 minutes from me and fits the bill, on all counts ... it seemed like a really good idea to head to the Miracle Mile and get out of my apartment, which was probably in the 90s.

I have to say, the Frank Gehry exhibition was much more extensive and interesting than I'd expected! In part, because it felt like being in a sculpture exhibition and somehow seeing these buildings in miniature was just really cool. So many of them are just beautiful! Anyway ... here goes! 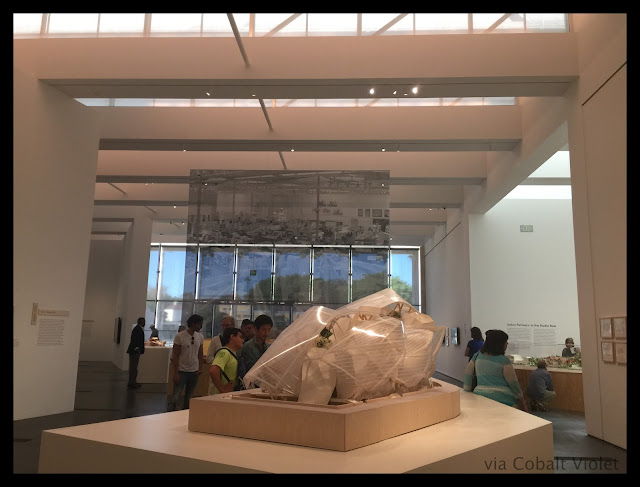 Above and below, an incredible model of the Louis Vuitton Foundation Building in Paris. (Art museum and cultural center.) I really want to see this one in person! 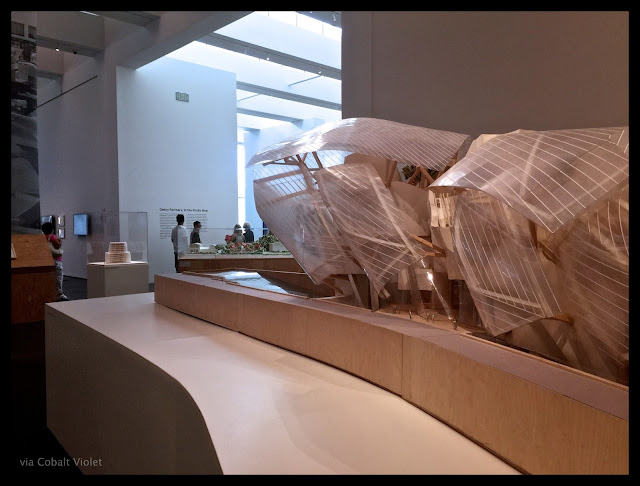 This video, below, has wonderful views of the finished building but it's in French, so if you can't speak french you can just fast forward it along. ;) 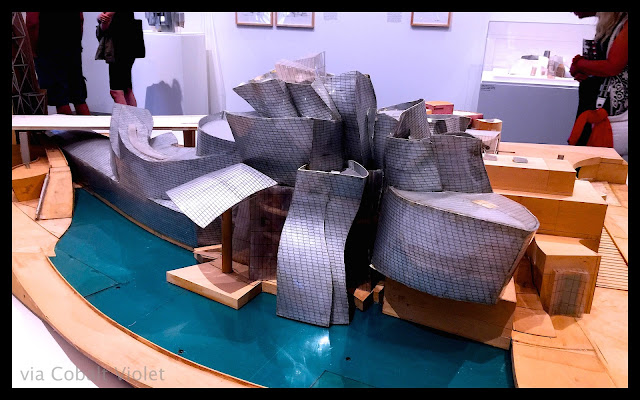 Here's a short documentary, in English (!) about the museum in Bilbao. 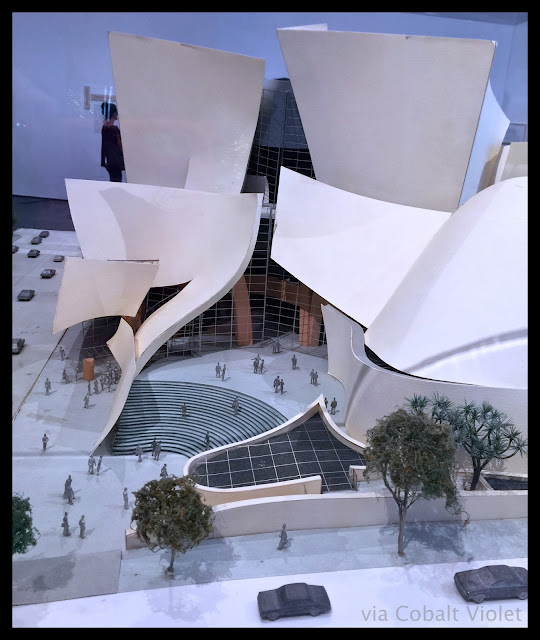 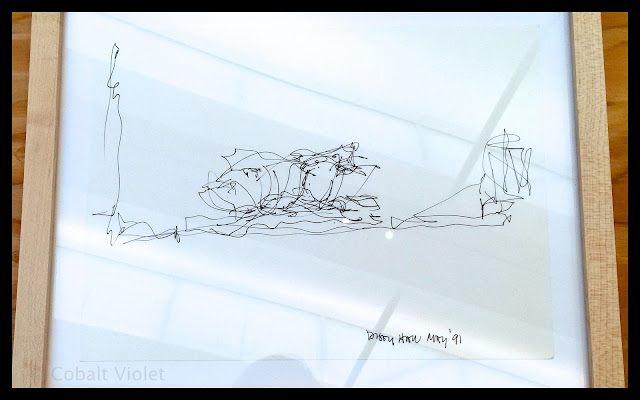 I know I draw without taking my pen off the page. I just keep going, and that my drawings I think of them as scribbles. I don't think they mean anything to anybody except to me, and then at the end of the day, the end of the project, they wheel out these little drawings and they're damn close to what the finished building is and it's the drawing ...
~Frank Gehry 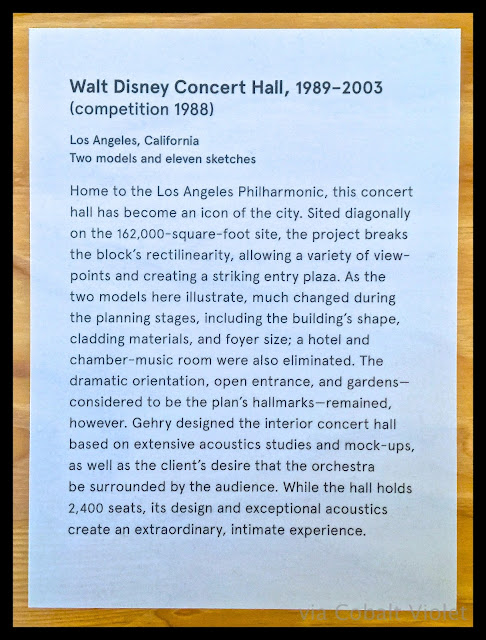 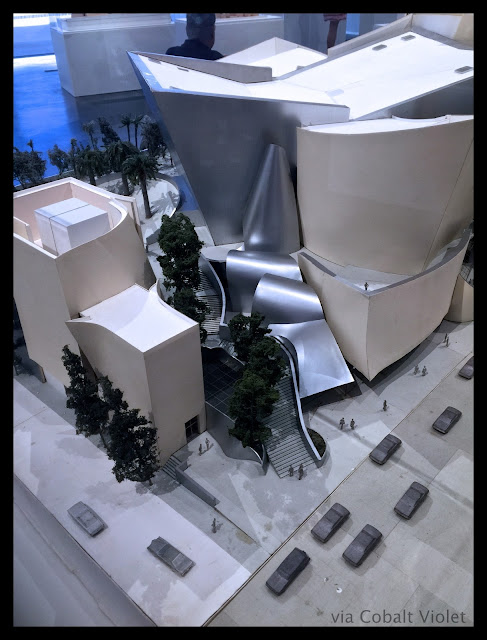 The best advice I've received is to be yourself.
The best artists do that.
~ Frank Gehry


There were screens up in the exhibition with photos of the finished buildings ... The screen below was showing the MARTa Herford Modern Art Museum, which opened in 2005, in Herford, Germany. 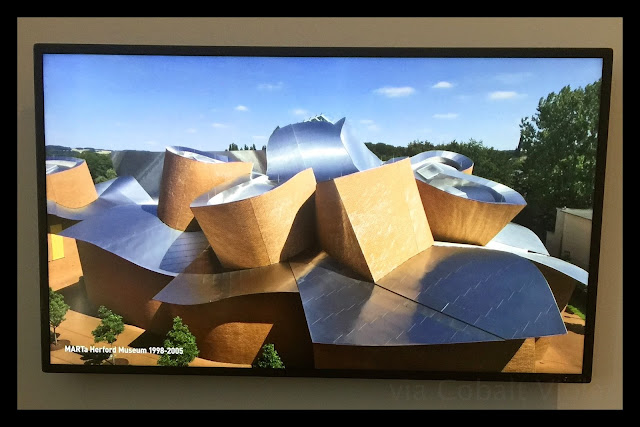 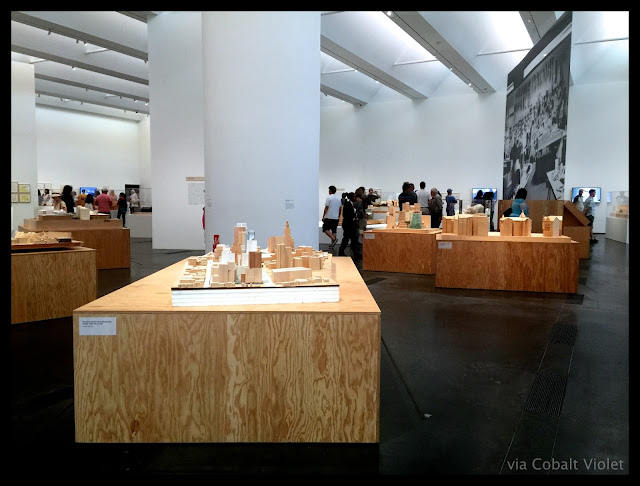 For me, every day is a new thing.
I approach each project with a new insecurity,
almost like the first project I ever did.
And I get the sweats.
I go in and start working,
I'm not sure where I'm going.
If I knew where I was going
I wouldn't do it.
~Frank Gehry

(one of my favorite models!) 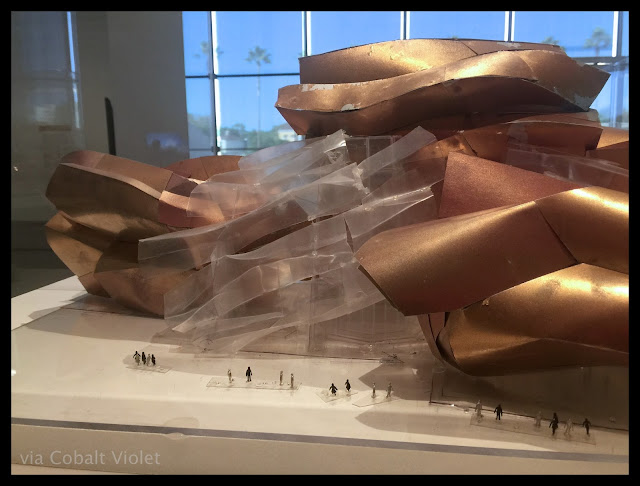 Creativity is about play
and a kind of willingness to go with your intuition.
It's crucial to an artist.
If you know where you are going
and what you are going to do,
why do it?
~Frank Gehry 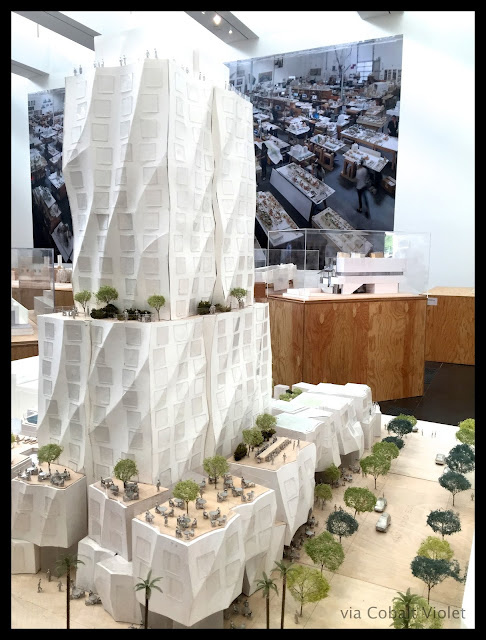 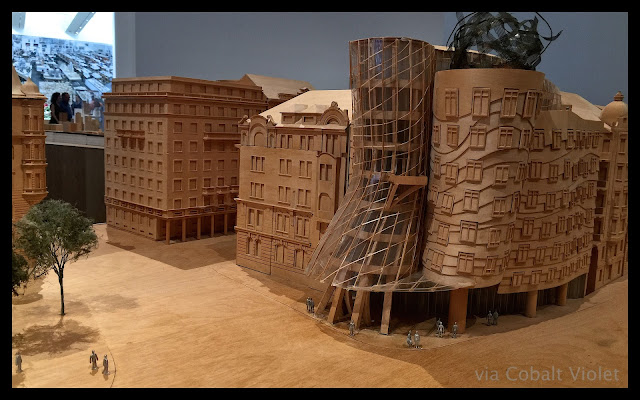 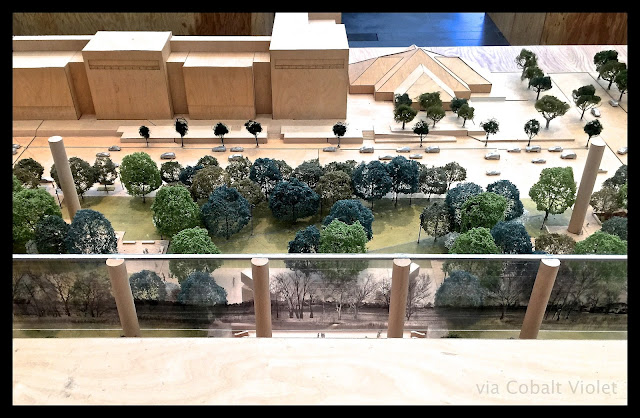 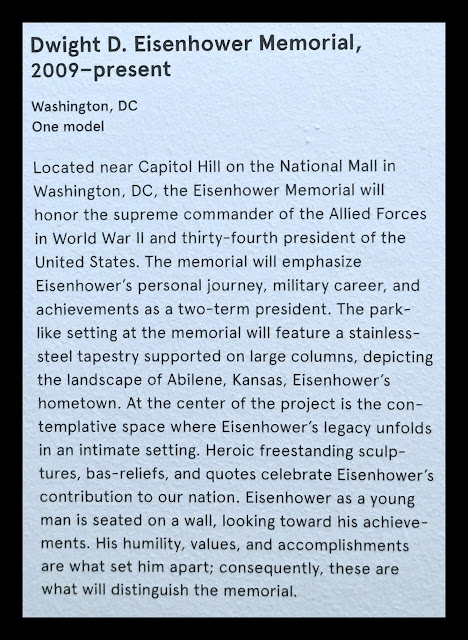 Architecture should speak of its time and place, but yearn for timelessness.
~ Frank Gehry 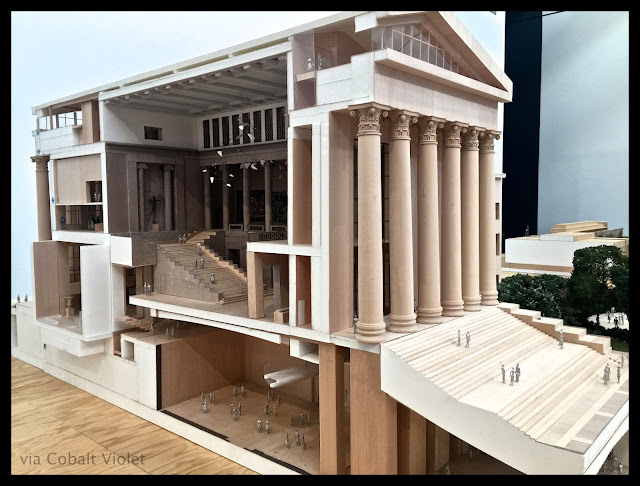 You can look anywhere and find inspiration.
~Frank Gehry 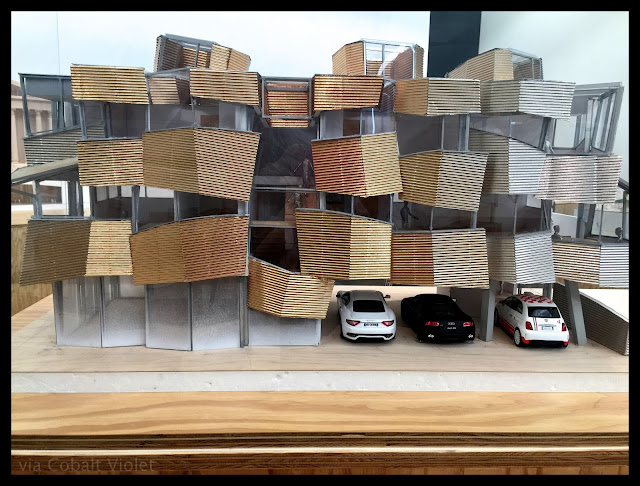 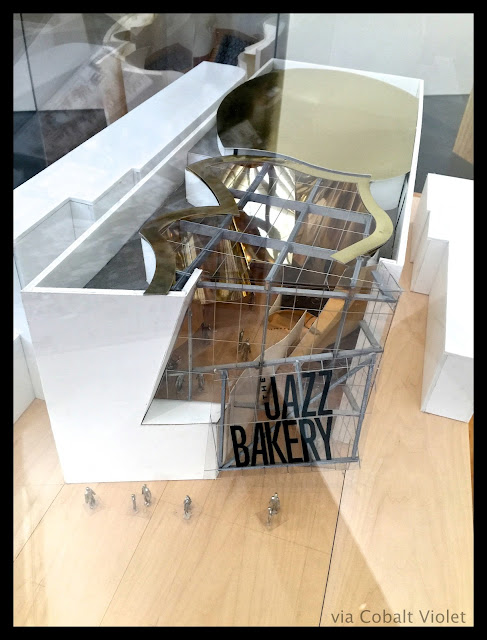 Liquid architecture.
It's like jazz - you improvise, you work together,
you play off each other, you make something, they make something ...
~ Frank Gehry 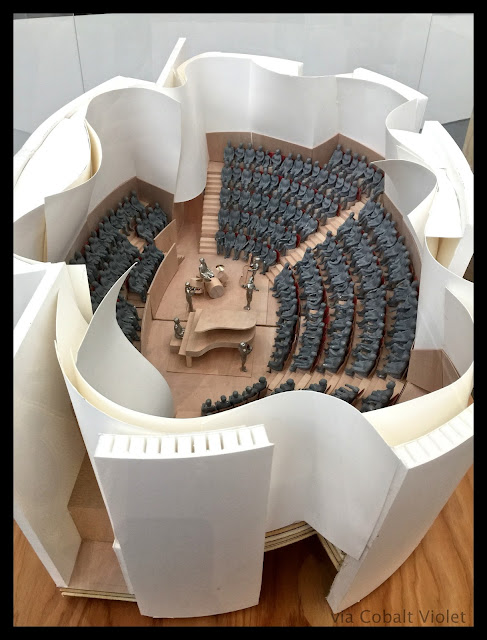 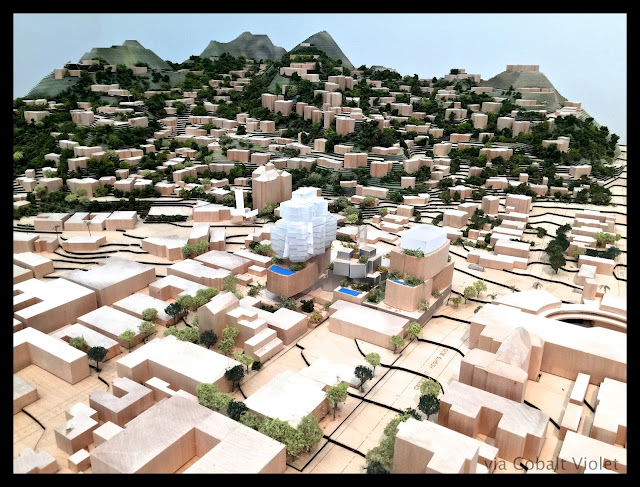 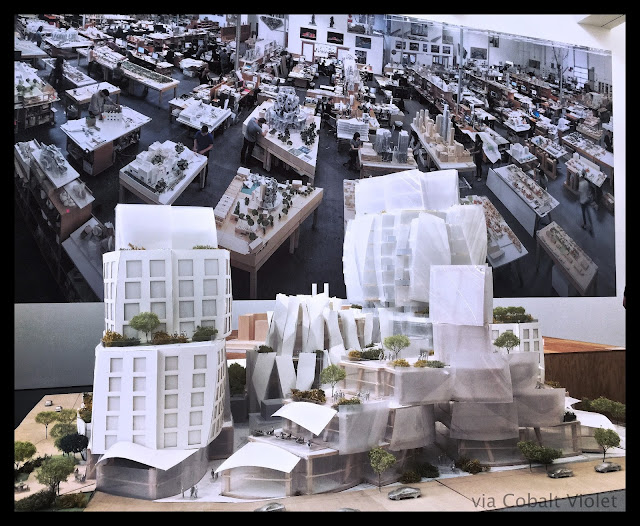 I love that Gehry (based in LA) has so many projects in progress in the L.A. area! This Sunset one, above, the apartments in Santa Monica, the Jazz Bakery, the Beach House in Marina del Ray, and I think there were another couple of residences, as well.

Your best work is your expression of yourself.
Now, you may not be the greatest at it, but when you do it,
you're the only expert.
~ Frank Gehry 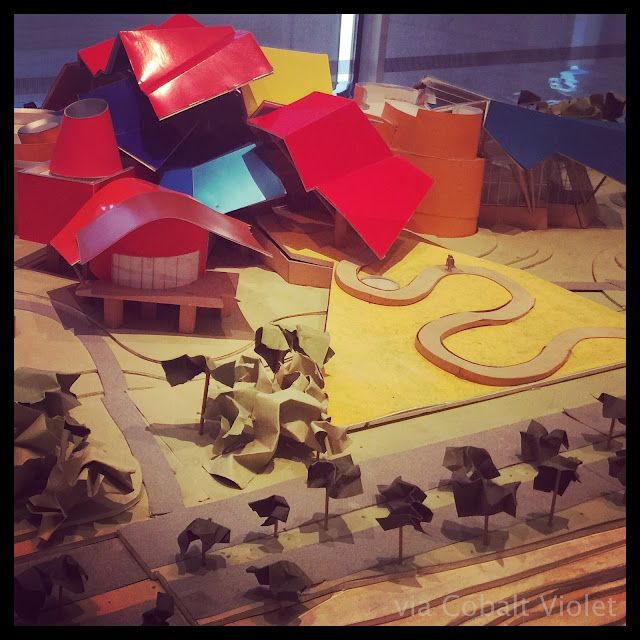 This is the full documentary on Frank Gehry done by the late Sidney Pollack, in 2007. It was actually playing on a screen inside the exhibition at LACMA. And you can watch it right here! ;)


For some great photos of the LV Building ... Louis Vuitton Building

The message I hope to have sent is just the example
of being yourself.
~Frank Gehry

Abu Dhabi looks like someone just put their trash out on the street.

Oh Lucinda, what a life you lead. I thought the little drawing was one of his. Thank you for your kind words and stopping by. Love his designs. Wouldn't want to have every building looking like a cathedral.

(VIDEO) Want your ex CRAWLING back to you...?