The High Sierra and a Japanese interment camp

Many paths lead from the foot of the mountain,
But at the peak
We all gaze at the
Single bright moon. 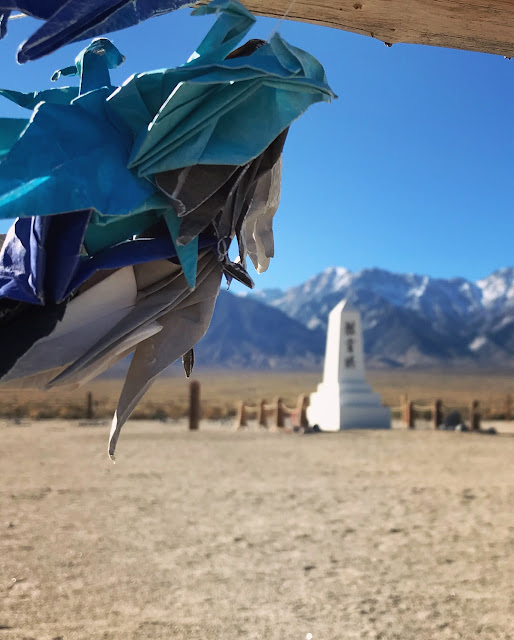 "The first internment camp in operation was Manzanar, located in Southern California. Between 1942 and 1945 a total of 10 camps were opened, holding approximately 120,000 Japanese Americans for varying periods of time in California, Arizona, Wyoming, Colorado, Utah, and Arkansas."  ~ Encyclopedia Brittanica

"In 1942, the United States government ordered more than 110,000 men, women, and children to leave their homes and detained them in remote, military-style camps. Manzanar War Relocation Center was one of ten camps where Japanese American citizens and resident Japanese aliens were incarcerated during World War II."  ~ National Park Service Website 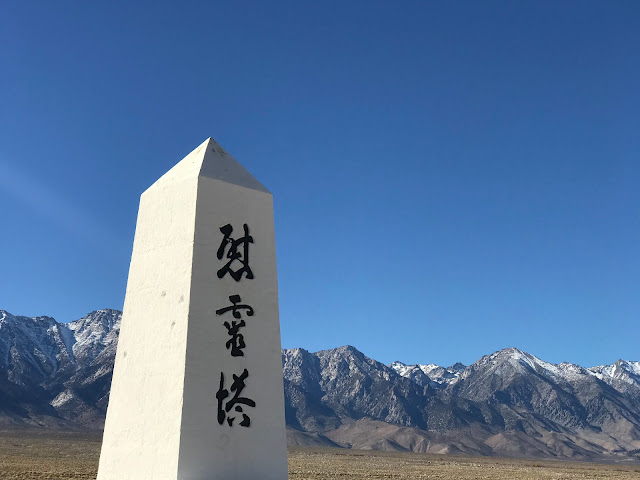 “We had about one week to dispose of what we owned, except what we could pack and carry for our departure by bus…for Manzanar.”  William Hohri

I can't believe this visit was a year and a half ago.

It was a beautiful clear December day in California's High Sierra. I went up there for my birthday with my boyfriend, Kevin. It had been almost 3 months since my big Scotland and Italy adventure, and in that time I had gone back to work, gotten back into my groove, and continued my long distance relationship with my boyfriend. He was living in Hawaii and had come out for Thanksgiving and my birthday that year. 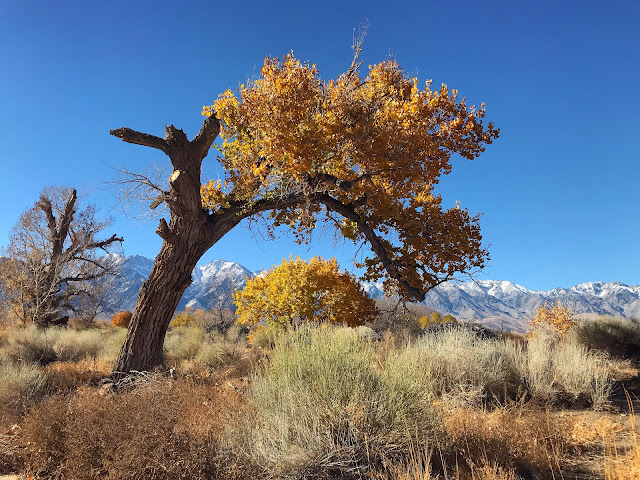 Kevin spent many years living, raising a family, and working at Mammoth Mountain Ski Resort on the Race Department as an Alpine Ski Coach. He needed a visit with his grandkids and we wanted to ski so we decided to head north for my birthday weekend. He wanted me to see the WWII Japanese interment camp, Manzanar, that is just off Highway 395, near Lone Pine, CA. I had driven on that road so many times as a kid and I don't remember ever seeing it. 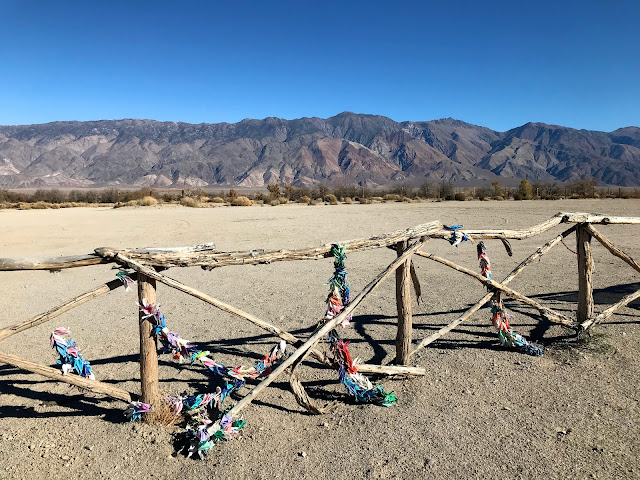 There are so many things I could say about the place but I don't know where to begin. There is this incredible natural beauty surrounding something that represents such a sad time in our history. And frankly, there seemed to be an empty melancholic energy there. It's a strange juxtaposition.

There are so many people who experienced Mazanar first hand, during the war, who can express its history better than I. There are loads of documentaries worth watching on this subject. I'm adding a link at the bottom of this post to an article that mentions 10 of them that you can watch online for free. 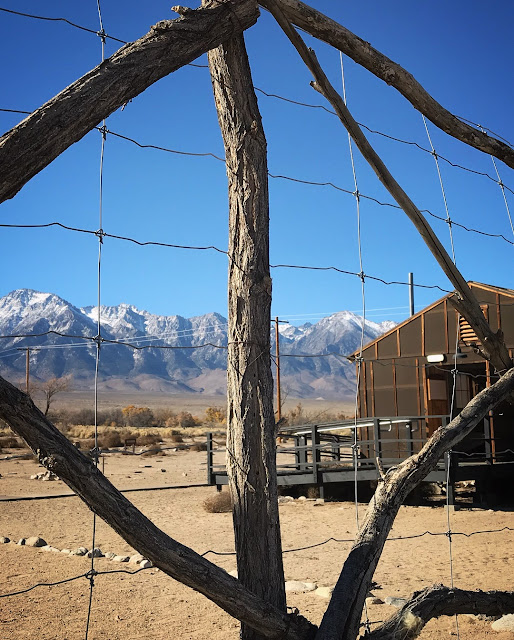 A year and a half ago I was trying to imagine how they could have put innocent people, especially children, behind wire and fences. Fear makes us rationalize all sorts of things and the human race does it over and over. At its worst fear becomes hatred, violence, and racism. Are we doomed to repeat the past over and over?

"About two-thirds of all Japanese Americans interned at Manzanar were American citizens by birth. The remainder were aliens, many of whom had lived in the United States for decades, but who, by law, were denied citizenship.
The 500-acre housing section was surrounded by barbed wire and eight guard towers with searchlights and patrolled by military police. Outside the fence, military police housing, a reservoir, a sewage treatment plant, and agricultural fields occupied the remaining 5,500 acres. By September 1942 more than 10,000 Japanese Americans were crowded into 504 barracks organized into 36 blocks.
Coming from Los Angeles and other communities in California and Washington, Manzanar’s internees were unaccustomed to the harsh desert environment. Summer temperatures soared as high as 110ºF. In winter, temperatures frequently plunged below freezing." 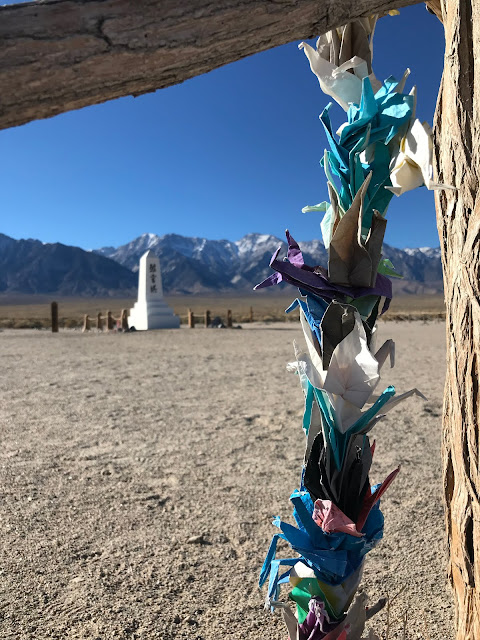 ... Compassion without wisdom is not understood
to be true compassion,
and wisdom without compassion is not true wisdom.
~Masao Abe
1915-2006 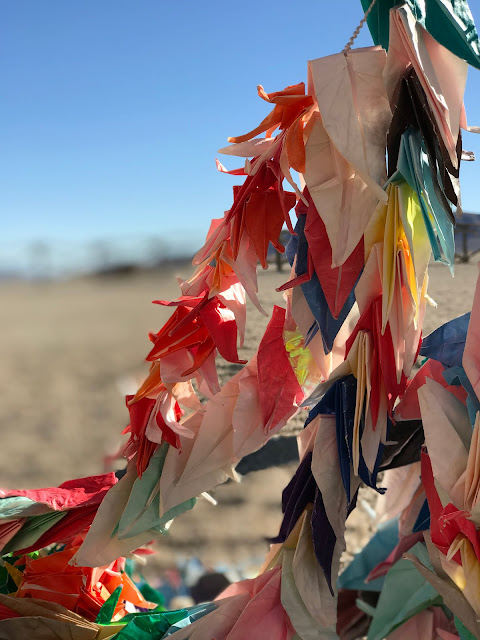 We arrived in Mammoth that evening and our spirits were lifted by watching Kevin's adorable granddaughter Rylie in her ballet class and being able to breathe in the crisp clean air. There were fires raging in our home town of Ventura where we still have many friends and up in Ojai where my family lives. Many, including my parents and my sisters family, had to evacuate. Sadly, my Aunt Cheri and Uncle Larry lost their beautiful home to the fire but we are so grateful everyone was safe!

There was a cloud of smoke hanging over Los Angeles but it was nothing like the smoke in Ventura County in the path of the Thomas Fire. 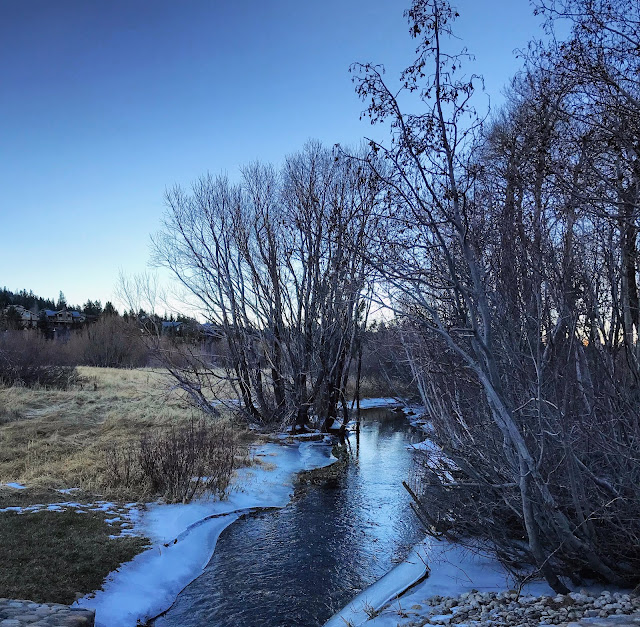 You can almost breathe the clear air looking at the photos! 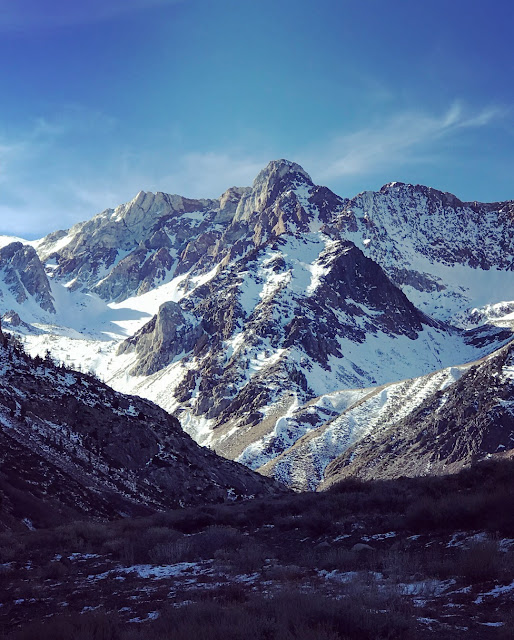 Mount Morrison & Convict Lake
An unfortunate name for such a beautiful place because escaped convicts ambushed and killed General Robert Morrison and members of his posse in 1871 at this scenic location! 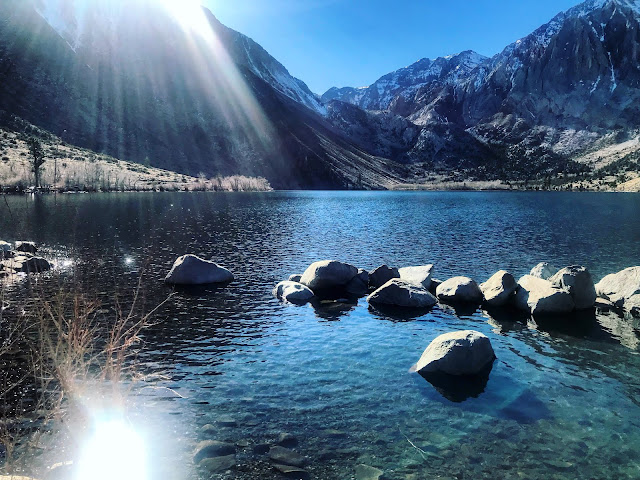 Here's a little sketch from the Main Lodge sundeck... 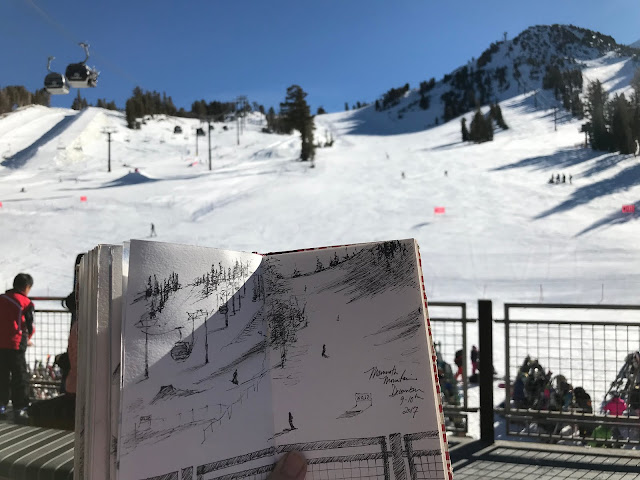 Here's a fun little video of my first time on skis in 20 years! 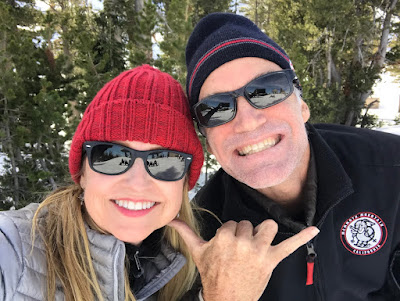 “If your mind is empty,
it is always ready for anything,
it is open to everything.
In the beginner’s mind
there are many possibilities,
but in the expert’s mind there are few. ”

I was cracking up at Kevin. He was so excited that I made it down "Hanzel and Gretal" without falling. Another highlight of the weekend was a dip in the natural hot springs by the light of the silvery moon!

There are several natural hot springs in the area but sorry no nighttime hot spring shots to share! 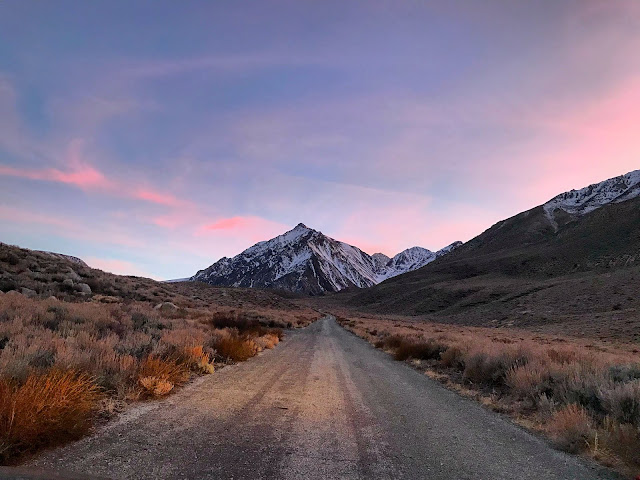 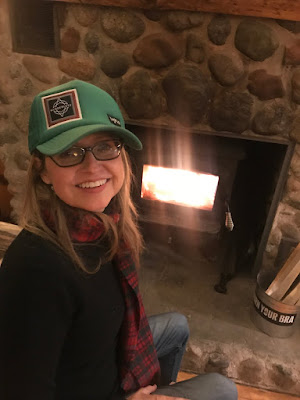 It was very cozy amongst the Aspens and I was very happy to have a fire to thaw out my tootsies. 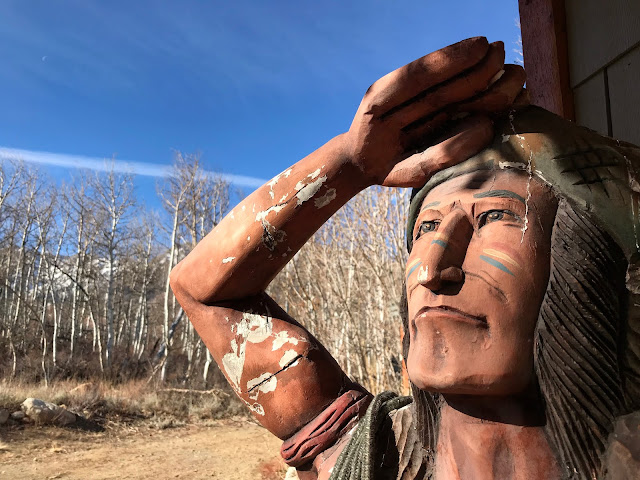 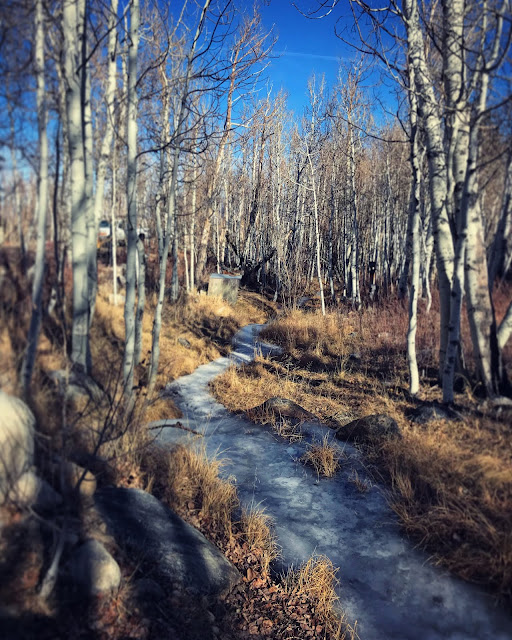 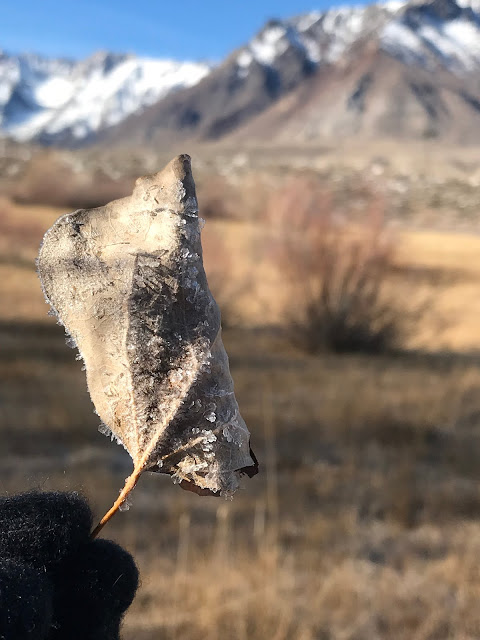 You cannot separate any part from the whole:
interdependence rules the cosmic order. 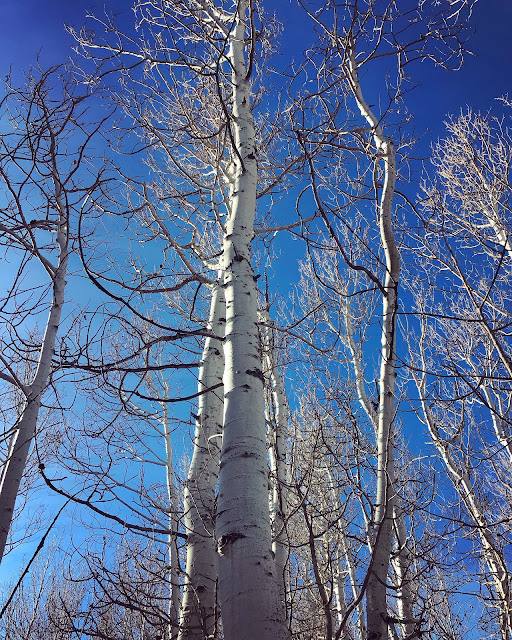 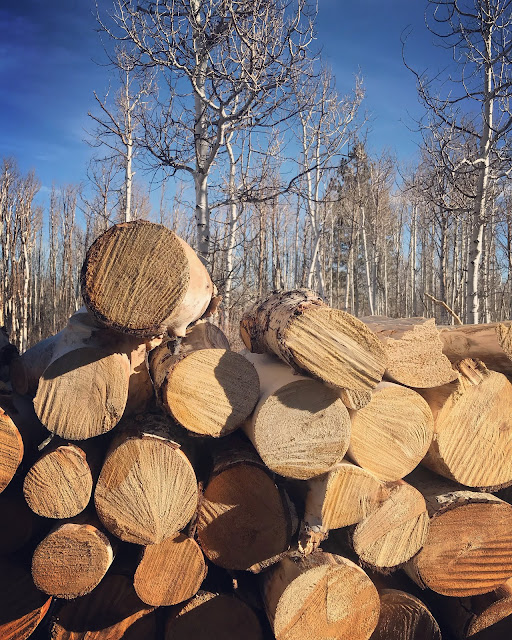 Did I mention Kevin is a yogi? I think his friend's pup appreciated his downward facing dog! 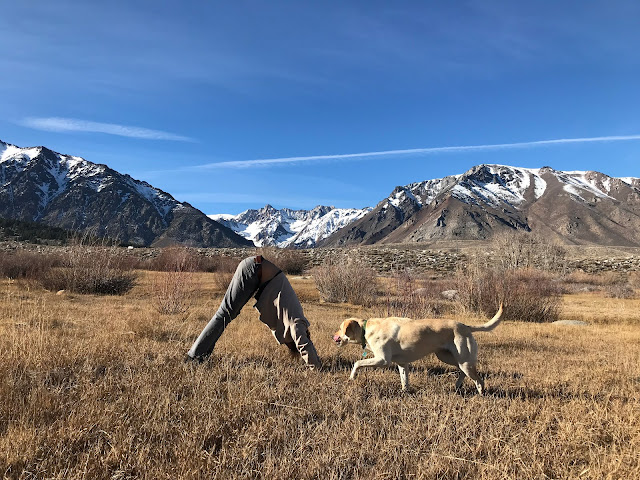 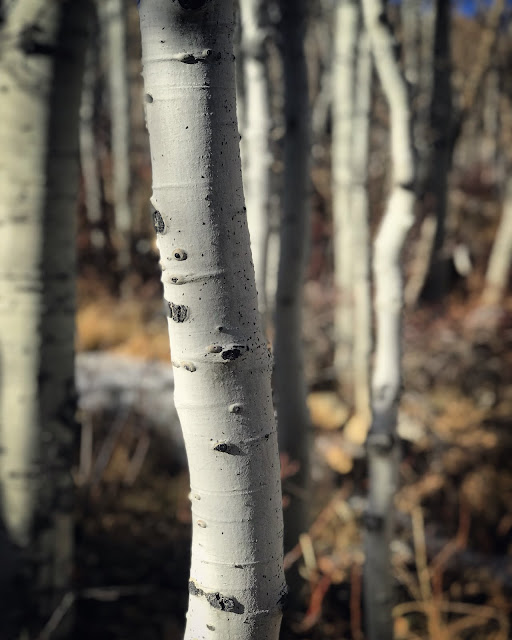 I feel so lucky to live in California.

I hadn't been up to this area in so long. I forget how completely different the landscape is and what a gorgeous drive Highway 395 is through the High Sierra. This road trip is about 5. 5 hours north of Los Angeles or a 3 hours drive south from Reno. 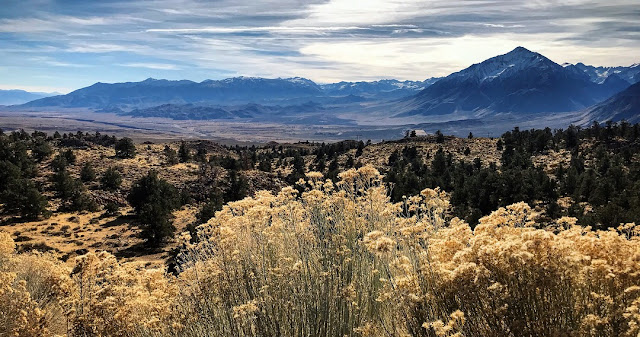 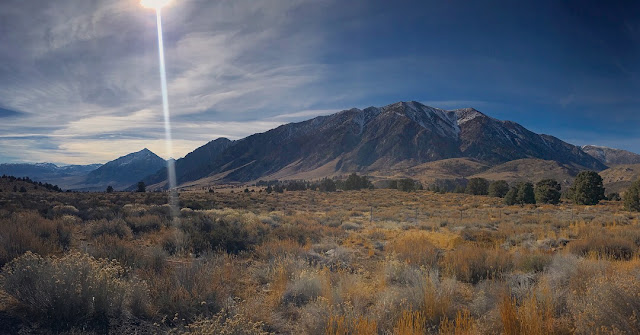 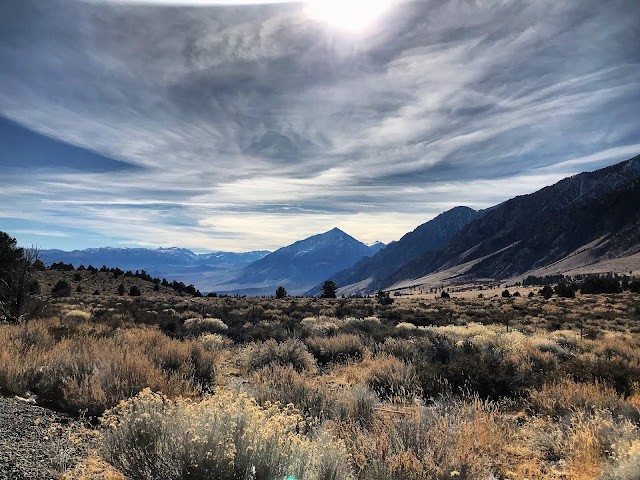 For my Christmas present that year Kevin bought me a ticket to Hawaii. It might have been my biggest travel year since I was 20! He said I was his Christmas present but I think I got the better end of the deal! After spending Christmas Eve and morning with my family I jumped on a flight and headed to the North Shore of Oahu.

I went a little nuts taking photos of Hawaii but I have to say I also managed to do a lot of watercolors and drawings. That's all coming up next!

I hope you are all having a lovely summer and finding a way to stay cool! I'm sending you all much love and prayers for nice cool breezes!

What a gorgeous, peaceful place. I love mountains and am awed by their majesty. It looks like you and Kevin had a terrific time.