After being at the Greccio Sanctuary we headed to the town. It was, of course, charming with a lovely little town square but we were very hungry and the place looked deserted. This might have had to do with the rather grey weather and occasional showers.
I was so hungry I was ready to chew my arm off so Mauro suggested this little restaurant in Contigliano between Greccio and Fonte Columbo, which was our next destination. The outside of the building said "Ingresso" but the business card says "il Giardino." The family was eating lunch in this little open room toward the entrance but the waiter lead us to a banquet room. We were the only ones there. The chairs had white slip covers with bows, as if they were bridesmaids at a banquet and I didn't know what to expect.
That's the funny about traveling, you never know. I ate more during that meal than I normally eat over the course of three days. We had some of the best antipasti of my life (what do they do to the mushrooms? Sprinkle them with fairy dust?!) And I am still trying to figure out what they were calling bread crumbs on the grilled zucchini and eggplant. There were giant plates of fabulous homemade pasta with truffles and salad and steamed dark greens ... I couldn't move.
From what it looked like, they do banquet-style meals there. Can you imagine? You'd have to put me in a wheel barrow to get me out of there.
Greccio, May 2010 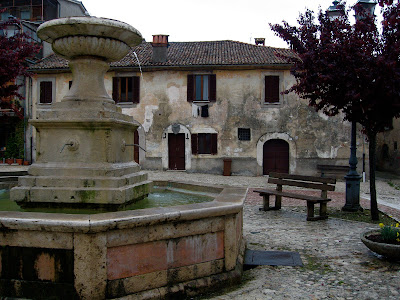 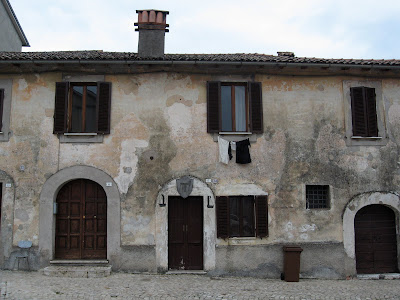 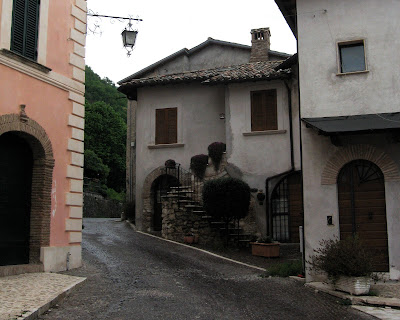 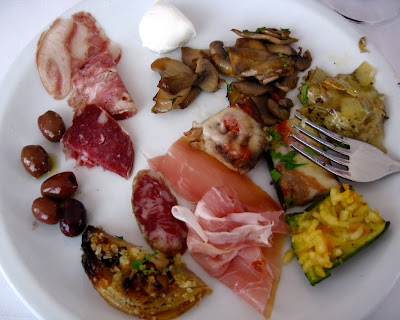 Mmmmm ...
Up next ... peaceful and sacred Fonte Columbo
Posted by Cobalt Violet at Wednesday, June 16, 2010

Oh my gosh what a gorgeous looking place. I am sure I would have eaten and eaten too.

Such a dazzling post...so beautiful.you always transport me straight there, magical! Glad you didnt chew your arm off ha ha!! Gorgeous writing and beautiful photos..eye candy for the soul!
Kiki~

That looks delicious. Mmmmmmm...and anything I ever ate in Italy was. Thanks for taking me back...

The antipasti is a veritable feast!

Mmmmmmmmmmmm indeed.
The Italians sure know how to cook.
Just looking at that photo it made my mouth water.
Damn,know i have to assault the fridge !!!
O.K.,O.K. I HAVE TO FIGHT THIS ! -I´m thinking pure thoughts, i´m thinking about pink clouds, and little flowers and birdies,and ham and bacon and pasta, NOOOOOO !!!
;)

Lordy! Now I'm really hungry and not a bistro within 30 miles! What a fantastic experience. You are so right about travelling...you never know!

Thanks guys! Sorry to get the appetites going ... happens every time I go on food blogs! I end up raiding the refrigerator!