Dressing up for Halloween ... and a little All Souls Night

I always loved dressing up. Who am I kidding? I should use the present tense! I love dressing up.
The thing is though, that Halloween is just another excuse to dress up. Growing up, there were many a theme party that my grandmother gave, as well as plays, various singing performances ... you know, a Tuesday afternoon in July, in fishnets, channeling Liza in Cabaret ...
I generally liked being something glamorous or at least semi-attractive, whereas my much cooler older sister, didn't mind being something completely creepy and weird. Though I admired that about her, glamour was still my go-to objective, even as a spider.
This was the year I read Charlotte's Web
... and my sister was a very creepy Hunchback of Notre Dame (Not sure how she came up with that since she was pretty young and it was pre-Disney version) 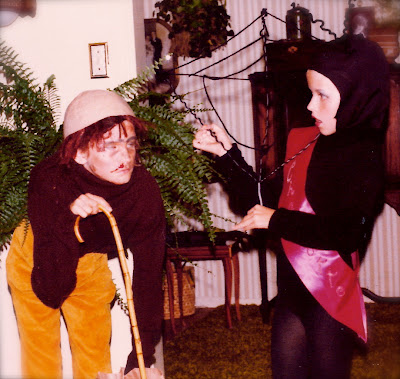 My Mom made our costumes, most of the time, or we'd take some old costume from my grandmother's closet and rework it. Back in the day, studios like MGM would have big sales where they'd dump old costumes and my grandma would pick things up for a bargain. Dress up at her house was really fun!
One year I wore an old, faded chiffon, chorus girl costume from Singing in the Rain and was a ghost. It was from the "Beautiful Girls" number in the film and had turned from the original blue to a nice faded grey. Perfect for a ghost! I powdered my wild curly hair and face and did a powdery blue around my eyes. (see? still glamourous.)
Anyway, here are my sister Penny and I on one Halloween, in the entryway of our old house in Ventura. As you can see, I was a huge I Dream of Jeannie fan! (costumes by Mom) 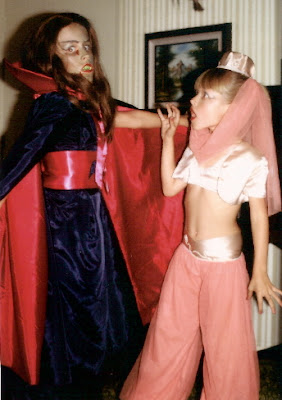 Hope whatever you are doing, glamorous or scary, you have a safe and Happy Halloween!
I will be dressed as a witch (you know, a glamorous Stevie Nicks version! ;) and going to Italian class. I will also be trying my best to avoid the West Hollywood traffic jam I somehow find myself in for hours every year! We'll see if I succeed!
Please enjoy a bit of the mystical beauty of Loreena McKennitt and "All Souls Night"
Bonfires dot the rolling hillsFigures dance around and aroundTo drums that pulse out echoes of darknessMoving to the pagan sound.
Somewhere in a hidden memoryImages float before my eyesOf fragrant nights of straw and of bonfiresAnd dancing till the next sunrise.
I can see lights in the distanceTrembling in the dark cloak of nightCandles and lanterns are dancing, dancing, dancingA waltz on All Souls Night.
Figures of cornstalks bend in the shadowsHeld up tall a the flames leap highThe green knight hold the holly bushTo mark where the old year passes by...

Loreena Mckennitt
~Lyrics All Souls Night
Blessings and light
on
All Souls Night!
Posted by Cobalt Violet at Monday, October 31, 2011

You sure look glamorous in your photos. I always ended up dressing as a gypsy. But that was for carnival. We didn't do Halloween back then and it has not really caught on here ... yet.

Happy Halloween! I enjoyed looking at your photos of past costumes. Have fun in Italian class!

fun to hear and see about your past halloween's! Thank you for the music. Wishing you a graceful drive.

Hi Lucinda,
It is good to be back blogging again and to catch up with you here!
Your photos of Halloween past are such fun!
Your mum made great costumes. Unfortunately, I never went to many Halloween parties as a kid.

All Souls Night by Loreena is wonderful. I think it is one of her best songs. thanks for the video.
Happy Halloween!

Thanks for sharing - this year no Halloween party for us. Maybe next year - love the costumes - enjoy.

Thanks sweet ladies!!! :)
Hope you had a good Halloween and that November is off to a beautiful start!

Cutest little 'I dream of Jeannie' ever! Like you, we always made our costumes...gypsies, hobos, '50's girl, Gene Simmons from Kiss...what fun!

I am sure the great actress in you blossomed at halloween! Dressing up and morphing into character. :-)

wonderful costumes! Those are great fun. I love the Loreena McKennitt, too--she has such a beautiful voice.