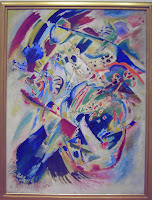 O.K. here's the thing. I am FREAKING out! There is going to be a HUGE Kandinsky retrospective at the Guggenheim in New York celebrating their 50th anniversary. Nearly 100 paintings and more than 69 works on paper including pieces from the Guggenheim, Pompidou in Paris, the Stadtische Galerie im Lenbachhaus (Munich) as well as other public and private collections.
There hasn't been a full scale retrospective of this magnitude since 1985. I won't say how old I was but I wasn't flying off to New York on my own at that age! (Plus, I have to say, at that point I was more of a Degas/Renoir kinda kid.) I am checking my United Miles and starting to conspire on ways that I can possibly get to see this exhibit. Can you tell I am passionate about him???
I talked to my friend Caroline, who completely gets it, and she said yesterday that she is feeling a gravitational pull to New York at the very thought. I think she is figuring out a way to go for business. Sigh.
The exhibit runs from September 18, 2009 until January 13, 2010. If you are on the Eastern Seaboard, have miles, extra cash or are independently wealthy, you are crazy to not head straight for the Guggenheim in N.Y.C. The paintings in this post are pictures I took a few years back at Museum of Modern Art in New York. They are from Kandinsky's "Four Seasons" and in person they are spectacular! The last photo is a detail.
Kandinsky 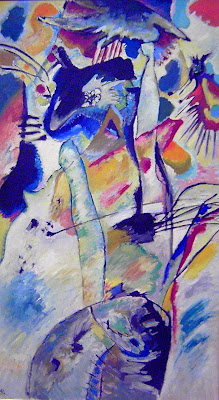 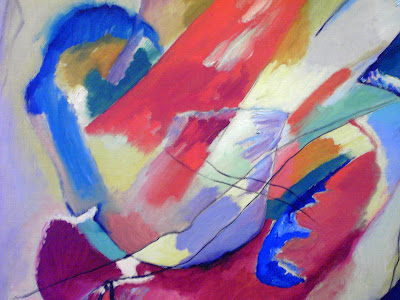