Inspiration at the Met

After walking through Central Park I had big plans. I would hit up the Metropolitan, have lunch, see some art, head to the Frick (which was having a drawing exhibition that looked great) and would make it back to my friend's apartment in time to meet up before we would all head to see the Broadway Musical, "Next To Normal." All of this, then of course, dinner.
It's the artistic equivalent to your eyes being bigger than your stomach. One can only do so much. And, frankly, at the Met there is already so much! You can't possibly do it all or even a fraction of it all, so you just have to surrender to it and enjoy being in the largest art museum in the Western World (it says so on a plaque in the lobby) and enjoy the amazing variety of what is offered up on an artistic silver platter. Everything you could ask for ...
Here is an example of the beautiful variety of art ...
Tiffany Window 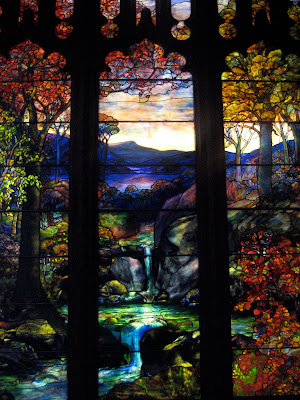 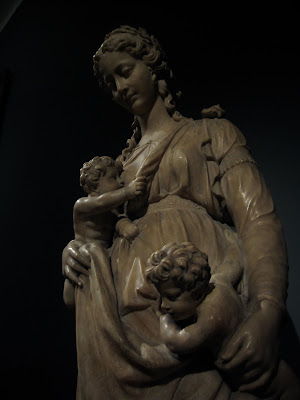 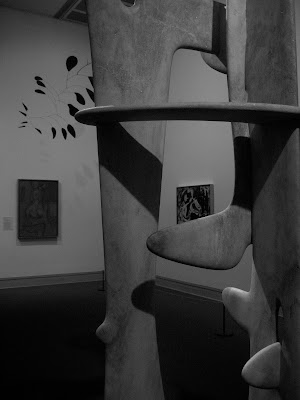 This (below) was a piece from a fantastic exhibit called "American Stories: Paintings of Everyday Life, 1765-1915." The painting is called "Making a Train" by Seymour Joseph Guy. I loved all the history in this exhibit and obviously I love art, so I ended up being in there for at least an hour and a half to two hours in my own little world with audio guide and notebook in tow! 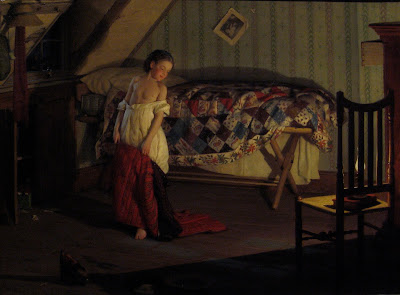 Detail of a Caravaggio ... I mean, seriously. 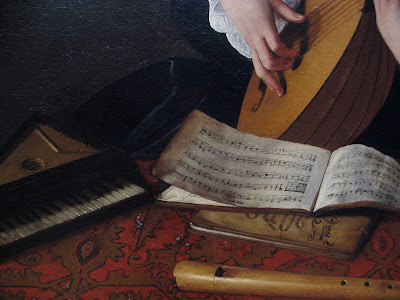 Of course, I never made it to the Frick. These were taken after dark, making my way through the Greek and Roman Wing on my way out. It was so beautifully lit and people were just sitting and sketching and enjoying each other and the amazing art. I however, was clipping along at a near gallop to get to coat check and in a cab so I could make it to the theatre.
I'd been at the Met for over five and a half hours. 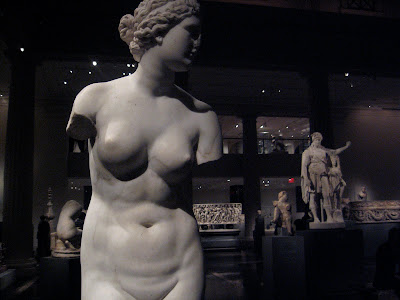 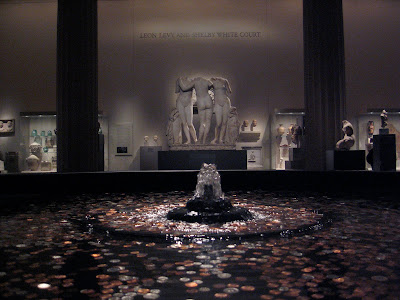 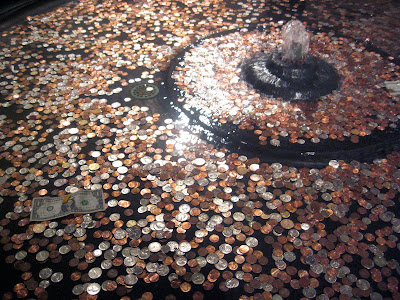 The play, Next to Normal, by the way, was fantastic. It was so emotional I was gulping for air, doing the ugly cry and trying not to do one of those huge gasping inhales. You know, when you are holding your breath and trying to hold it all in? (I did that in a huge Catholic Church at my friend Caroline's wedding. It echoed. It wasn't pretty.)
Next time, I will make it to the Frick.
Posted by Cobalt Violet at Monday, January 18, 2010

Thanks for taking me there. I don't get to the city much and miss seeing the great art. The Tiffany window is magnificent. Carravaggio mind boggling.

Sounds and looks very inspiring! Beware for the Stendhal syndrome ;)

i really like the stained glass window, that is a nice picture

This stained glass is very beautiful
I really like stained glass.
We thank you for sharing these beauties with us.
Thank you very much
best regards

The Tiffany stained glass is always so beautiful! There was an amazing show at the Met in 2007 of not only his amazing windows but his own paintings, as well as things he collected from all over the world. If there is ever another big Tiffany exhibit somewhere you can get to, I would highly recommend seeing it!

MMMMM. You've inspired me to get my BEE-hind to a museum, ANY museum. The Met would be nice.....