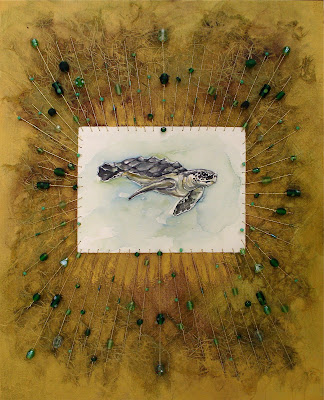 This is an endangered Kemp's Ridley sea turtle. It's one of 7 species of sea turtle, all of which are on the IUCN Red List and all classified as endangered or threatened by the U.S. Endangered Species Act. These creatures have been here since before the dinosaurs ... between 110 to 140 million years. Yes MILLIONS... crazy right? I swam with one in Hawaii, almost drowning from the complete and utter excitement of it. It was thrilling.
Leatherbacks could be gone in 10 years. Uh, huh. 10. For more information there are lots of websites and people doing a lot to help these guys out. Sea Turtle Restoration Project is just one of them and they have a lot of info on their site.
Posted by Cobalt Violet at Friday, July 31, 2009